In the early 20th century, Captain Jack Bonavita dazzled crowds with his ability to tame lions — until he was brutally killed by a polar bear. 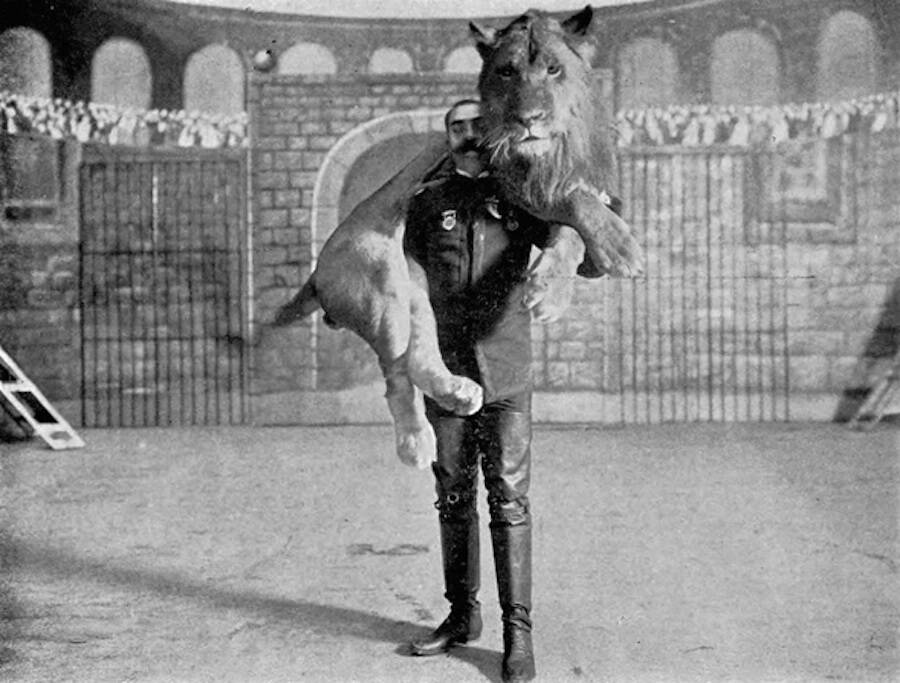 Project GutenbergCaptain Jack Bonavita posing with one of his many lions.

It was the turn of the century, and America had become a beacon of opportunity. Spectacle and sensation ruled the day, and circuses drew massive crowds. But no performer was bolder than the death-defying Captain Jack Bonavita.

He was one of many sensational performers at Coney Island’s Dreamland, a seaside amusement park that opened in 1904. But Bonavita was an attraction of his own. Dazzled crowds watched him steel himself inside of a metal cage with 27 lions ⏤ and survive.

But fate gruesomely tipped its hand one day in 1917 when Bonavita was attacked by an uncooperative polar bear. Though he’d experienced 50 attacks in his life, this one would prove to be his total undoing. 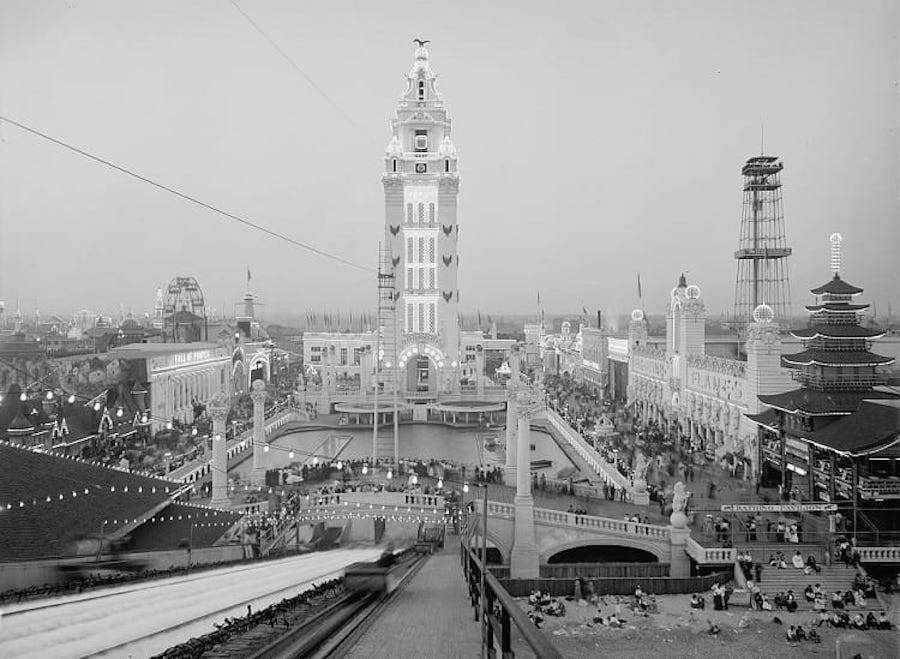 Library of CongressDreamland in 1905. The magnificent park closed in 1911 following a devastating fire.

But he vied for audiences against the work of Carl Hagenbeck, who had invented the modern zoo and showed his animals around the island as well. Reynolds competed with him by crafting Dreamland in an elegant design and hosting the most outlandish and obscene acts within it.

The park featured rides like “Coasting Through Switzerland,” which guided people through the makeshift landscape of the alps, and “Lilliputian Village,” an exhibit that consisted of 300 little people. 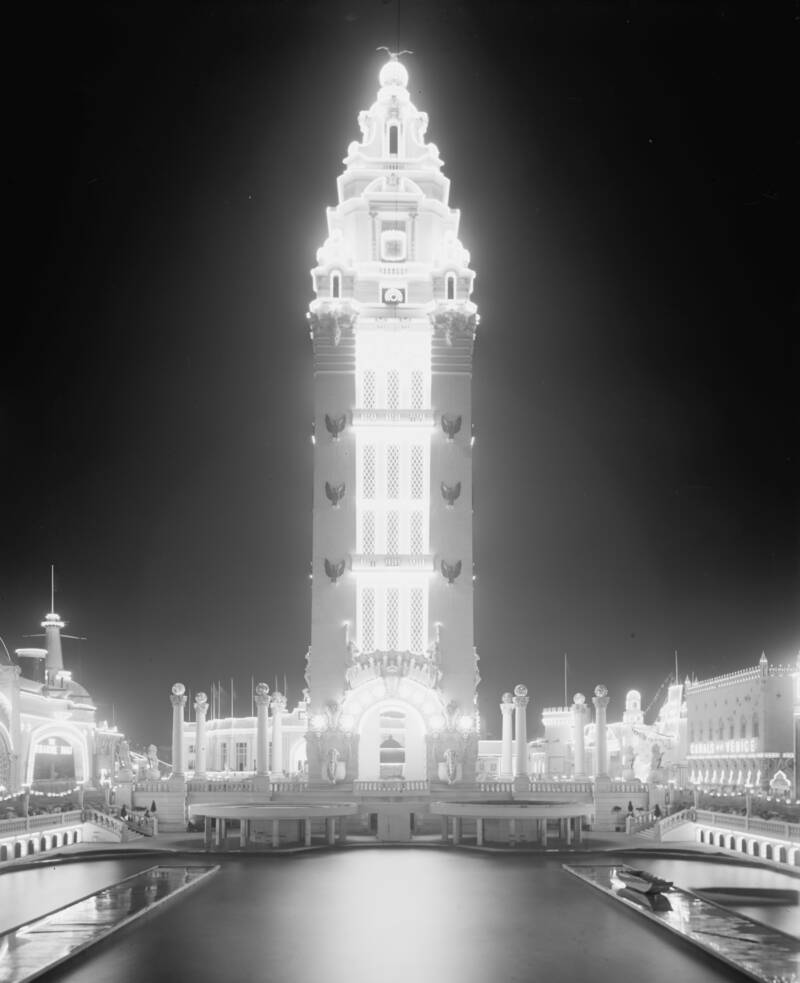 Library of CongressThe Dreamland tower, illuminated by one million lights.

There was also a display that showed off a real set of premature triplets and even an empty six-story building that was set ablaze and extinguished every half hour by pretend-firemen.

But then, there was Captain Jack Bonavita. 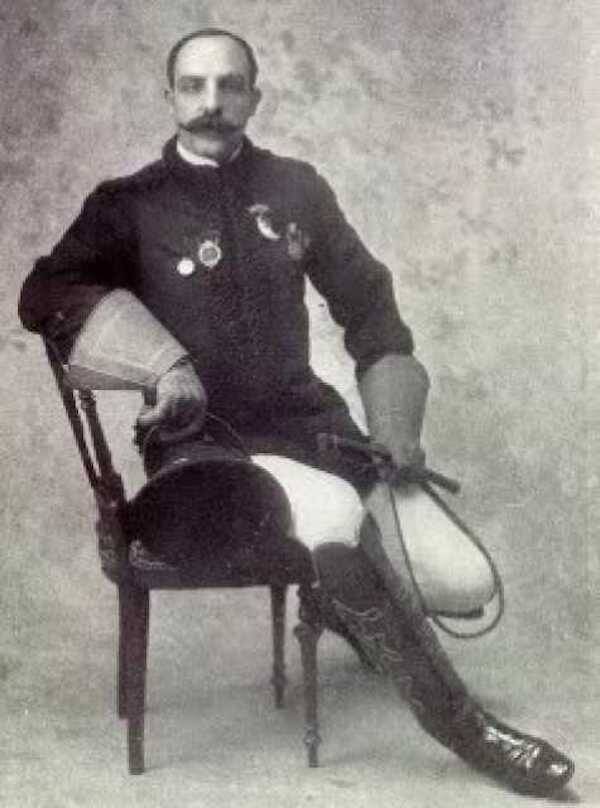 Project GutenbergCaptain Jack Bonavita before his amputation in 1905.

Johann Friedrich Gentner, a.k.a. Captain Jack Bonavita, was born to a Dutch family on Dec. 15, 1866, in Philadelphia, Pennsylvania. Daring and athletic from an early age, he became a circus acrobat in the heyday of sideshow and circus pioneers like P.T. Barnum.

Bonavita’s transition from acrobat to animal trainer was rather swift. It was generally believed that wild animals would do a performer’s bidding if he had trained them well enough. Thus, Bonavita ventured into this territory rather quickly and found himself regularly engaged in the arena with big cats.

His bravado and appearance certainly impressed the crowds. Standing at five-foot, 11 inches, with a dark handlebar mustache, and outfitted in a military-style uniform that was filled out by his big chest, Bonavita drew crowds as much for his looks as he did for his skill in commanding animals.

Indeed, the lions seemed to fully follow his orders during acts like “The Arm-Chair,” in which Bonavita sat in a chair and ordered 13 lions to sit around him. He became known as the “lion-whisperer,” but even his extensive training couldn’t prepare him for what happened when his charm over the lions failed one day.

The Lion Attack That Took His Arm 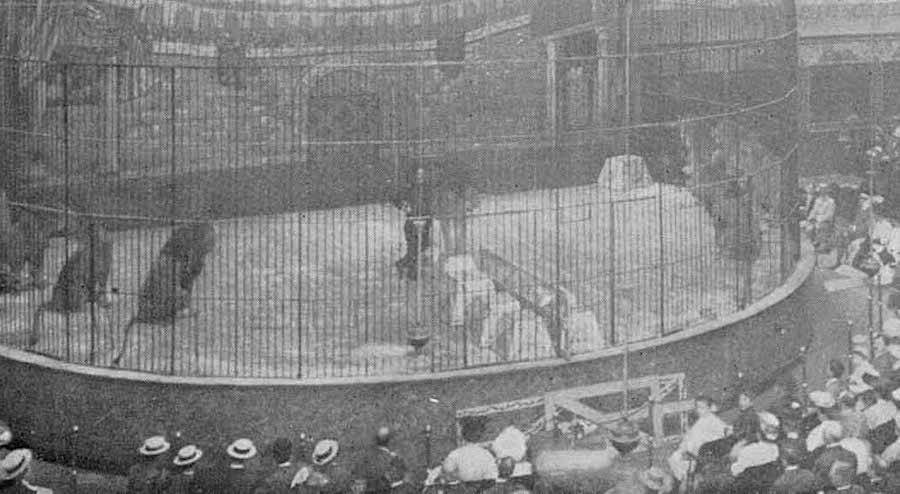 Heart Of Coney IslandBonavita performs for a crowd on Coney Island. He once stepped into a cage of 27 lions, a feat that was not yet done before.

The few documented accounts of that bloody day on July 31, 1904, differ. The New York Times and Sacramento Union reported that Bonavita’s incident occurred in Coney Island, but an occult figure and palmist famous at the time named Cheiro claimed it happened in Paris.

According to Cheiro, Bonavita was giving a performance at the Moulin Rouge in the City of Lights. He was performing his opening act — that of getting a lion named Baltimore to sit on a chair — when he turned away for a moment too long. Suddenly, the animal pounced on him.

Princess of Montglyon Rosalie F. Mercy d’Argenteau of Belgium had been in attendance that night and immediately rushed over to the steel cage to prod the lion with her parasol. She had become enamored with the great American lion-tamer and distracted the animal as people carried Bonavita to safety.

It was too late, however, as his entire left shoulder and arm were mauled to shreds. Two of his fingers had been mangled entirely. 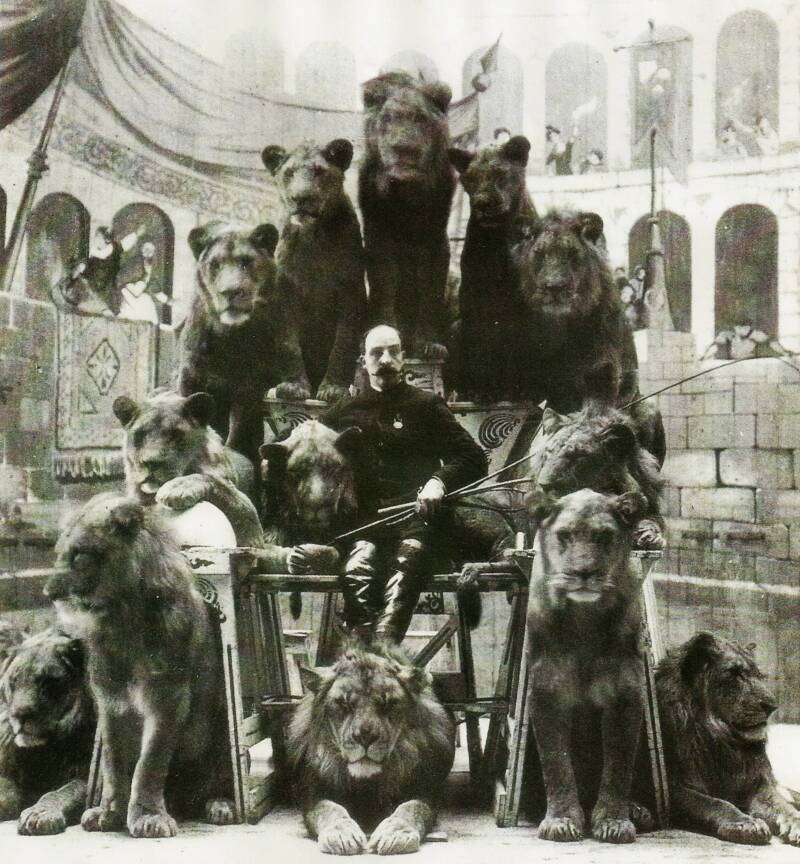 FacebookBonavita and his famous armchair act in action.

The noblewoman joined Bonavita in the ambulance and stood by him as he recovered. Determined to remain able-bodied, Bonavita refused amputation for eight months.

As Cheiro tells it, he finally accepted that he was risking death by infection, and had his arm amputated in February 1905. But there was a silver lining to the tragedy. The princess and the lion tamer had fallen in love during this volatile period and married on April 25, 1905.

The union didn’t last long, however, and Bonavita divorced d’Argenteau in 1907. 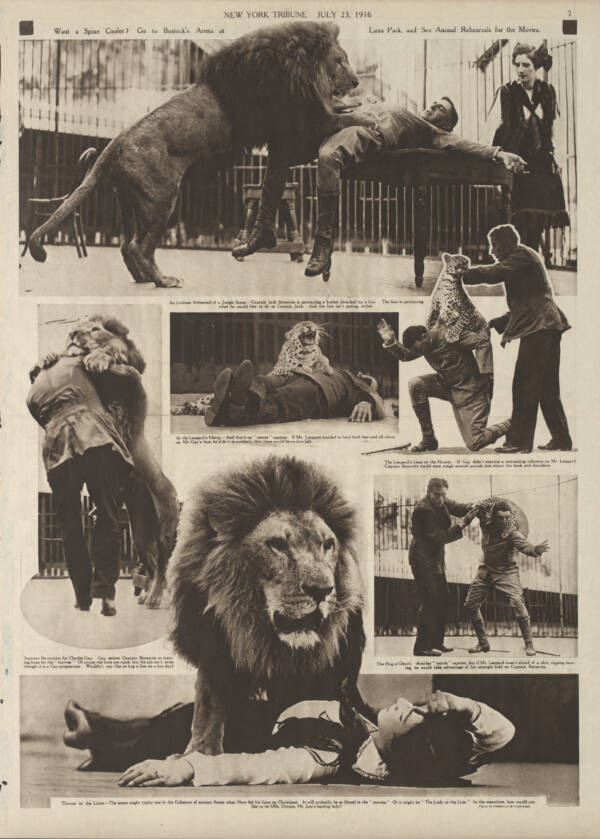 In yet another account of his mauling, which claimed Bonavita was hurt on Coney Island, he was aided by another woman. In this account, Broadway actress Marie Dressler purportedly brought watermelon slices to the Reception Hospital room in Brooklyn every day until he recovered.

In all the stories, however, Bonavita was left a one-armed lion tamer — but one determined to forge ahead in his dangerous career nonetheless.

The Curtains Close On The One-Armed Lion Tamer 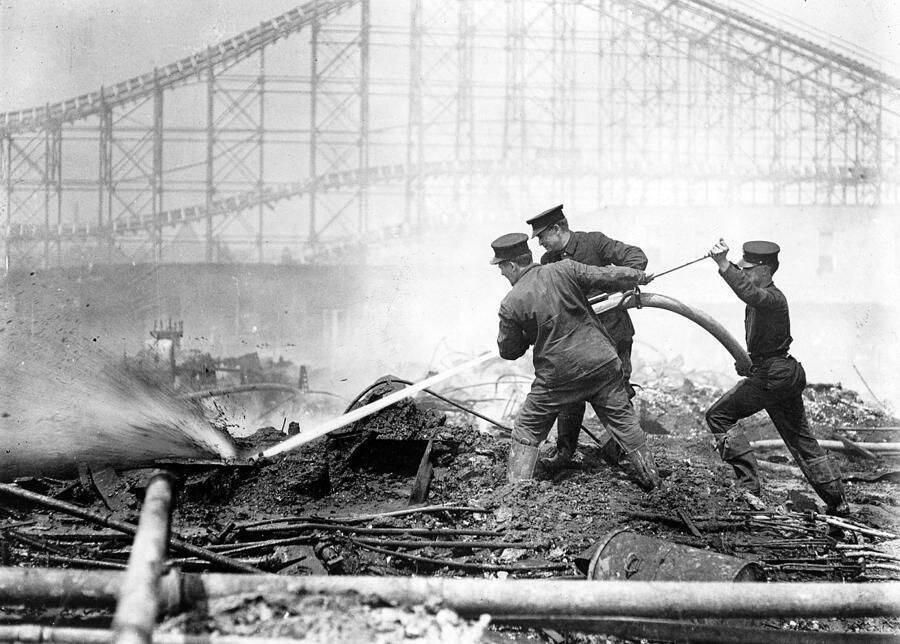 PinterestThe aftermath of the 1911 Dreamland fire.

Bonavita continued to work at Dreamland until May 27, 1911, when a new ride called “Hell’s Gate” malfunctioned and caught on fire. Then, a worker accidentally kicked over a can of tar, which made the lights nearby explode. The entire amusement park burst into flames.

Tragically, 60 animals perished in the blaze. Though Bonativa ran back into the fire to save his lions, he largely failed. One of his lions, Black Prince, had panicked and run into the street where a police officer fired six bullets into his mane. Dreamland crumbled into ash, and Bonavita’s career seemed doomed.

Fortunately, his skills were in high demand in Hollywood. Bonavita then led an extensive film career as an animal trainer, stuntman, actor, and director. 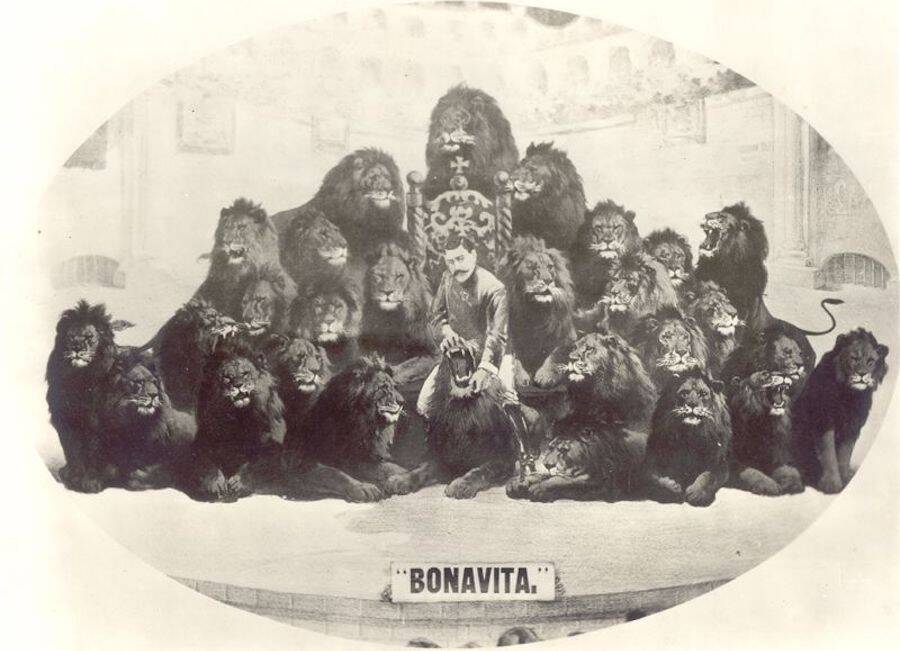 FacebookA souvenir image of Bonavita in his element.

In the end, Captain Jack Bonavita died doing what he loved. Though he was mostly training animals for producer David Horsely, he was also working for Bostock’s Circus. On March 19, 1917, a polar bear at that circus attacked him, fracturing his jaw and gashing open his face.

Variety reported on March 23 that “Capt. Jack Bonavita, the animal trainer, was clawed to death at the Bostock animal farm Monday. He was training a vicious polar bear when the animal turned and attacked him. A fellow trainer ran two blocks for a policeman, who fired three shots at the bear, killing him.”

Bonavita was, in part, a product of his time. He believed controlling wild animals like lions and bears appeared possible through sheer force of will, and for a time, it was possible for him.

Perhaps it’s unlikely that a man who called himself Captain Jack Bonavita would deem any other kind of life worth living at all, anyway.

After learning about Captain Jack Bonavita, check out 36 vintage photos from the early days of the circus. Then, take a look at 44 colorized photos that bring century-old New York City to life.