The Unsolved Mystery Of The Carancas Meteorite Sickness

Hours after the meteorite crashed near the remote Peruvian village in 2007, hundreds of people began reporting unexplained symptoms. 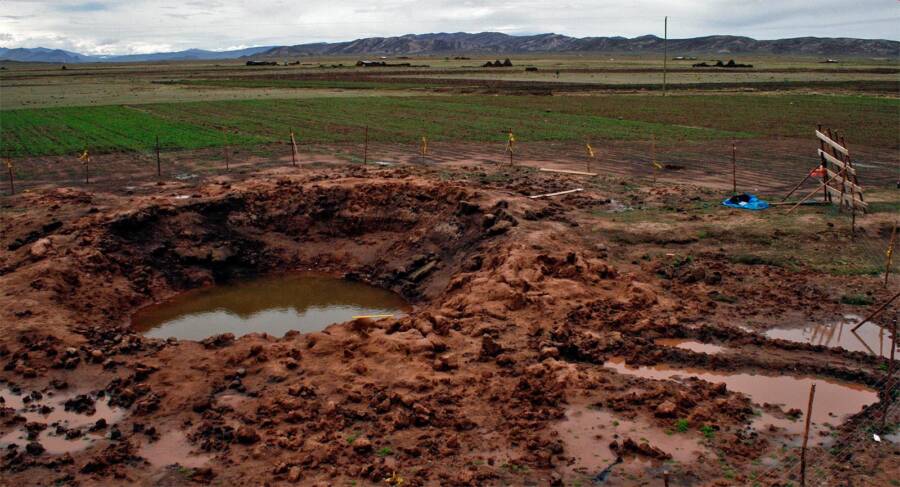 The Carancas meteorite has puzzled space experts ever since it first landed in the high alps of Peru in 2007.

How the meteorite was able to reach Earth without burning up and the mass illness that inexplicably swept a nearby village afterward both remain mysteries over a decade later.

Listen above to the History Uncovered podcast, episode 4: Plague & Pestilence – The Carancas Meteorite Sickness, also available on iTunes and Spotify. 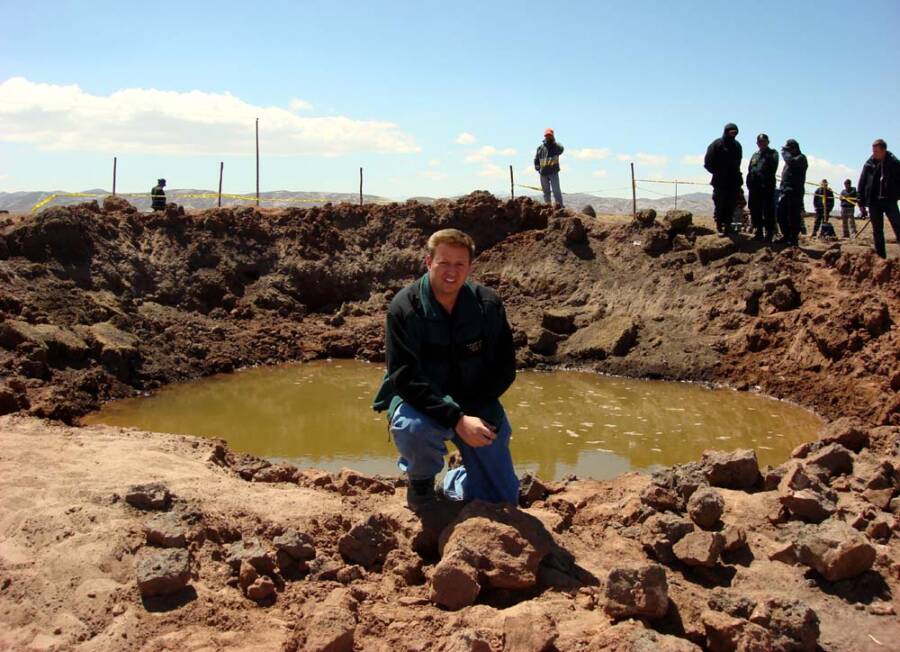 Michael Farmer/meteoriteguy.comMeteorite hunters like Michael Farmer came from around the world to gather fragments of the unusual space rock.

On Sept. 15, 2007, the tiny village of Carancas in the remote highlands of Peru received an unexpected visitor that left villagers and local authorities bewildered.

At first, locals who came to inspect the mysterious crash didn’t find anything except a 20-foot-deep, 98-foot-wide crater that the meteorite had dug in the Earth. It quickly filled with groundwater from the area’s shallow water table.

The space rock turned out to be a meteorite — more specifically a chondrite — the size of a small dining table that possibly weighed 12 tons. An analysis of fragments from the space rock found minerals like olivine, pyroxene, and feldspar.

Before it landed at 11:45 a.m., witnesses say they saw the fiery rock cross the skies. Evidently, it burned bright enough to be visible to the residents of Desaguadero, a city located 12 miles north of Carancas, in the middle of the day.

Scientists determined the meteorite had made its way from an asteroid belt roughly 110 million miles away from our planet, floating between Mars and Jupiter. It was one of the largest meteorites to land on Earth in recent memory. 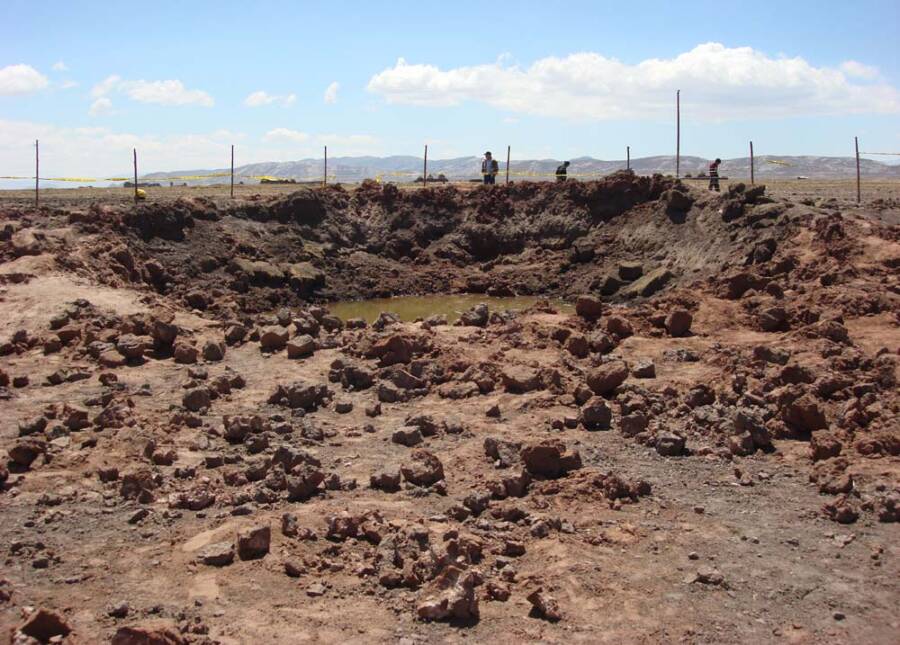 The meteorite was traveling an estimated 10,000 miles per hour when it struck the Earth. Vibrations from the crash were picked up by an infrasound monitoring station all the way in neighboring Bolivia.

Most remarkably, its discovery debunked the belief among planetary geologists that a chondrite-made crater was impossible. Some experts initially dismissed claims that it was a chondrite before analysis by local scientists confirmed the suspicions.

Conventional wisdom assumed that most meteors break into fragments and fizzle out before they can even reach the Earth’s surface. But the meteorite that landed in Carancas seems to have inexplicably remained intact.

“This meteor crashed into the Earth at three kilometers per second, exploded, and buried itself into the ground,” said Peter Schultz, a professor of geological sciences who visited the site two months after the incident. “Carancas simply should not have happened.”

The Carancas meteorite is the only known chondrite impact of its kind in recorded history. Although the chondrite crater puzzled scientists, other events surrounding the crash added to the mystery. 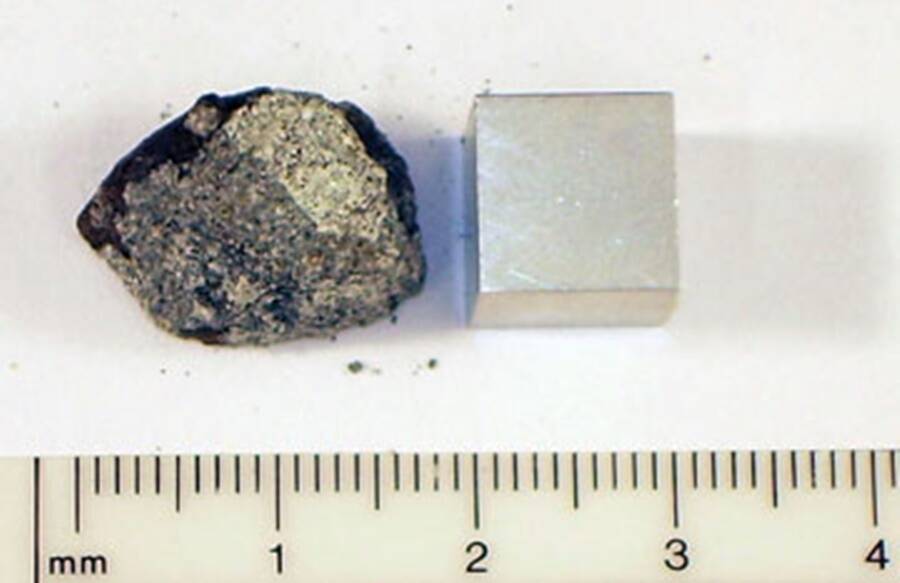 Dolores HillScientists from other cities descended on Carancas to collect samples of the meteorite, such as this one.

Due to the isolated territory of Peru’s altiplano, the first people who arrived onto the scene of the Carancas meteorite impact were the locals.

Gregorio Urury, a farmer in Carancas and a member of the area’s indigenous Aymara nation, was among the first to see the crater.

Sensing that the incident was something best reported to authorities, Urury drove a neighbor’s motorcycle to Desaguadero to alert the local police. By the time Urury had returned to the crater site with the police, dozens of villagers had gathered around the site.

Curious about the new crater with its meteorite submerged underwater, the locals collected rock fragments that had broken off from the meteorite.

According to witnesses, the water in the crater was boiling hot and a strong sulfur smell spread in the air around it. The black fragments they picked up also seemed to be emitting smoke.

Hours later, the first reports of people in the village falling ill began to emerge. Many like Urury, whose son had called from the city of Tacna and warned his father not to touch the rocks due to possible contamination, began to suspect the meteorite may have had an effect on residents’ health.

Rumors swirled that the meteorite fragments, which many locals had collected, were somehow toxic or even cursed. Locals began to complain of nausea, dizziness, headaches, and vomiting without any clear cause. Nearby hospitals were soon full of those who had mysteriously fallen sick.

“Lots of people from the town of Carancas have fallen ill. They have headaches, eye problems, irritated skin, nausea, and vomiting,” Nestor Quispe, the mayor of the municipality to which Carancas belongs, told the BBC. “I think there’s also a certain psychological fear in the community.”

Even more disturbing were news reports of livestock bleeding from their noses, some of which died. Villagers feared that their local water supply was no longer safe to drink.

“This is the water we use for the animals, and for us, for everyone, and it looks like it is contaminated,” Romulo Quispe, a resident of Carancas, said. “We don’t know what is going on at the moment, that is what we are worried about.”

According to a report by Andina, Peru’s official government news agency, a total of 200 people exhibiting various symptoms were examined by doctors while blood samples were taken for analysis from 15 patients who were believed to be closest to the meteorite.

Theories Behind The Carancas Meteorite Sickness 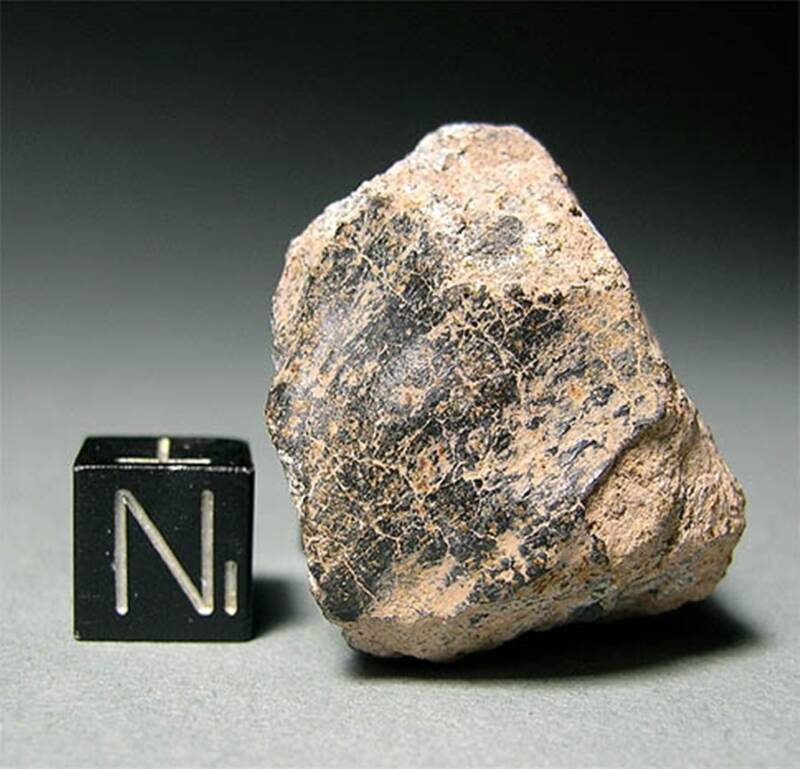 Superstitions revolving around celestial bodies stretch back to ancient history among different cultures.

The Aztecs associated the god Quetzalcoatl with the planet Venus, which they believed predicted the future, while Romans attributed victory over Hannibal to their possession of a meteor fragment they revered as the “Needle of Cybele.”

In ancient Greek and Chinese historical records, events of “falling stones” were well documented and were believed to influence the affairs of the world.

These beliefs faded as medieval theology and science — which condemned the existence of cosmic influence — advanced. It was not until the early 18th century that society would once again look to the stars in our quest to understand the world.

Carancas Mayor Maximiliano Trujillo suspected the supposed ailments were at least partially caused by superstition, so he convened a public meeting with about 800 people — the largest ever held in the village — to hear explanations from scientists about the meteorite.

But some were still unconvinced, choosing to believe that the space rock had been summoned by the gods as a bad omen for the future. The Carancas mayor implemented two separate measures to alleviate the community’s concerns. 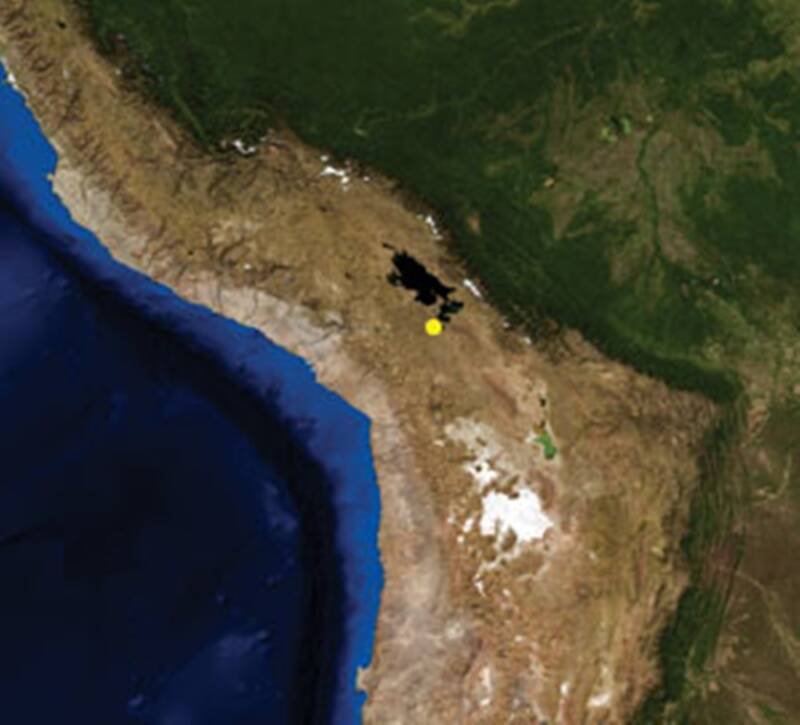 AGI/NASAMap of the location of the meteorite’s landing in the Peruvian alps.

Mayor Trujillo asked Marcial Laura Aru­quipa, one of the last two shamans left in the village, to perform a ritual sacrifice in the hopes of convincing residents that the meteorite did not pose any danger. Aruquipa obliged, offering up a baby llama.

To keep people safe from further effects from the meteorite, Trujillo also built a fence around the crater that remained guarded for several weeks.

In the early days after the crash, theories abounded online linking the meteorite to potential extraterrestrial activity, but they seem to have been debunked.

Experts later determined that the likely cause of the mysterious Carancas meteorite illness was arsenic that had seeped into the groundwater and vaporized upon impact. The arsenic entered the air as a gas and caused those nearest to the meteorite to become sick.

Although the theory sounds reasonable enough, other experts have pointed out that meteorites that crash into Earth are not typically found emitting a high temperature or any odor as witnessed by locals with the Carancas meteorite.

The case, though considered closed by some, remains an enigma to others.

Next, learn about Earth’s oldest-known meteor crash site discovered in the Australian outback and read about a frozen meteor that turned out to be frozen feces from a passing airplane.