With an arsenal of homemade bread, the anti-feminist Phyllis Schlafly mobilized thousands of women like her to champion conservative causes.

In the 1960s and ’70s, Phyllis Schlafly brazenly carved a reputation for herself out of male-driven conservative politics, but not as a champion for women’s rights — as an opposer.

Schlafly was an effective political operative for the Republican Party and was even once hailed by a right-wing heretic as “the first lady of the conservative movement.” She used her voice to condemn feminists and the women’s liberation movement.

So who was this contradictory conservative? 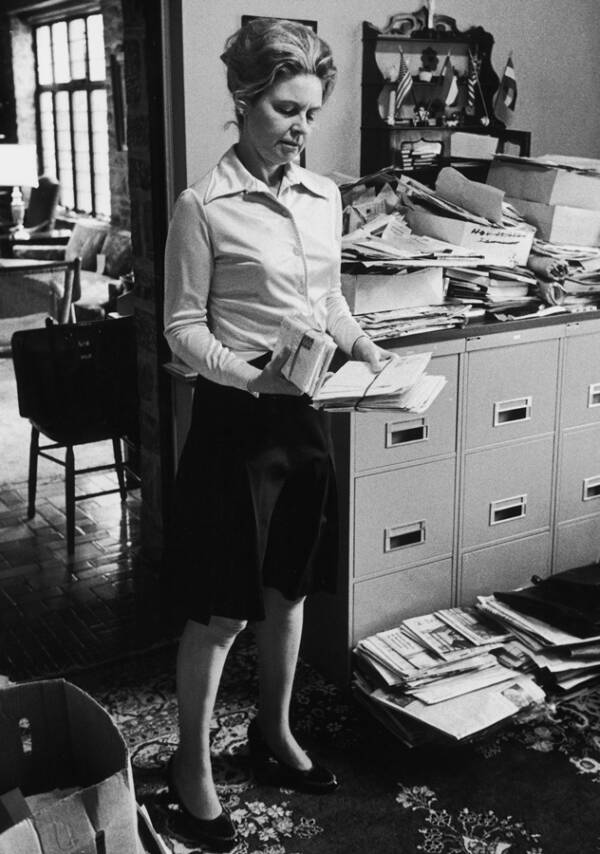 Michael Mauney/The LIFE Images Collection via Getty ImagesPhyllis Schlafly grew up in a deeply conservative household where her mother was the family breadwinner.

Phyllis Schlafly was born Phyllis McAlpin Stewart on Aug. 15, 1924, in St. Louis, Missouri. Her mother, Odile Dodge, was a teacher and her father, John Bruce Stewart, was a machinist and industrial parts salesman.

The Stewarts struggled with money but her mother, holding two college degrees and high aspirations for her daughters, became the breadwinner. She worked multiple jobs as a department store clerk and a librarian at the St. Louis Art Museum.

Despite the family’s economic struggles, Schlafly’s father was a staunch Republican who opposed the New Deal, which was a set of federal programs enacted by President Franklin D. Roosevelt to boost the US economy following the Great Depression.

Schlafly later attended Maryville College of the Sacred Heart in St. Louis — now Maryville University — before she transferred to Washington University. She was a diligent student who did little socializing outside the classroom. When she wasn’t busy with school work, Schlafly worked night shifts at the munitions factory.

She graduated as a member of Phi Beta Kappa in three years and through a scholarship, went on to pursue a master’s degree in political science at Radcliffe College, a liberal arts college now part of Harvard University in Cambridge, Massachusetts.

It was during her time as a graduate student that Phyllis Schlafly began to show her ambitions for politics. 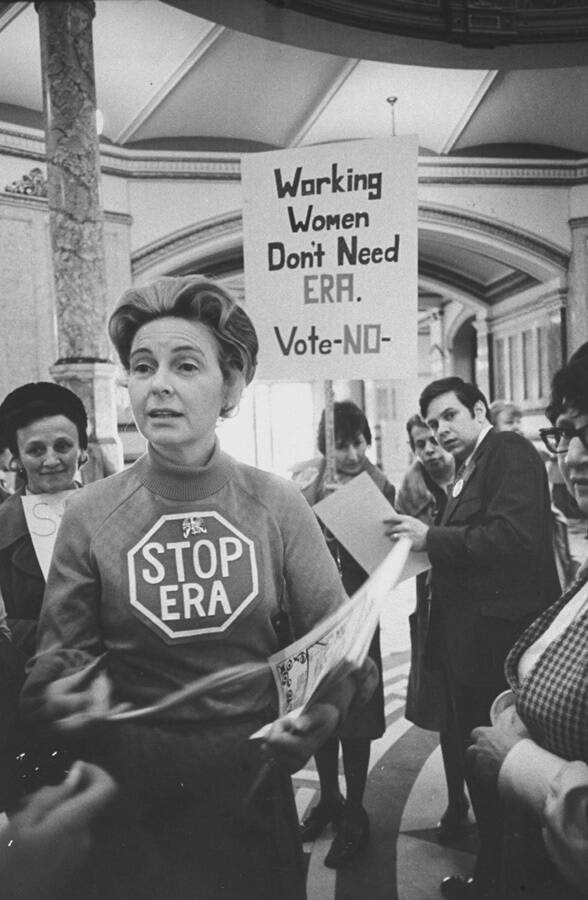 Michael Mauney/The LIFE Images Collection via Getty ImagesBy the 1960s, Schlafly was a formidable political operative for the Republican party.

Schlafly devoured conservative literature during this time, writing essays in opposition to the New Deal that no publication was interested in publishing. In 1946, she returned to St. Louis where she became involved in the campaign of Republican candidate Claude I. Bakewell who ended up serving two terms in the U.S. Congress.

Not long after this at age 25, Schlafly married John Fred Schlafly Jr., a 39-year-old conservative lawyer whose family made their fortune in banking and industry.

Schlafly’s marriage to a wealthy lawyer allowed her the freedom to pursue her own projects, like campaigning for conservative policies, which were typically antifeminist in their nature. The privilege she enjoyed because of her wealthy husband was frequently used against her by her critics.

As journalist Gail Sheehy wrote in the New York Times in 1980: “Phyllis Schlafly’s formula for the better life, then, is based on marrying a rich professional, climbing the pedestal to lady of leisure and pulling up the rope ladder behind her.” 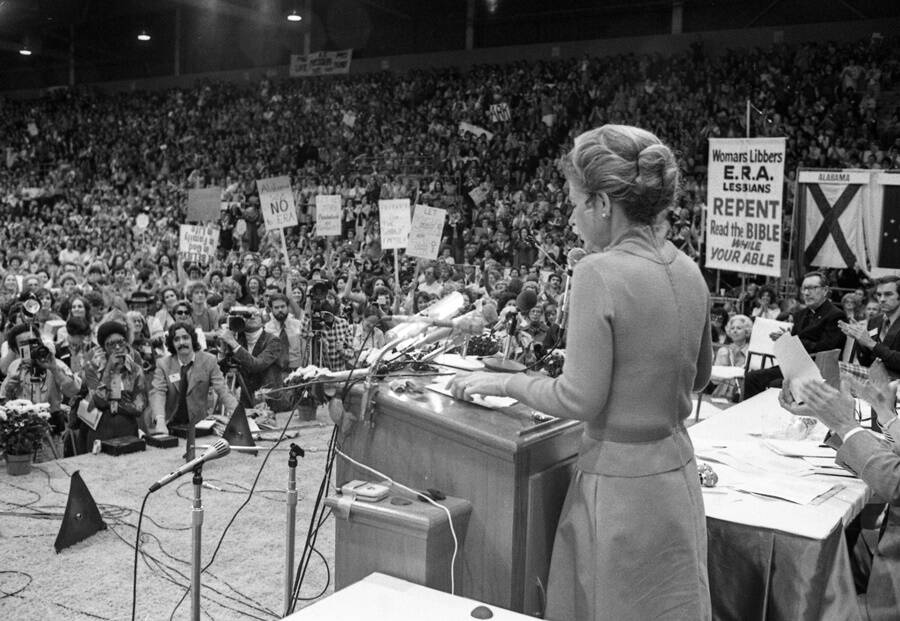 By 1952, Phyllis Schlafly believed she had gained enough experience as an activist to throw her hat in the ring to become a political candidate herself. She ran for a congressional seat in her husband’s stead after he turned down Republican requests to run for office.

Schlafly espoused conservative ideas like anti-Communism, an anti-globalist approach to national security, and anti-reproductive rights. She lost the general election but the experience served as a warm-up for her coming decades in political activism. She would later prove lethal against her liberal rivals.

She became an active officer of the Daughters of the American Revolution (DAR), sat as president of the Illinois Federation of Republican Women, and, along with her husband, co-founded the Cardinal Mindszenty Foundation which focused on stemming Communism.

Schlafly successfully built a formidable network of incensed homemakers inside the conservative sphere who opposed the women’s liberation movement. Her outreach was only lengthened by her elevated status as a media personality. In 1962, she hosted a 15-minute local radio show called America Wake Up and two years later self-published her book A Choice Not an Echo.

The book sold three million copies nationwide and is considered to have been a vital component in helping presidential candidate Senator Barry Goldwater secure the Republican nomination in the 1964 election.

Phyllis Schlafly’s Fight Against The ERA 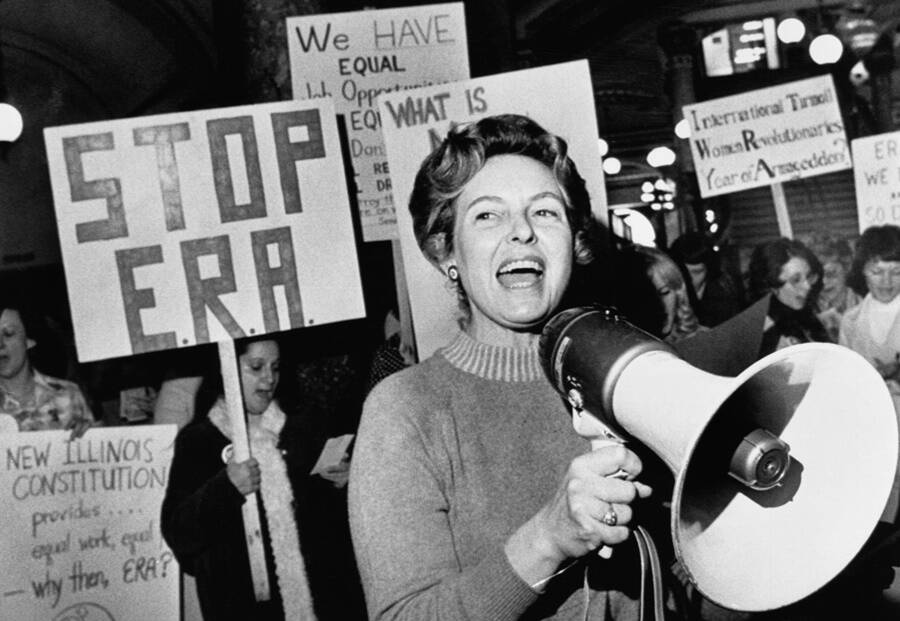 By the early 1960s, Phyllis Schlafly was a household name among Republicans. She continued to lobby for conservative policies and turned her attention to the looming threat of nuclear war. She reportedly called the atom bomb “a marvelous gift that was given to our country by a wise God.”

By the time the ’70s rolled around, second-wave feminism was in full steam. Feminists like Gloria Steinem, Shirley Chisholm, and Betty Freidan led the charge for women’s liberation through the National Women’s Political Caucus and were working tirelessly to pass the Constitutional Amendment known as the Equal Rights Amendment (ERA) which would ban gender-based discriminations legally, in the workplace, and elsewhere.

Schlafly paid little attention to the ERA until one of her friends asked her to debate the issue against a feminist activist.

After reading up on the amendment, Phyllis Schlafly decided to take on the cause to fight against its ratification. She claimed the amendment was actually dangerous to women’s freedoms as it would cut how much financial child support they could receive and included them in the military draft.

Phyllis Schlafly in an interview with Barbara Walters in 1972.

“I simply didn’t believe we needed a constitutional amendment to protect women’s rights,” Schlafly said in a 2006 interview. “I knew of only one law that was discriminatory toward women, a law in North Dakota stipulating that a wife had to have her husband’s permission to make wine.”

In 1972, Phyllis Schlafly formed the volunteer organization called STOP ERA — which is now known as the Eagle Forum — to coordinate a national campaign against the amendment. 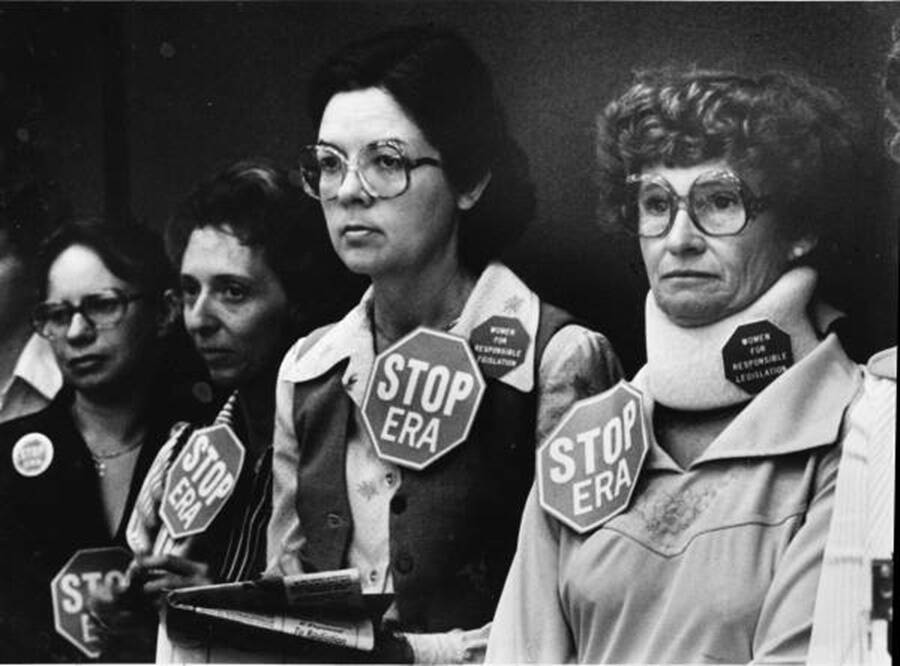 Wikimedia CommonsOpponents of the ERA wait to see how their state voted on the amendment’s ratification.

Schlafly obtained a large following of conservative white women through a monthly newsletter, direct mail campaigns, phone banking, and mass rallies on the steps of the Capitol.

Many believe Schlafly’s army of right-leaning female volunteers was instrumental in stalling the amendment. Only 35 state legislatures — three states shy of the number required to adopt the amendment — voted in support of it in the end.

The ERA’s shocking failure to pass was largely galvanized by Phyllis Schlafly’s campaign and the story was retold in the new 2020 series Mrs. America, a docudrama collaboration between Hulu and FX. 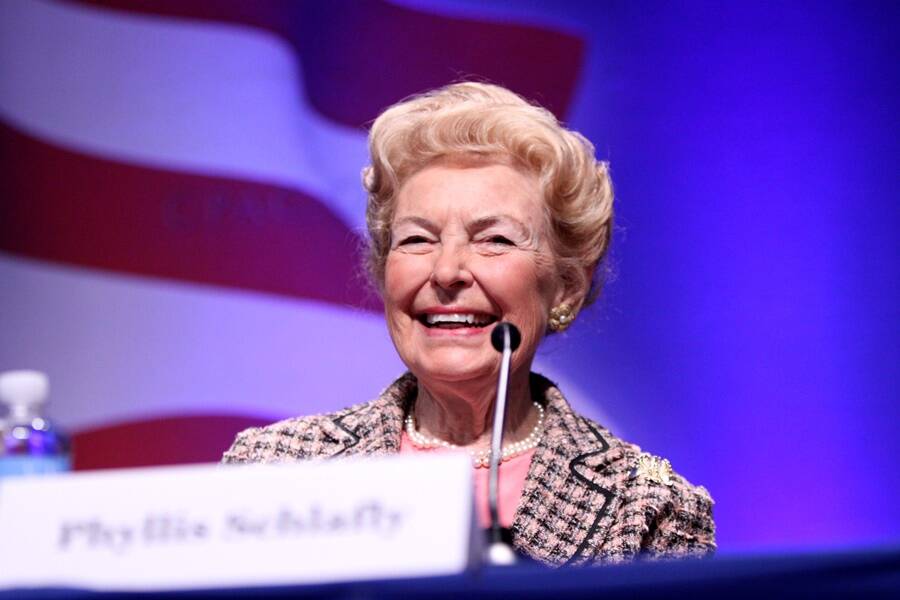 Wikimedia CommonsSchlafly passed away in 2016 after endorsing Donald Trump for president. He spoke at her funeral.

Phyllis Schlafly went on to write and edit more than 20 books and was a frequent commentator on major networks like CBS and CNN. Still, she never secured an official position in the Republican administration.

Fans of Schlafly praised her political savvy. She “dressed up the conservative movement for success at a time when absolutely no one thought we could win,” conservative theorist Paul Weyrich noted.

Even her critics had to commend her powers of persuasion. “If political influence consists in transforming this huge and cantankerous country in one’s preferred direction…Schlafly has to be regarded as one of the two or three most important Americans of the last half of the 20th century,” wrote political scientist Alan Wolfe, who was then quick to add that her ideas were also “dangerous and hateful.”

Despite her neatly groomed appearance and privileged pedigree, Schlafly had an unrivaled knack for rabble-rousing. She enjoyed “irritating women libbers” by starting off her speeches with a thank you to her husband for allowing her to be there.

She once said that “sexual harassment on the job is not a problem for virtuous women” and suggested that “sex-education classes are like in-home sales parties for abortions.” Schlafly also denied that marital rape existed and instead insisted that “by getting married, the woman has consented to sex, and I don’t think you can call it rape.”

Although Mrs. America has largely received praise for its gripping retelling of the clash between the anti-ERA campaign and the feminist movement during the 1970s, some have criticized the show for being too reluctant to reveal more of Schlafly’s less palatable qualities. 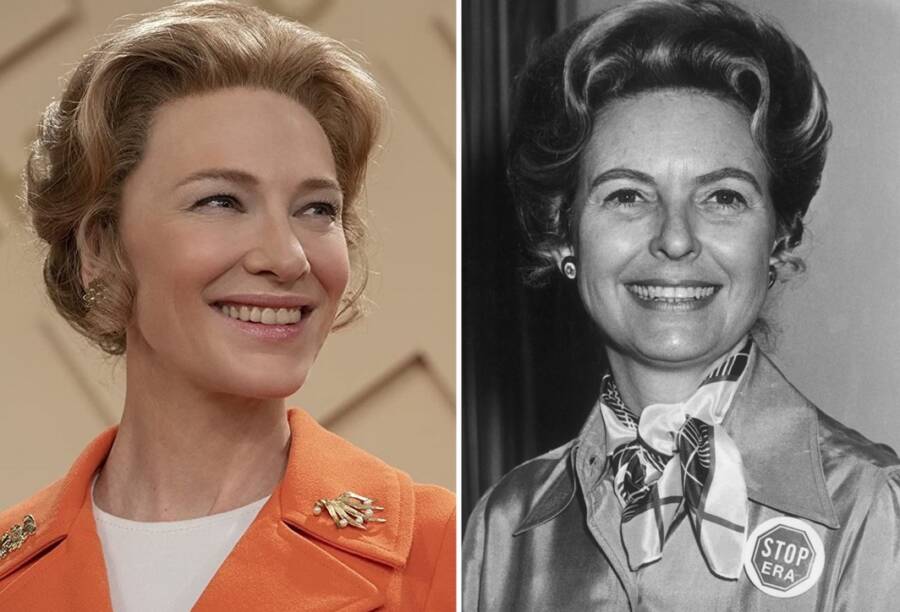 Schlafly is publicly known for espousing bigoted views on immigration and was allegedly a member of the notoriously radical far-right John Birch Society, of which she denied ever being a part.

Even when Schlaffly’s son, John, was outed by a queer magazine in 1992, she maintained her staunchly homophobic stance on same-sex marriage. “Nobody’s stopping them from shacking up,” she said in a 2010 interview. “The problem is that they are trying to make us respect them, and that’s an interference with what we believe.”

Cate Blanchett has been largely commended for her portrayal as Schlafly in Mrs. America.

“I don’t believe in demonizing anybody,” said actress Cate Blanchett who portrays Schlafly and joined the series as an executive producer.

Blanchett admitted, however, that her own mother had reservations about her playing a figure who was so deeply regressive in regards to women’s rights. But the actress argued that “we are all full of contradictions and hypocrisies. No one is perfect, including Phyllis, although her hair was mostly always perfect.”

One of Schlafly’s last public works before her death was a book titled The Conservative Case For Donald Trump, which endorsed Trump’s 2016 presidential bid. When she passed away before the election, Trump spoke at her funeral.

Schlafly was no doubt a gifted orator and political strategist, but she is most remembered for having used those skills to espouse anti-feminist ideas and to mobilize women to stall the Constitutional rights of their own sex.

Now that you’ve met Phyllis Schlafly, the right-wing activist who led conservative women against the ratification of the Equal Rights Amendment, take a peek at these vintage anti-suffrage posters that reflect the period’s normalized misogyny. Then, learn about Sorosis, the first women-only club in America.