Sorosis: The NYC Women-Only Club That Started A National Movement

After being rejected by their male literary peers, women writers of New York City joined forces to create their own club called Sorosis — where men weren't allowed. 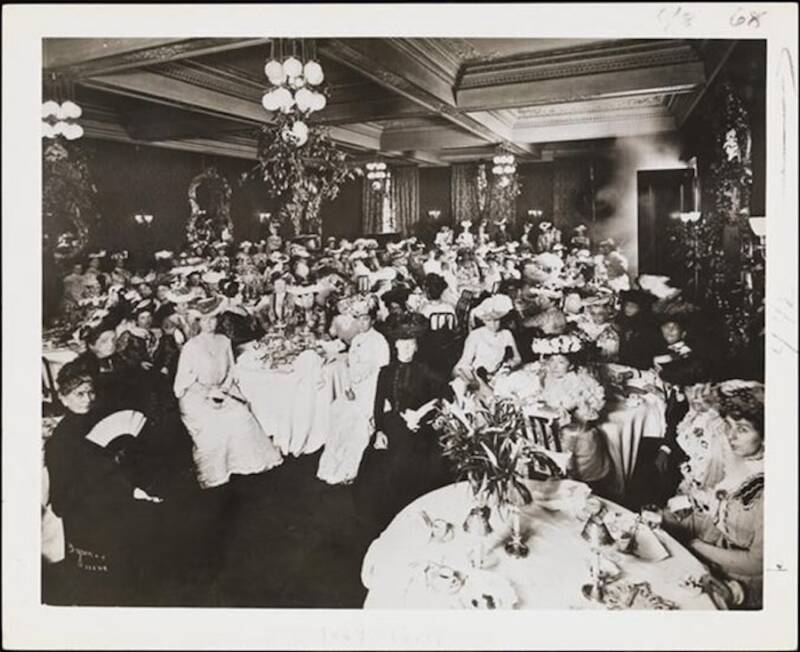 The Museum of the City of New YorkSorosis, started in New York City in 1868, was the first all-women’s club in the United States.

In 19th-century America, women were expected to be mothers and homemakers — nothing more.

Those who pursued professional careers often faced relentless challenges in their field, stemming from deeply ingrained gender discrimination. But after the women’s suffrage movement began in earnest in 1848, women began staking their ground.

Many of them created women-only clubs, gathering where professional and non-professional women alike could network, socialize, and educate themselves. The first among them was Sorosis.

The Conception Of Sorosis 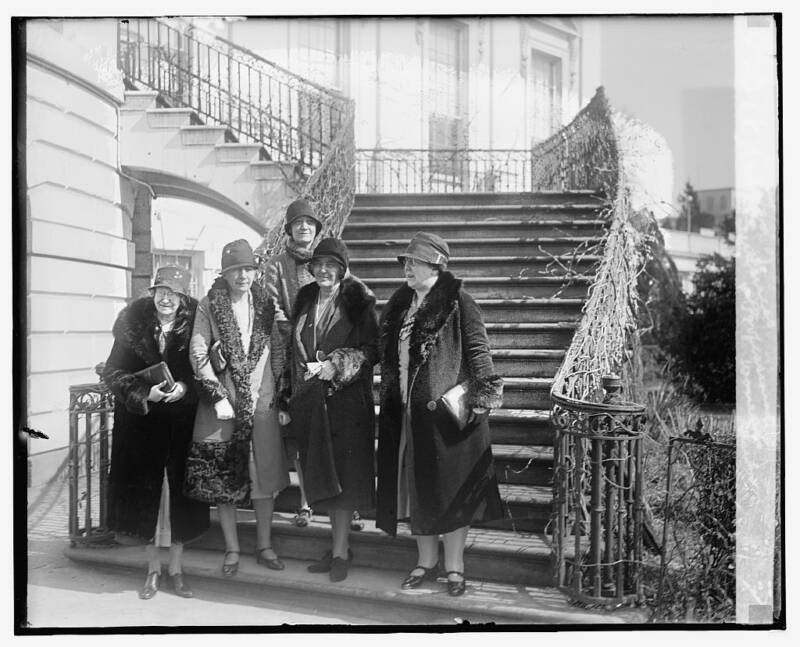 Library of CongressA few members of the National Federation of Business and Professional Women.

Jane Cunningham Croly was a highly accomplished journalist and author in New York City. After joining the staff of the New York Tribune in 1855, she became was one of the first women to write a syndicated column.

Because of her gender, Croly was forbidden from writing about science, literature, theatre, art, or music; she had to write about gossip. For “Gossip with and for the Ladies” she was paid three dollars per week, for “Parlor and Sidewalk Gossip,” under the pen name Jennie June, she was given five dollars per week.

By 1868, Croly was a respected writer and member of the New York Press Club. But that year, when she sought to attend a Press Club banquet honoring Charles Dickens, she was denied a ticket.

It wasn’t just her. The Press Club had decided to bar all women from the event.

After much protest from the women writers, the club finally relented three days before the dinner – on one condition. According to Catherine Gourley’s Society Sisters, the women had to “sit behind a curtain, unseen by the gentlemen in the audience, and unseen, as well, by the guest of honor, Mr. Dickens.”

The women refused to attend the event under such conditions. Already a routine organizer for women-driven events in her community, the rejection spurred Croly — whose own brother described her as a “volcanic force” — into action. 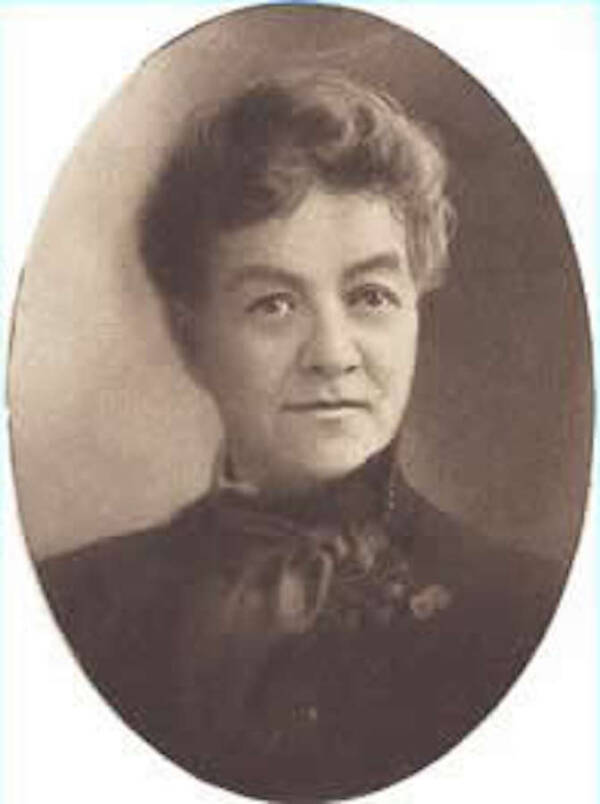 Wikimedia CommonsAfter Jane Cunningham Croly and other prominent women writers were barred from a dinner honoring Charles Dickens, they decided to create their own club.

“We will form a club of our own,” Croly announced. “We will give a banquet to ourselves, make all the speeches ourselves, and not invite a single man.”

Croly named her women’s club Sorosis which comes from the latin word soror meaning “sister.” It’s also a botanical term for a fruit that grows from the blooms of multiple flowers, like a pineapple.

If a woman wanted to become a member of Sorosis, she had to be invited by another member of the club. Then she would had to pass inspection, take a loyalty oath, and pay an initiation fee of five dollars.

The women agreed that they would gather for lunch at Delmonico’s, an upscale restaurant in Lower Manhattan and the same place that had held Dickens’s banquet.

The Legacy And Impact Of Sorosis 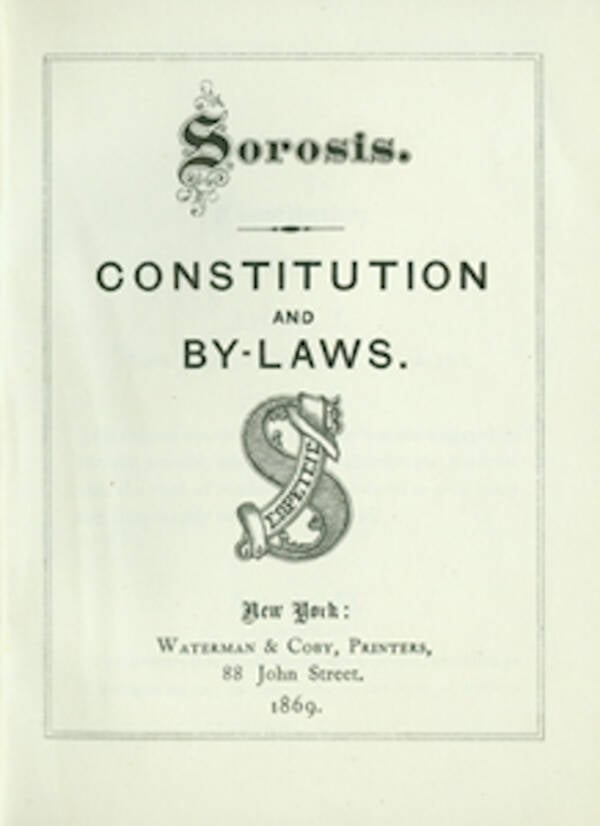 The first Sorosis meeting was held on April 20, 1868. From the get-go, it was clear that the women’s gathering would not merely consist of casual conversation over tea. Instead, Croly envisioned a female-powered network that was meant for the “collective elevation and advancement” of its members.

A large gathering of women with no husbands or men accompanying them might sound ordinary by modern standards, but it was a revolutionary act at the time. In the 19th century, it was virtually unheard of for women to dine out on their own, and those that did were criticized and believed to be sex workers scouting for customers.

So when the 12 members of the newly-formed Sorosis booked a table at the ever-popular Delmonico’s, they were being truly subversive. Within a year, Sorosis’s membership grew to 83 women, many of whom were accomplished writers, artists, historians, and scientists. They were mostly middle-aged, white, and middle or upper-middle class. Many had careers by necessity — not by choice.

Delmonico’s became Sorosis’s go-to meeting spot. The restaurant, fortunately, was run by the progressive Delmonico brothers who had no issue hosting the women’s club on a regular basis. 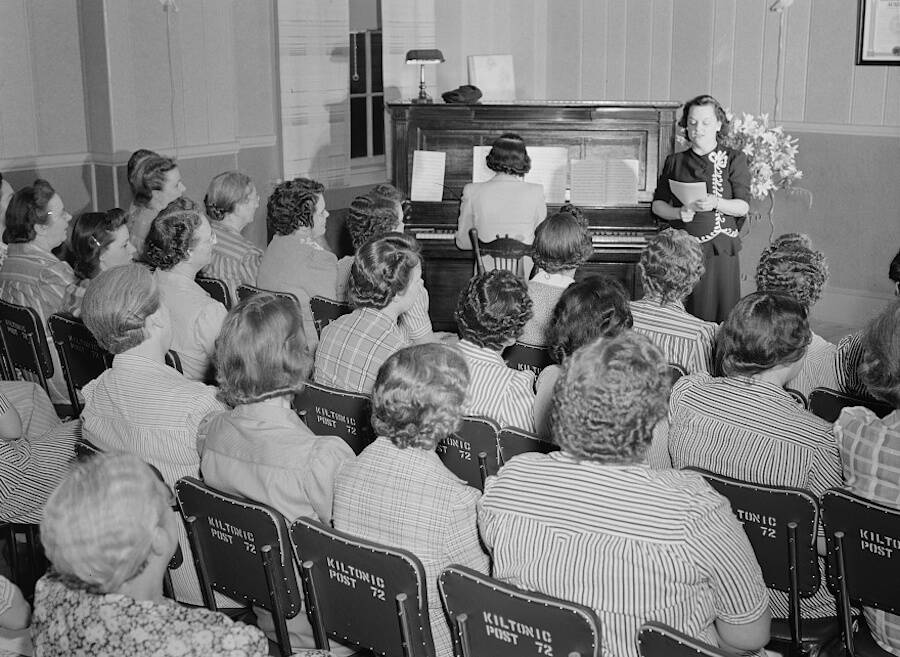 Library of CongressA lecture at an all-women’s club.

“It became their meeting place to exchange ideas around politics, history and the world. It was a place to be with other women,” said Delmonico’s Special Events Director Carin Sarafian in 2018, 150 years after the first Sorosis meeting (the restaurant is still open; their signature steak costs $51).

Sorosis was not only a place where women could feel welcomed, but it was also an incubator for them to learn, mingle, and thrive at a time when women were still regarded as inferior to men.

British women’s rights activist Emily Faithfull wrote about the all-women’s club in 1884 after one of her visits to the United States:

“In spite of a severe fire of hostile criticism and misrepresentation, [Sorosis] has evinced a sturdy vitality, and really demonstrated its right to exist by a large amount of beneficent work….These ladies pledged themselves to work for the release of women from the disabilities which debar them from a due participation in the rewards of industrial and professional labour….Some people still ask, ‘What has Sorosis done?’ I believe it has been the stepping-stone to useful public careers, and the source of inspiration to many ladies.” 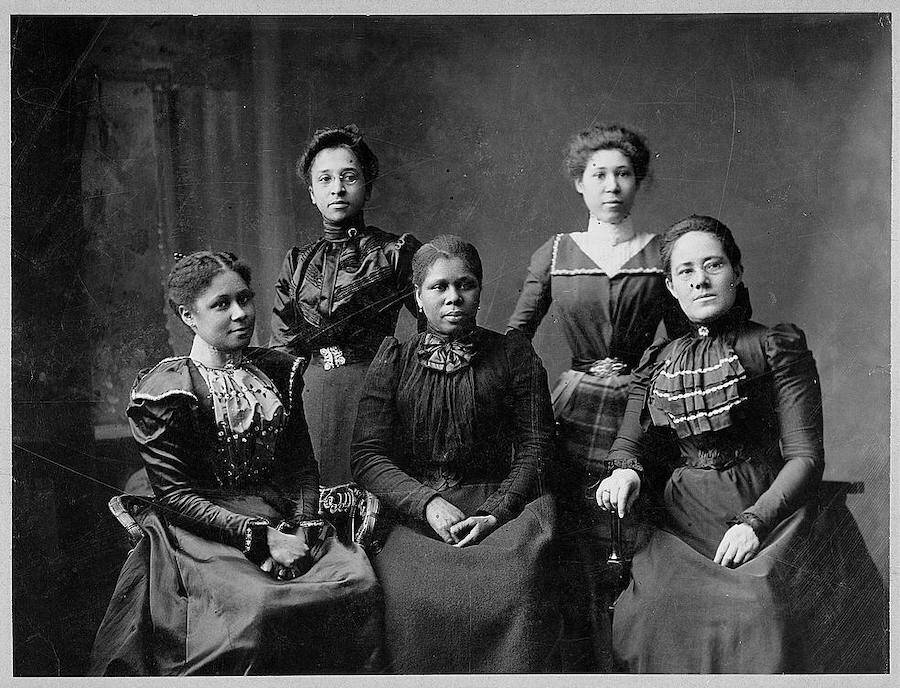 Library of CongressThe African-American officers of the Women’s League in Rhode Island, circa 1900.

Sorosis also welcomed housewives, mothers, and other non-professional women into its cohort, ultimately seeking to motivate them to become civic-minded members of their communities.

The influence of the club grew so much that several men applied to join Sorosis. Their applications were, of course, dismissed with the following statement:

“We willingly admit, of course, that the accident of your sex is on your part a misfortune and not a fault; nor do we wish to arrogate anything to ourselves, because we had the good fortune to be born women… Sorosis is too young for the society of gentlemen and must be allowed time to grow… But for years to come its reply to all male suitors must be, ‘Principles, not men.'”

A year after the Charles Dickens dinner debacle, members of Sorosis were invited to the New York Press Club at Delmonico’s. The first toast of the occasion, headed by Sorosis co-founder Fanny Fern and biographer James Parton was, “Woman’s kingdom: if it is not kingdom come, it is kingdom coming.”

It was a victory for local women writers and the progression of the women-only club movement. 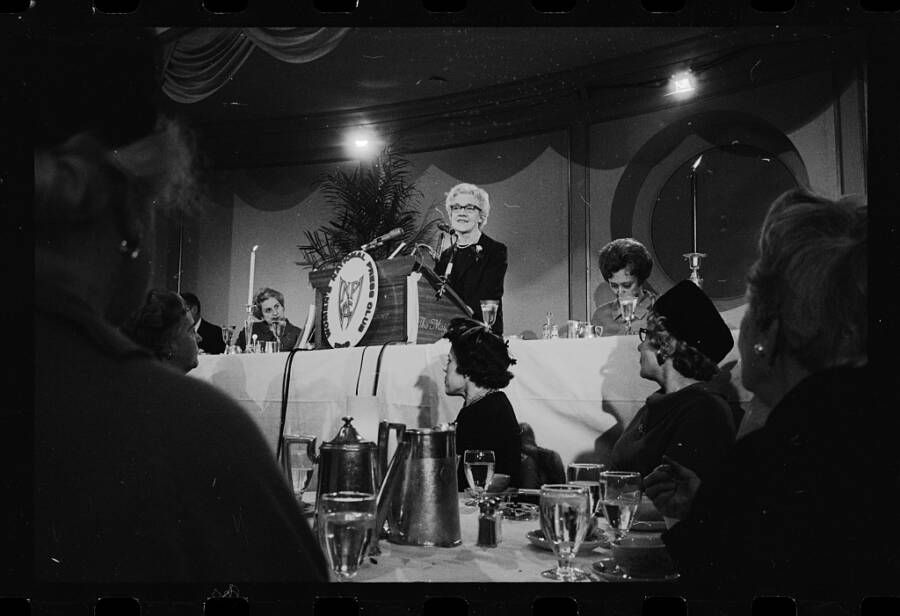 As times progressed, women’s clubs began forming across the country and became centers of empowerment and learning for women.

Jane Cunningham Croly herself noted in her 1898 book The History of the Woman’s Club Movement in America, “The woman has been the one isolated fact in the universe….The outlook upon the world, the means of education, the opportunities for advancement, had all been denied her.”

That is, until these for-women-only clubs began to crop up en mass across the nation.

In 1890, after Sorosis celebrated its 22nd anniversary, 63 separate women’s clubs from across the U.S. banded together to officially form the General Federation of Women’s Clubs (GFWC).

As such, women’s clubs were vital in pushing forward the women’s suffrage movement as well as other significant causes of the time, such as supporting military efforts during World War I and the abolition of slavery. The members threw their support behind these causes through civic engagement and fundraising in their communities. 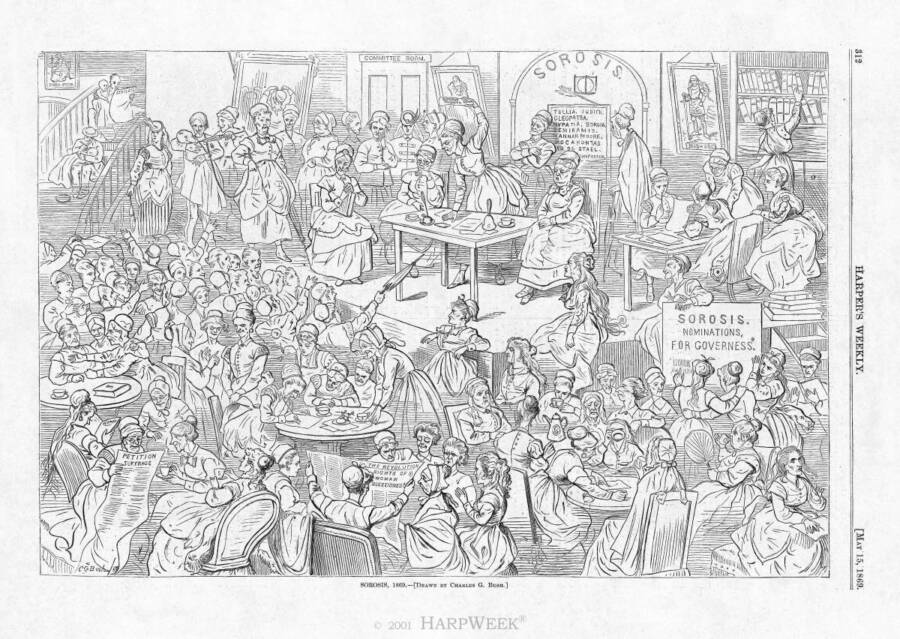 Today, the long history of exclusive women’s clubs continues with the creation of modern-day clubs like Zora’s House and The Wing.

A paid membership at one of these clubs typically offers women access to a community of like-minded women in addition to private members-only facilities. They can interact and connect with other members while attending workshops, events, and talks curated specifically to strengthen their network and help members grow.

Since the inception of Sorosis more than 150 years ago, women-only clubs have become more commonplace as hubs where professional like-minded women can come together and network.

The early creation of women’s clubs was mostly fueled by the need for women to organize for their rights and make themselves heard in a time when that wasn’t yet possible. The existence of these clubs helped narrow the gender gap between professional men and women (white women, that is), but women remained largely discriminated against.

In 1877, eight years after the Press Club’s toast to “woman’s kingdom,” for example, the Atlantic Monthly refused to invite the publication’s women contributors to its 20th anniversary event. And American women weren’t legally allowed to cast their vote nationwide until the 19th amendment was ratified in 1920. 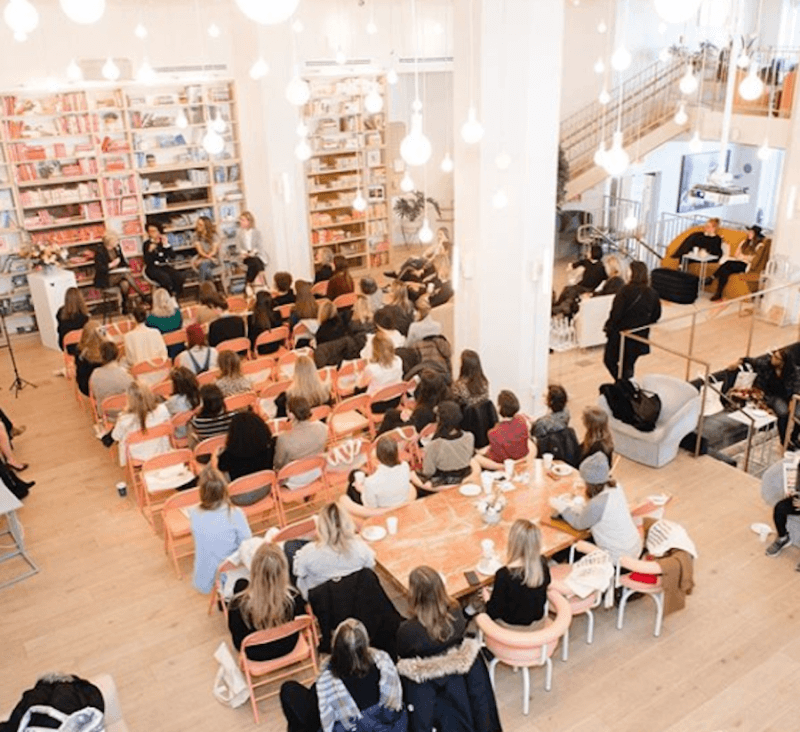 The Wing/InstagramMembers of a speaker event at The Wing, today’s fastest-growing women-only club.

Women’s clubs have long been plagued by a lack of inclusivity, both on a racial and socioeconomic level.

In fact, it wasn’t until after the 1960s that the U.S. saw an emergence of clubs — both men’s and women’s clubs – that were more racially integrated. Today, many of these women’s clubs still face the same inherent issues and serve predominantly white, middle- to upper-class members.

However, boosted by the contemporary women’s rights movement and an increasingly diverse cohort of working women, more and more women-only clubs have been filling the gaps.

Sorosis spurred a movement and helped galvanize and organize women in the fight for gender equality, but clearly there is still much work left to be done.