The Unsolved Mystery Of Carroll A. Deering, The ‘Ghost Ship’ Of North Carolina

In 1921, 11 sailors boarded the Carroll A. Deering in Barbados to head back to the United States. But weeks later, the ship was found wrecked — with no crew in sight. 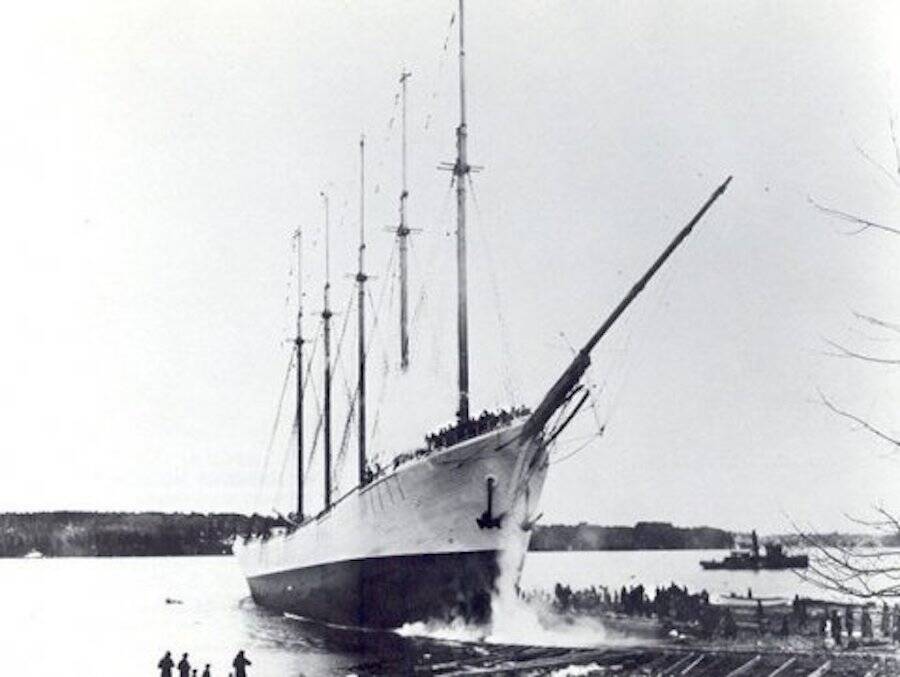 National Park ServiceThough the crew of the Carroll A. Deering was nowhere to be found, a six-toed cat was discovered aboard.

After sailing through the Bermuda Triangle in 1921, the Carroll A. Deering crashed just off the coast of North Carolina. Once an impressive cargo ship, the Carroll A. Deering was on its way back to the United States after a stop in Barbados. But instead of safely returning home, the vessel became one of the most mysterious shipwrecks in history.

The entire crew had vanished out of thin air. Their personal belongings, navigational equipment, and lifeboats were missing as well. To make matters even more unsettling, the Carroll A. Deering was not the first ship to have met its doom near North Carolina.

For centuries, the treacherous waters in the area have been feared by sailors. The shifting shorelines and unpredictable weather in the “Graveyard of the Atlantic” have wrecked thousands of ships throughout the years. But even in a dangerous stretch of the ocean like this, some wrecks stand out due to their sheer eeriness. The Carroll A. Deering is a prime example.

Everyone from the FBI to the Coast Guard to local fishermen tried to find out what happened to the missing sailors, offering up theories that ranged from mundane explanations of bad weather to sinister tales of mutiny or piracy. Some have even suggested the Bermuda Triangle itself was to blame.

But even though 100 years have passed, we still don’t know exactly what happened to the Carroll A. Deering.

The Hopeful Launch Of The Luxurious Carroll A. Deering 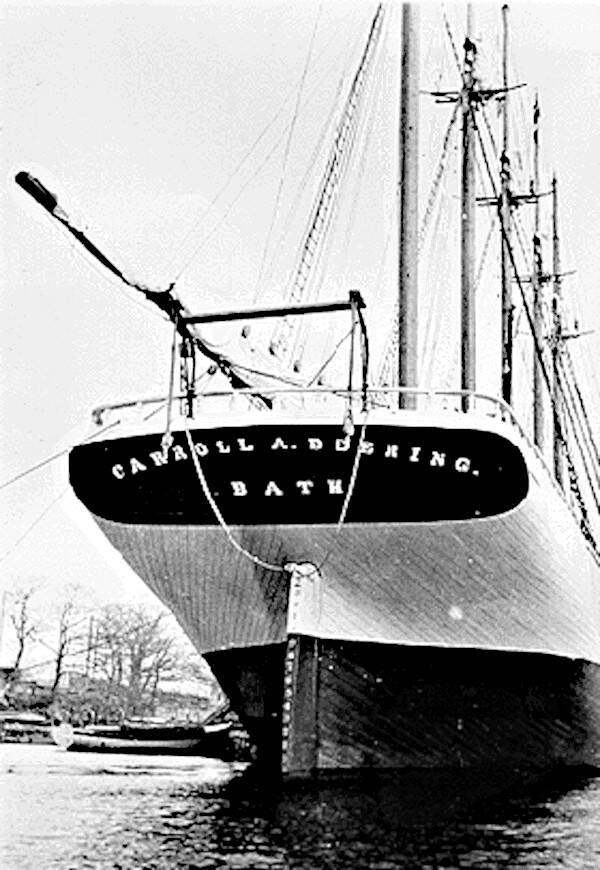 Built in 1919 by the G.G. Deering Company in Bath, Maine, the Carroll A. Deering was one of the last wooden schooners created before iron shipbuilding took over the industry.

A 1,879-ton, five-masted vessel, the Carroll A. Deering was named after the son of the owner of the company. Outfitted in oak and mahogany, it was considered to be luxurious for a cargo ship. Not only did it feature a usable lavatory, it also boasted steam heat and electricity.

Launched into the Kennebec River on its maiden voyage, the ship was captained by the Deerings’ friend William “Hungry Bill” Merritt, who helped transport a load of coal from Virginia to Rio de Janeiro, Brazil. And Merritt’s return trip to New York brought a cargo of corn from Argentina.

The Carroll A. Deering appeared to be a sound and reliable ship, as it made a couple more voyages like its first one over the following year.

The trip in August 1920 was supposed to be no different. Captain Merritt set off with a crew of 10 men — many of whom were Danish — to drop off yet another load of coal in Brazil. But Merritt fell ill early on in the trip and was forced to go ashore, leaving behind most of his crew and cargo. Merritt’s son, who was supposed to be his first mate, disembarked with his father.

Unsurprisingly, the G.G. Deering Company quickly became concerned about losing money and disrupting the trade. So they scrambled to find someone — anyone — to take the helm of the Carroll A. Deering.

Hatred And Brutality Among The New Crew 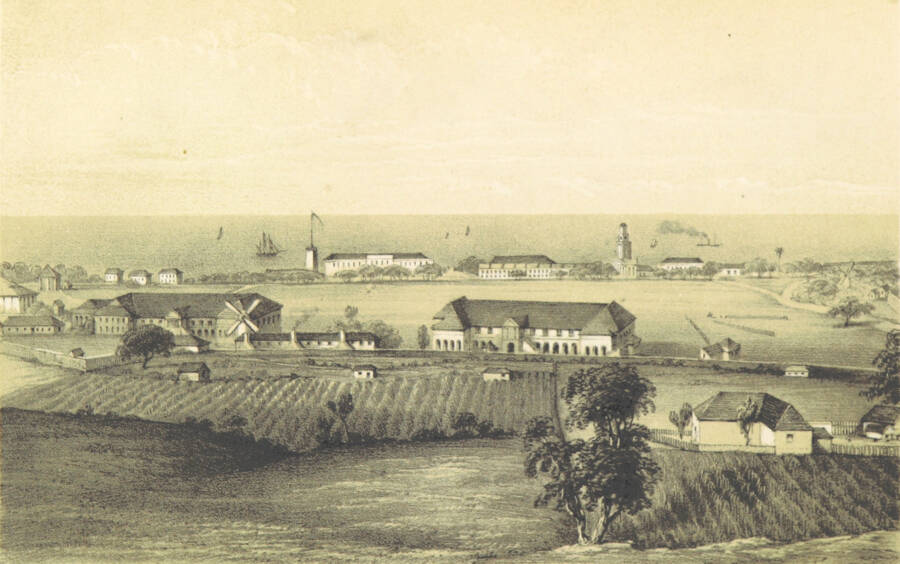 Wikimedia CommonsThe Carroll A. Deering made regular stops in Barbados for supplies, shore leave, and alcohol.

The unlikely answer to the company’s prayers came in the form of Willis B. Wormell, a 66-year-old retired sea captain with rounded shoulders and a tough demeanor. A sailor named Charles B. McLellan came on as the first mate. And the vessel promptly went out to sea once more.

But there was one big problem: Wormell and McLellan despised each other almost immediately, and being in close quarters on a ship clearly didn’t help. When the crew made a stop in Barbados in early January 1921, Wormell minced no words when describing his first mate to a friend.

Eerily, at some point during the Barbados stop, another captain directly asked Wormell if he thought his crew was capable of mutiny. Wormell said that he didn’t think all of them would turn against him, but both men knew that it wouldn’t necessarily take the whole crew to start a rebellion.

For his part, McLellan did nothing to ease the captain’s nerves. Just before they had arrived in Barbados, he had apparently bellowed at Wormell, “I’ll kill you before it’s over, old man!”

McLellan then proceeded to get drunk at the Continental Café, loudly complaining about Wormell the whole time. He was even overheard saying, “I’ll get the captain before we get to Norfolk, I will.” Between his threats and his drunkenness, McLellan behaved badly enough to earn a stay in jail.

Inexplicably, Wormell bailed him out, perhaps in the belief that his first mate was repentant. And then, around January 9, 1921, the crew continued on their way back to the United States.

The Final Sighting Of The Carroll A. Deering 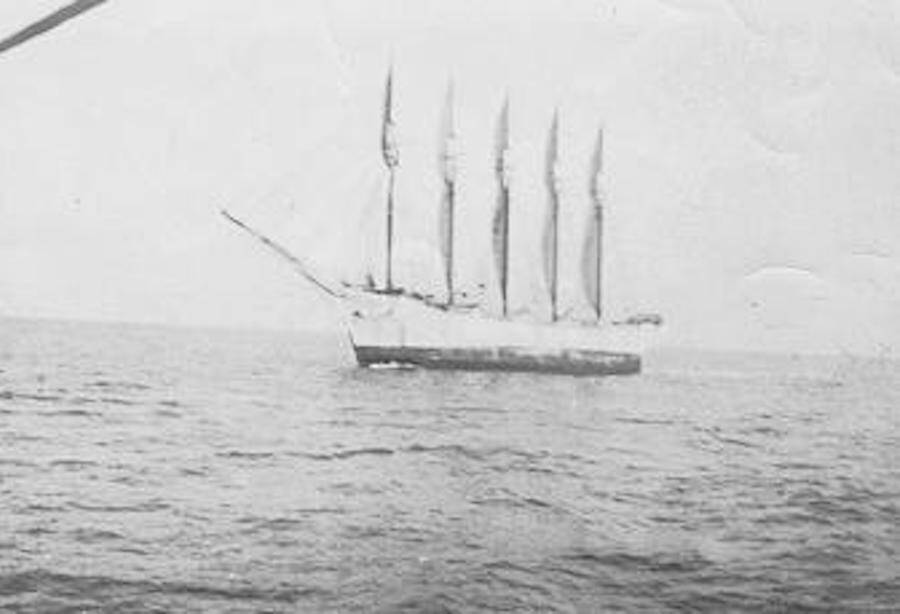 Wikimedia CommonsThe Carroll A. Deering, as seen from the Cape Lookout lightship.

The handwritten log entries on the ship’s map were filled out in Wormell’s handwriting until January 23, 1921. After that, an unknown hand replaced it. In the preceding weeks, the ship had apparently made its way up the coast toward North Carolina, eventually nearing the Cape Lookout Shoals.

The Scandinavian, whom Jacobson said didn’t “look or act or speak like either the master or an officer,” claimed that the Carroll A. Deering had lost its anchors and chains, and that the owners should be contacted. Jacobson also noted that the crew was milling around on the quarterdeck of the ship, an area that was usually reserved for the captain.

As the Carroll A. Deering sailed away to the north, Jacobson — whose radio wasn’t working — spotted a steamship approaching from the south. But when Jacobson sent signals to the second ship to pass on a message about the Carroll A. Deering, the new ship ignored him. And when Jacobson blew his powerful steam whistle in their direction, the ship turned directly eastward, as the crew quickly covered the ship’s nameplate in the process.

That was the last anyone saw of the mysterious steamer — and it was also the last time that the Carroll A. Deering was seen afloat. 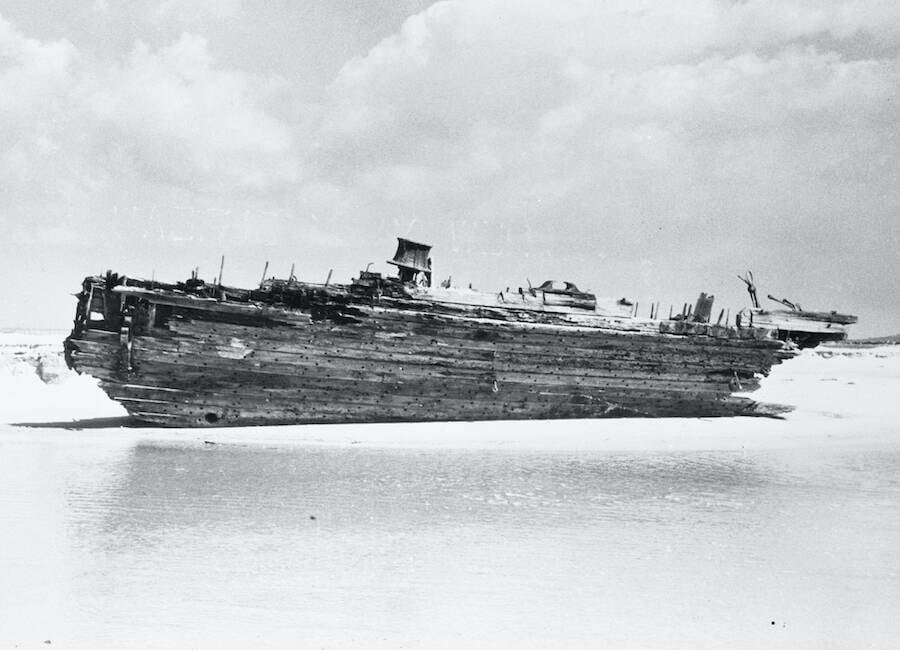 Bettmann/Contributor/Getty ImagesThe shipwreck of the Carroll A. Deering, after it crashed near the Outer Banks of North Carolina.

Early in the morning of January 31, 1921, a Coast Guard beach patrol spotted the Carroll A. Deering — “driven high up on the shoal… in a boiling bed of breakers… with all sails standing, as if she had been abandoned in a hurry” — off Cape Hatteras in the Outer Banks.

It would take a few days before the storms in the area died down enough for a search party to explore the shipwreck. And when rescuers finally got the chance to take a look, they made a few shocking discoveries.

The entire crew had vanished into thin air — and the ship’s lifeboats, navigational equipment, and chronometer were missing as well. Eerily, there was prepared food found in the galley, as if the sailors were about to eat a meal before they made a hasty departure. And the only living thing found aboard the ship was a six-toed cat.

The Coast Guard attempted to salvage the grounded ship several times, but foul weather and dangerous waters prevented them from doing so. By March 1921, the vessel had been deemed a hazard to other ships in the area, and so it was dynamited. Timbers from the wreckage washed ashore — and these materials were eventually used for building homes in the area.

Chilling Theories About What Happened To The Ship’s Crew 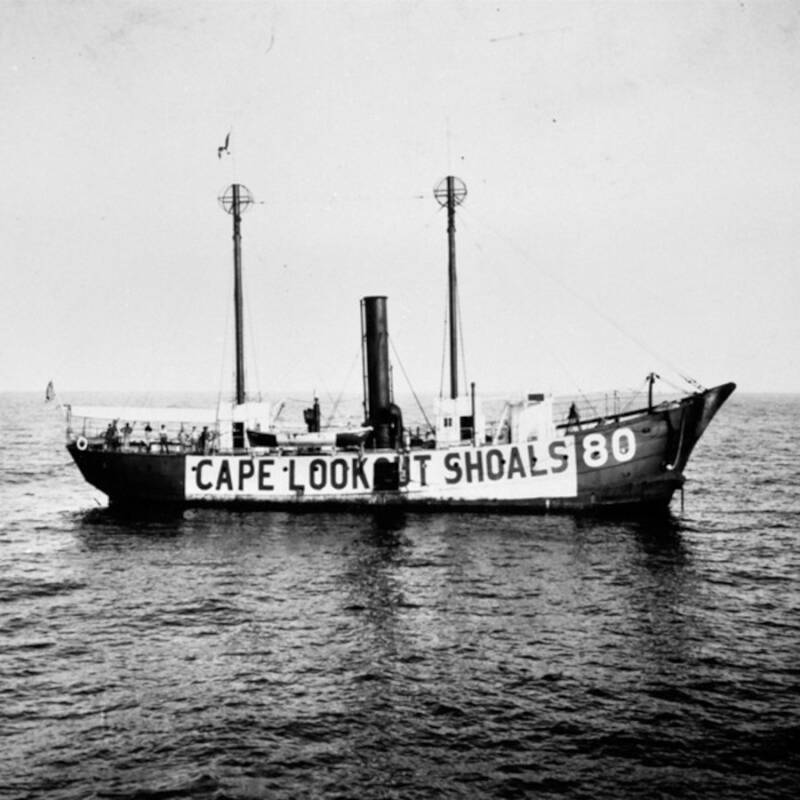 National Park ServiceA lightship keeper aboard the Cape Lookout Lightship saw the Carroll A. Deering just before its crew vanished.

It didn’t take long for the federal government to take interest in the mystery. The Coast Guard, the FBI, the Navy, and the Departments of the Treasury, Commerce, and Justice all investigated the matter. Herbert Hoover, who was then the Secretary of Commerce, led an especially intensive inquiry.

At the time, the United States was on the tail-end of the First Red Scare, and rumors were spreading that Communist mutineers were infiltrating crews on American ships. So some Hoover associates reportedly believed that Bolshevik pirates were ambushing merchantmen on the high seas before taking the vessels back to Russia with them.

This theory seized the public imagination, but there was just one problem: The ship was abandoned, meaning the alleged pirates had captured no vessel and had only kidnapped a handful of sailors. Besides, the items that were missing from the ship didn’t seem like typical pirate plunder. And there were few signs of a struggle — except for possibly in the captain’s quarters.

A similar theory — that rumrunners had attacked the ship — largely fell apart since smugglers would have likely sailed the ship away for later use rather than simply abandoning it. Plus, the ship would’ve probably been too slow and too visible to be used as a rumrunner.

Hurricanes were also ruled out as a likely culprit, since the Carroll A. Deering had been sailing away from the worst storms in the area. And when the Bermuda Triangle was offered as a possible explanation, that theory was largely regarded to be based in mythology rather than reality.

The investigations ended in 1922, with no official answer ever given. But the most widely accepted explanation is also the most violent and tragic.

Wormell’s forgiveness notwithstanding, it seems likely that the tension aboard — whether between the captain and McLellan or just among a disaffected crew — led to some kind of mutiny.

Then, due to bad weather or the lack of anchors, the ship ran aground. The crew may have attempted to escape by lifeboat, only to be swamped by the violent waves in the area or carried out to deep water. As for the unknown steamship spotted near the Carroll A. Deering, that may have been a genuine rumrunner, eager to conceal itself from prying eyes.

Whatever the explanation, the full story of the Carroll A. Deering — and its missing crew — is lost forever in the Graveyard of the Atlantic.

After learning about the Carroll A. Deering, find out more about the equally mysterious Mary Celeste, which was found drifting at sea with its passengers missing. Then, read about more of the creepiest ghost ships in history.