After a miserable childhood, Catherine of Valois married King Henry V of England and secured her place in history — but she lived in controversy after his untimely death. 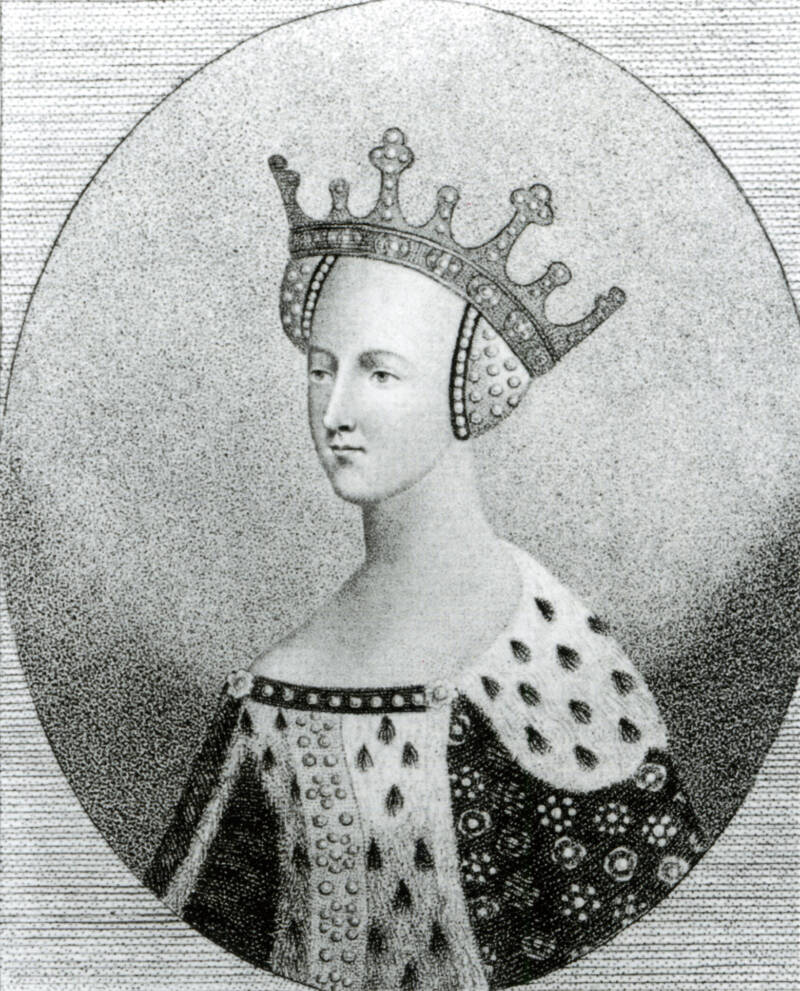 National Portrait Gallery/Wikimedia Commons A portrait miniature of a medieval woman, most likely Catherine of Valois, Queen of England and wife of Henry V.

Around the year 1599, Shakespeare penned Henry V, a fictionalized dramatization of the medieval King Henry V and his 1415 victory against the French at the Battle of Agincourt. Following the Shakespearean tradition, the new Netflix film The King ends on a happy note with his betrothal to the French Princess Catherine of Valois, played by Lily-Rose Depp.

But what do we know of the real Catherine of Valois?

Catherine of Valois was born in Paris on Oct. 27, 1401 and grew up as the lonely and neglected youngest daughter of King Charles VI of France and Isabeau of Bavaria. 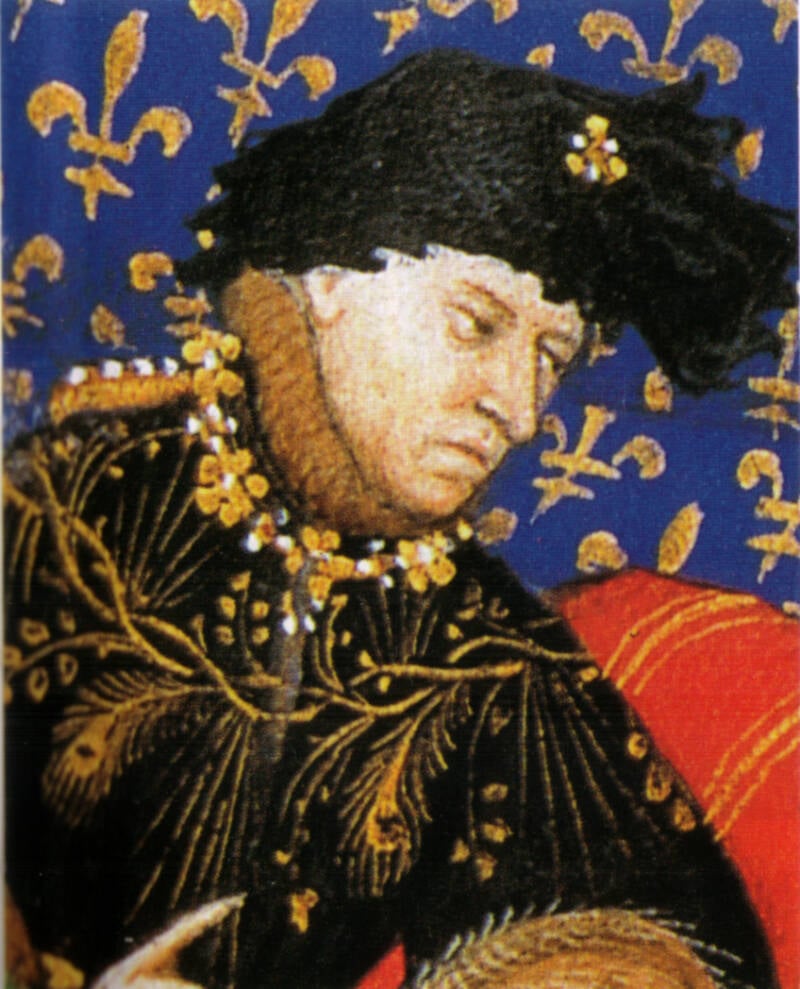 Her father, known as “Charles the Mad,” experienced tragic bouts of mental illness, during which he killed four of his own knights and thought he was made of glass.

Catherine’s mother, meanwhile, has been credited with selfishness, sexual promiscuity, and political ineptitude during her time as regent in her husband’s emotional and mental absence — though many of these qualities were ascribed to her after her death, probably for political reasons.

Catherine’s older sister, Isabella, was briefly Queen of England through her marriage to King Richard II, but she returned home once Henry IV seized the English throne. It’s at this point that to betroth Henry’s son and heir to Catherine began.

While Catherine only makes her entrance at the end of The King, she is present in the background during Shakespeare’s play, depicted as a demure young princess being groomed for marriage.

Netflix’s The King depicts the Shakespearean version of the lives of Henry V and Catherine of Valois, focusing on the Battle of Agincourt.

In reality, we do not know much about this period of her life. Despite the important role she played in shaping English history, the historical sources on Catherine’s early life are very scarce.

Marriage Negotiations And The Battle Of Agincourt

Charles VI’s illness forced him to withdraw from public life when Catherine of Valois was only three years old. Isabeau tried to wrest control of the government from her cousin-in-law, but a power vacuum ignited the Armagnac–Burgundian Civil War in 1407 and made room for England’s conquest.

It is possible that Catherine and her sisters, Marie and Michelle, and her brother the Dauphine Louis (played by an eccentric, thickly French-accented Robert Pattinson in The King) were snatched away from court for a period during the civil war.

In 1413, Henry IV died before the marriage negotiations for his son had been completed. The now 26-year-old Henry V was crowned king; Catherine was only 11.

In Kenneth Branagh’s loyal adaptation of Shakespeare’s Henry V, a charming Henry woos Catherine of Valois, played by Emma Thompson. While Thompson and Branagh were both about 30 years old at the time of filming, the real-life Catherine of was only 18 when she married Henry, a man nearly twice her age.

Henry V proceeded to send Charles VI (who was still technically king of France) an ambitious list of demands — including the return of Aquitaine and Normandy, and Catherine’s daughter’s hand in marriage, accompanied by an enormous dowry. In 1415, he set sail for France.

Henry V’s skillful victory at the Battle of Agincourt became the stuff of legend, and according to Shakespearean tradition, brought France to its knees. The King ends on a victorious note, with Charles VI of France surrendering and offering his daughter Catherine to Henry V as a spoil of war.

Catherine The Consort: From French Princess To Queen Of England

In reality, it took five more years of military campaigns for Henry to defeat the French, conquer Normandy, disinherit the Dauphin and be named as the heir to the French throne – and marry Catherine of Valois.

On June 2, 1420, the 33-year-old King of England and the 18-year-old princess finally married in the French village of Troyes. 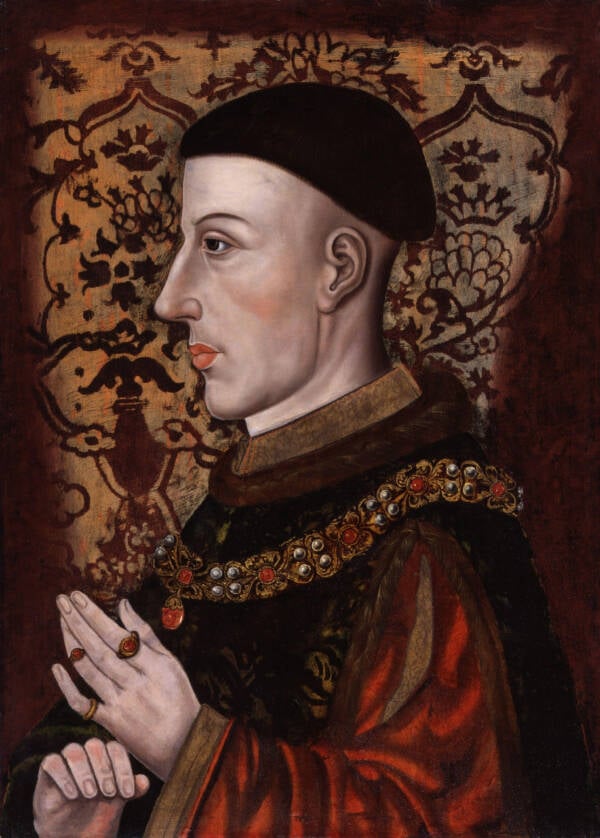 Wikimedia Commons/National Portrait GalleryThis portrait of King Henry V of England was made in the late 16th or early 17th century.

We know very little about the nature of their relationship, but as this was an arranged marriage of dynastic alliance, and brought about by the military defeat of her father and disinheritance of her brother, it is unlikely that Catherine was immediately smitten with her new husband.

At this point, Catherine left her home of France and travelled to England. Her coronation ceremony at Westminster Abbey took place on February 23, 1421.

But her time with her husband at their new home was short-lived. After Henry’s younger brother Thomas was killed in battle in France, Henry V was determined to avenge his death. He returned to France in June 1421, leaving Catherine pregnant with their first child.

Catherine gave birth to a baby boy named Henry on Dec. 6, 1421. She decided to return home to France to join her husband, and left her infant son in the care of his uncle, Humphrey, Duke of Gloucester. She arrived in France in May 1422.

Tragically, Henry V would never meet his son because he contracted dysentery during the months-long Siege of Meaux and died at the age of 36, on Aug. 31, 1422. 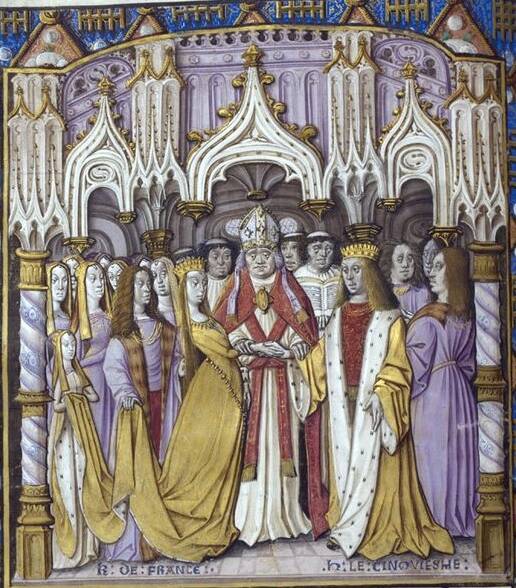 Wikimedia CommonsA painting dated before 1494 showing the marriage ceremony of Henry V of England and Catherine of Valois.

Catherine was now a widow and her son, less than nine months old, was proclaimed King Henry VI of England. A few months later, Catherine’s father King Charles VI died, which, according to the Treaty of Troyes, made her young son also the King of France.

Humphrey, the new king’s uncle and Catherine’s brother-in-law, was concerned that if she remarried, her new husband would have too much control over matters of state as the stepfather of the king. He therefore passed a preventative new law that forbade the Dowager Queen from remarrying without the consent of the king and his council.

An Unexpected Legacy: The Grandmother Of The Tudor Dynasty

As Dowager Queen and mother to the king, Catherine was said to have participated in state processions, with the infant king seated on her lap, but she played no formal role in government. She was not named regent; Humphrey ruled in her son’s stead as Lord Protector. 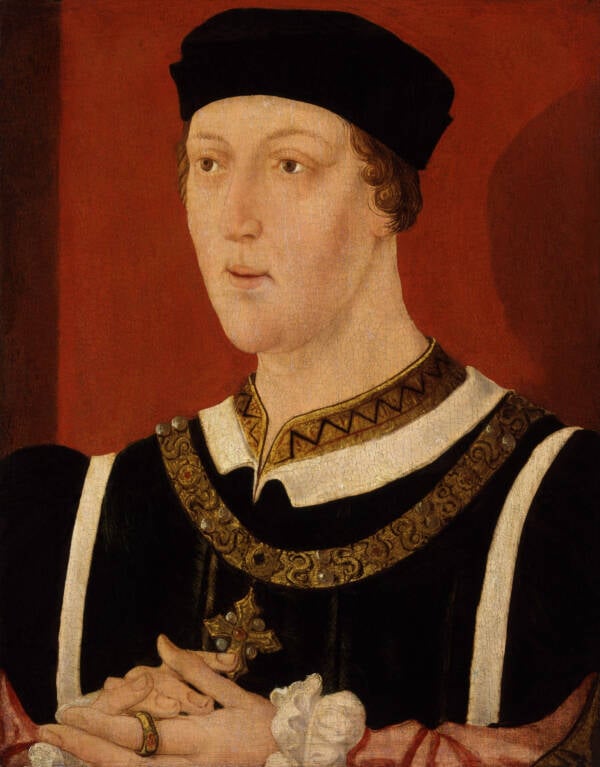 Rumors began to circulate that he was her lover.

During the course of their relationship, they had three sons (Edmund, Jasper, and Owen) and two daughters (Tacinda and Margaret). It is highly unlikely that a French princess and Dowager Queen of England would risk the scandal of illegitimate children, and it has long been supposed that Catherine and Owen secretly married in 1429, though no documentation of this clandestine ceremony exists.

Regardless, Catherine was determined to find her own happiness in life, and bravely built a new life with her partner of choice.

But by 1436, rumors of Catherine’s marriage and new, secret family reached court, and Humphrey, Duke of Gloucester, had Owen imprisoned.

Catherine retired to Bermondsey Abbey and grew ill from heartbreak at being separated from her husband and children. She died shortly after childbirth in a state of political disgrace on Jan. 3, 1437 and was buried at Westminster Abbey.

Ironically, it was not her first marriage to King Henry V and the son she bore him, the future Henry VI, who shaped her legacy. 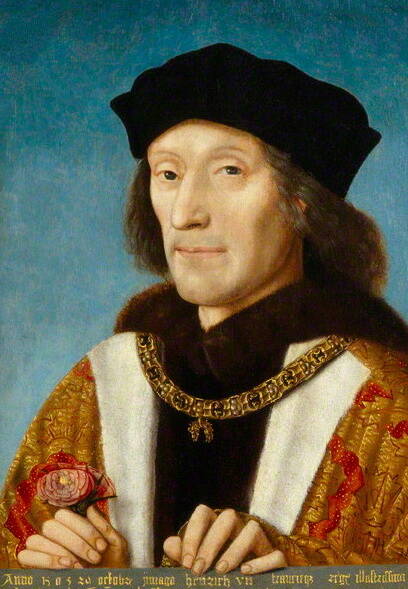 Henry VI’s reign was riddled with bouts of mental illness, likely inherited from Catherine’s father, and the English kingdom was ripped apart by the civil war known as the War of the Roses. By the time Henry VI died in 1471, he had lost most of the land that his father had conquered on the continent.

Instead, it was her second secret marriage to the seemingly irrelevant Welsh squire that would change England’s future. Eventually, Catherine and Owen’s son Edmund Tudor was elevated to Earl of Richmond, and in 1457 his young wife Margaret Beaufort gave birth to a baby they named Henry.

Eventually, this Henry Tudor founded the Tudor dynasty as King Henry VII, after winning the Battle of Bosworth in 1485.

To distance himself from his questionable birth, Henry VII had his grandmother’s memorial removed. It was not until 1878 that Queen Victoria had Catherine’s remains properly re-interred, and her wooden effigy still survives to this day at Westminster Abbey. The inscription reads:

Under this slab (once the altar of this chapel) for long cast down and broken up by fire, rest at last, after various vicissitudes, finally deposited here by command of Queen Victoria, the bones of Catherine de Valois, daughter of Charles VI, King of France, wife of Henry V, mother of Henry VI, grandmother of Henry VII, born 1400, crowned 1421, died 1438. 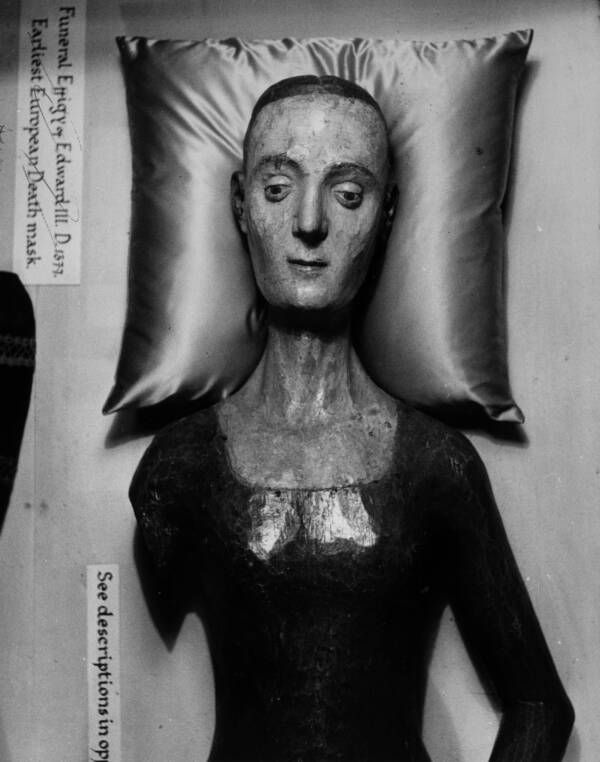 David E. Steen/Getty ImagesCatherine of Valois’ painted wooden effigy is one of the earliest European death masks and still survives in Westminster Abbey.

After learning about Catherine of Valois and the true story behind The King, delve into the wild biography of The Favourite‘s Queen Anne. Then learn what happened to all six wives of Catherine’s great-grandson, Henry VIII.