The new bridge is part of a $2 billion investment that's helping Vietnam to become one of the fastest-growing tourist destinations on Earth. 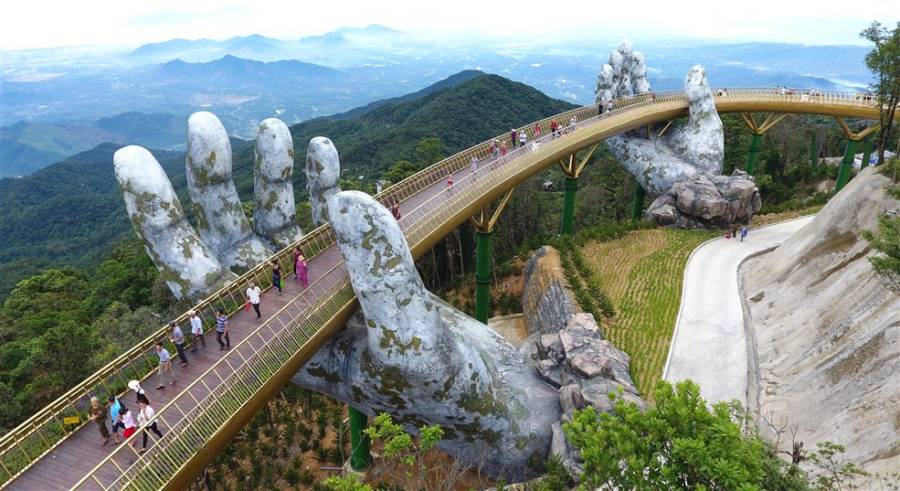 A new bridge that’s opened outside of Da Nang, Vietnam — aptly named the “Golden Bridge” — has quickly staked its claim to being one of the most stunning bridges on Earth.

The Golden Bridge, which sits about 4,600 feet above sea level in the Bà Nà hills, is designed to look like it’s being held up by two massive stone hands.

The golden walkway supported by the hands extends on a curve that stretches nearly 500 feet long and is lined with purple lobelia chrysanthemums while offering stunning views of the Vietnamese countryside below.

Even though the hands look like they’ve been carved out of stone, remarkably they’re not. “We designed the skeleton of the hands and covered them with steel meshes,” explained a representative of TA Landscape Architecture, the firm that designed the bridge, to Bored Panda. “Then we finished with fiberglass and added the theming on it. The entire construction of the bridge took about a year.”

The Golden Bridge is a part of a $2 billion dollar investment that aims to attract more visitors to Vietnam. And such efforts may already be paying off. In the first two months of 2018, Vietnam saw 2.86 million foreign visitors come to explore the country. This is a 29.7 percent increase over the same period of time in 2017, according to the General Statistics Office of Vietnam.

This pedestrian bridge in Vietnam was opened to the public in June.
Known as the Golden Bridge, it stands 1,400m above sea level above the Ba Na hills and is a work of art. pic.twitter.com/jveuu5kySB

A 2017 report published by the United Nations World Tourism Organization ranked Vietnam’s tourism growth seventh globally, and Vietnam was the only country in Southeast Asia to reach the top ten on that list.

Vietnam aims to attract 15-17 million foreign tourists by the end of the year, and it looks like the country is well on its way to reaching that goal. 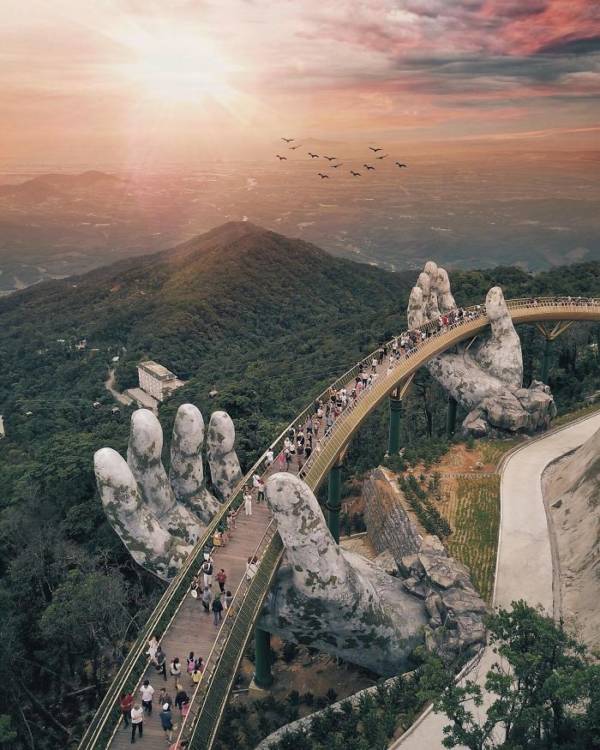 In 2016, 32.6 million international tourists visited Thailand, 26.8 million traveled to Malaysia, and 12.0 million went to Indonesia. Vietnam wasn’t too far behind in their international tourism number in 2016, clocking in at 10 million foreign visitors. But those figures have been on the rise since, and in the first six months of 2018 alone there have already been a total of 7.8 million foreign visitors to Vietnam.

And if Vietnam plans to build more stunning attractions like the Golden Bridge, the country can surely expect these tourism numbers to only increase further.

Next, check out the footage of the crazy twists and turns of the Tacoma Narrows Bridge collapse. Then, see why the Peak Walk suspension bridge is so thrilling — and terrifying.