The grave itself was unearthed a year ago, but the discovery of the shield is so rare that it's been deemed one of the most significant finds of its kind in 1,000 years. 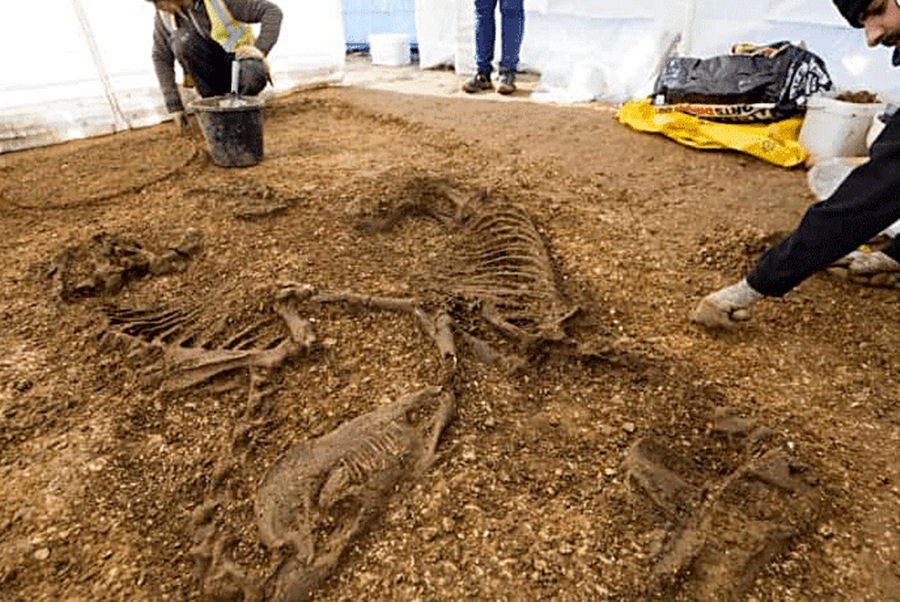 Archeology & ArtsRemains of ancient horses beside an Iron Age chariot.

Ancient Celtic burials were regarded with great solemnity. A successful transition into the afterlife was of the utmost importance. These beliefs are especially evident in the recent discovery of an elaborate 2,200-year-old Celtic warrior grave which included an entire chariot with the rider, skeletal remains of the horses, and an extremely rare gilded shield.

According to the Yorkshire Post, there have been roughly 20 “chariot graves” like this found in the last century across England, and mostly in Yorkshire. This particular grave was first unearthed about a year ago, but it has continued to yield ancient treasures.

Archaeologists believe that the grave dates back to more than 2,000 years during the Iron Age. The corpse found inside the grave is believed to have been in his late 40s at the time of his death which was likely sometime between 320 BC and 174 BC.

“We don’t know how the man died,” archaeologist Paula Ware from MAP Archaeological Practice said. “There are some blunt force traumas but they wouldn’t have killed him. I don’t think he died in battle; it is highly likely he died in old age.”

Whoever the man was, Ware added, he “has collected some nice goodies along the way – he is definitely not run of the mill.” The “goodies” Ware alluded to include six piglets — thought to be ceremonial offerings — and a decorative bronze and red glass “dragonfly” brooch. 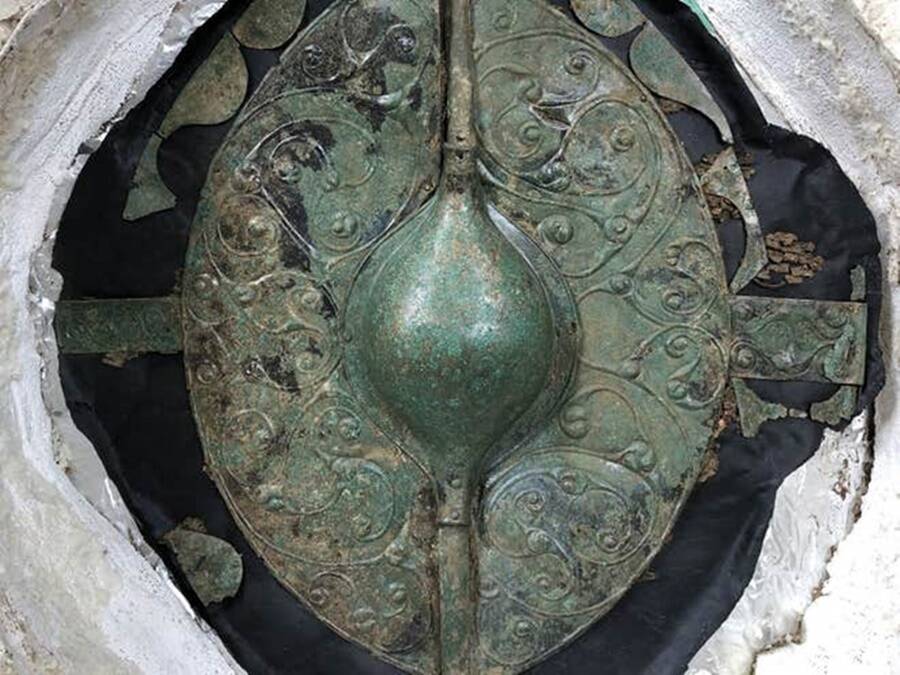 SWNSThe 2,000-year-old shield inside the grave has been hailed as the most important discovery of the millennium in Britain.

Most noteworthy of the items was a shield decorated in the La Tène style which featured an asymmetrical design and spiral motifs made by hammering a bronze sheet from underneath.

The shield showed visible slash marks on the upper right-hand side indicating that it had been used in battle before being put underground, contradicting the popular belief that such elaborately-designed metal shields were purely ceremonial and not intended for warfare.

The shield also featured sturdy leather and wood fittings on the back which had rotted away and a scalloped border incomparable to any other Iron Age find across Europe. The shield is thus quite a significant find on its own.

The find is so exquisite, in fact, that experts have hailed it “the most important British Celtic art object of the millennium.”

One other shield which comes close to this stunning discovery is the famous Wandsworth shield that was found in the Thames river in 1849. It is now safely kept in the British Museum.

The Celtic shield is certainly a remarkable find but so, too, are the chariot and horses buried beside it. The horses were found with their hooves on the ground and their rear legs looking as though they could leap out of the grave. Scientists are still unable to confirm whether the horses were buried dead or alive.

“For me [the positioning of the hooves] definitely indicates that they were moving onto something else – he has his food, weapons and the means of travel,” Ware said. 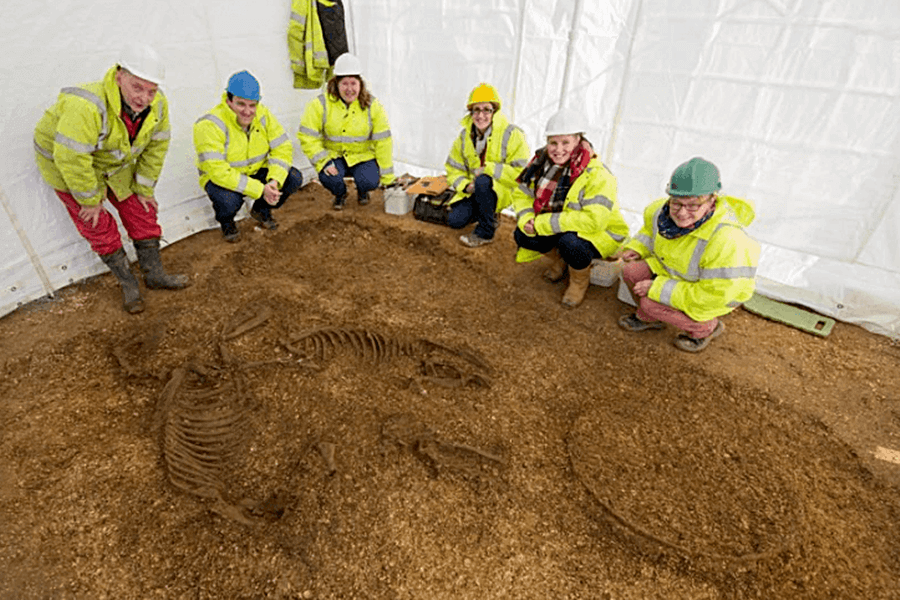 TwitterThe recent discovery was one of the most significant finds related to British Celtic history.

The dig site itself, which is located at a building site in the market town, first made headlines in 2018.

Among the hundreds of chariot graves that have been uncovered so far, a large number of them have been attributed to the Arras Culture which lived in this region of modern England during the Middle Iron Age. Some other similar graves were believed to come from the Anglian period which was 600 to 800 years later.

This most recent discovery, however, dates back to the Iron Age, which began around 1200-600 B.C. following the collapse of the Bronze Age. This era marked the introduction of iron and steel as prominent materials for making weapons and tools among warriors in Europe, Asia, and parts of Africa.

“The excavation at The Mile development is a truly magnificent discovery for British history and we feel this recognition and find should remain in the local area,” said Scott Waters, the director at Persimmon Homes Yorkshire where excavations have been completed.

The remarkable Iron Age artifacts will most likely be kept at the new museum nearby Burnby Hall.

Next, read about the Iron Age Celtic woman found buried inside a hollowed-out tree trunk in Zurich and then learn the legend of Scathach: the warrior woman of Irish mythology.