Champagne Pool Is One Of New Zealand’s ‘Zombie Volcanoes’

New Zealand's Champagne Pool, a hot spring in a region notorious for volcanic activity, is hiding a scary secret just below it's surface. 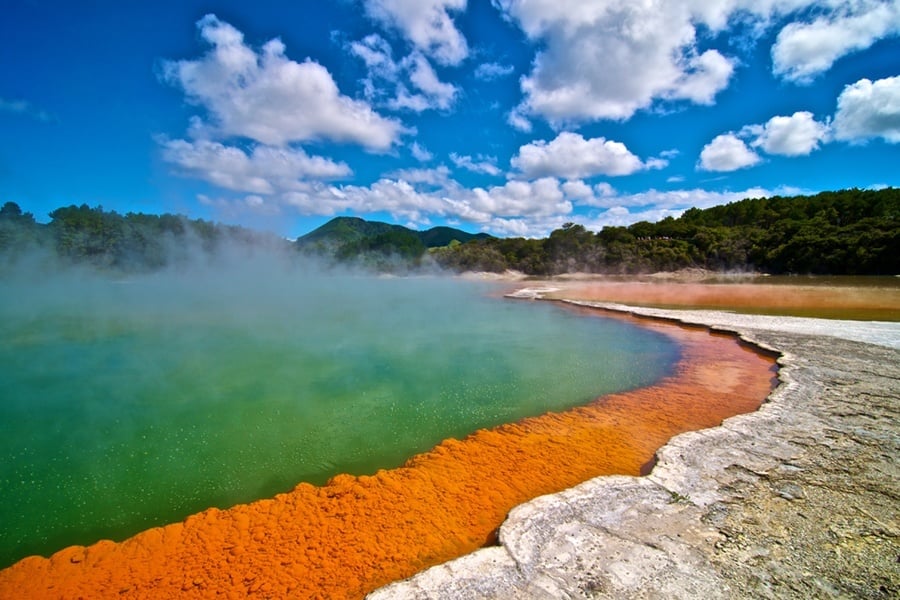 A recent swarm of mysterious Earthquakes in New Zealand’s Bay of Plenty had scientists puzzled until the culprit was revealed last week: a growing bubble of magma below Champagne Pool in Rotorua, one of the most active volcanic regions in the tiny country.

Geophysicists looked into how the ground moved during these earthquakes in the Taupo Volcanic Zone, down the center of New Zealand’s North Island.

They noticed that the earth moved as though a reservoir of magma was simmering below the surface.

“There’s no need to panic, but chances are there are lots of bodies of magma dotted throughout the crust,” says Ian Hamling, a geophysicist at GNS Science who led the study.

Some of that magma is bubbling right below Champagne Pool, a turquoise and rusty red hot spring located in the Waiotapu area of the Taupo Volcanic Zone.

Waiotapu is home to several other colorful geothermal phenomenons like Water Pond, which is bright yellow due to heavy deposits of sulfur.

One scientist calls the places where magma has pushed the Earth’s crust somewhere other than other active volcano “zombie volcanoes” because the magma creates signs of activity where they shouldn’t be any.

Actually, the magma chambers are just now being discovered simply because the satellites geophysicists use to track the movement of the ground have improved.

But magma doesn’t necessarily mean any big disasters are on the horizon (even though the Taupo Volcanic Region has experienced 25 massive eruptions in the past 1.6 million years).

“There is no evidence of volcanic unrest,” Hamling insists.