This was the deadliest mid-air collision ever — and it left no survivors. 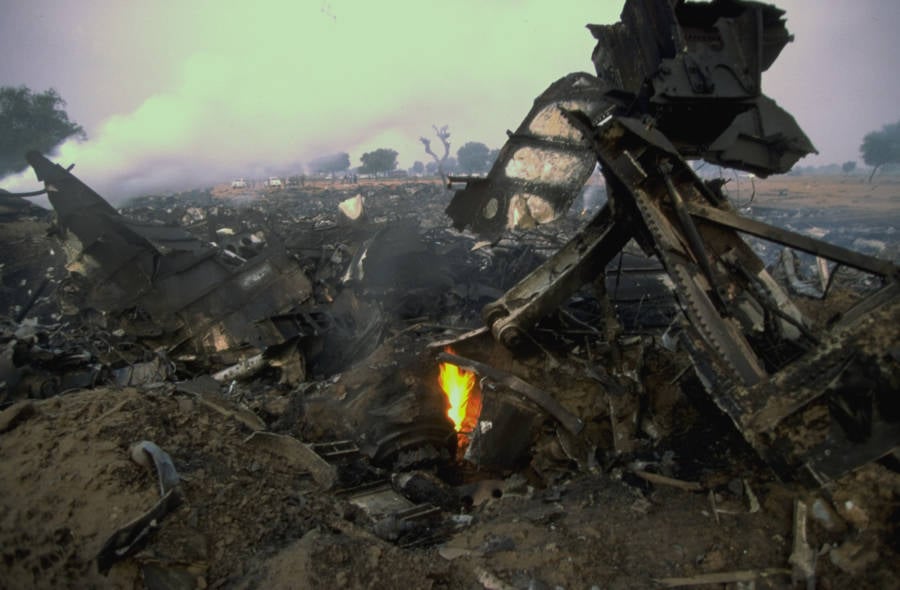 The worst mid-air collision in the history of aviation occurred because of language barriers and outdated radar equipment. The disaster saw the deaths of 351 people. The body count, while high, was only the third-deadliest aviation disaster since the introduction of passenger airplanes.

Immediately Before The Crash

Commander Gennady Cherapanov informed air traffic control in New Delhi that he was descending from 23,000 to 18,000 feet on approach to India Gandhi International Airport on the evening of Nov. 12, 1996. Air traffic controller V.K. Dutta, an experienced flight controller who was recently promoted, gave Cherapanov permission to descend to 15,000 feet on approach. The plane’s pilot confirmed that Kazak Airlines Flight 1907, an Ilyushin 76 model airplane, would go to 15,000 feet.

Meanwhile, Captain A.L. Shbaly of Saudi Arabian Airlines Flight 763, a Boeing 747, told air traffic control he was at 10,000 feet. Dutta gave him permission to ascend to 14,000 feet. Flight 763 left New Delhi three times per week, and the crew of the Boeing 747 knew the routine and was right on time.

The Kazakh plane was coming into the airport, while the Saudi plane was departing it.

Air traffic control told the Kazakh pilot that there was another plane 14 miles away. Controllers on the ground assumed both planes would cross paths separated by 1,000 feet.

Both planes were traveling at more than 300 mph at a force 700 times stronger than that of a car crash when they met head-on.

From Dutta’s outdated radar, he saw two points that signified each aircraft become one and disappear. To anyone else on the ground, they saw a tremendous fireball in the dusk sky over the Charkhi Dadri region outside of New Delhi.

People in surrounding villages saw huge chunks of airplanes land in their fields at around 6:40 P.M. local time.

Debris rained down over an area six miles wide. Surprisingly, as many as three or four people may have survived the initial impact but then died shortly after the planes hit the ground.

One witness said, “I saw this fireball, like a giant burst of gas on fire,” followed by a sound that was greater than any clap of thunder anyone ever heard.

A U.S. Air Force pilot, flying a C-141 cargo plane, saw the immediate aftermath of the collision. “We noticed out of our right hand a large cloud lit up with an orange glow from within the clouds.” Then, he reported two distinct fireballs emerged from the cloud that hit the ground less than a minute later. 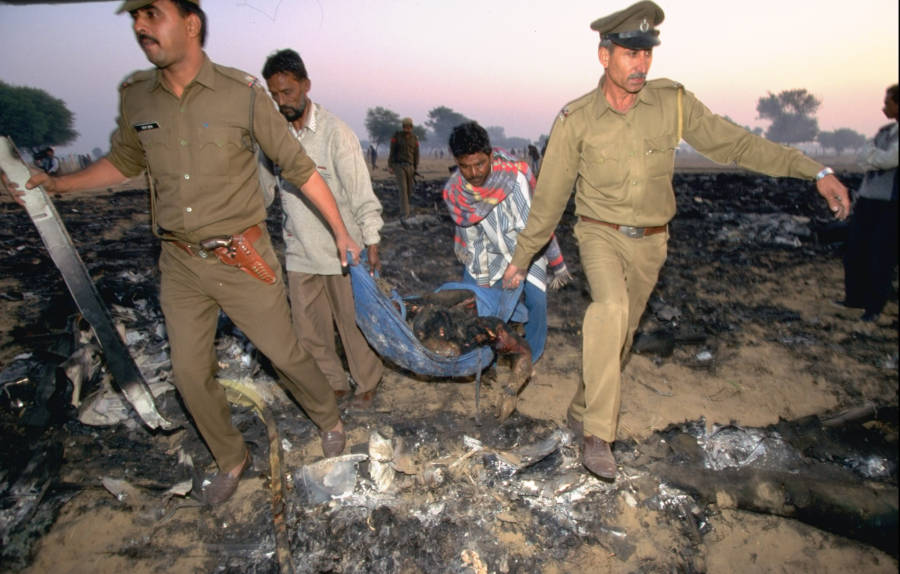 Immediately following the crash, emergency crews and the news media reached the chaos. There was a smell of burnt flesh and dead bodies everywhere. Flaming debris was still hot, and the wreck was hard to navigate.

Most of the victims were Indian nationalists. There were 312 people on board the Saudi 747 and 39 in the much smaller Kazakh plane. Investigators considered several factors in how the crash happened, but Indian officials pin most of the blame on the Kazakh plane’s crew.

Investigators theorized that pilots from Kazakhstan in 1996 also flew planes with the Soviet Union. Soviets used the metric system, but air traffic control in New Delhi gave instructions in English units. Instead of meters above the ground, air traffic told both planes to ascend or descend to a certain level in feet. The Kazakh crew also didn’t understand English very well.

Technology, or lack thereof, also played a part in the crash.

n June 1, 1996, all planes flying over Indian airspace were supposed to have upgraded transponders that would alert pilots to nearby airplanes. The Saudi plane had such a transponder, but technology on the ground in New Delhi wasn’t ready for the technological upgrade . The radar needed to communicate with the transponder wasn’t installed yet, so the proximity alert system wasn’t working.

The ultimate blame lay with the Kazakh pilot who descended his plane to below 15,000 feet without permission from the control tower. Because of a lack of technological upgrades, there was no way to know if the planes were at their correct altitudes as prescribed by air traffic control.

The Historical Legacy Of The Charkhi Dadri Mid-Air Collision

The mid-air collision over Charkhi Dadri ranks as the third-worst air disaster in history at 351 deaths. Number two occurred on Aug. 12, 1985, when 520 people died following explosive decompression onboard Japan Airlines Flight 123. The 747 crashed into a mountain 32 minutes after the cabin lost its air pressure.

The deadliest crash happened on March 27, 1977. That was when 538 people lost their lives on the island of Tenerife in the Canary Islands off the coast of Spain. A 747 from KLM Airlines was starting its takeoff at the airport when it collided with a Pan Am jumbo jet still on the ground.

Thanks to modern technology, better radar systems, and advanced computer software, these types of deadly collisions are hopefully a footnote to history even though the friendly skies are a lot more crowded now than they were 20 years ago.

After reading about the Charkhi Dadri mid-air collision, read about this horrific plane crash in the Andes. Then, read about more tragedies in India.