In The Wake Of Nuclear Disaster, Animals Are Thriving In The Red Forest Of Chernobyl

From elk to boars to dogs, Chernobyl's animals have found an unexpected haven for wildlife in the Red Forest of the Exclusion Zone. 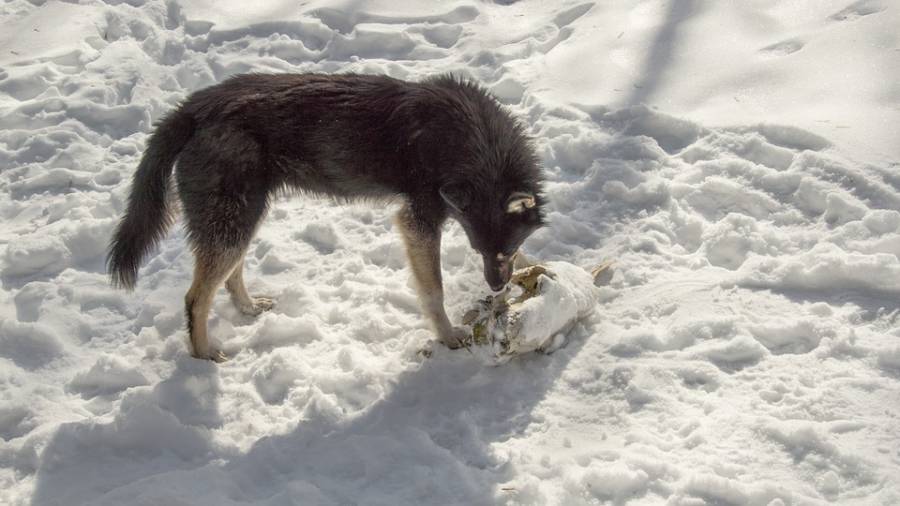 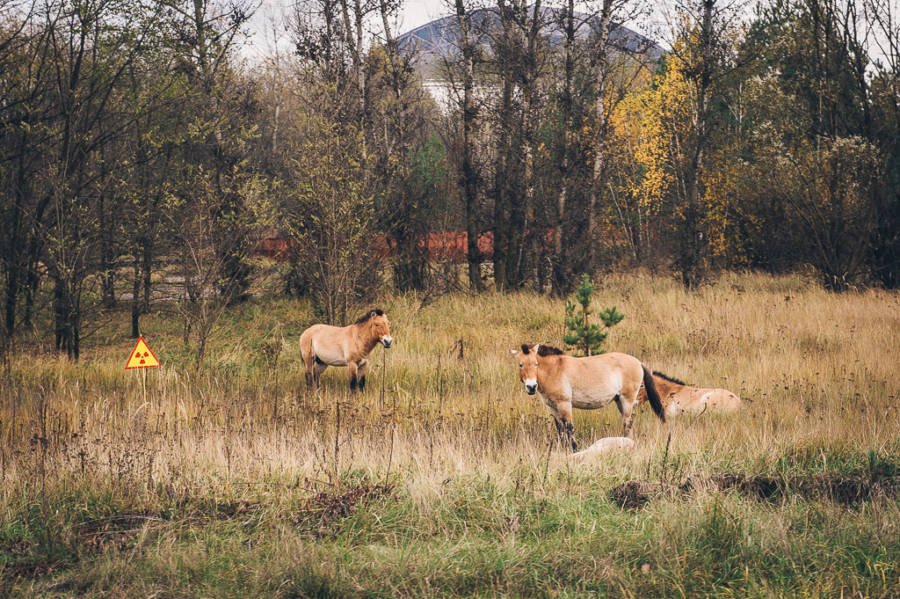 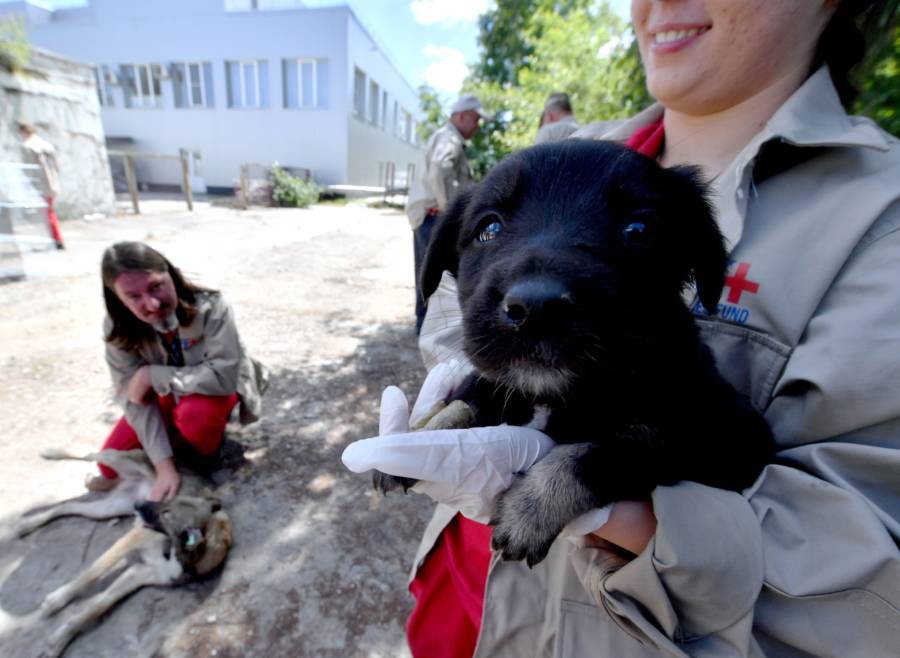 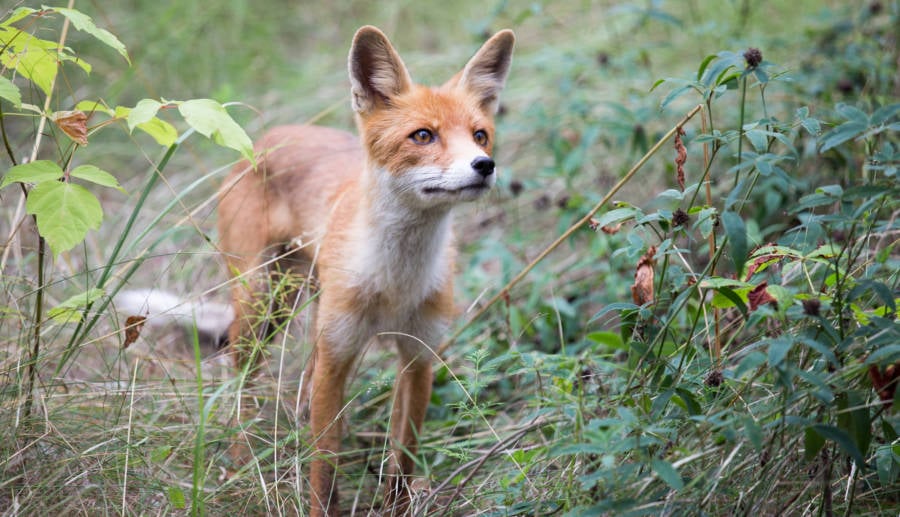 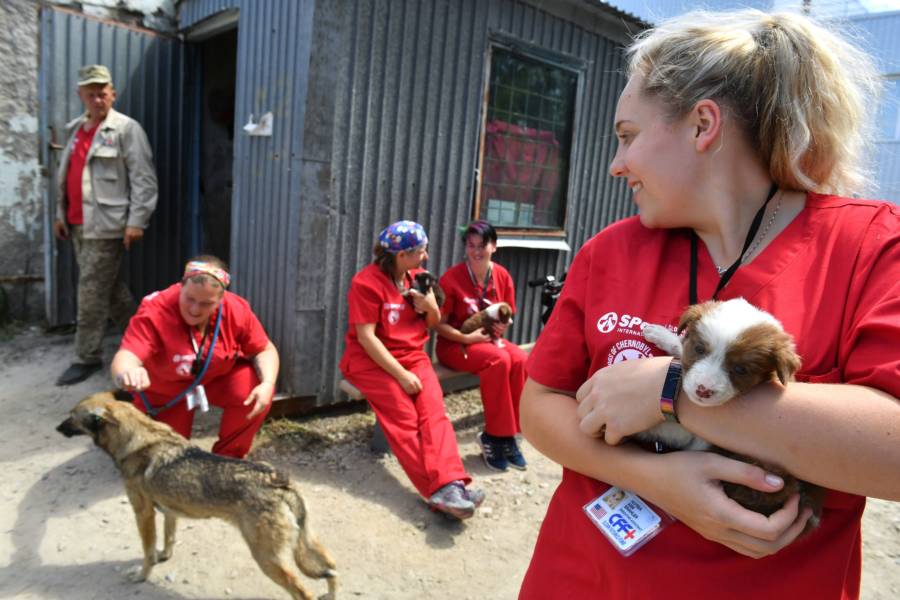 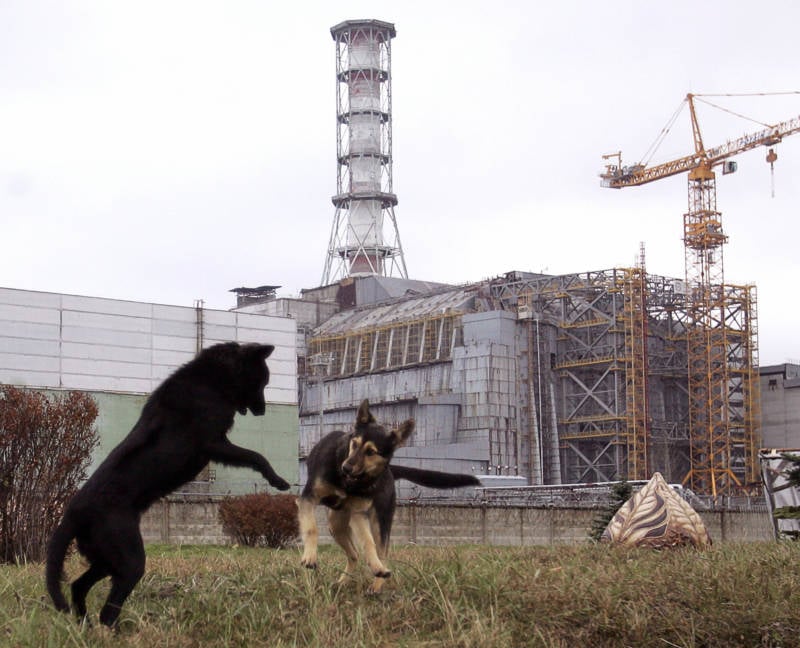 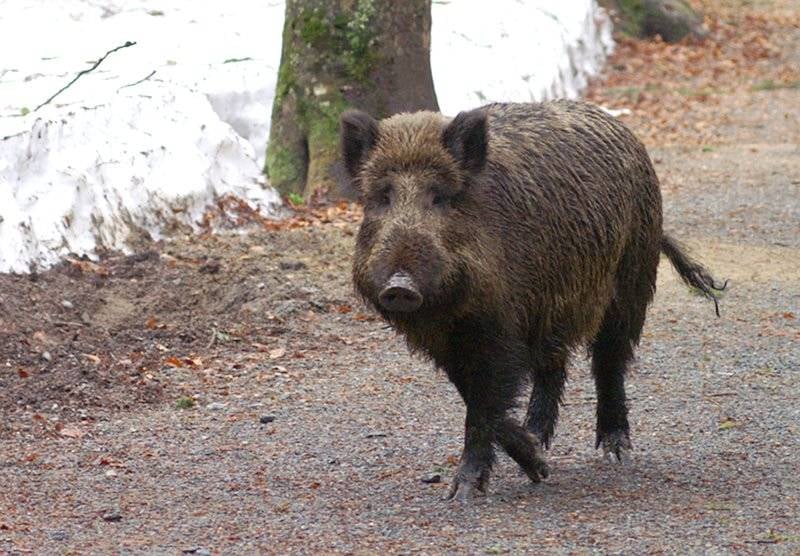 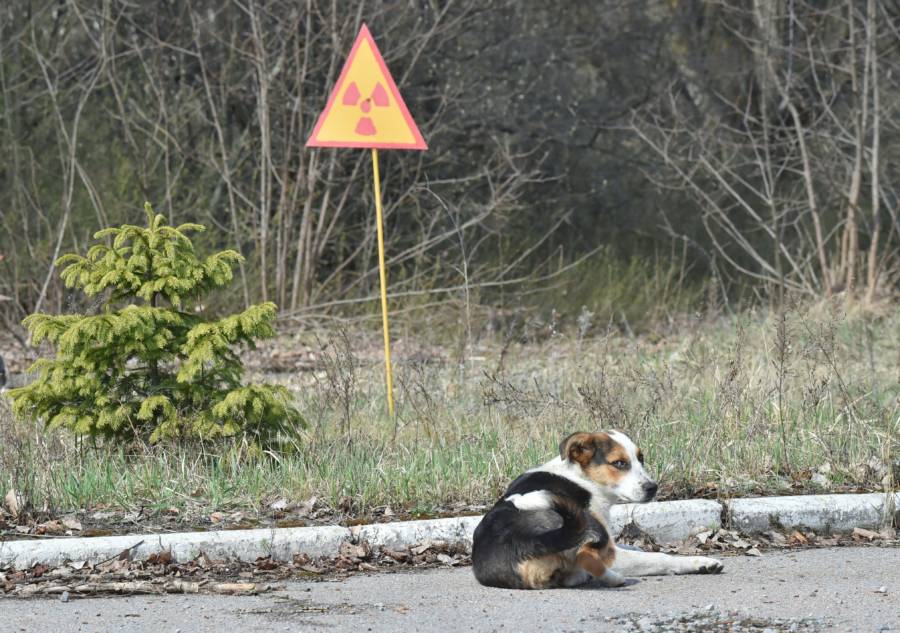 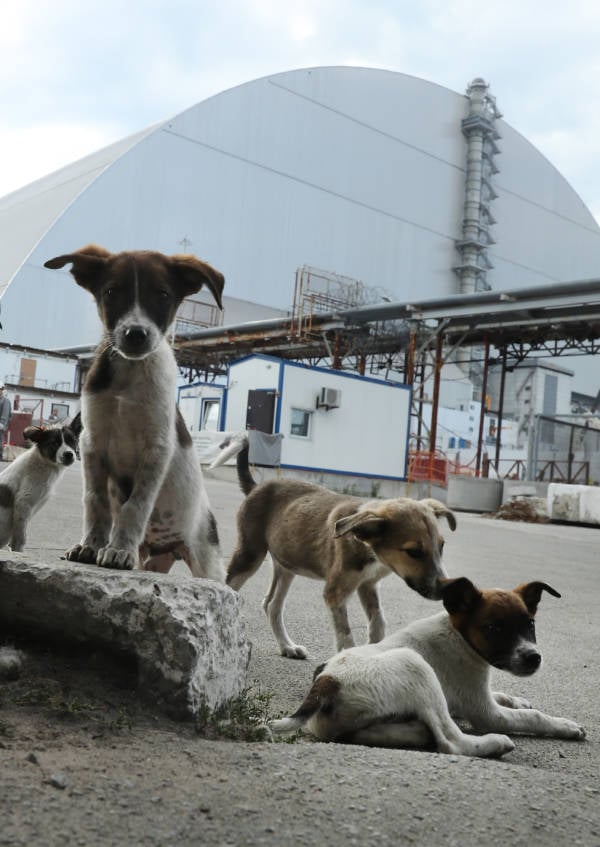 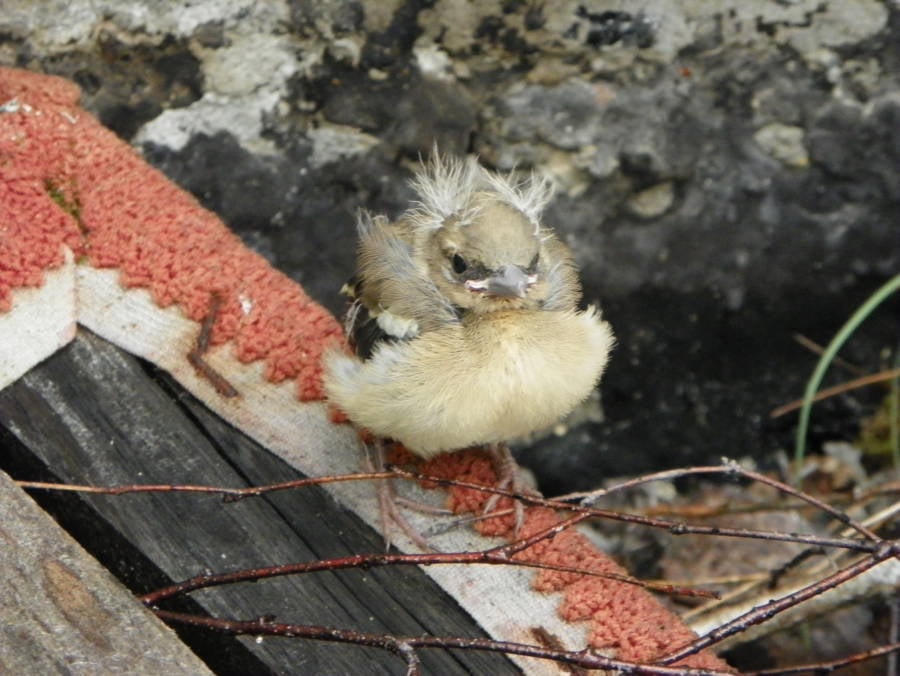 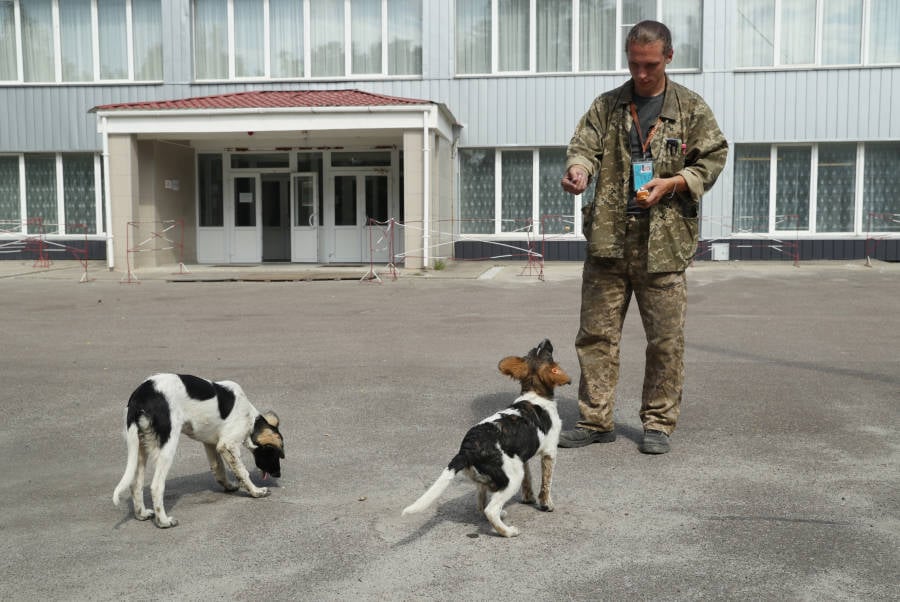 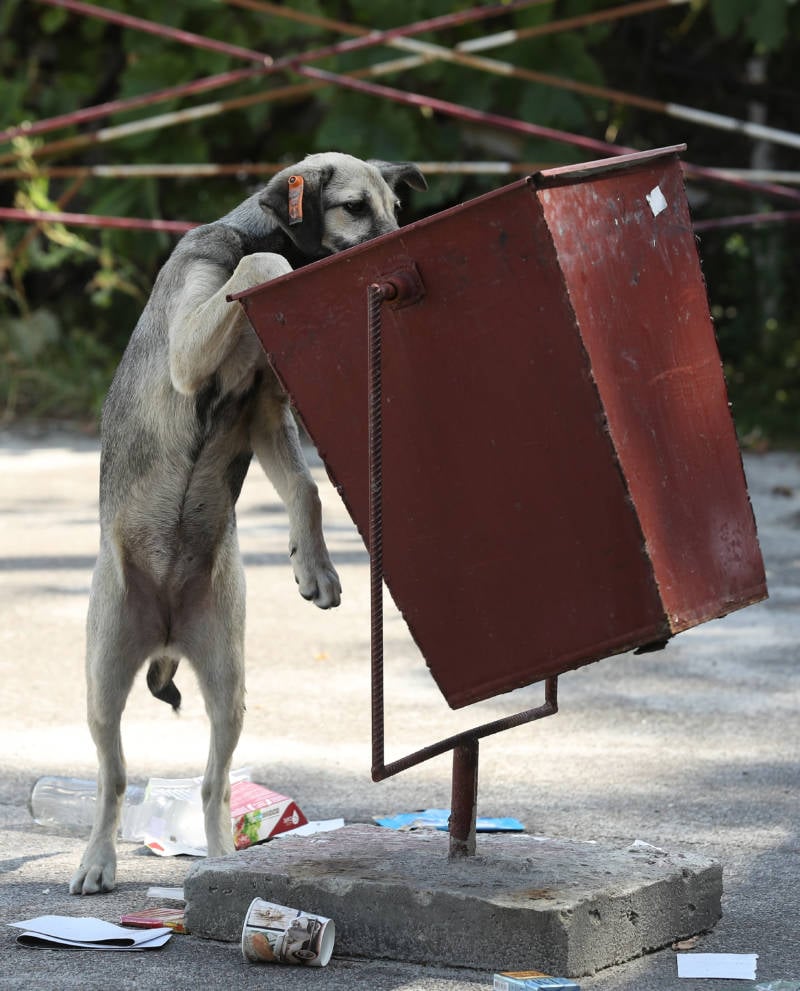 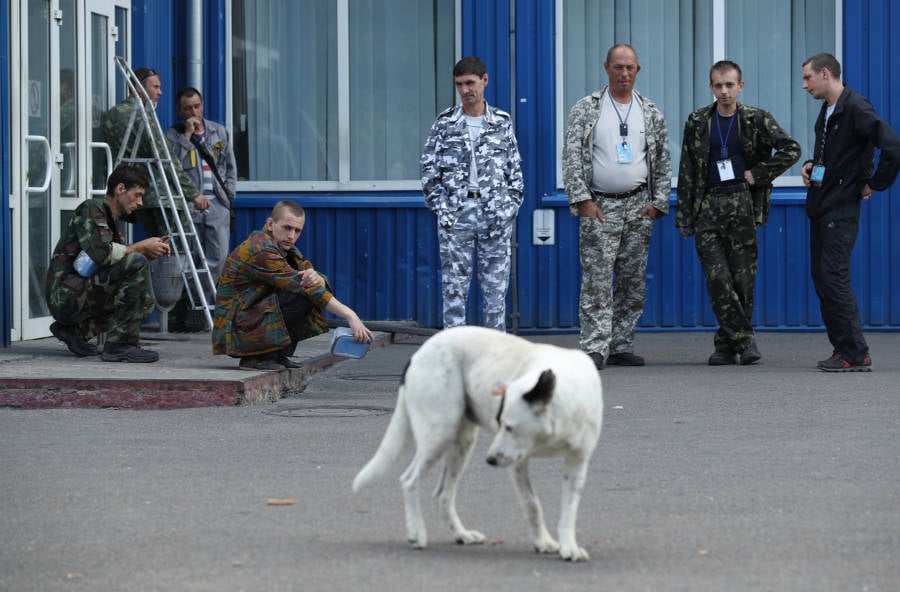 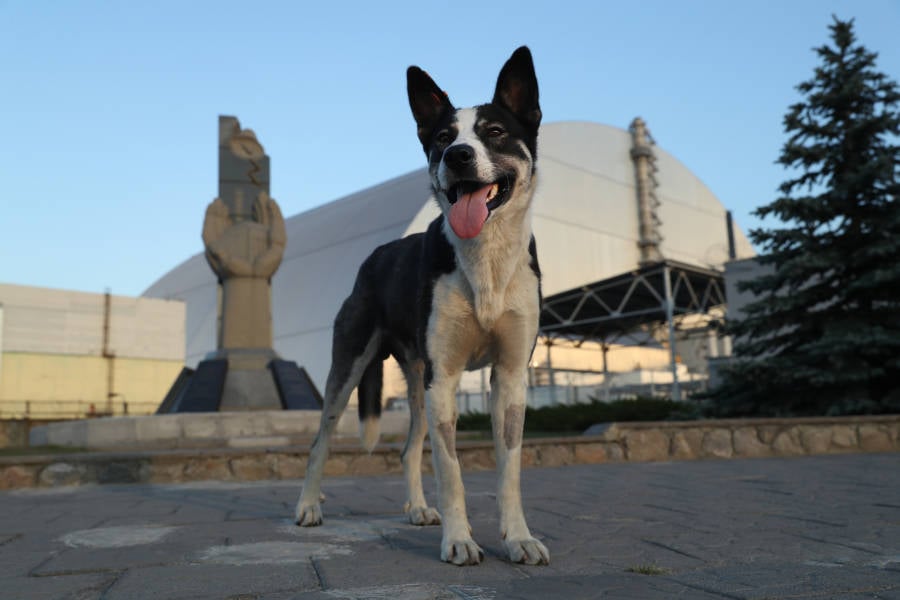 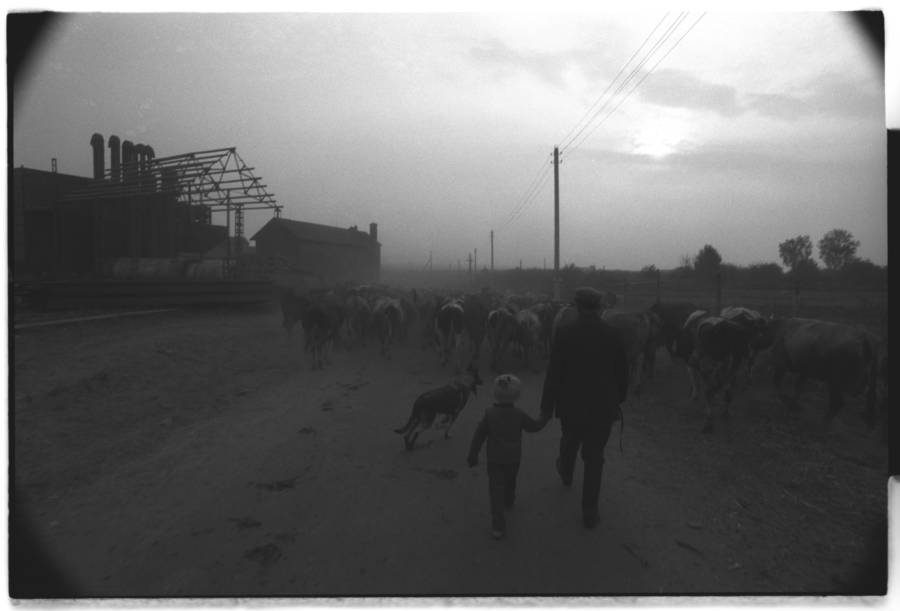 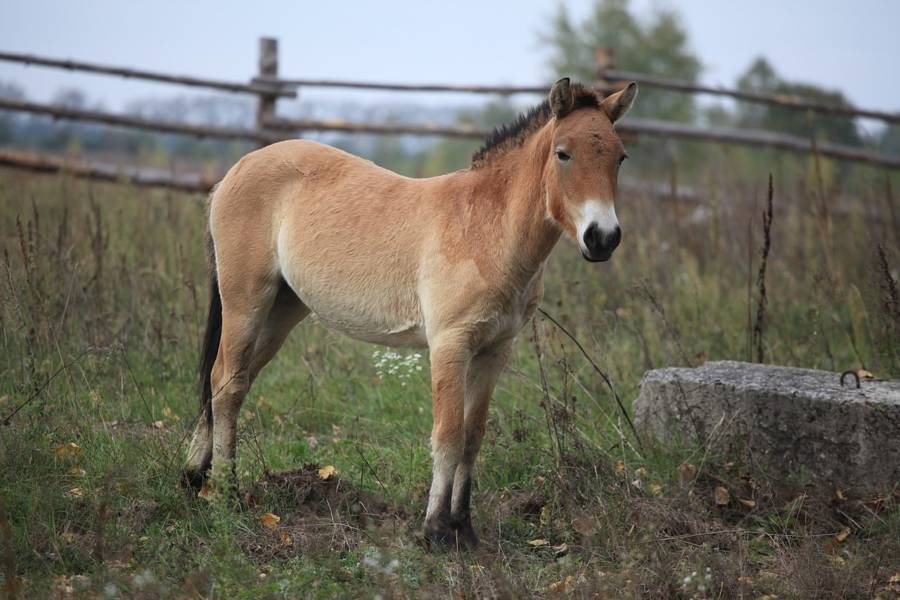 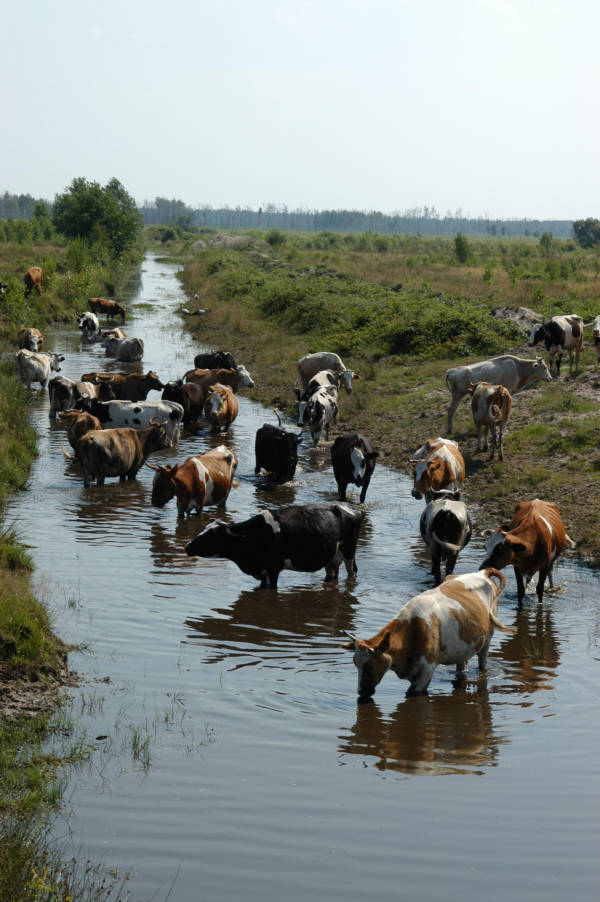 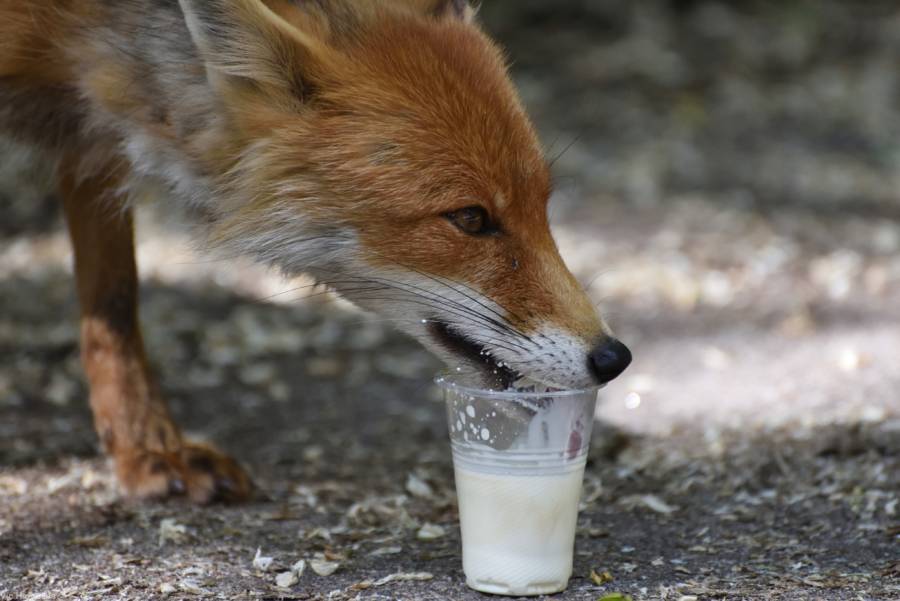 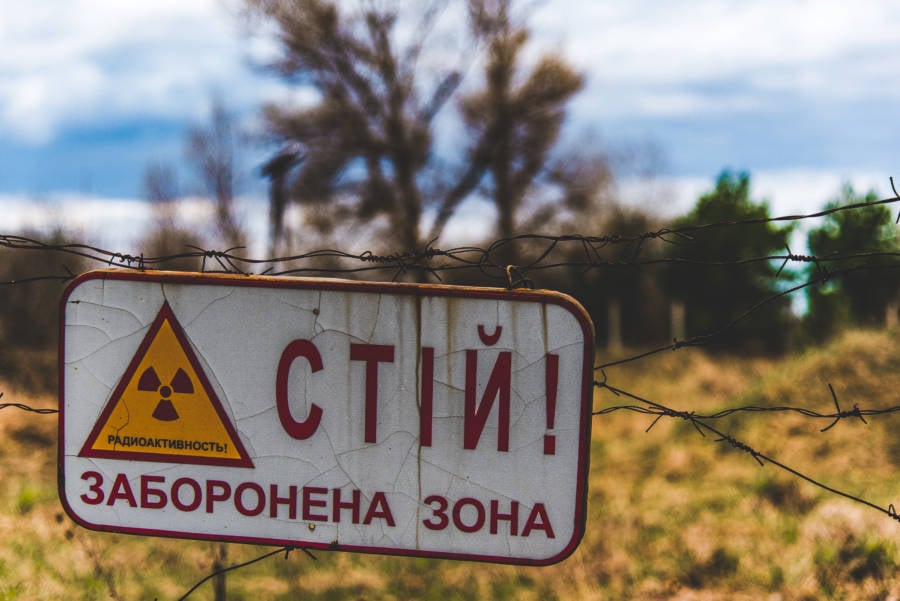 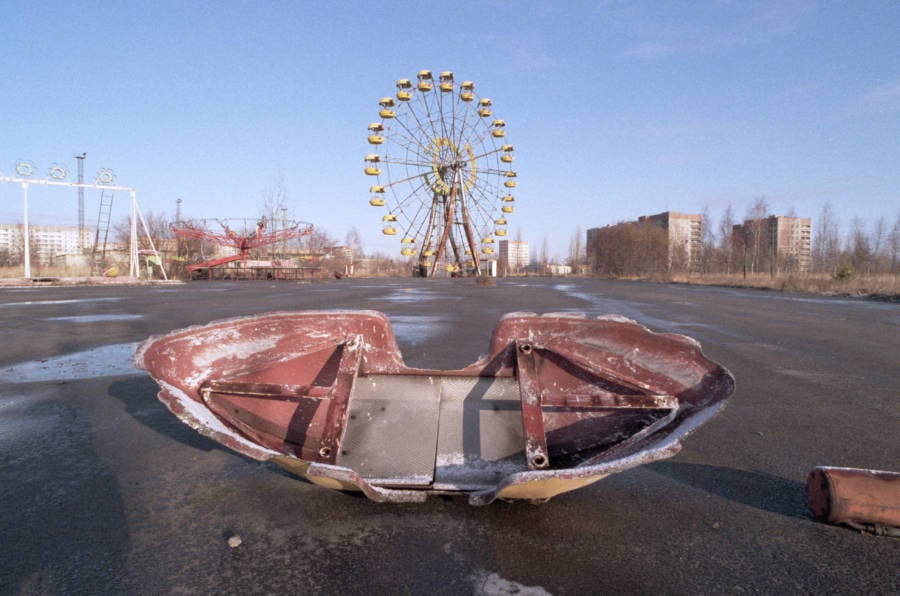 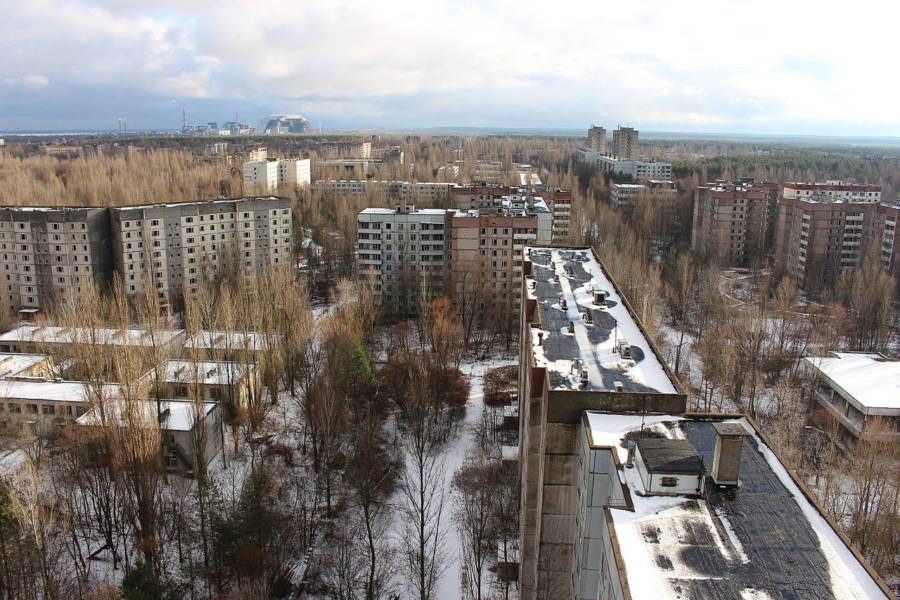 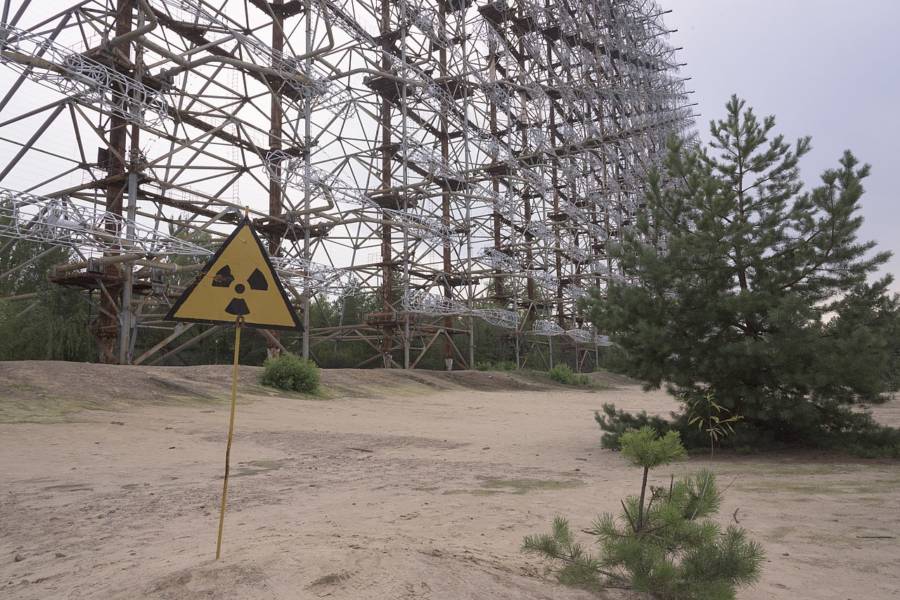 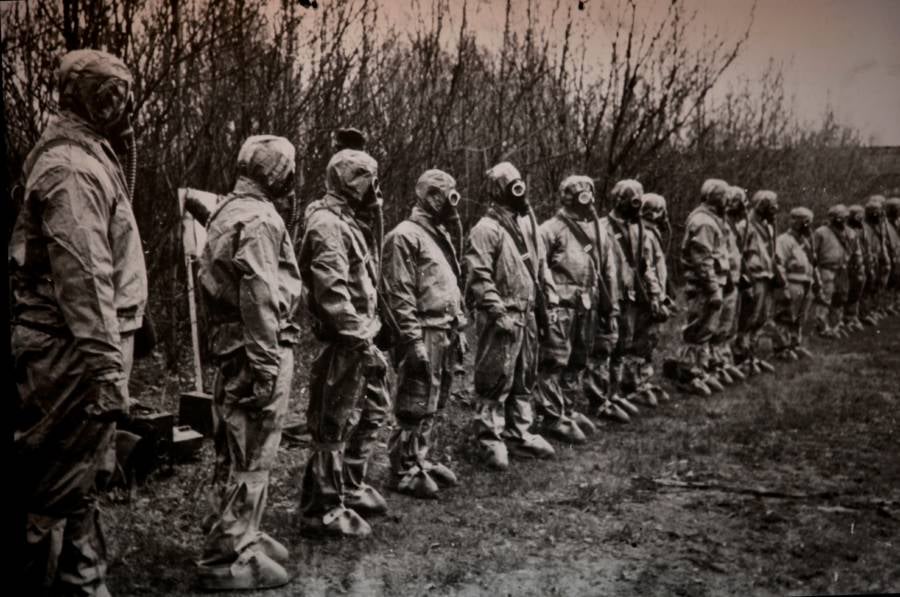 1 of 24
A stray dog forages for a skull in the harsh winter surrounding Chernobyl.Pixabay
2 of 24
A couple of Przewalski's Horses graze near a caution sign in Chernobyl's exclusion zone. The endangered horses were reintroduced to the area and now found to be thriving.Flickr/Michael Kötter
3 of 24
A volunteer of Clean Futures Fund (CFF) holds a stray puppy outside the improvised animal's hospital just near the Chernobyl power plant. SERGEI SUPINSKY/AFP/Getty Images
4 of 24
A fox in the Red Forest.Flickr/Alan
5 of 24
CFF workers gather dogs to determine if they are healthy enough for possible adoption. SERGEI SUPINSKY/AFP/Getty Images
6 of 24
Dogs play in front of the nuclear power plant. SERGEI SUPINSKY/AFP/Getty Images
7 of 24
A good chunk of Germany's wild boar population remains slightly radioactive since Chernobyl's explosion. ArcticWoof/Flickr
8 of 24
A dog is seen next to a warning sign for radioactivity next to the Red Forest in the ghost city of Pripyat.SERGEI SUPINSKY/AFP/Getty Images
9 of 24
Stray dogs loiter inside the high-security "local zone" outside the new enclosure that covers devastated reactor four. Sean Gallup/Getty Images
10 of 24
A harrowed-looking little bird seen in the Chernobyl exclusion zone.Wikimedia Commons
11 of 24
Sergey Shamray, a worker at the Chernobyl nuclear power plant, tosses pieces of bread to stray dogs outside the workers cafeteria. Sean Gallup/Getty Images
12 of 24
A tagged stray sniffs for food in a trash can inside the exclusion zone. Sean Gallup/Getty Images
13 of 24
Workers on a break watch a stray dog saunter by outside an administrative building. Sean Gallup/Getty Images
14 of 24
A stray in front of a monument by reactor number four. Sean Gallup/Getty Images
15 of 24
In the aftermath, a herder and child (accompanied by a dog) lead their livestock back to the village after the cows spent the day grazing on grass contaminated with cesium-137. Igor Kostin/Sygma via Getty Images
16 of 24
The Przewalski's Horse has been introduced into the wild of the Chernobyl Exclusion Zone, and scientists estimate that the number of horses has grown since.IAEA Imagebank/Wikimedia Commons
17 of 24
Efforts are underway to revitalize the land around Chernobyl. Water drainage trenches — like this one being enjoyed by cattle —remove excess water from the peaty soil as a first step. Petr Pavlicek/IAEA/Flickr
18 of 24
A fox in the Chernobyl Exclusion Zone. Vic Harkness/Wikimedia Commons
19 of 24
Over 30 years after the nuclear disaster of Chernobyl, the city of Pripyat is exactly as it was the day it was evacuated. Andreas Jansen / Barcroft Images / Barcroft Media via Getty Images
20 of 24
Abandoned swing boat and ferris wheel in the Pripyat Central Park, an evacuated town close to the Chernobyl power station, November 1995. Martin Godwin/Getty Images
21 of 24
Aerial view of the Chernobyl Exclusion Zone. January 2015. Alexander Blecher/Wikimedia Commons
22 of 24
A sign warning of the possible presence of radiation. Hnapel/Wikimedia Commons
23 of 24
Workers in radiation-proof gear assist in the aftermath of the Chernobyl disaster. Francois LOCHON/Gamma-Rapho via Getty Images
24 of 24 In The Wake Of Nuclear Disaster, Animals Are Thriving In The Red Forest Of Chernobyl
View Gallery

Contrary to what one might assume, Chernobyl — the site of the deadliest nuclear accident in history — is a virtual refuge for wildlife. From deer, wolves, and dogs to more exotic species like lynx and uniquely named Przewalski's horse, the animals of Chernobyl and the surrounding Red Forest are numerous. Which begs the question — what is more dangerous to the world's wildlife: radioactivity or mankind?

The Chernobyl disaster happened in the Ukrainian town of Pripyat in April of 1986. A nuclear reactor exploded and released radioactive fallout that necessitated the quarantine of a 30-mile perimeter called the Chernobyl Exclusion Zone. 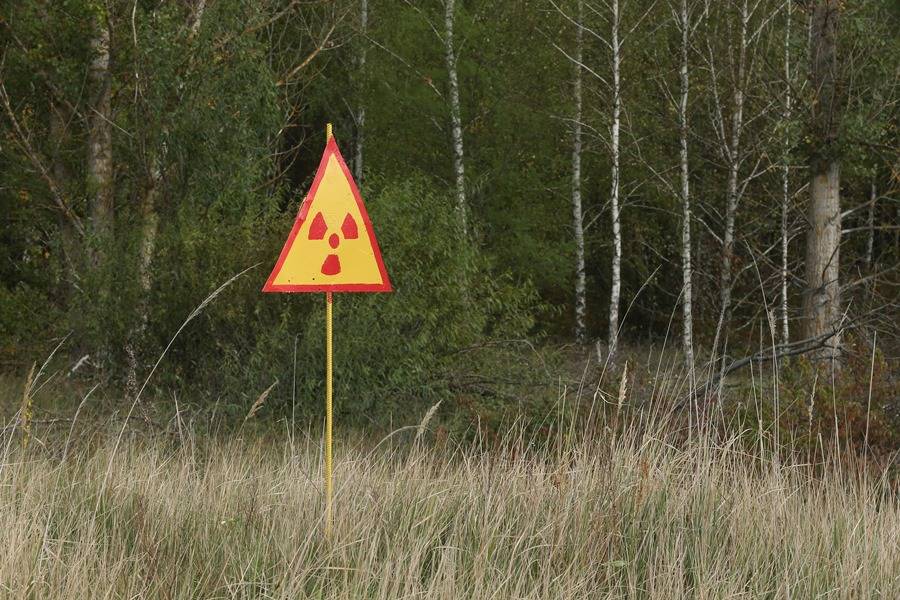 Within the exclusion zone lives the Red Forest, a 4-square-mile area surrounding the Chernobyl nuclear power plant named for the hue of the pine trees after they died en masse from high levels of radiation.

In the past three decades, this area has grown to encompass about 1,600 square miles called Chernobyl's exclusion zone — and consequently contains a mass of radioactive animals.

The Animals Of Chernobyl: Wild Dogs 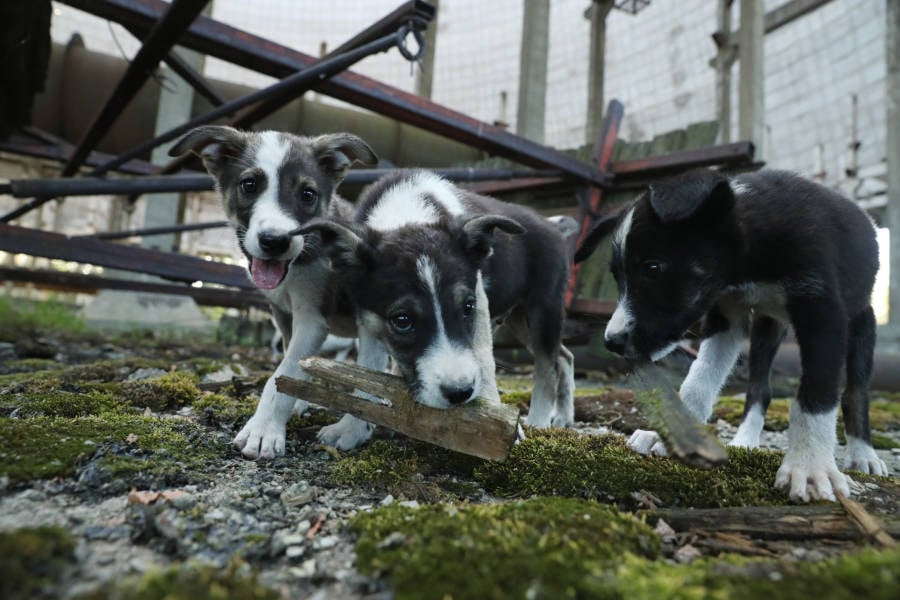 Some animals fare better than others within the exclusion zone.

For instance, Chernobyl's stray dogs — descendants of pets left behind by fleeing owners — need to rely on the kindness of people. Workers in Chernobyl's exclusion zone often share their lunches with the hundreds of strays that roam the area. Sadly, most dogs here don't live past the age of four. Ukraine's harsh winters — not necessarily radioactivity — are mostly to blame for their early deaths.

Workers at the plant are advised not to touch the dogs, as radioactive particles can exist on their fur. It's a difficult task to protect these animals from the dangers at Chernobyl's exclusion zone, but special groups are trying.

"The rules of man mean nothing to the world of dog. They lay, they dig, they roll around, they drink puddles" says Lucas Hixson co-founder of Clean Futures. The group is making some of Chernobyl's dogs available for adoption — after a strict vetting and decontamination process, of course.

Stray dogs aside, other species of Chernobyl's animals actually appear to be thriving.

National Geographic captures the unexpected turnaround of Chernobyl and the Red Forest as a animal refuge.

In fact, the whole ecosystem has seen great rebounds even just a few years after the incident.

Shockingly, the large animal population on the Belarus side of the Chernobyl exclusion zone has also increased in the years since the tragedy. Moose, boars, and especially wolves are found in greater numbers than ever before. Scientific findings report that Chernobyl's wolves may occur in higher densities than within Yellowstone Park.

Specifically, wolves may get some protection from radiation by traveling further outside the Chernobyl exclusion zone for longer periods. But just how detrimental the radiation is to Chernobyl's animals is still debated.

How Radioactivity Is Affecting Chernobyl's Animals 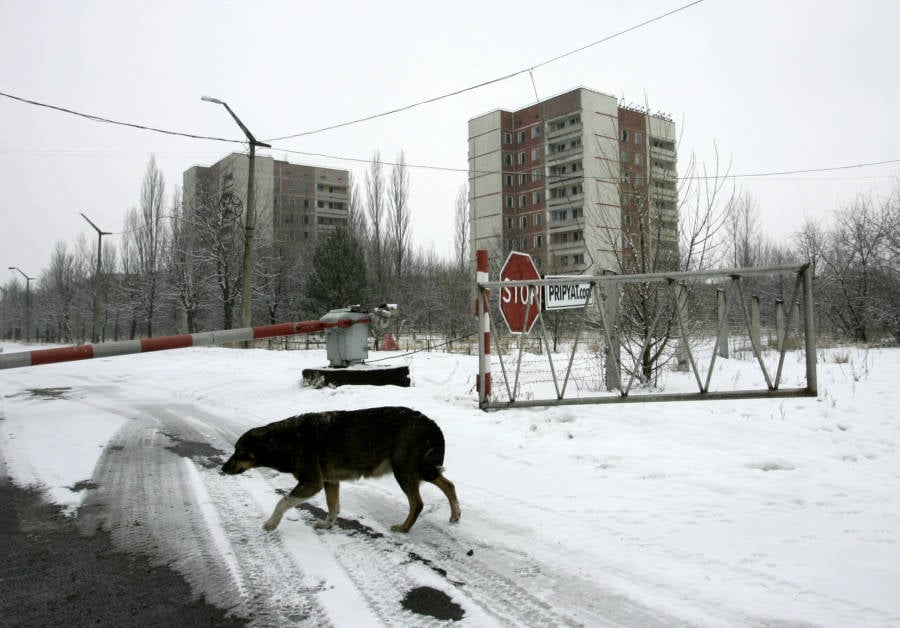 There is little doubt that animals exist in great numbers within the exclusion zone. But at what cost to their health? Two opposing scientific camps have their own theories on the matter. Both sides concur that radiation is certainly not an optimal scenario for the wildlife — but is it, let's say, less harmful than the presence of humans?

"These animals in Chernobyl and Fukushima live 24 hours a day in these contaminated sites. Even if the actual dose for one hour is not extremely high, after a week or after a month, it adds up to a lot. These effects are certainly at a level where you could see dramatic consequences."

The New York Times films biologist Timothy Mousseau as he investigates the animals of Chernobyl.

Whereas biologist Jim Beasley of the University of Georgia's Savannah River Ecology Laboratory suggested that given their data, the radiation levels can't be too harmful. "Even if they're [radiation] there, they probably aren't enough to suppress populations to the point where they can't sustain themselves ... humans have been removed from the system and this greatly overshadows any of those potential radiation effects."

However, given the migratory nature of some animals, there's more to think about than just wildlife within the exclusion zone and the Red Forest.

"I don't want to say that animals from Chernobyl are contaminating the world," assistant ecology professor at the University of Missouri Michael Byrne reported. "But if there are any forms of mutations that could be passed on, it's a thing to consider."

After seeing the suprising animals of Chernobyl and the Red Forest, look through these photos of Chernobyl's aftermath, then discover the bonsai tree that even the Hiroshima bomb couldn't take down.