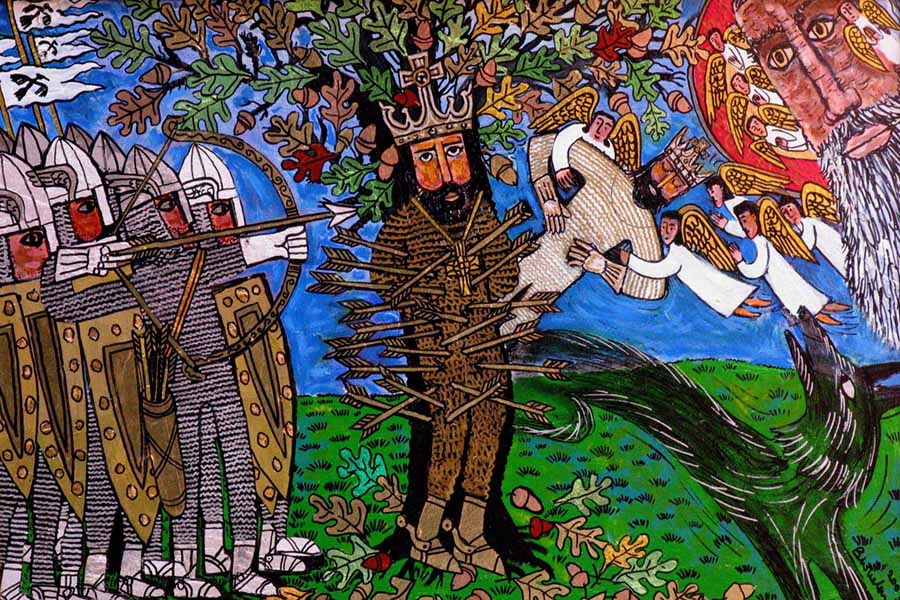 Edmund the Blessed fell on bad luck one day when a viking army led by Ivar the Boneless raided his kingdom of East Anglia (present-day England). The Vikings slaughtered the English people, and Ivar demanded that Edmund submit to his rule and become his vassal.

However, according to Abbo of Fleury’s 870 account of Edmund’s life, the king replied, “Never in this life will Edmund submit to Ivar the heathen war-leader, unless he submit first to the belief in the Saviour Christ which exists in this country.”

Edmund’s answer did not satisfy Ivar, so his army advanced on Edmund, who, hoping to make an example of his faith, threw down his weapons and allowed himself to be captured. The Vikings tied him to a tree and beat him with whips and iron rods. Edmund continued to profess his faith, so the soldiers threw spears at him until he looked as though he had, as Abbo wrote, the “bristles of a hedgehog.” Finally, Ivar cut off his head.

Not content with merely severing the head, Ivar’s goonies felt the need to conceal it and thus prevent it from being buried with Edmund’s body. So they took Edmund’s head to a nearby forest and hid it. That plan ran amok when Edmund’s faithful followers went looking for it in the forest, calling out, “Where are you now, friend?” Legend holds that the head answered, “Here, here, here!”

As only Christian martyr stories would have it, Edmund’s head hunters found the animated appendage cradled between the paws of a wolf charged with its protection. They then buried the head along with the body. When Edmund’s body was later exhumed so that a church could be built near his grave, workers supposedly found his body with the head miraculously reattached. 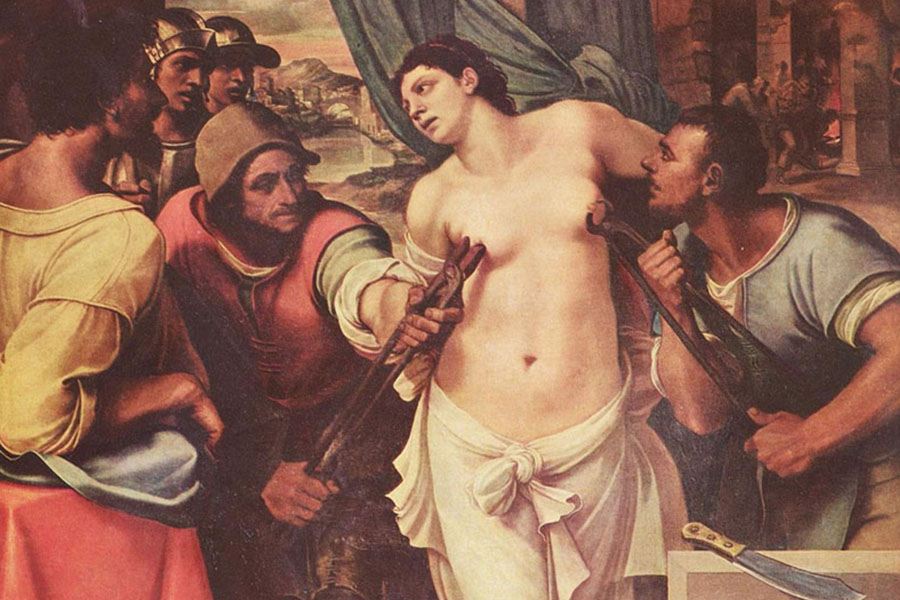 According to the The Golden Legend or Lives of the Saints, compiled by the Archbishop of Genoa in 1275, Agatha hailed from a noble Christian family on the island of Sicily. The family — especially Agatha — would fall on bad luck when then the Roman emperor Decius delivered an edict persecuting Christians. In response, the governor of Sicily used the edict to attempt to blackmail Agatha: If she married him, the governor said, he wouldn’t report her as a Christian to Roman authorities.

Agatha rejected the governor’s advances, however, so he had her thrown into a brothel where he thought she would be defiled. Yet after a month, her purity remained intact. Realizing that Agatha could not be humiliated at the brothel, the governor instead threw her in prison, where she was tortured and had her breasts cut off.

As Agatha exhibited religious fealty, legend says that Peter and an angel came to her in her cell and healed her wounds.

Her recovery astounded the governor, though he did not relent in torturing the pious Agatha: Some stories say he had her stretched on the rack, then rolled over shards of glass and hot coals.

Still, her torture was not all in vain. As Agatha approached death, an earthquake shook the city, killing some of the governor’s friends. Now struck with fear, he had Agatha thrown back into prison, where she died of her wounds. 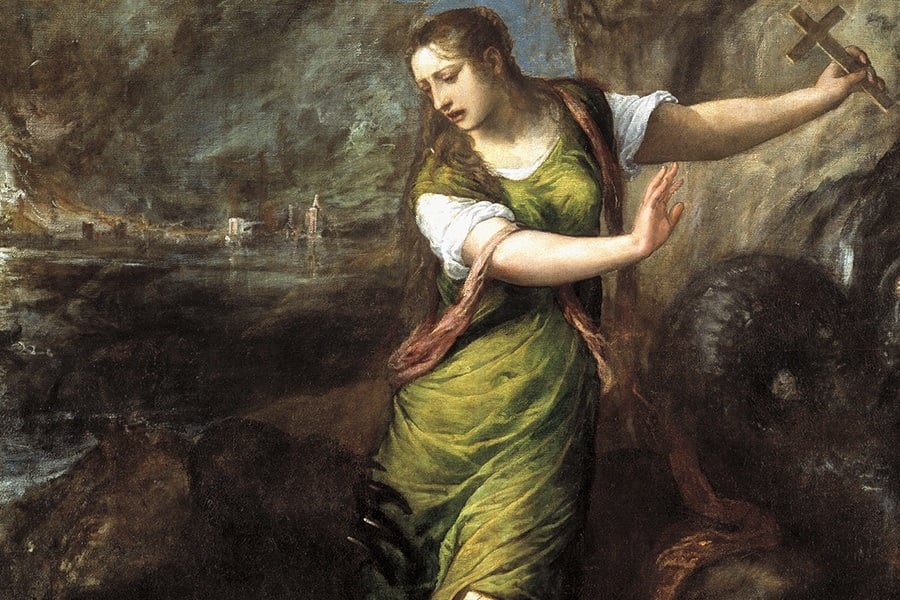 Wikimedia Commons St. Margaret and the Dragon by Titian

Saint Margaret’s life began with tragedy and misfortune: Her father was a pagan priest, and her mother died right after childbirth. A Christian woman nursed Margaret far away from home, and as soon as she reached maturity she denounced paganism. Margaret’s father disowned her, but her former wet nurse adopted her.

That’s not Margaret’s happy ending, though. One day while tending her flock of sheep, a lustful Roman caught sight of her and attempted to force her to marry him. She denied his advances, and the man — now enraged — dragged her to Antioch, where she was put on trial. Of course, she refused to renounce Christianity, so she was tortured and then thrown into prison.

While locked up, a dragon appeared in Margaret’s cell. According to one version of the legend, the beast swallowed her whole, but the cross she carried irritated the dragon’s stomach, allowing her to crawl back out of its mouth. In another version, she merely makes the sign of the cross and the demon disappears.

Though Roman authorities attempted to continue to torture Margaret with flaming torches and submerge her in ice cold water, nothing seemed to harm her. Like so many of the other martyrs, her silence would only come with a beheading.