By analyzing 103 skulls of early Caribbean inhabitants, experts were able to reassess when and where they settled. This, in turn, lent credence to Columbus' infamous tales of cannibalism. 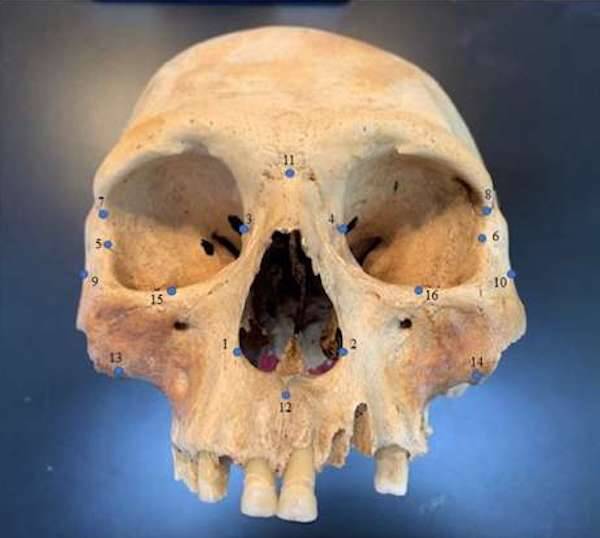 In recent years, Christopher Columbus has been increasingly considered more of a ruthless conquerer than a well-intentioned pioneer as taught to us in school. According to Eureka Alert, however, the explorer’s long-dismissed stories about cruel Carib raiders in the Caribbean — who abducted women and cannibalized men — may have actually been true.

This historical reassessment by researchers saw experts analyze the skulls of 103 early Caribbean inhabitants dating between 800 A.D. and 1542. This allowed them to clearly distinguish between groups of people, and clearly establish just how these islands were originally colonized. Published in the Scientific Reports journal, the findings concluded that the Carib people were, indeed, living in the Bahamas as early as 1000 A.D.

According to Live Science, this consequently means Columbus’ descriptions of the terrifying raids may well have been accurate. This has also forced experts in the field to reconsider everything they thought they knew about early settlements in the region.

How the various indigenous groups interacted with each other — and the foreign invaders suddenly appearing on their shores — just got a whole lot more interesting. 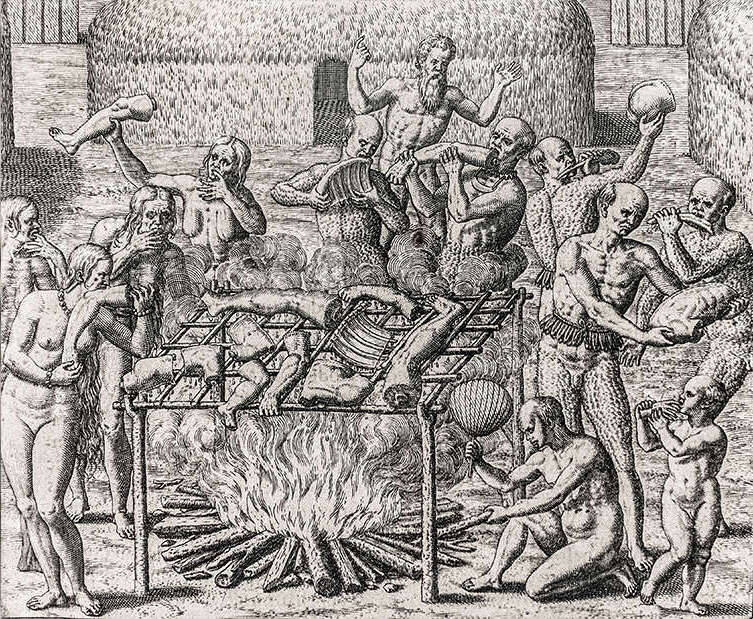 The claims so collectively disputed refer to the Caniba — a tribe of marauding cannibal warriors — which Columbus recorded in his diaries. He wrote that they regularly attacked his crew after they arrived in 1492.

Since no physical evidence exists that these tribal warriors were cannibalistic, the explorer’s claims were sidelined as hyperbole by most. The Caniba were, however, a real group of South Americans — better known as the Caribs.

“I’ve spent years trying to prove Columbus wrong when he was right: There were Caribs in the northern Caribbean when he arrived,” said study co-author William Keegan.

The accounts of Columbus described the modern-day Bahamas as being comprised of the Arawak and the Caniba people. He called the former “the best people in the world,” while the latter were merciless killers who ate their enemies.

The term “cannibal” actually has etymological roots in “Caniba,” which the explorer reportedly learned from the gentle Arawak people. 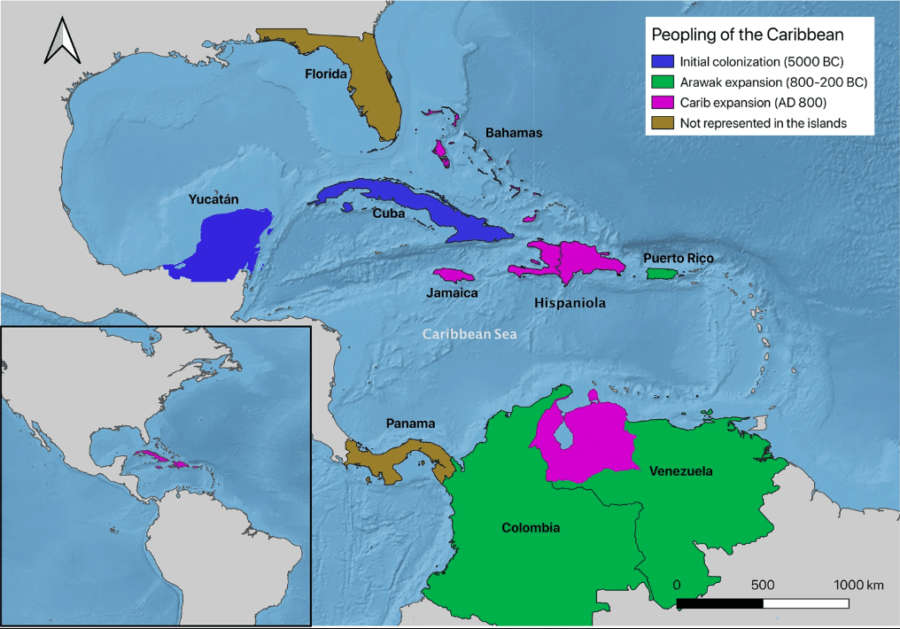 Though there is pottery suggesting the South American Carib (or Caniba) people made it as far north as Guadalupe — which is around 1000 miles south of the Bahamas — that evidence is rather thin. The vessels could have naturally arrived there by countless other means.

To garner a more accurate picture of the region during that period, researchers relied on the morphology of skulls. Borrowed from Caribbean museums and collections, these bones allowed experts to compare and contrast, and more closely pinpoint the cultural origins of these individuals.

As a result, researchers identified three separate groups of migrants. The earliest settlers of the Caribbean were found to have come from the Yucatán before moving into modern-day Cuba and the Northern Antilles.

The Arawaks from modern-day Colombia and Venezuela migrated to Puerto Rico between 800 and 200 B.C. Pottery evidence lends further credence to this conclusion.

The Caribs, meanwhile, arrived in Hispaniola around 800 A.D. They then expanded into Jamaica and the Bahamas, where they were well-established by the time Columbus arrived. 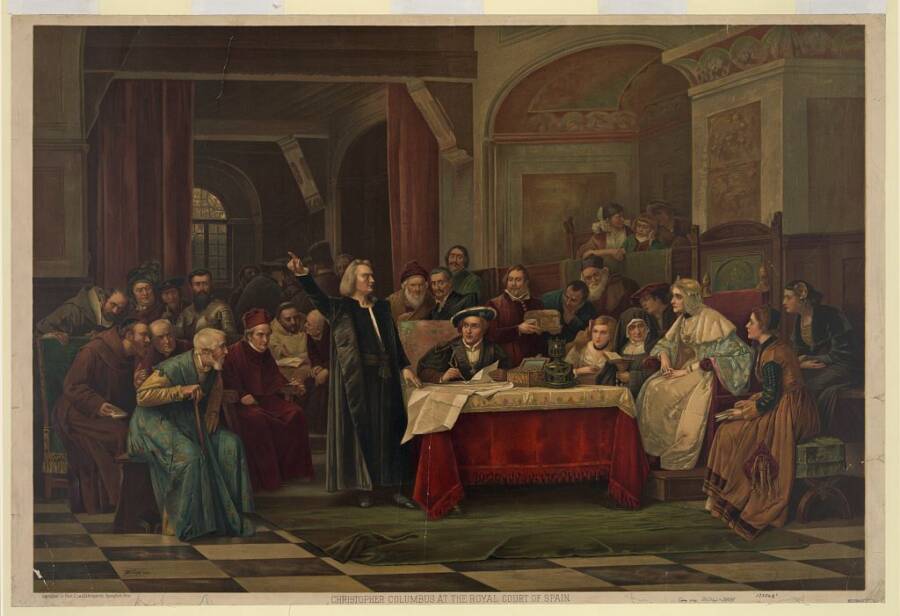 Library of CongressChristopher Columbus depicted at the Royal Court of Spain, presenting his request of exploration to Queen Isabella I and Ferdinand V. Researchers believe once he labeled the Caribs as cannibals, the crown had no qualms about inhumane treatment of all in the region.

As for the cannibalism, no undeniable evidence has yet been presented. According to IFL Science, Keegan is far from ruling it out as a natural strategy possibly employed back then.

“Maybe there was some cannibalism involved,” he said. “If you need to frighten your enemies, that’s a really good way to do it.”

Unfortunately, whether true or not, accounts in which Columbus described locals with “marks of wounds on their bodies” and other “people from other islands nearby” coming to “take them” led to even more violence and inhumanity — from the colonists.

“The crown said, ‘Well, if they’re going to behave that way, they can be enslaved,'” said Keegan. “All of a sudden, every native person in the entire Caribbean became a Carib as far as the colonists were concerned.”

Ultimately, while cannibalism may have been a small part of the regional warring taking place at the time, the subsequent colonization saw mass amounts of death arguably just as detestable. On the other hand, studies like this may suggest how the disparate Caribbean populations operated — and how colonists, subsequently, punished them for it.

After learning about the new study lending credence to claims by Christopher Columbus that there were actual Caribbean cannibals, read about Leif Erikson, the Viking who probably beat Columbus to the Americas by 500 years. Next, go inside Stalin’s “Cannibal Island.”