When a resident of Ailuk saw an abandoned boat in the waters, he tried to carry it ashore. Oddly enough, it was far heavier than it looked — with 1,430 illegal reasons why. 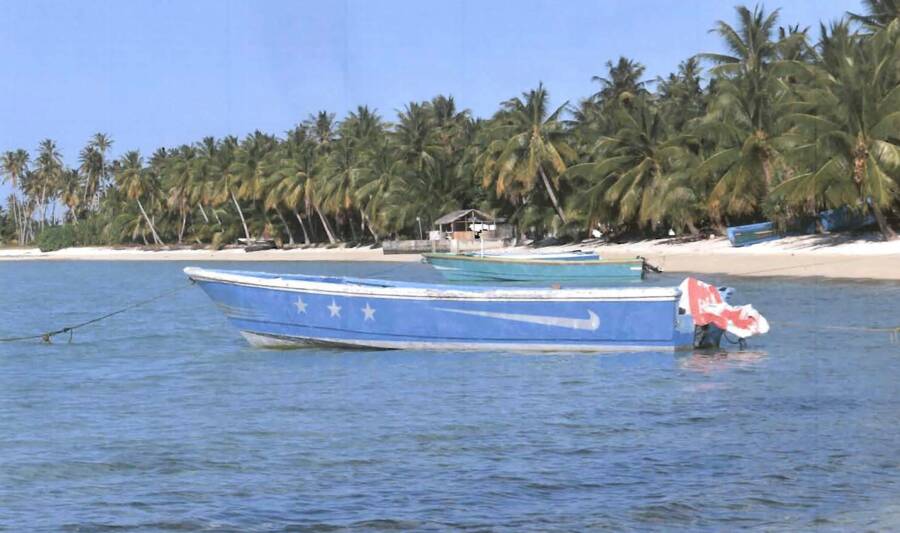 As a series of coral and volcanic atolls between the Philippines and Hawaii, the Marshall Islands are a natural wonder to behold. It’s likely because of their remote nature that the latest news to wash ashore was such a shock.

Not only did an empty boat with 1,430 pounds of cocaine drift onto a beach there, but it might’ve been at sea for years.

According to The Guardian, local authorities have confirmed that last week’s arrival is officially the largest haul of cocaine in the Pacific nation’s history. Attorney General Richard Hickson revealed that the colossal stash was found in a hidden compartment within an 18-foot fiberglass boat at the Ailuk atoll.

Marshall Islands police are no stranger to the realities of the global drug trade. According to Radio New Zealand, the country has seized hundreds of kilos across its atolls for decades. On the other hand, this singular shipment uncovered last week is unprecedented — with an estimated street value of $80 million.

As authorities incinerated all but two of the so-called “bricks” for the U.S. Drug Enforcement Agency (DEA) to thoroughly analyze, few clues remain. The blocks were wrapped in yellowed plastic stamped with a red logo bearing the letters “KW,” and likely originated from South or Central America. 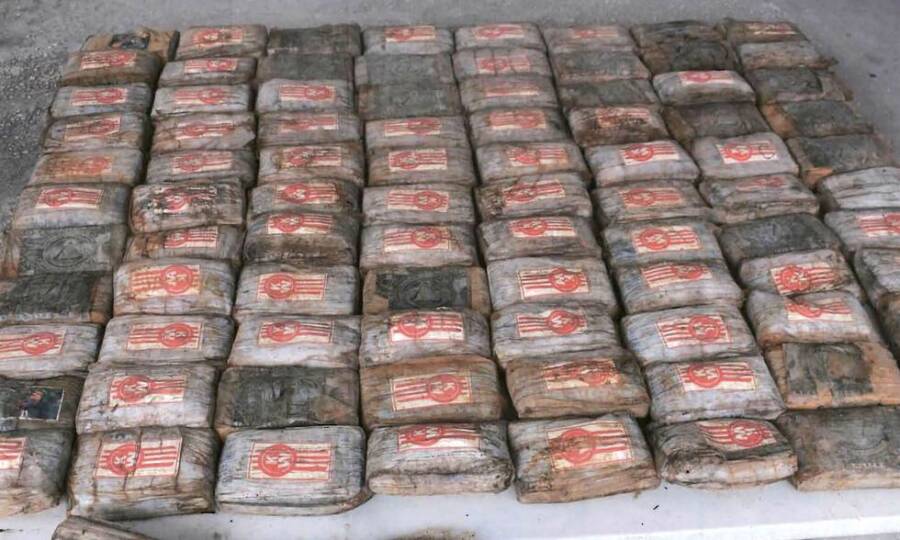 The initial discovery was made by Ailuk resident Kosby Alfred, one of only around 400 people who live there. According to CNN, he and other locals tried to carry the boat to land but noticed rather quickly that it was far heavier than it looked. Their curiosity got the better of them, and led to the discovery of the vessel’s payload.

“A local resident on Ailuk discovered a boat with 649 one-kilogram bricks of cocaine,” said Hickson.

While the hidden compartment below the ship’s deck was fascinating on its own merits, the contents within were staggering. Alfred’s subsequent call to the authorities saw police transport the drugs to the capitol of Majuro on another island, where all but 4.4 pounds were swiftly incinerated.

Officials were grateful for the immediate clarity on behalf of Ailuk’s residents, as previous cocaine wash-ups weren’t always reported. Resourceful citizens had often simply kept the drugs for themselves and filtered them into Majuro to make some easy money.

It was only a few months ago that an Ailuk man was arrested for transporting three kilograms of cocaine from the Northern atoll to Majuro. He admitted during initial questioning that there had been a lot more that washed up in the area last year.

According to Hickson, however, “This is a new lot of cocaine, just arrived.” 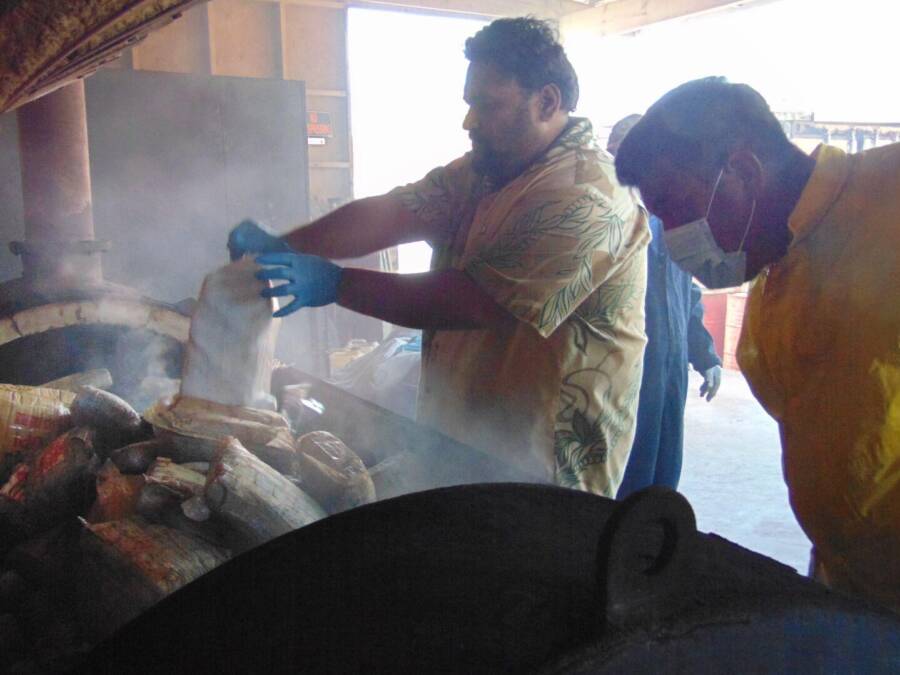 Once the drugs were found, Ailuk Mayor Redner Alfred had the Marshall Islands Police Department (MIPD) use its Lomor patrol vessel to seize the cargo. The bagged bricks were brought to Majuro on Monday, Dec. 14, and transported to a local company to incinerate the drugs on Tuesday.

Perhaps most intriguing at this juncture is where the drugs came from, and how long they had been at sea. According to MIPD’s Criminal Investigation Chief Captain Vincent Tani, each of the 649 bricks contained the curious clue of a “KW” stamped atop. The DEA is currently in possession of two of these.

Numerous theories have been floated regarding the shipment’s origins. From sea-based shipments gone wrong as a result of the attached radio beacons being lost to the cargo being tossed aboard in fears of being discovered. Storms and engine problems along the expansive route, too, are potential causes. 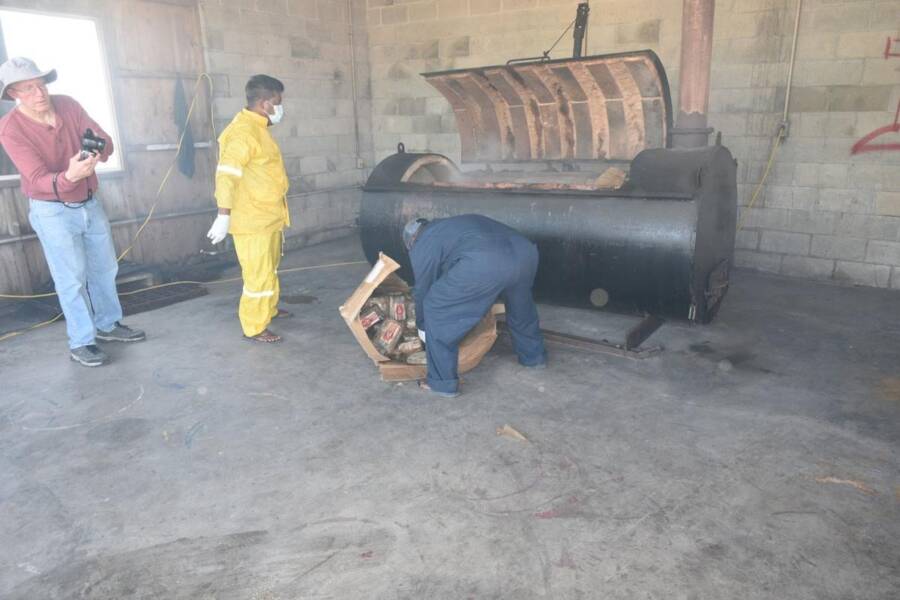 Marshall Islands Police DepartmentOnly the “KW” letters and logo atop each brick, alongside the abandoned boat itself, remain as potential clues of the illegal shipment’s origin.

Based on research conducted in 2014, the arrival of powerless boats in the region is no coincidence. When El Salvadoran fisherman Jose Alvarenga arrived at the southern Marshall Islands after 14 months adrift after leaving Mexico, University of Hawaii experts found that nearly all drift patterns wind up in these atolls.

Ultimately, the fiberglass boat discovered in Ailuk was rather similar to two others found carrying cocaine a few years ago. Tani explained that each boat had distinct markings, such as a variation of the Nike “swoosh” symbol and a dolphin painted on the side. There was one common denominator, however.

“All three boats had three stars on them,” said Tani.

As it stands, it appears that many of those who live in the tropical Marshall Islands paradise are satisfied not to report these incidents. Drug use and availability has become so rampant in the region that the country’s parliament established an exclusive task force to deal with it in May.

As these islands sit along a major international drug trafficking route, it’s no wonder that straggling vessels with hefty payloads are found on a regular basis.

The only question now, it seems, is whether or not regulating these drugs — instead of allowing the black market to profit — could provide a more humane solution.

After learning about the ghost boat with 1,430 pounds of cocaine washing ashore the Marshall Islands, take a look at these shameless vintage cocaine ads from the 1970s. Then, learn about Félix Gallardo — “the Bill Gates of cocaine” who made Mexico a narcotrafficking capital.