The massive coelacanth was thought to have died off over 60-million-years ago, but its 1938 discovery in South Africa shocked the scientific world.

But on a dewy morning in December 1938, a South African museum curator shockingly rediscovered them — alive.

Previously thought to be a living fossil, as scientists were confident that the 1938 specimen was the last remaining coelacanth, later studies revealed that the species is far more diverse. 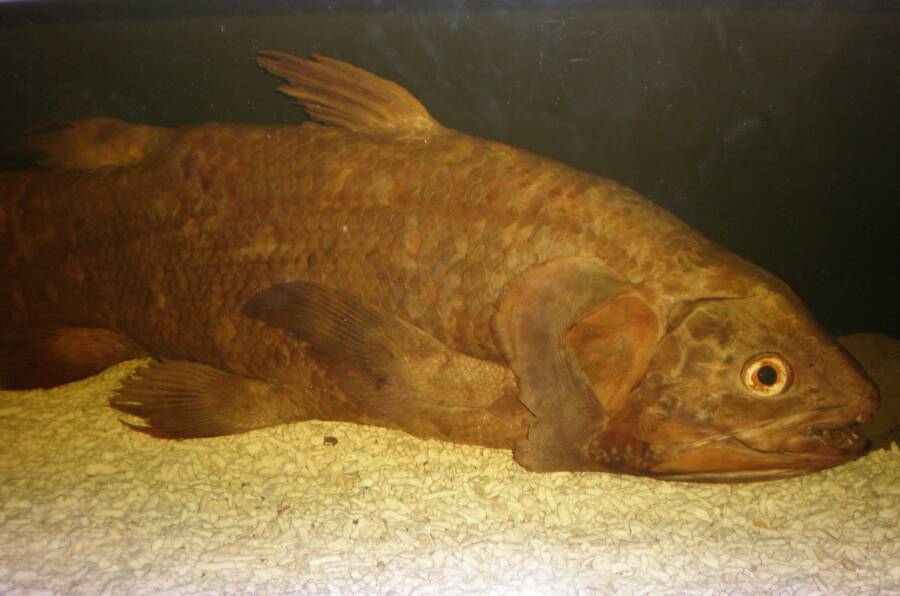 Wikimedia CommonsIt was less than a century ago that it became clear this species hadn’t gone extinct, after all.

For Marjorie Courtenay-Latimer, finding this supposedly extinct animal that existed when tyrannosaurs roamed the Earth was a triumph. She described it as the “most beautiful fish” she had ever seen.

Courtenay-Latimer was just 24 years old when she made the discovery of a lifetime. One of the less glamorous parts of her job as curator of the East London museum in South Africa was to respond to any calls from fishermen who had caught something they deemed to be unusual, then go to the docks and inspect it. 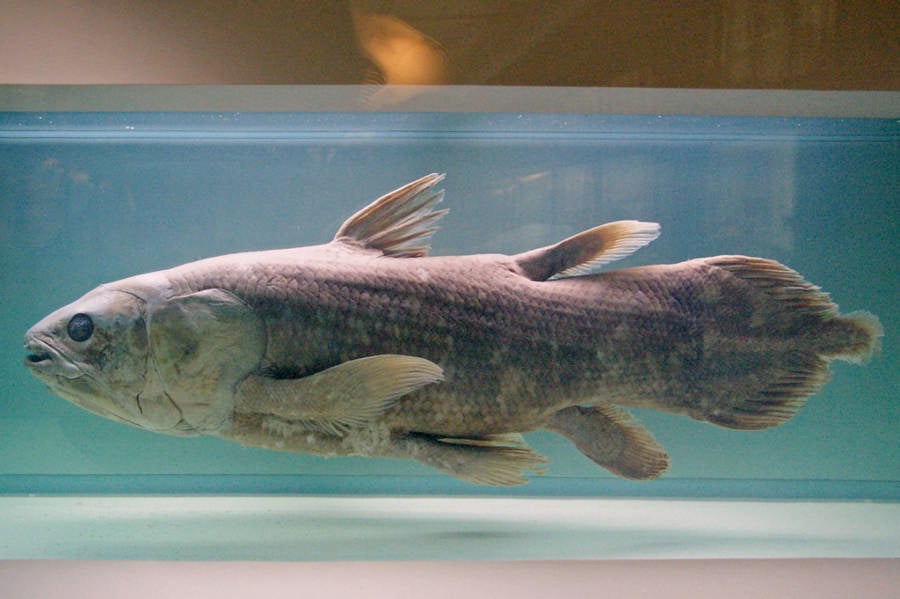 Wikimedia CommonsThe coelacanth is immediately recognizable by its immense size and unique color.

Courtenay-Latimer received one such call from Captain Hendrik Goosen on December 22, 1938, and quickly went down to go inspect it for herself. The young curator recalled how she immediately noted a fin that looked like a “beautiful china ornament” and then “picked away at the layer of slime to reveal the most beautiful fish I had ever seen.”

In addition to its “iridescent silver-blue-green sheen,” the fish possessed several other unusual features including “four limb-like fins and a strange puppy-dog tail.”

Courtenay-Latimer quickly realized that the specimen merited further study. Her first obstacle, however, was to convince a cab driver to help her take the nearly five-foot-long fish back to the museum.

Exploring the habitat of the coelacanth.

Even though she failed to find any matches for the fish in the museum’s reference books, and the museum’s chairman shrugged off her discovery as “nothing more than a rock cod,” Courtenay-Latimer remained convinced that there was something special about the fish she had found.

She decided to send off a sketch of the specimen to her friend J.L.B. Smith, a lecturer at Rhodes University as well as an amateur ichthyologist, a.k.a. fish scientist. Smith took one look at Courtenay-Latimer’s drawing and, as he later recalled, “a bomb seemed to burst in my brain.”

The mystery fish had finally been identified as none other than a coelacanth, a prehistoric creature thought to have gone extinct 60 million years ago.

The Distinctive Features Of The Ancient Coelacanth

In addition to the fact that it was thought to have been extinct for millennia, the coelacanth is unique for several other reasons. The four “limb-like fins” Courtenay-Latimer noted are actually “lobe fins” that act almost like legs for the fish and “move in an alternating pattern, like a trotting horse.”

Some scientists believe that the coelacanth is actually an important link between conventional fish and the first creatures that evolved into four-legged, land, and sea-dwelling amphibians.

The coelacanth also has a distinctive joint in its head that allows it to widen its mouth an astonishing amount to swallow its prey. Of all living animals, the coelacanth is as yet the only known creature to possess this joint.

Its thick “pale mauvy blue” scales are also unique to other extinct marine animals. These strange fish dwell at depths of up to 2,300 feet and use electricity generated from an electrosensory rostral organ in their snouts to navigate and hunt. 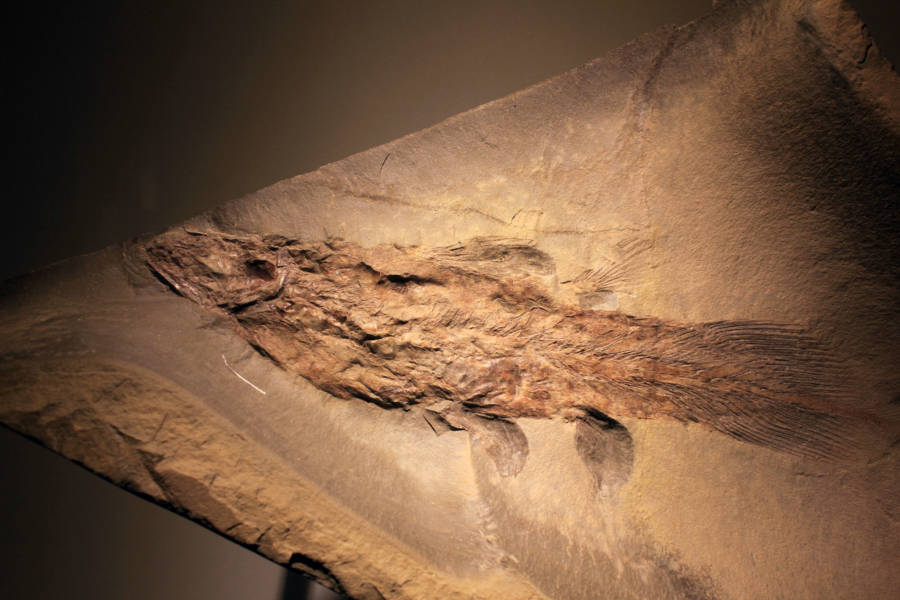 The coelacanth can grow to over six and a half feet in length and weigh up to 198 pounds. Further adding to their mystique, scientists have estimated that the fish can live to be over 60 years old.

Females are generally larger than males and though they are docile in larger groups, the coelacanth does not like physical contact. They’re nocturnal creatures, retiring to caves or deep waters during the daylight and then venturing to the lowest levels of the ocean to feed at the seafloor. 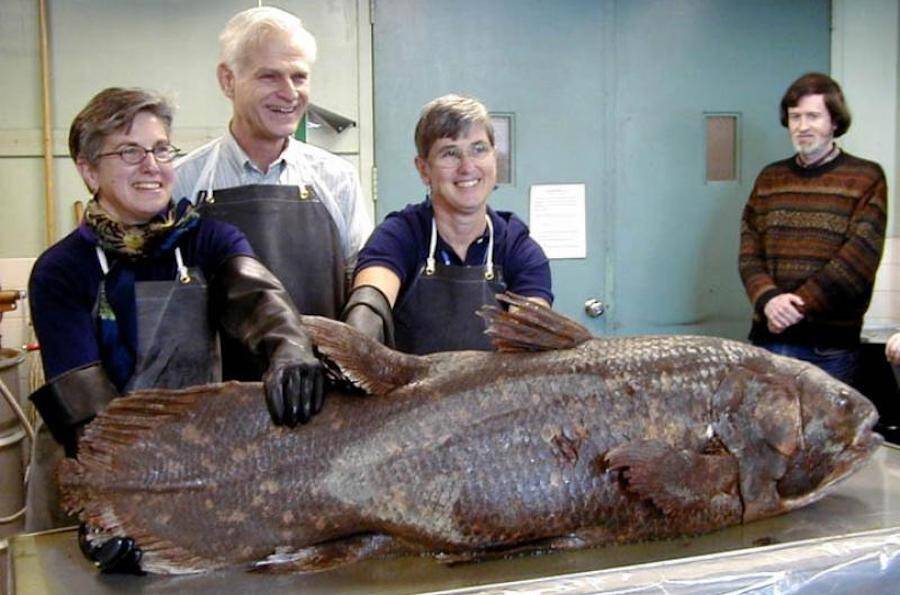 It is little wonder that after Courtenay-Latimer’s astounding 1938 discovery, the fish was often referred to as a “living fossil” and its identification was deemed “the most important event in the study of natural history in the 20th century.”

Scientists dubbed the creature Latimeria chalumnae in honor of the museum curator who had discovered it and for the river in which it had been discovered.

Due to lack of a proper cold storage facility, Courtenay-Latimer was forced to have her specimen taxidermied, a process that lost the coelacanth’s internal organs. This made further studies nearly impossible. 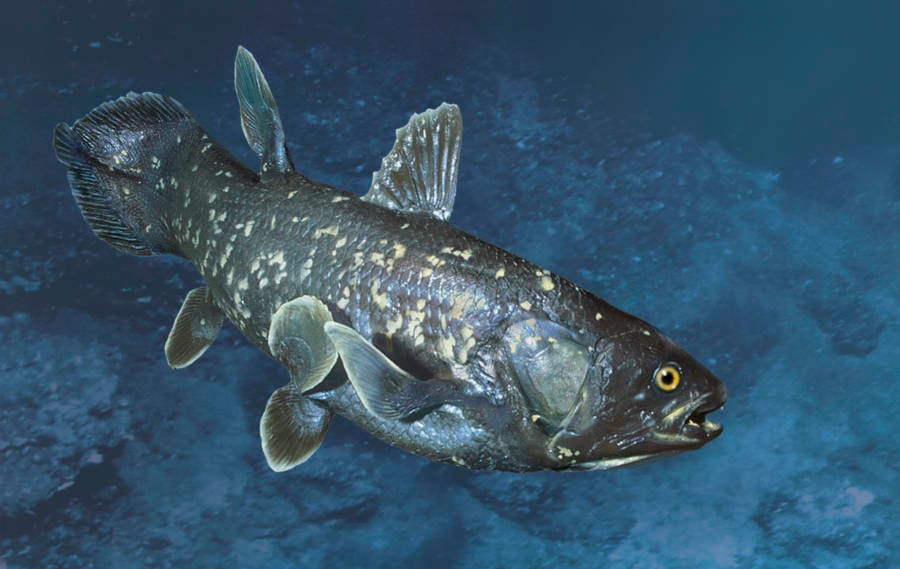 Hoberman Collection/UIG via Getty ImagesThe coelacanth is considered to be the missing link between fish and tetrapods.

It wasn’t until 1952 that another coelacanth was found in the Comoro Islands. Upon hearing the news, Courtenay-Latimer’s old colleague Dr. Smith flew immediately to the location where he “wept with joy when he found the bluish five-foot biological treasure still in good condition.”

Over the next 23 years, a further 82 coelacanth would be found, mainly by accident. The species is actually useless to fishermen since their scales “ooze mucus” and the high amounts of oil, urea, and wax in their thick scales render them inedible.

For decades, the coelacanth was caught only in the Indian Ocean, leading scientists to believe that they dwelled exclusively in that area until 1997 when ichthyologist Dr. Mark Erdmann made an unusual discovery on his honeymoon. 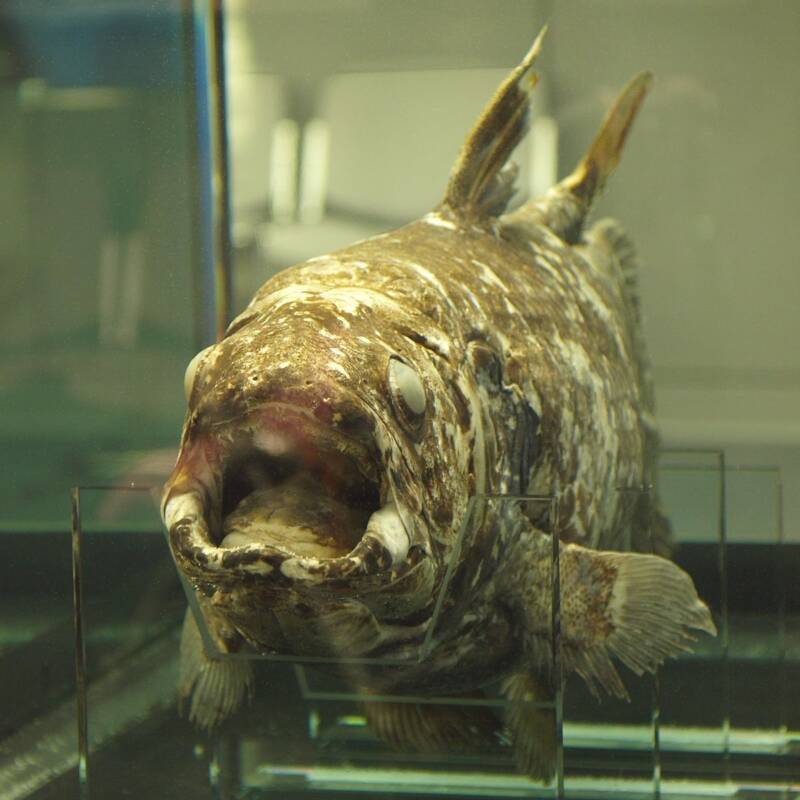 While strolling through an Indonesian fish market with his wife, Erdmann noticed a strange, enormous fish being carted around. The locals called it the raja laut, or “King of the Sea,” but Erdmann immediately recognized it as a coelacanth.

As Erdmann described, the chances of an ichthyologist stumbling upon an entirely new discovery on his vacation seemed “a bit too fortuitous to be real. I simply couldn’t believe that we were viewing something which was unknown to science.”

No coelacanth had ever been found outside of the Indian Ocean, so Erdmann passed up his chance and watched his priceless specimen be sold for a meager $12. 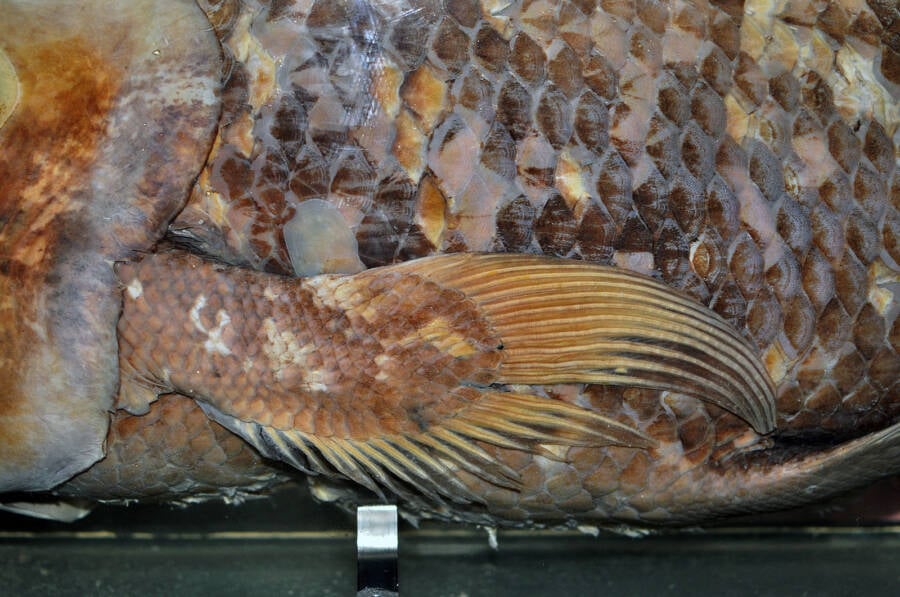 Luckily for Erdmann, an offer of a cash reward for this new Indonesian species of coelacanth bought him a second chance, and this time he was able to obtain an actual living specimen. The scientist and his wife were able to take the “first-ever photos of this species in life,” thus earning him his own place in the strange story of the coelacanth.

While the coelacanth is often referred to as a “living fossil,” this is a bit of a misnomer. The coelacanth does, in fact, evolve and adapt. Today, the coelacanth is considered critically endangered by the International Union for Conservation of Nature (or IUCN).

Their biggest risk is due to bycatch by fishermen, but because they’re bad eating, hopefully, more successful releases from accidental catch will keep the coelacanth swimming for another millennium to come.

After learning about the prehistoric coelacanth, read about the fossil of the world’s oldest known animal. Then, discover a species of tortoise scientists had also believed was extinct.