The Little-Known Story Of The Colfax Massacre, The Worst Episode Of Racial Violence During Reconstruction

After the 1872 gubernatorial election in Louisiana, KKK members and former Confederates stormed a courthouse occupied by Black militiamen — and killed as many as 150 of them. 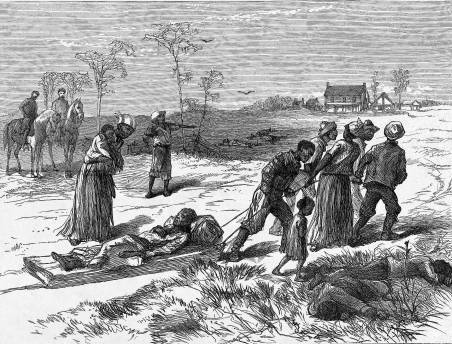 Public DomainFollowing the Colfax Massacre, Black families in the small Louisiana town buried their dead. Over 150 died in the race massacre.

In 1873, the losing side of the most recent Louisiana gubernatorial election took up arms and marched on a local seat of government. It ended in bloodshed.

The clash took place in the small town of Colfax, Louisiana. A white mob of Democrats that lost the election tried to seize control of a courthouse defended by Black Republicans. And the election dispute quickly turned into a massacre.

For decades, few outside of rural Louisiana remembered the Colfax Massacre. History textbooks brushed over the slaughter and even the marker in the town square blamed “carpetbag misrule” – code for Reconstruction-era policies that protected newly freed Black Americans – for the massacre.

What triggered the violent race massacre? And how did the Colfax Massacre help end Reconstruction and tip the balance toward segregation and Jim Crow rule?

The Louisiana Election Of 1872

An election triggered the Colfax Massacre. In 1872, Louisiana voters went to the polls to choose a new governor. But the Republican and Democratic candidates split the votes, leaving both contestants claiming victory.

Although the pro-Reconstruction Republicans had more votes, the Democrats formed a militia to seize power. President Ulysses S. Grant ordered federal troops to Louisiana to enforce order, Smithsonian reports. But before they broke up the militia, the tense situation erupted in Colfax. 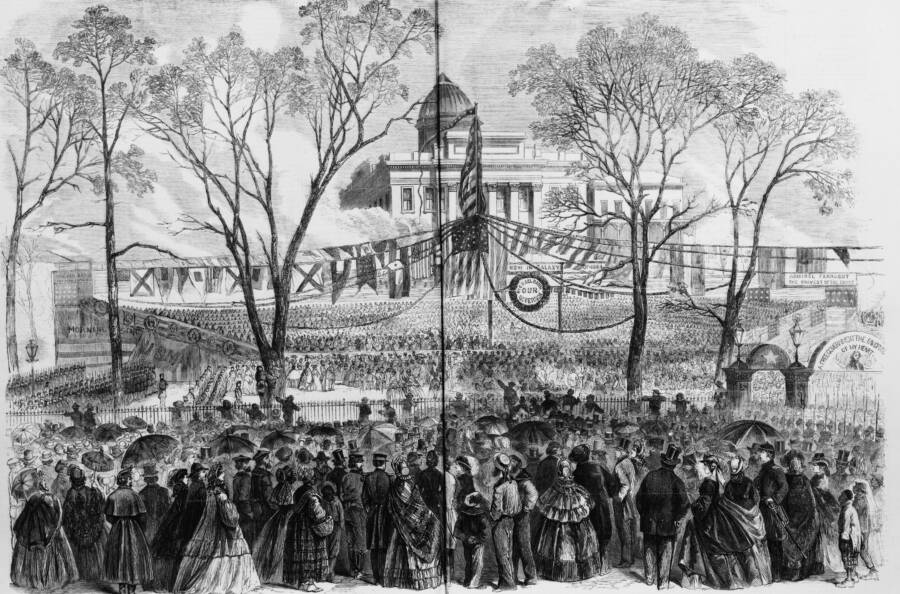 Library of CongressA post-Civil War inauguration for a Louisiana governor.

A courthouse sat at the center of the small town of Colfax, Louisiana, the seat for Grant Parish county. The parish was divided, like many in the post-Civil War South. In the 1872 election, 4,600 Colfax voters cast ballots. Around 2,400 mostly Black voters supported the Republican candidate, while 2,200 mostly white voters pulled the level for the Democrats.

At the end of March 1873, white Democratic officials called for a militia to seize the Colfax courthouse and prevent Republicans – including Black elected officials – from taking office.

In response, a group of Black men surrounded the courthouse to prevent the white militia from seizing control of government.

On April 13, the white mob fought back, firing a cannon at the courthouse.

The Worst Explosion Of Racial Violence Since The Civil War

Easter Sunday fell on April 13, 1873. And on that day, the Colfax courthouse became the site of a race massacre.

Around 60 Black men surrounded the courthouse to stop the white mob from seizing political power illegitimately. More than 300 white men marched on the courthouse.

James Hadnot led the white militia. And when one of his followers accidentally shot him, Hadnot’s militia began slaughtering their Black prisoners.

After seizing control of the courthouse, the white militia promised pardons to any Black residents who surrendered. Yet when dozens surrendered, the white mob executed them.

The massacre soon spread beyond the courthouse, with the mob killing recently freed enslaved people across Grant Parish. 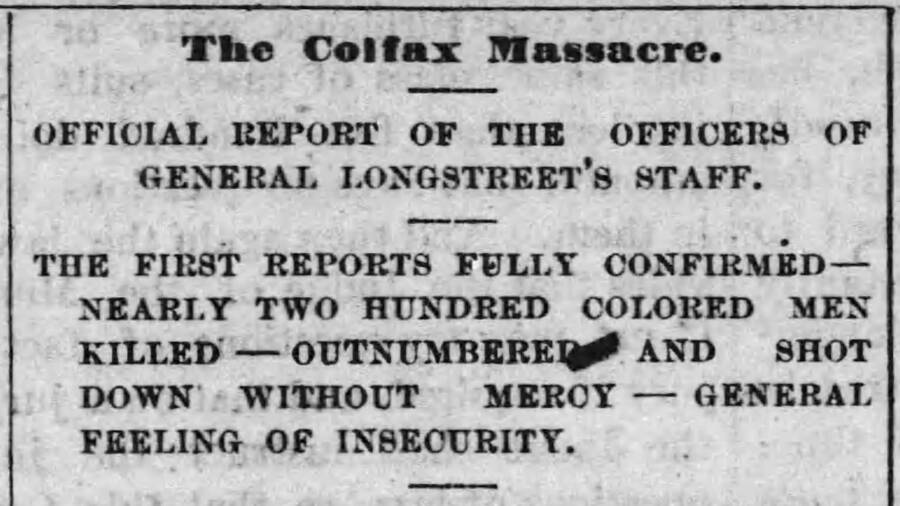 Rutland Weekly HeraldAccording to the report from Louisiana authorities who arrived in Colfax the day after the massacre, nearly 200 Black victims were “shot down without mercy.”

At the end of the day, three white men died, while around 150 Black people were slaughtered – including at least 50 after the courthouse showdown ended.

The Reaction To The Colfax Massacre

Across the country, newspapers reported on the Colfax Massacre. However, many softened the impact by calling it a riot — and many blamed the Black victims for the massacre.

One Southern paper laid the blame at the feet of the “scalawags and carpetbaggers,” common terms for southern and northern Republicans who supported Reconstruction.

“The citizens who ‘cleaned them out’ acted by virtue of law and under orders of the sheriff,” the paper proclaimed, exonerating the white mob.

State and local authorities refused to prosecute the murderers. Federal authorities, meanwhile, stepped in and arrested 97 white members of the militia.

The perpetrators were charged under the new Ku Klux Klan Acts. But only a handful of defendants faced conviction, which the Supreme Court overturned in 1876. The high court ruled that the federal government could not charge individuals with denying Constitutional rights to Black people.

The Supreme Court ruling ended the federal government’s best tool to fight hate crimes against Black Americans. In the aftermath, hate groups like the KKK had little to fear when terrorizing their Black neighbors.

The Colfax Massacre In Hindsight

In the 1950s, as states once again fought over segregation, Jim Crow, and Civil Rights, the city of Colfax erected a historic marker to remember the massacre. Yet the marker celebrated the massacre, declaring that the slaughter “marked the end of carpetbag misrule in the South.” 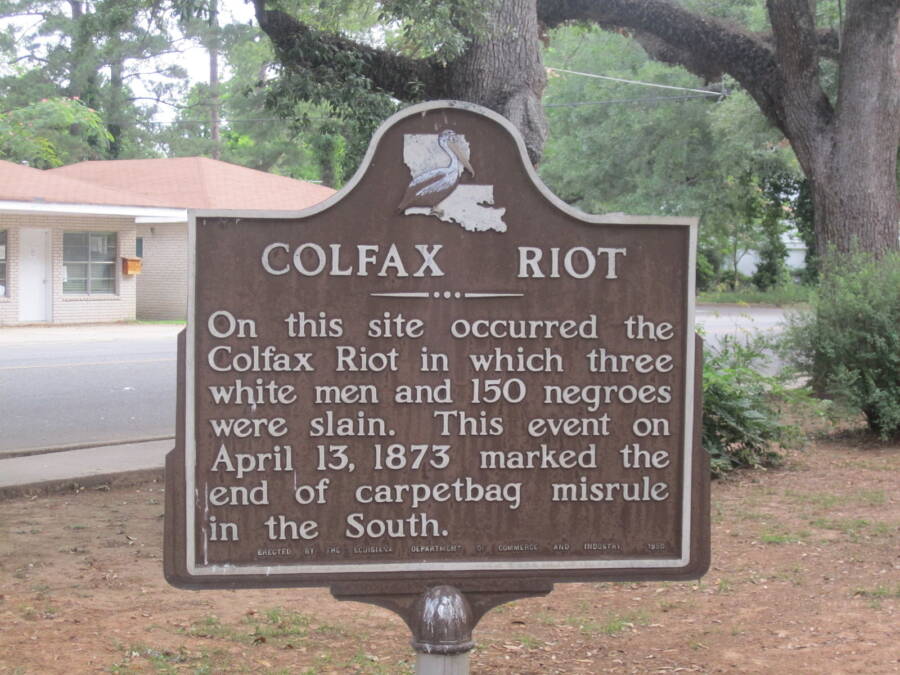 Wikimedia CommonsThe historic marker erected outside the courthouse in the 1950s credited the massacre with ending Reconstruction efforts in the South.

As the years passed, white southerners remembered the Colfax Massacre very differently than their Black neighbors.

Decades after the slaughter, eyewitness John I. McCain placed the blame squarely on “a mob of armed negroes” who “began to make open threats to the effect that they would kill all the white men and appropriate the women and girls to fiendish desires.”

A monument in the Colfax cemetery praised the three dead white men as “heroes” who “fell in the Colfax riot fighting for white supremacy.”

Even as late as the 2000s, white residents of Colfax remembered the massacre in racially loaded terms. One man told an Atlantic reporter that the Black mob tried to seize power rather than uphold the election results.

“You heard the expression ‘getting’ uppity’? Well, that’s what these people did – they got uppity, and decided they would run things, and of course they couldn’t.”

By placing the blame on the shoulders of Black Louisianans, generations of white Louisianans twisted the truth. After losing an election to a racially diverse party, white supremacists turned to violence. And in Colfax, more than 150 people lost their lives attempting to uphold a valid election.

The Colfax Massacre had wide-reaching consequences, even as the specific clash faded from the headlines. By undermining the Ku Klux Klan Acts, the Supreme Court closed the door on Reconstruction. Tragically, racial terrorism would dominate the former Confederacy for generations.

In 2021, Colfax finally removed the historic marker outside the courthouse.

After the Colfax Massacre, the Jim Crow era saw several major race massacres. Next, learn about the tragic Tulsa Race Massacre that destroyed Black Wall Street, and then read about how the Elaine Massacre destroyed a Black labor movement.