In 1919, Black sharecroppers in Arkansas tried to organize for better wages — until a white mob and U.S. troops murdered hundreds of them.

In the Jim Crow South, many Black farmers knew that white landowners were taking advantage of them. But in 1919, the Black sharecroppers of Elaine, Arkansas had had enough. So they met to unionize.

But when local white men heard that the Black sharecroppers were planning to fight for fairer wages and better working conditions, they claimed that they were actually plotting to murder all the white people in town. And what started as a labor dispute quickly escalated into a race massacre.

Though Black sharecroppers knew they would face pushback, they saw unionizing as the only way to earn a living wage. But to white landowners, simply asking for fair payment was a crime akin to murder.

In response to the unionization efforts, a white mob — which included local police, federal troops, and the KKK — slaughtered at least 200 Black men, women, and children. In the midst of the chaos, five whites died. And when the massacre ended, the courts charged dozens of Black men with murder.

The Origins Of The Elaine Massacre 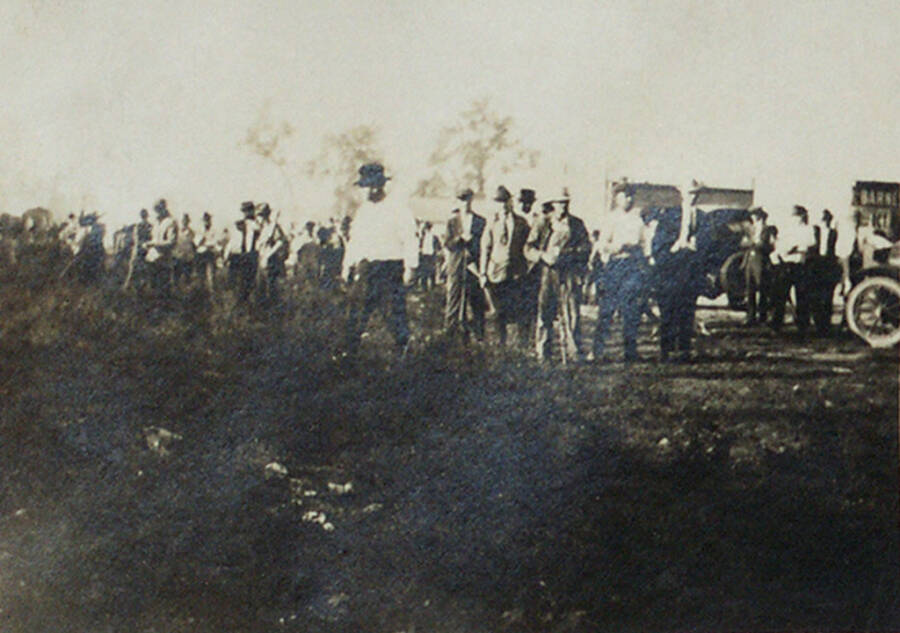 The Elaine Massacre was not the only instance of racial violence that took place in 1919. All throughout the United States, dozens of race massacres had already broken out that year. Known as the Red Summer, this brutal period actually stretched from late winter to early autumn of 1919.

In Chicago, white outrage over a Black teenager swimming at a “white” beach triggered several days of violence that killed 38 people. In Washington, D.C., white men attacked Black neighborhoods after a rumor spread that a Black man had assaulted a white woman. And in Norfolk, Virginia, a white mob targeted a parade honoring Black veterans returning from World War I.

The Elaine Massacre differed from the earlier racial violence in two major ways. First, the massacre claimed many more victims, with estimates of at least 200 deaths. And second, labor organizing triggered the violence.

By 1919, Black sharecroppers in Arkansas had begun organizing in earnest. At the time, white landowners were exploiting the farmers, seizing most of the profits and claiming that their tenants still owed them money.

“Most of these men and their families had worked for years ‘on shares’ and had come out every year in debt or just barely out,” wrote famed Black journalist and anti-lynching activist Ida B. Wells. “The price of cotton had been low, and the landlord who furnished the land and supplies saw to it that the Negro laborer remained in his clutches from year to year.”

The sharecroppers were tired of low wages and exploitation. So they called up a white attorney from Little Rock who was willing to help African American workers reach a better agreement with the landowners.

The Church Meeting That Enraged A White Mob 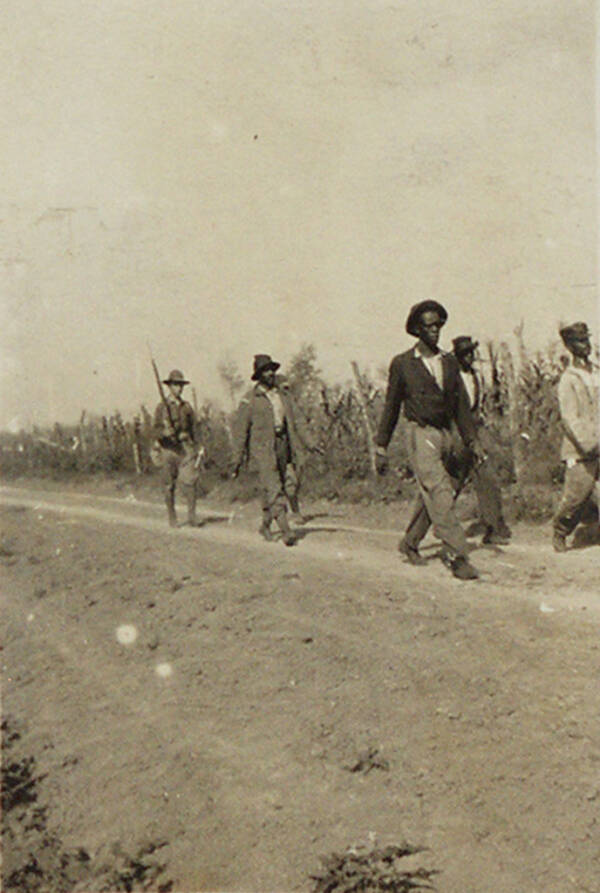 The sharecroppers met in a church on the night of September 30, 1919, to discuss possible next steps. During their talks, the farmers debated cutting out the landowners and sending their cotton straight to Boston.

Efforts to unionize represented a major threat to white landowners. And in the area around Elaine, where Black residents outnumbered whites by ten-to-one, the labor dispute sparked rumors of a Black “insurrection.”

While around 100 sharecroppers met in the church, armed white men showed up outside. Gunshots were soon fired into the church. And before long, the shots were returned. Amidst the gunfire, a white man died.

The next morning, the Phillips County sheriff sent out a posse of up to 1,000 armed white men to stop the “insurrection” in Elaine. For days, this posse — which included members of the local law enforcement as well as members of the KKK — attacked the Black residents of Elaine in a brutal rampage.

These attacks were not limited to the sharecroppers who had been attempting to organize. Instead, the mob indiscriminately attacked any Black men, women, and children who had the misfortune of being in their path.

By October 2, 1919, Arkansas Governor Charles Brough had called for 500 federal troops to “round up” the “heavily armed Negroes” in Elaine. According to the Arkansas Democrat, these soldiers were “under order to shoot to kill any Negro who refused to surrender immediately.”

After days of violence, at least 200 Black men, women, and children lay dead. Some think the death toll may have been as high as 800. But the courts only cared about the five white people who died during the massacre. 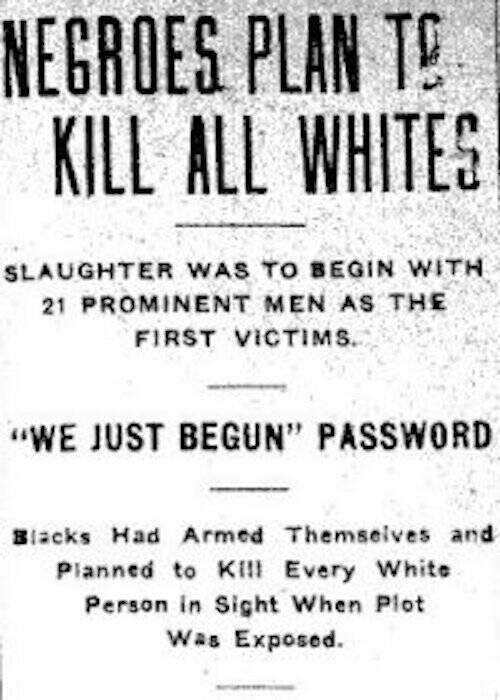 The Gazette/Wikimedia CommonsAn Arkansas newspaper headline during the Elaine Massacre blamed the violence on Black residents.

Hundreds of Black men, women, and children had lost their lives during the Elaine Massacre. And yet, the only people who were charged with crimes related to the violence were Black residents. They had been blamed for killing the five white people who died — and for planning to kill far more.

According to white planters, the sharecroppers were not meeting to demand fairer working conditions. They were, instead, plotting to slaughter whites.

One white planter explicitly told journalists that Black people were to blame for the violence: “The present trouble with the Negroes in Phillips County is not a race riot. It is a deliberately planned insurrection of the Negroes against the whites directed by an organization known as the ‘Progressive Farmers and Household Union of America,’ established for the purpose of banding Negroes together for the killing of white people.”

Meanwhile, Governor Charles Brough accepted the narrative put forth by local white leadership. “The situation at Elaine has been well handled and is absolutely under control,” he said. “The white citizens of the county deserve unstinting praise for their actions in preventing mob violence.”

Shortly after the massacre, the trials began.

In late October 1919, the Phillips County grand jury charged 122 Black people with crimes related to the massacre. Dozens faced murder charges. Just a week later, the first 12 defendants went to trial. The defense attorneys did not interview witnesses. They did not challenge the all-white jury. And the trials used testimonies that had been obtained through torture.

The rushed trial then convicted the 12 Black men and sentenced them all to death in the electric chair. With the courts out for blood, 65 other Black people who were charged with murder took plea bargains to save their lives.

The “Elaine Twelve” received the death penalty. But the NAACP stepped in — and fought tirelessly to overturn their convictions.

Why The Supreme Court Broke Precedent In This Historic Case 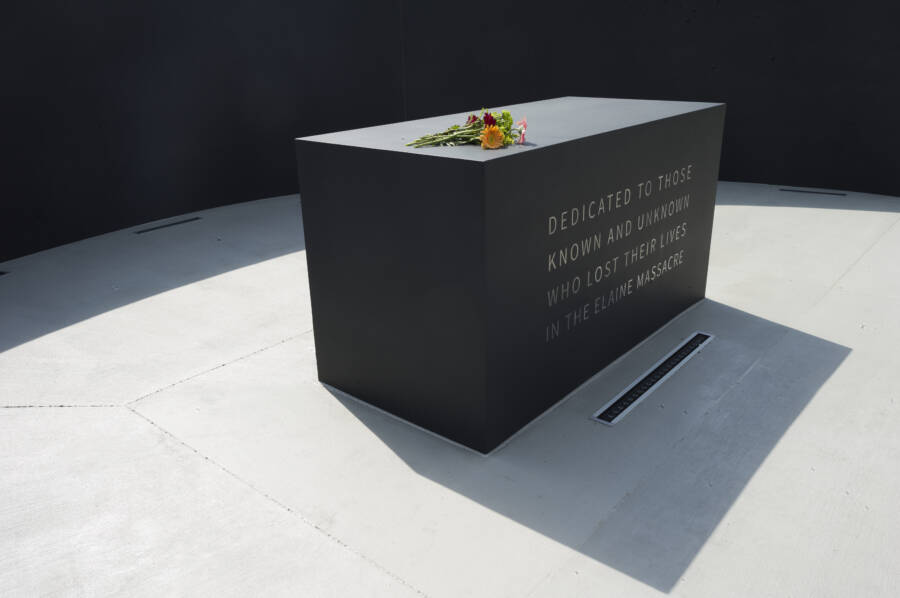 Andrew Lichtenstein/Corbis via Getty ImagesA memorial for the victims of the Elaine Massacre, which was dedicated in 2019 in Helena, Arkansas.

For the next three years, NAACP lawyers fought to free the Black men who were wrongly accused of causing the Elaine Massacre. It was an uphill battle. But by 1923, the case had finally reached the Supreme Court.

In the case of Moore vs. Dempsey, the court ruled in favor of the wrongly convicted Black men. The rushed trials, all-white jury, and confessions induced by torture violated the men’s 14th Amendment right to due process.

Justice Oliver Wendell Holmes declared that their trials could not have been constitutional “if the case is that the whole proceeding is a mask — that counsel, jury, and judge were swept to the fatal end by an irresistible wave of public passion.” The ruling broke with court precedent in that the justices were no longer ignoring racial injustices that happened in towns like Elaine.

In 1925, the Arkansas State Penitentiary finally released the last of the wrongly convicted Black men.

But the court’s judgment did not end the conflict over what happened in Elaine, Arkansas in 1919. For years, white planters still claimed that the mob violence had prevented a massacre of white residents. Even today, some deny that the Elaine Massacre was a targeted slaughter of Black people.

For the 100-year anniversary of the massacre, the community of Elaine planted a memorial tree. A few months later, someone chopped it down.

After learning about the Elaine Massacre, read about the Tulsa race riots. Then, discover the untold history of the Rosewood Massacre.