How The Rosewood Massacre Wiped Out An Entire Black Town

Following reports that a Black drifter assaulted a white woman, a racist mob razed the town of Rosewood, Florida in 1923 and killed as many as 150 people. 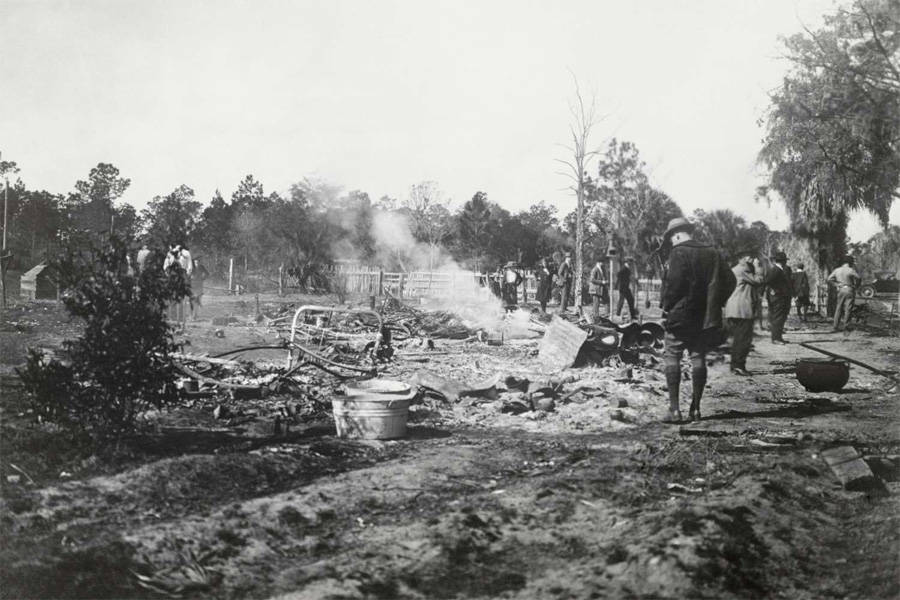 In the early 1920s, the town of Rosewood, Florida was a small but thriving Black community. But in 1923, a white mob destroyed the entire town — all because a white woman claimed that a Black man assaulted her. This racially motivated attack is now known as the Rosewood Massacre.

Over the course of seven days, the mob burned buildings, shot at residents, and even gang-raped a woman. At least six Black people and two whites died during the Rosewood Massacre. But even though the official death toll remains at eight, some estimates claim that as many as 200 people died. The surviving residents were driven out of the town — never to return.

Despite how horrifying the massacre was, the story faded away almost immediately after the violence ceased. And it remained largely hidden until 1982 — when a journalist for the St. Petersburg Times published an exposé.

By the point the story received national attention, many living survivors were in their 80s and 90s. But that didn’t stop them from speaking out about their experiences — and demanding restitution from the state of Florida.

This is the true story of the Rosewood Massacre — and how the survivors successfully fought for one of the most significant reparations programs in American history.

Why Did The Rosewood Massacre Happen? 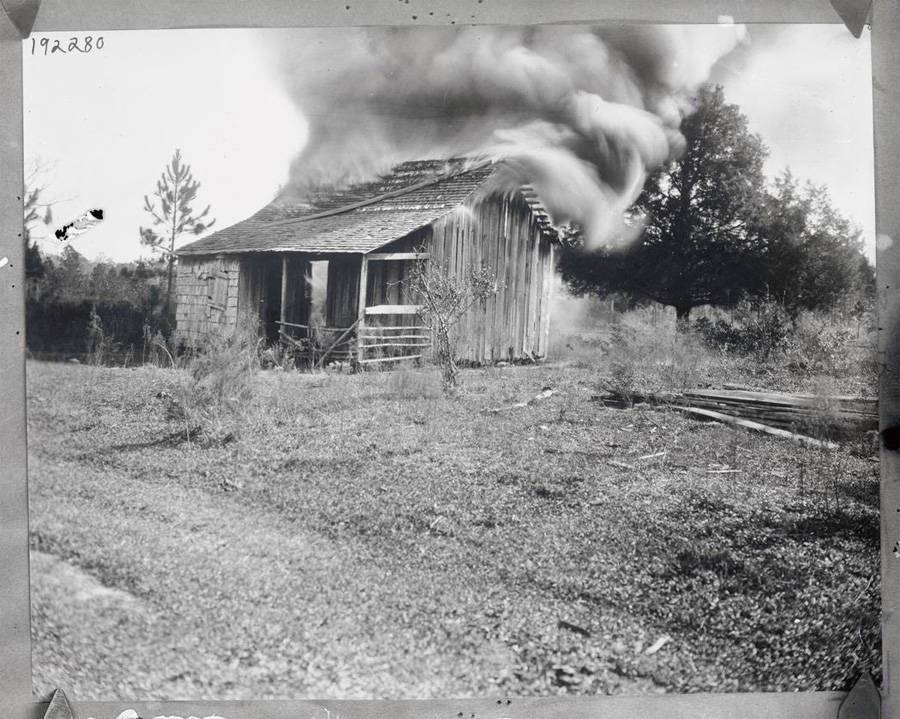 The Rosewood Massacre took place during the Jim Crow era, when racial violence was widespread in the United States.

According to the National Association for the Advancement of Colored People (NAACP), 4,743 lynchings were recorded in America from 1882 to 1968. Of the total known lynchings, 72 percent were against Black victims. These numbers do not account for the countless lynchings that went unreported.

Florida, of course, was not immune to these violent murders. Around the time of the Rosewood Massacre, the state had an exceptionally high number of lynchings. And many of the victims were Black men.

“This was a period of time when racism was very strong in the United States, very out in the open,” said historian R. Thomas Dye in an interview with The Washington Post.

“For a Black man even to say something to a white woman, that was an excuse to be lynched… And it didn’t just happen in Rosewood. Florida had the highest per capita lynching in the United States.”

It’s no surprise that white supremacy was common in Florida — and many other states — at the time. Groups like the KKK held rallies that counted hundreds of members. And they often used any excuse they could find to terrorize Black people. Sometimes, they didn’t even bother with excuses.

Tragically, the time was ripe for an incident like the Rosewood Massacre — especially since Rosewood was such a prosperous Black town. And all it took was a white woman’s lie.

What Happened Once The Mob Descended On The Town 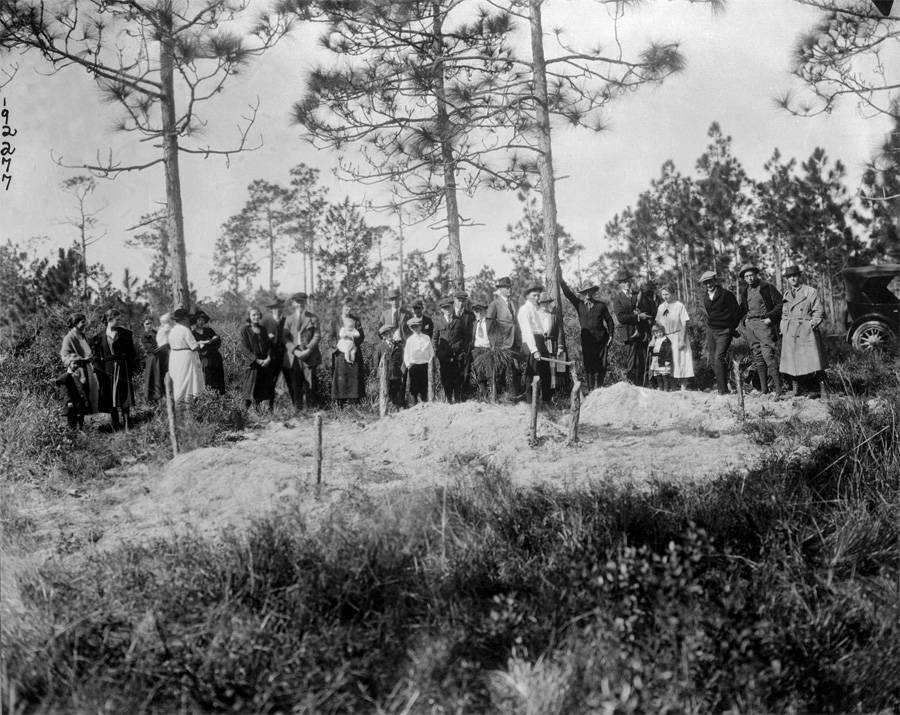 Getty ImagesVictims of the massacre being buried in Rosewood, Florida. January 9, 1923.

On the morning of January 1, 1923, a 22-year-old woman named Fannie Coleman Taylor was heard screaming in her home in Sumner, Florida. A neighbor heard the scream — and later found Taylor covered in bruises.

Taylor claimed that a Black man had entered her house and assaulted her. She later reported the same allegation to Sheriff Robert Elias Walker — and specified that she had not been raped.

Meanwhile, some Black people who worked in Sumner said the real story was that Taylor had been beaten by her (white) lover and simply used the story of a Black man hitting her to hide her affair from her husband.

But her husband, James Taylor, was still determined to seek revenge — on the man who allegedly assaulted her. So he pulled together a mob to find the assailant. Not only did he gather white people in Sumner, he also requested help from neighboring counties. And he called upon hundreds of KKK members — who were holding a rally in nearby Gainesville.

The Real Rosewood Foundation reported that Taylor’s dispatch “provoked four to five hundred Klansman to head to Sumner” to assist him on his mission. “They packed their gear and headed to Rosewood with a vengeance to participate in destroying the town at any cost. The posse arrived enraged, rabid, and ravenous for blood.”

At first, the mob prowled the local woods, looking for any Black man they could find. But then, law enforcement announced that a Black prisoner named Jesse Hunter had just escaped from a chain gang. So they set their sights on finding him.

When the mob descended on Rosewood, Hunter was nowhere to be found. But the mob members quickly became convinced that the Black residents were hiding him — and so the massacre began.

“I blame the deputy sheriff,” said Rosewood survivor Robie Mortin in 1999. “Because that lady never dropped a name as to who did what to her. Just said a negro, Black man. But when the sheriff came along with his posse and everything, he put a name to the person: Jesse Hunter.”

“They didn’t find Jesse Hunter, but noticed that here’s a bunch of n*ggers living better than us white folks. That disturbed these people.”

The Horror Of The Rosewood Massacre 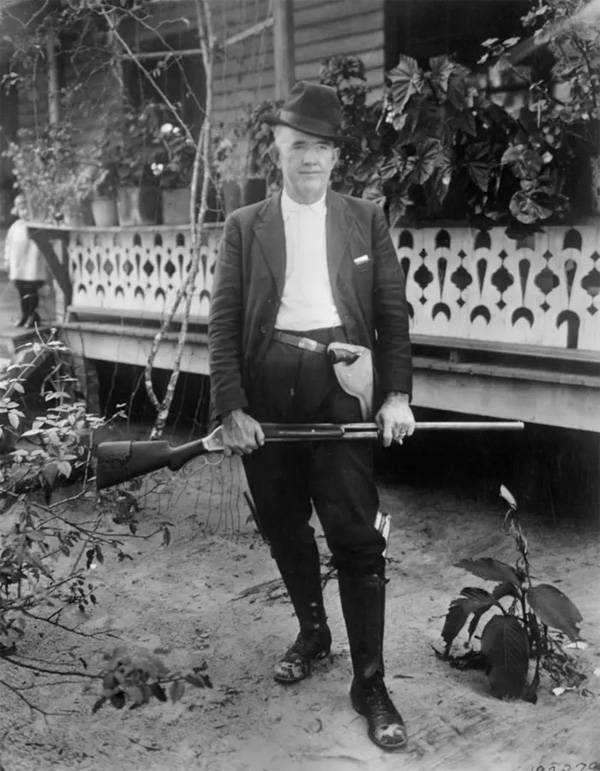 Getty ImagesSheriff Robert Elias Walker holds up a gun that was used during the Rosewood Massacre. January 9, 1923.

No one knows for sure how many people died in the Rosewood Massacre. The documented deaths included six Black people and two white people, but survivors say the death toll was likely far higher. Either way, the stories of murder, rape, and other forms of violence were highly disturbing.

At the time, the Tallahassee Democrat reported: “During the night when the attackers ran out of ammunition, and several had left to replenish the supply, the negroes, leaving the bodies of two women and one man in the house, escaped. The bloodstains indicated that several had been wounded.”

“Immediately after, the mob began firing the buildings in the village. When the village was in flames, it was said that members of the mob fired upon negroes who were fleeing from their homes.”

In some cases, the mob taunted their victims just before murdering them.

After members of the mob killed James Carrier’s brother and mother, they told him to start digging his own grave right nearby. When he couldn’t dig because of the stroke that had left his arm paralyzed, the mob shot him and left his body to rot next to the fresh graves of his family.

And when the mob captured one Black woman and tried to get her to confess that her husband was the assailant, they interrogated her until she got fed up — so they gang-raped her.

Meanwhile, the mob continued burning churches, homes, and other buildings in Rosewood, unleashing terror on anyone who ran out or was spotted hiding in the woods.

Even after the mob began to disperse, many groups returned to the town at the end of the week to burn what little was left of it. The one exception was the home of John Wright, a white merchant who owned a store nearby.

Fearing a return of the mob, the surviving Black residents fled Rosewood — leaving behind the ruins of what had once been their home.

“A foul and lasting blot has been placed on the people of Levy County, in which Rosewood is situated,” the Tampa Times reported.

In February 1923, a grand jury investigated the Rosewood Massacre. But after hearing the testimony of nearly 30 witnesses — mostly white — the grand jury claimed they didn’t have enough evidence for prosecution. For decades, it seemed like the survivors would never get justice.

That is, until 1982. Gary Moore, a journalist for the St. Petersburg Times, resurrected the story by conducting interviews with survivors — who were ready to speak out. Moore went on to publish a series of articles about the massacre, which soon garnered attention all across America.

How Rosewood Survivors Fought For Reparations 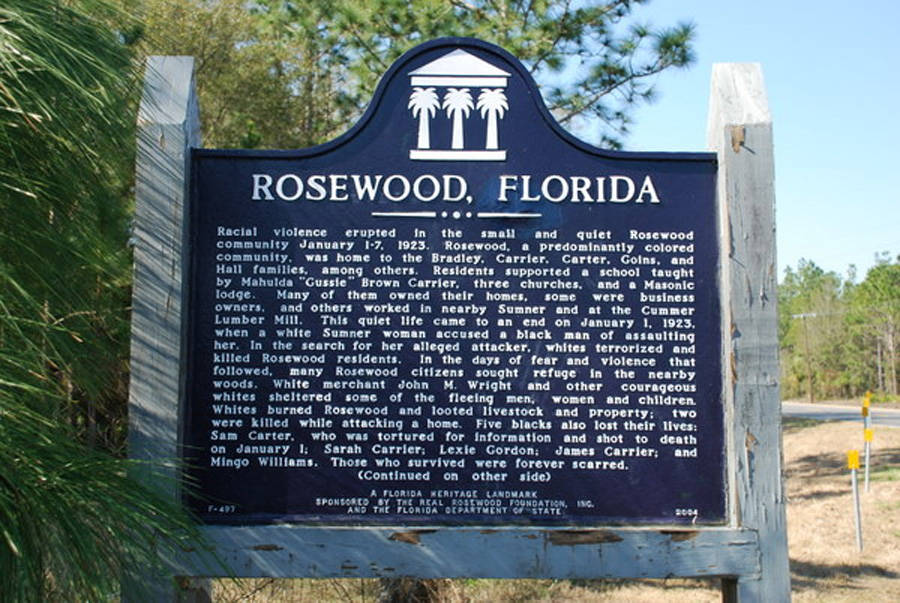 Black survivors of Rosewood and their descendants joined together in 1993 to ask the Florida legislature to “acknowledge that the atrocity occurred; to admit that the state failed to protect the Black residents; and finally, to pay.”

“We want restitution for the mayhem, the murder and eradication of our families,” said Arnett Doctor, whose mother, Philomena Goins, survived the massacre by hiding out in the woods and then jumping aboard a train that was sent to save the remaining Black residents.

The Florida legislature investigated the claims in a 1993 report. Amazingly, Florida then became one of the only states to create a reparations program for survivors of racial violence.

As The Guardian reported, “By April 1994, the House passed a bill to compensate victims of the attack with a 71-40 vote. Four days later, on April 9, 1994, the Senate passed a matching bill with a vote of 26-14, to cries of ‘Praise the Lord!’ from those Rosewood descendants present.”

The law would eventually compensate the victims $150,000 each, providing over $2 million total for the survivors. It also created a scholarship fund.

The official trailer for the 1997 movie Rosewood.

A few years later, the Rosewood Massacre was depicted on the silver screen in the 1997 movie Rosewood. Director John Singleton promoted the film as a dramatization and did not claim that it was historically accurate.

One controversial decision he made was introducing characters who were not based on real people — including a pistol-toting outsider who inspires Rosewood residents to fight back against their attackers.

“Specifics are for scholars,” Singleton said, defending his use of dramatic license. “I made a movie, not a documentary. I want to make a movie that everybody’s going to go see. The bottom line to me is that this is a story that was suppressed for years, and now it’s out there in the mainstream.”

While the town of Rosewood itself was never restored to its former glory, there is a Florida heritage landmark that stands in its place. A memorial of the horrific racial violence that happened there, this landmark represents an acknowledgement of the past — and the hope for a better future.

After reading about the Rosewood Massacre, learn the heartbreaking story behind the Tulsa race riots. Then, take a look at the ugly history of the anti-civil rights movement during the Jim Crow era.