The nearly 10-foot stone statue was discovered near Ak-Bulun village in the Issyk-Kul region of Kyrgyzstan. 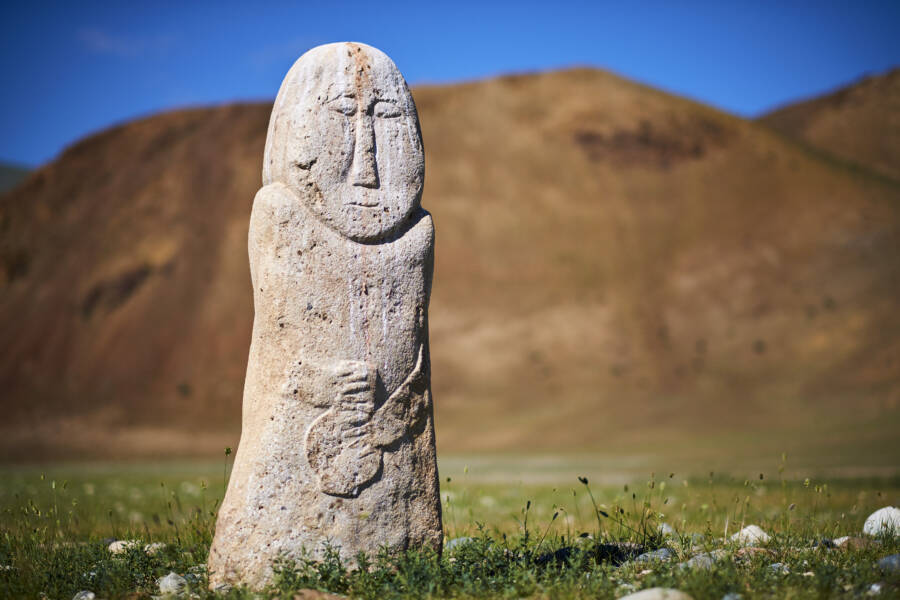 On Oct. 15, 2022, potato farmer Erkin Turbaev was working his field near the Northern Tian Shan mountains in Eastern Kyrgyzstan when he came upon what he believed to be a large rock that broke his plow. Intending to remove the burdensome object, he began digging — but what he found was no simple rock.

As Ancient Origins reports, he instead found a large stone statue depicting the face and torso of a human being.

Revealing more of the object, Turbaev realized he was looking at an atypically large version of a balbal — a type of carved stone statue used by first-millennium inhabitants of Central Asia to memorialize the dead. The statues were most common among nomadic Turks who, at the time, controlled the land that is modern-day Kyrgyzstan.

Turbaev described the statue as “a great historical find for this village” that “will bring good fortune,” Arkeonews reports.

The statue depicts a warrior wearing a helmet and armor, with one hand at its side holding a short sword and the other folded across the warrior’s chest.

Historian Zhanbolot Abdykerimov later examined the statue closely, discerning that this particular balbal featured special markings including specific inscriptions on the head, a pendant around its neck, and the hand folded across its chest — indicating that the memorialized individual held some important title.

However, without further archaeological study, it is difficult to tell which exact period the balbal belonged to, Abdykerimov noted. 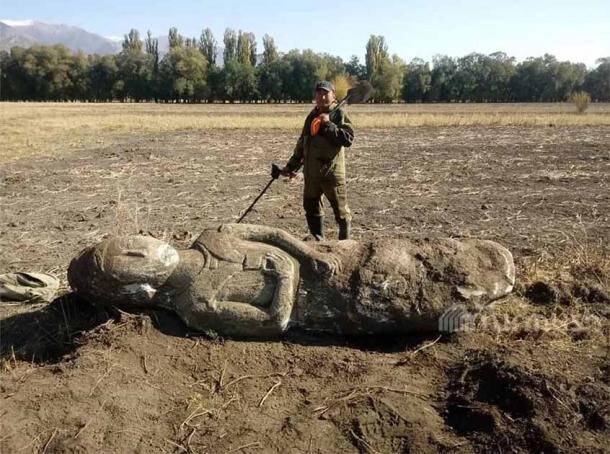 The newly discovered balbal is far from the first to be discovered in the region, however. In fact, several similar statues have been found at other sites along the lake shore of Issyk-Kul, offering some indication that the practice was widespread in the region.

“There are historical kurgans (burials) that date back to the third century BCE between the settlements of Ak-Bulun and Frunze,” Abdykerimov said, which offers historians some evidence that “the ancient city of Sarybulun … was in the eastern part of Issyk-Kul.”

Strangely, Ancient Origins notes, nomadic peoples are rarely ever associated with stone monuments as they did not remain in one particular location for a long enough period of time to leave behind permanent markers. Yet, sometime around the sixth and seventh centuries, nomadic Turks adopted the nonconformist burial practice.

There are several theories as to why the Turks began erecting stone monuments like balbals. One theory suggests that the statues were carved in the likeness of fallen warriors as a means of honoring the dead.

Another theory, however, claims that the balbal-laden gravesites actually featured numerous stone carvings of the dead enemies of heroic warriors, put in place next to the fallen heroes to serve them in the afterlife.

In either case, most historians agree that balbals depict warriors whose feats were highly worthy of commemorating, whether they were fighting on the side of the Turks or against them.

After reading about this serendipitous discovery, read about the olive farmer in Gaza who uncovered a Byzantine-era mosaic. Then, check out the earliest evidence of opium use, found in a Bronze Age burial site.