In July 2019, rangers in Colorado spotted a bull elk with a car tire stuck around its neck. After two long years of trying to relocate it, wildlife officials finally managed to liberate it. 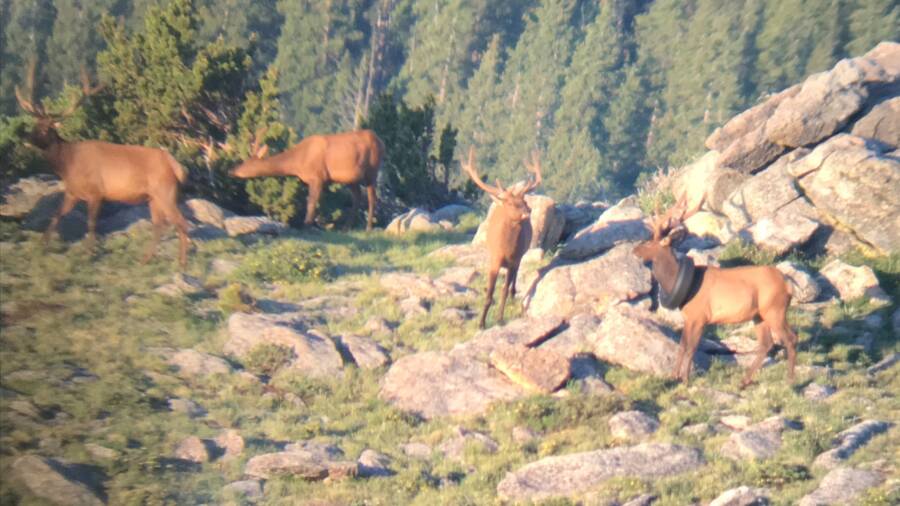 During a survey of the Mount Evans Wilderness in July 2019, Colorado Parks & Wildlife officers spotted a young bull elk that needed help. The young animal, aged at around two-years-old at the time, had a car tire stuck around its neck, likely picked up from an area litterbug.

Colorado Parks and Wildlife (CPW) officers attempted to catch the elk on four different occasions between May and June of 2021. Ultimately, officials never had a clean enough shot to tranquilize the bull elk until Oct. 9, 2021.

That Saturday yielded a local sighting of the animal on private property about one mile south of Pine Junction. While CPW officers Dawson Swanson and Scott Murdoch had to remove the antlers to take off the tire, the animal was let loose in good condition — and 35 pounds lighter.

“The tire was full of wet pine needles and dirt,” said Murdoch. “So the pine needles, dirt and other debris basically filled the entire bottom half of the tire. There was probably 10 pounds of debris in the tire.” 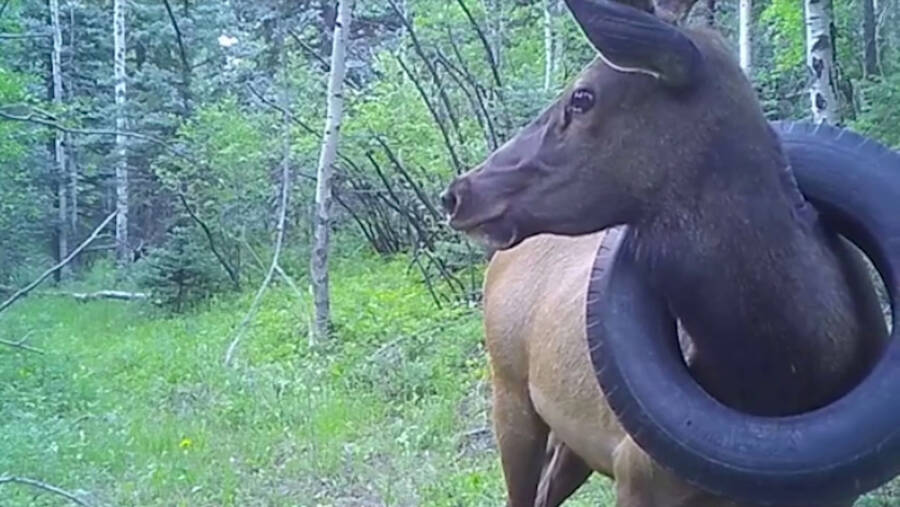 Colorado Parks and WildlifeThe elk had been spotted on camera traps three times in 2020 and four times last week before it was caught.

Patrick Hemstreet of Pine, Colorado was leisurely checking his emails on Saturday night. That’s when his wife told him to look outside at the herd of 40 elk walking past. He quickly spotted the one in question, as he’d seen it before and was aware of attempts to capture it. Fortunately, he rapidly called CPW.

“In the winter we weren’t getting any reports of him,” said Murdoch. “In the springtime, we would get an occasional report or see him in a little bachelor herd. The rut definitely made him more visible. There was a bigger bull in the group he was with on Saturday, but he is getting to be a decent size bull.”

The elk’s situation had only become more dire as time went on and its antlers matured and branched out. In that sense, the tire was getting harder to remove with every passing day. Fortunately, Swanson and Dawson rapidly responded to the report and managed to tranquilize the 600-pounder at close range — and got to work.

Unfortunately, Murdoch’s saw blade unexpectedly broke at that precise moment. This forced the officers to sheer off the elk’s antlers rather than cut through the tire. According to CPW, they operated at 8 p.m. with nothing but a flashlight. They only realized the tire had been filled to the brim after finally taking it off. 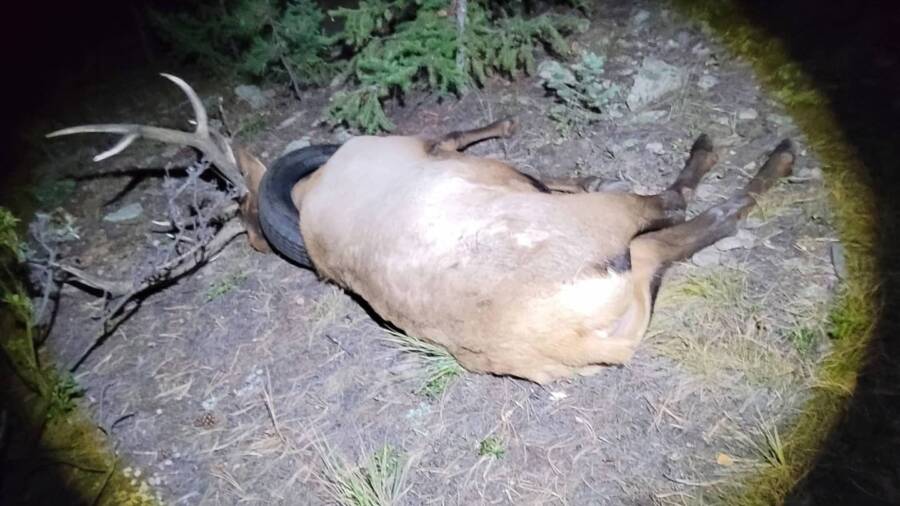 Colorado Parks and WildlifeThe elk was shot with a tranquilizer dart before it had its antlers sheered off and a reversal shot was administered.

“It was tight removing it,” said Murdoch. “It was not easy for sure, we had to move it just right to get it off because we weren’t able to cut the steel in the bead of the tire. Fortunately, the bull’s neck still had a little room to move.”

While Swanson and Murdoch were overjoyed to strip the elk of its proverbial albatross, the animal paid a hefty price. Elk (Cervus canadensis) rely on their antlers during rutting, an activity in which male elk lock antlers with each other to establish dominance and settle their mating rights with females.

“We would have preferred to cut the tire and leave the antlers for his rutting activity, but the situation was dynamic and we had to just get the tire off in any way possible,” explained Murdoch.

It’s still unclear how the elk found itself in this predicament, though an accident while snooping around abandoned tires is most likely. While the newly-liberated elk probably won’t find a mate this year, males do annually grow a new set of antlers. Perhaps most fortuitous of all, the elk had barely suffered any other injuries. 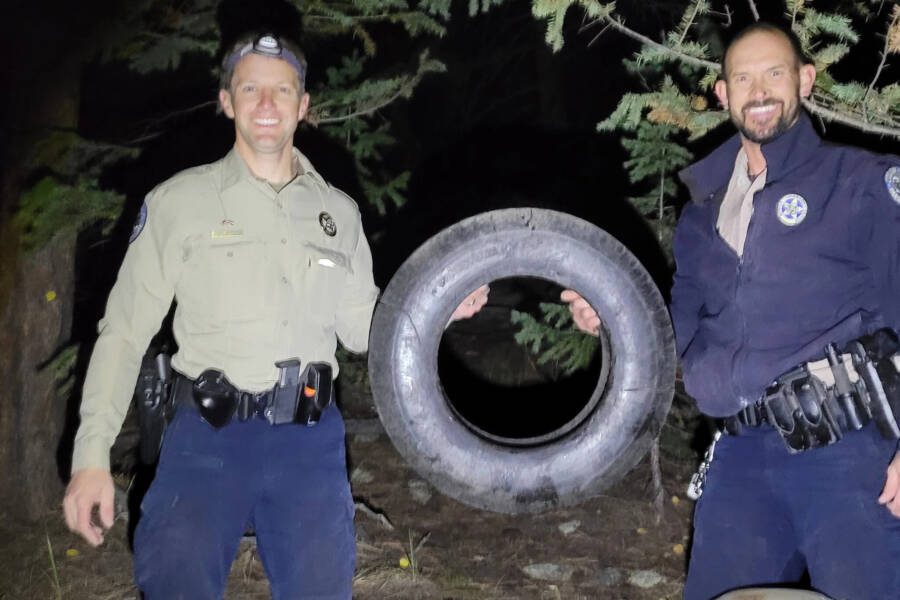 For two years, wildlife officials had been plagued by uncertainty about the damage the tire was doing. It was a good sign that local trail cameras capturing the elk during this time showed it bounding across the woods with its peers, however. When Swanson and Dawson finally removed the tire, they found the damage to be much less than they expected.

“The hair was rubbed off a little bit, and there was one small open wound maybe the size of a nicker or quarter, but other than that it looked really good,” said Murdoch. “I was actually quite shocked to see how good it looked.”

After administering a reversal to the tranquilizer, the officers watched the elk dart up and bounce away into the woods. While it was a huge success for the CPW and locals hoping for a happy ending, countless other deer, moose, and bears in Colorado continue to get caught in carelessly discarded objects like swing sets, hammocks, and nets.

There’s certainly much work left to be done regarding man-made garbage and irresponsibly abandoned trash. For now, however, one can rest assured that this particular elk has finally been freed from its annoying predicament.

After reading about the elk who was freed from the car tire around its neck, learn about the mummified dog that’s been stuck in a tree for over 50 years. Then, read about federally protected black vultures eating cows alive.