The Tragic Story Of Princess Ka’iulani, The Last Royal Of The Kingdom Of Hawaii

Before dying at just 23, Princess Victoria Ka’iulani was the last heir to the Hawaiian crown — and one of its last hopes in keeping the monarchy alive in the face of American imperialism. 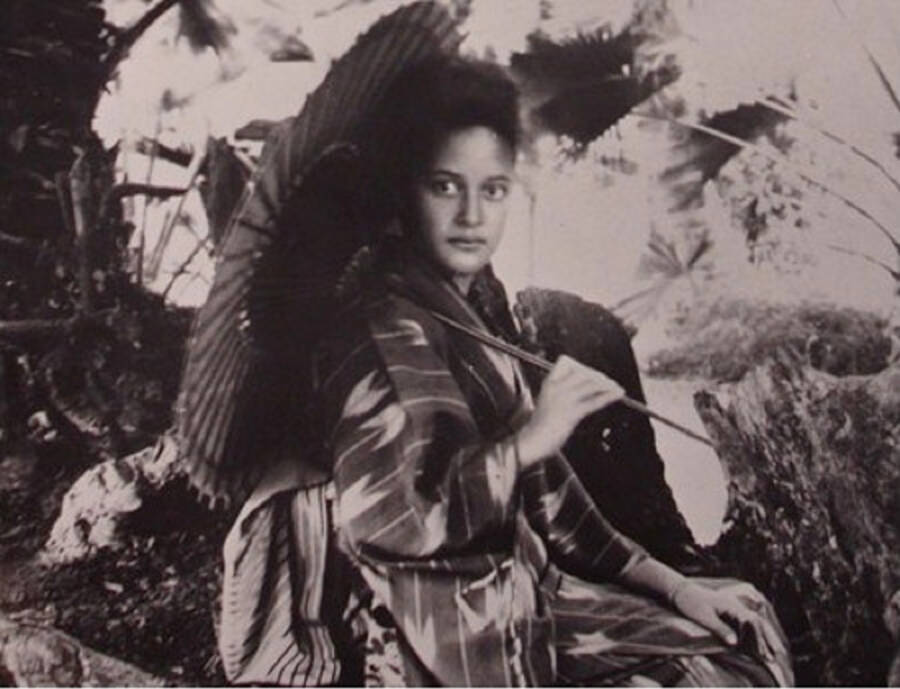 Wikimedia CommonsPrincess Ka’iulani was the final heir to the throne of Hawaii before American sugar barons toppled the monarchy and annexed the country to the United States.

To her Scottish father, the kingdom of Hawaii’s last heir apparent was known as Victoria, but to her people, she was “Ka’iulani, the Highest Point of Heaven.” Born when her homeland was being transformed by rebellious American sugar barons, Princess Ka’iulani’s short life reflected the apex of her Pacific kingdom before it fell in 1893.

Over the century which followed her death at age 23, Princess Ka’iulani has been remembered for selflessly advocating on behalf of Hawaii in the face of impossible odds. This is the story of Princess Victoria Ka’iulani, the last would-be queen of Hawaii.

Princess Ka’iulani Is Born At The Kingdom’s Peak

By the time the Hawaiian Princess Ka’iulani was born in 1875, Hawaii was a vastly different country from what it had been a century before. In a brilliant series of battles, her ancestor Kamehameha I had led thousands of troops to victory over a collection of petty kingdoms to form a united Hawaiian Kingdom. 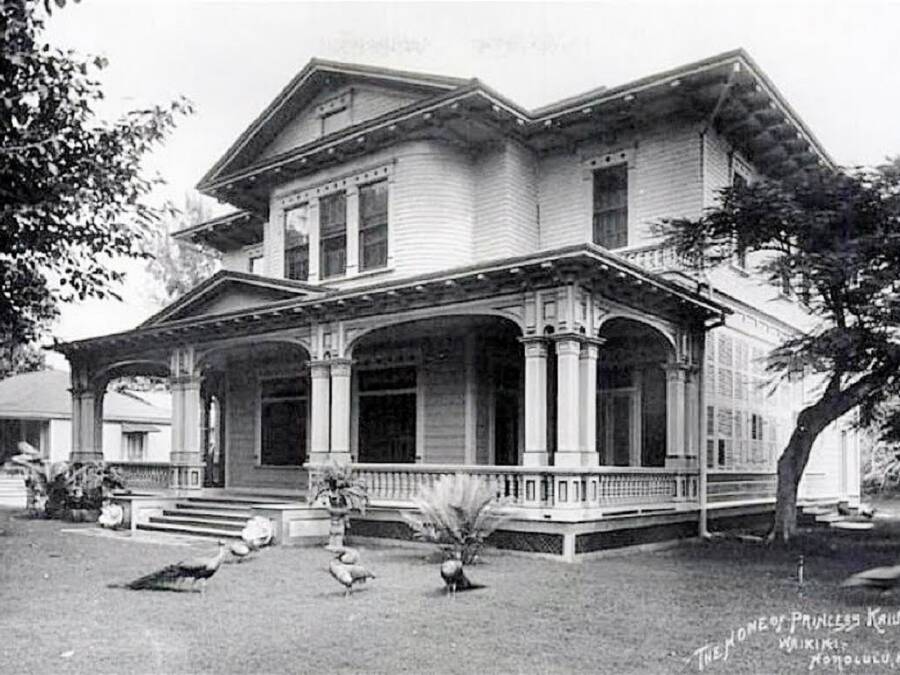 Hawaiian Princess Ka’iulani’s house, known as ʻĀinahau, was typical of the grand homes that the kingdom’s elite built for themselves in the era of Westernization.

The following decades saw a social, political, and economic revolution, with Christianity becoming the islands’ dominant religion, dozens of diplomats arriving from nations across the world, and vast sugar plantations becoming the country’s economic engine.

Thus, when Ka’iulani’s father, Archibald Scott Cleghorn, arrived in Honolulu in 1851, the capital looked much like any city in his native Scotland, with kerosene street lamps in wealthier districts, well-dressed Hawaiian gentlemen and ladies attending socials and churches, and countless masts of whaling and trading ships bobbing in Pearl Harbor.

Cleghorn built a small mercantile empire and fully embedded himself in Hawaiian society, taking citizenship in 1870 and marrying Princess Likelike that same year. Four years later, he supported her brother Kalākaua’s claim to the throne, so that by the time of her birth, Ka’iulani was already heir apparent to the House of Kalākaua. 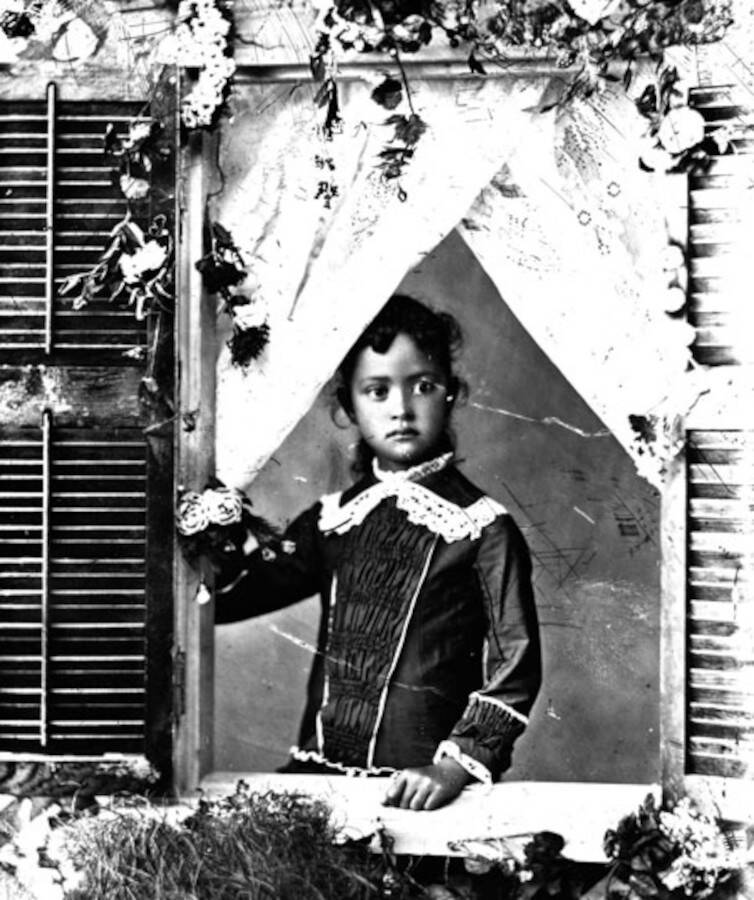 As a young girl, the Hawaiian princess was often seen in the company of the extended royal family at important ceremonies and events.

Ka’iulani’s early years were spent largely on ʻĀinahau, “certainly the most beautiful private estate in the Hawaiian Islands.”

Ka’iulani was given a Western-style education that her parents believed to be fitting for a princess, which chiefly included reading, writing, playing music, and lessons in etiquette.

For Ka’iulani it was “a pleasant time … a gracious time, reminiscent of bygone days,” spent playing with friends, riding her favorite pony, learning to paint, surfing, and enjoying the company of her American governess, Gertrude Gardinier.

But behind the glamor displayed for the public, her family was struggling to keep control over their kingdom. 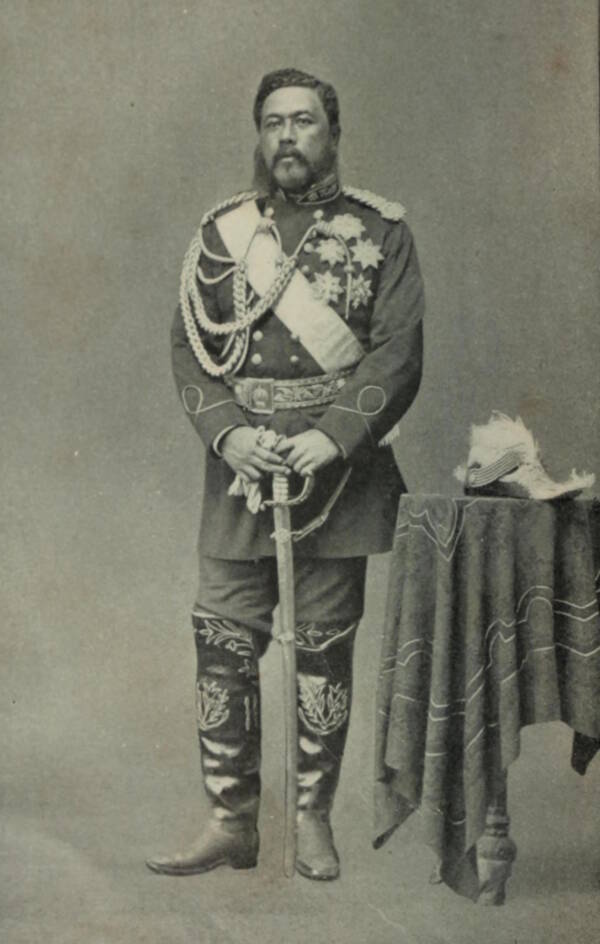 Wikimedia CommonsKing David Kalākaua, Ka’iulani’s uncle, attempted to secure Polynesia from European and American influence, but was forced to accept a reduced role in the government instead.

On July 21, 1886, Ka’iulani threw the switch which lit the grounds of ‘Iolani Palace in the first electric lighting in the country. Her uncle paraded his royal guard and thousands of guests marveled at the innovation, but the technological advance was soon overshadowed when Ka’iulani’s mother, Princess Likelike, became seriously sick.

During the long illness, Likelike allegedly foresaw that her daughter would leave Hawaii for a long time, never marry, and never be queen. When she died on Feb. 2, 1887, the kingdom was plunged into a period of national mourning and Ka’iulani became second in line to the throne.

It was then decided that Ka’iulani should finish her education in Britain, a country to which her family looked as a model of good royal governance.

At the same time, Cleghorn’s dry goods business was struggling, and King Kalākaua was constantly in the midst of controversy as he appointed one Western opportunist after another to important political positions. In response, a group of Hawaiians and American sugar barons mobilized a militia against him known as the Honolulu Rifles.

The Honolulu Rifles forced Kalākaua to sign away most of his power in a new constitution, even though Native Hawaiians wholeheartedly rejected it. The new constitution effectively handed control of the kingdom to a European-dominated legislature.

The king spent his remaining years on the throne as a figurehead, and during an 1890 trip to San Francisco, he died of Bright’s disease at the age of 54.

Ka’iulani was the first to hear the sad news as it traveled over Transatlantic telegraph cables to reach her at her boarding school in England.

The Downfall Of The Hawaiian Monarchy 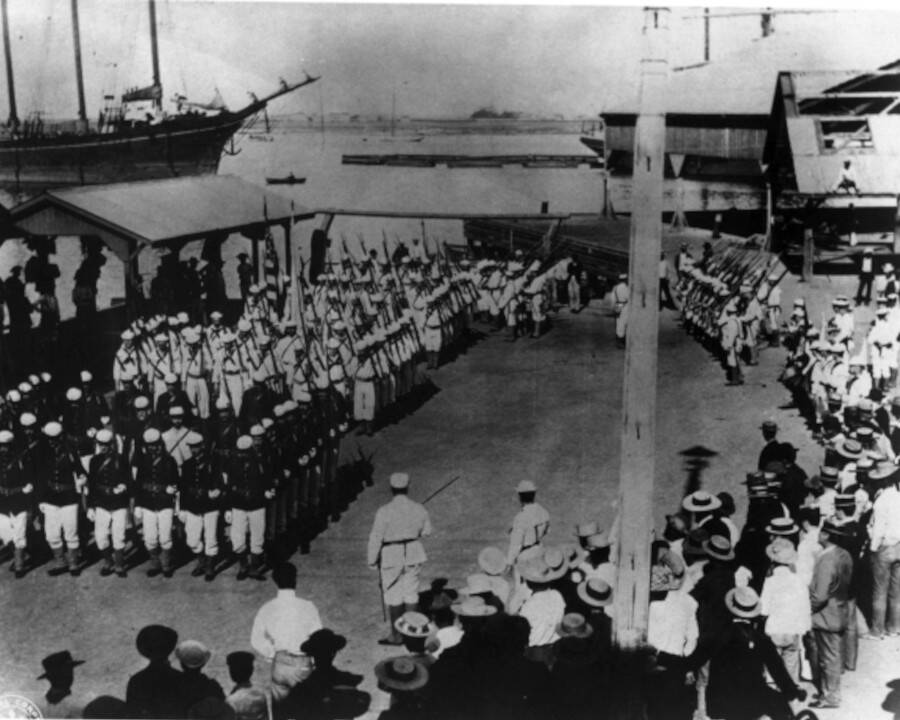 Hawaii State ArchivesPowerful American citizens, alarmed at Queen Lili’uokalani’s efforts to regain the crown’s power, called for help from sailors and marines aboard an American cruiser in Pearl Harbor.

The death of her brother came as a shock to the newly-crowned Lili’uokalani, who found herself on a throne with little power in the face of the wealthy sugar and fruit barons who dominated the islands’ economy.

Her first orders of business were to appoint Ka’iulani her heir, to reestablish the governorships of the main islands which had been abolished under the 1887 constitution, and to rid herself of her predecessor’s uncooperative cabinet ministers.

She began a series of efforts to undo the limitations placed on the crown, angering the American and European-descended Hawaiians who’d created them. 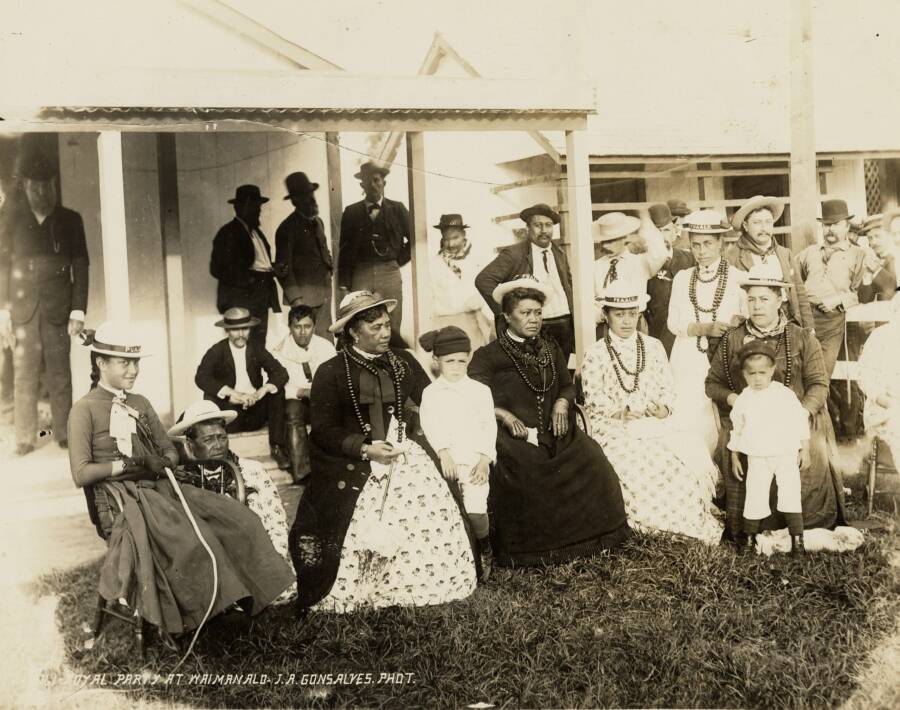 In England, Ka’iulani was nearing the end of her education and “beginning to feel very homesick.” But the princess would not return to her home for many years. In response to demands from Native Hawaiian leaders, Lili’uokalani drafted a new constitution in 1893 which would restore her power.

In response, American and European business owners in Honolulu formed a militia of non-Native men supported by United States sailors and marines from the USS Boston, which was anchored in Pearl Harbor. Against this overwhelming show of force, the queen’s troops were powerless.

Ascending to the balcony over the entrance of ‘Iolani Palace, lawyer Henry E. Cooper read a proclamation declaring the end of the Hawaiian monarchy and its replacement with a republic, “until terms of union with the United States of America have been negotiated and agreed upon.” 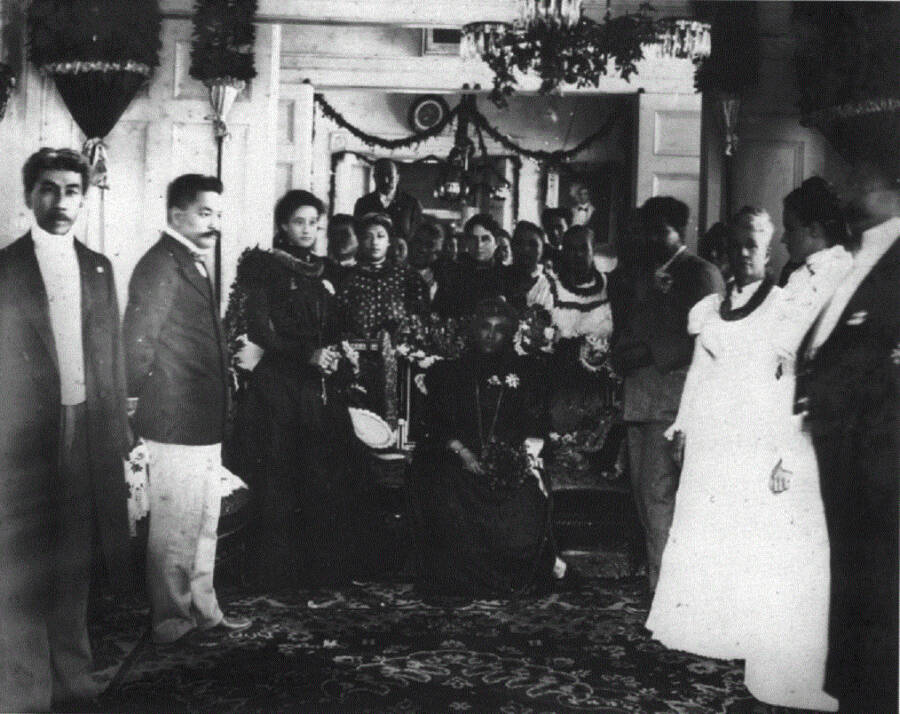 University of Hawaii at Manoa LibraryKaʻiulani and Lili’uokalani in mourning for the lowering of the Hawaiian flag. In the end, the former queen would outlive her heir by nearly 20 years.

In England, Ka’iulani’s guardian, Theophilus Davies, advised her to visit the United States to appeal for the restoration of the monarchy.

She took the opportunity to pay an informal state visit to President Grover Cleveland, who called the coup an unjustified “act of war,” but who was unwilling or unable to turn back the vast influence of the sugar barons in Washington political circles.

Amid rumors of war with Spain in November, 1897, Ka’iulani returned home for the first time in eight years. She and her father, along with the rest of Honolulu’s elite, offered a warm reception to American troops when their war against Spain finally broke out in April of 1898.

In Washington, Cleveland’s successor, William McKinley, convinced Congress to approve the annexation of the Republic of Hawaii on the grounds that the islands were vital for control of the Pacific. Without a kingdom to rule, Ka’iulani was adrift, and her family’s worsening financial situation threatened to make her penniless.

After riding through a rainstorm without a coat on, she became ill and grew progressively weaker. Taken to her childhood home at ʻĀinahau to recover, her condition instead worsened, and she died on March 6, 1899. She was just 23 years old.

Ka’iulani’s death was a devastating blow to her father, her aunt, and all the Hawaiians who’d opposed their country’s annexation. The Hawaiian royal family largely faded from politics — as did the memory of the kingdom’s last crown princess.

But over a century after her death, Princess Ka’iulani’s tragic legacy has been restored. Today, she is remembered as a young woman whose valiant efforts to protect Hawaii’s independence were a dignified testament to her commitment to her country.

Now that you’ve read the story of Princess Ka’iulani, learn more about the long and complicated history of Hawaiian and American relations. Then, read up on another famous female monarch, Princess Diana.