On August 31, 1997, Princess Diana was killed in a car crash while trying to escape the paparazzi — but some people think it was no accident.

Just after midnight on August 31, 1997, Princess Diana died when her car crashed into the cement barrier of a Paris tunnel. The Princess of Wales had officially divorced Prince Charles of England only a year earlier and had since been hounded by paparazzi, especially while she was visiting Paris with her then-boyfriend Dodi Fayed, a filmmaker from a wealthy Egyptian family.

The couple dined at the Hôtel Ritz that evening and then, around 11:30 PM, left through a back door to avoid the photographing crowds. But the paparazzi soon caught up with the couple’s limousine. 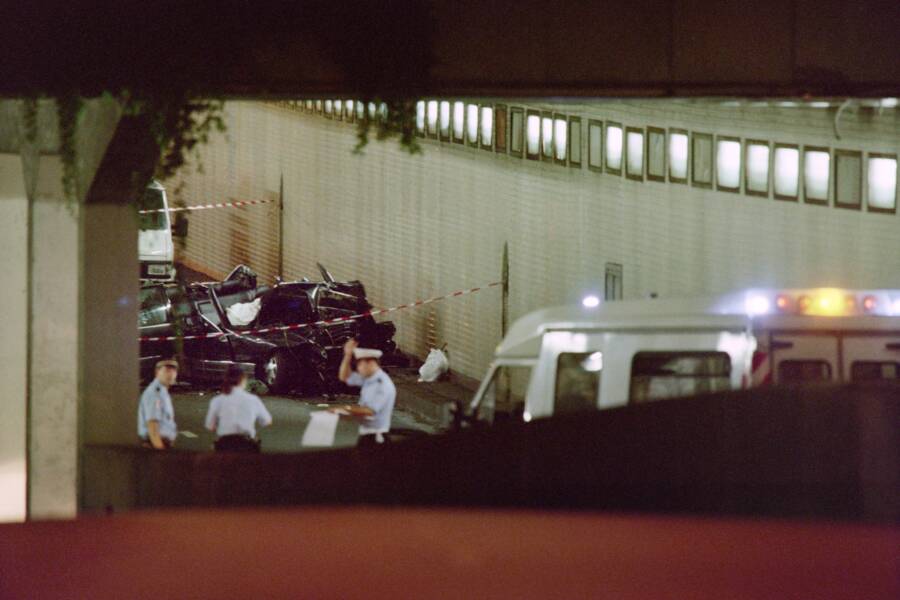 A high-speed chase through the streets of Paris ensued — and ended in tragedy when the car struck a pillar in the Pont d’Alma tunnel at 12:19 AM. The driver and Fayed died at the scene, but the People’s Princess was not yet dead. She was pronounced dead in the hospital at 4 AM. Princess Diana’s cause of death was officially a severed pulmonary vein.

A symbol of kindness and humanity, and a mother of two, Princess Diana was only 36 years old when she died. 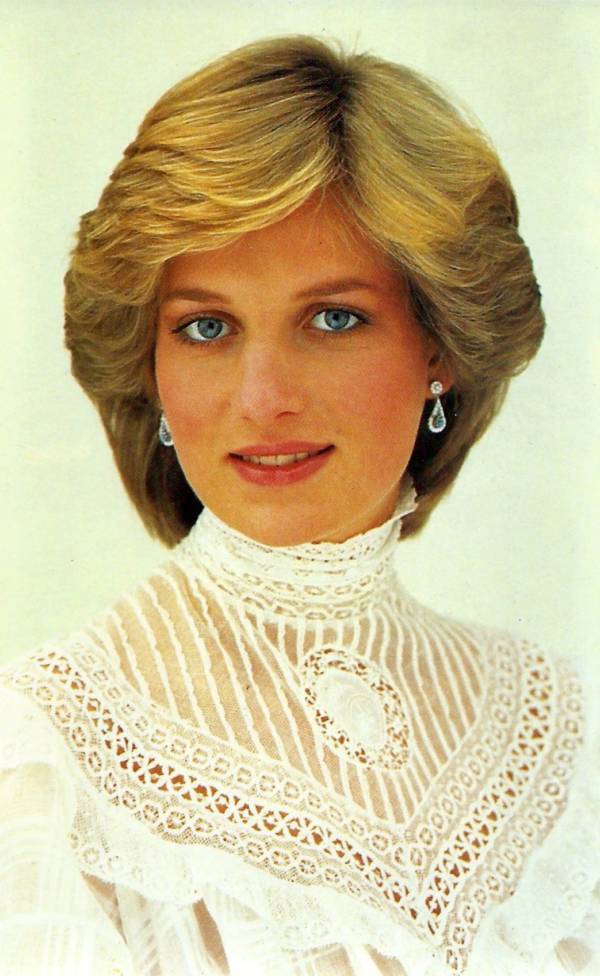 Diana Spencer joined the Royal Family on July 29, 1981, when she married Prince Charles, the son of Queen Elizabeth II and Prince Philip, at St. Paul’s Cathedral. She had just turned 20.

Wearing a voluminous gown detailed with 10,000 pearls and a 25-foot train, Spencer officially became a princess in front of a television audience of 750 million. Indeed, the Archbishop of Canterbury called the wedding, “The stuff of which fairy tales are made.”

While she was the Princess of Wales, Diana abandoned many royal traditions she found outdated and instead, devoted herself to philanthropy. She wanted to give her children a normal life and would stand in line at the department store to meet Santa despite her royal title.

Princess Diana consequently became famous for her charity work, which included helping those with AIDS and removing landmines. She was beloved by the public for her accessibility, relatability, and empathy. Then-Prime Minister Tony Blair was the first to fittingly refer to her as “The People’s Princess” and the moniker stuck. 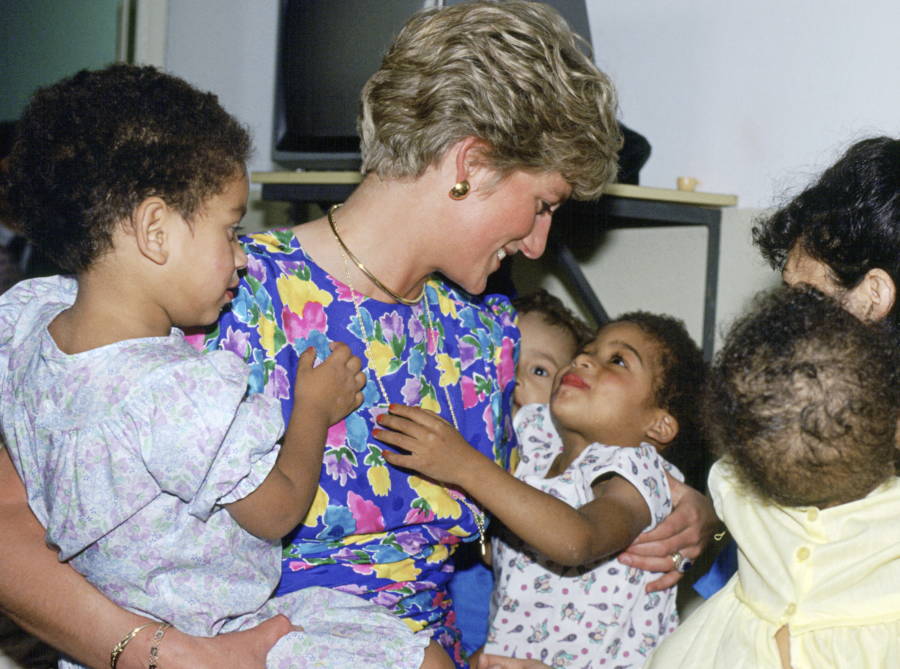 Tim Graham/Getty ImagesPrincess Diana also helped to destigmatize socially isolating illnesses like leprosy or AIDS by touching those who were affected by them as she would anyone else. Here she is in 1991 visiting a hostel for abandoned children in Sao Paulo, Brazil, many of whom were HIV positive.

Meanwhile, the Prince and Princess of Wales gradually — and very publicly — grew apart. Princess Diana claimed that was partly because of Prince Charles’s covert affair with his current wife Camilla Parker Bowles. In 1992, the couple announced a separation.

In a now-infamous interview with BBC’s Panorama in 1995, the Princess of Wales candidly revealed her personal struggles with depression and the Royal family, which made her all the more beloved by the public, though not with the Crown.

The Prince and Princess of Wales officially divorced in 1996. This decision rocked the Royal Family. After Princess Diana issued an announcement about the divorce in 1996, Buckingham Palace quickly contradicted her in public.

“All the details on these matters,” the Palace announced, “remain to be discussed and settled. This will take time.”

By 1997, the year Princess Diana died, she had moved on from her marriage and started dating Egyptian filmmaker Dodi Fayed. Her relationship with the Crown and her former mother-in-law, Queen Elizabeth II, remained strained. 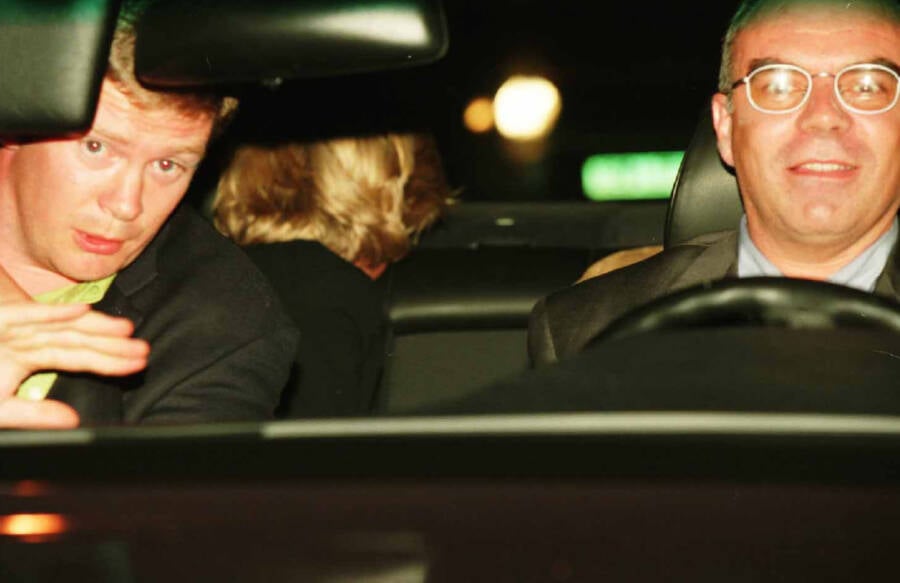 Jacques Langevin/Sygma via Getty ImagesThis is one of the last photographs of Princess Diana alive before the Mercedes she is in fatally crashed in Paris. The photo was used as evidence during an investigation into her death.

During the summer of 1997, Princess Diana traveled the Mediterranean with her new boyfriend Dodi Fayed, who was the son of Mohamed Al Fayed, the magnate that owned London’s Harrods department store and the Hôtel Ritz in Paris. On Fayed’s yacht, the pair visited the south of France and Sardinia.

News of the princess’s relationship appeared on the covers of British tabloids and paparazzi swarmed the couple whenever they could. The tabloids claimed that the Royal Family disapproved of the relationship and that Princess Diana’s butler called Fayed “a rebound.” But the day before Princess Diana died in a car accident, Fayed bought an engagement ring for her.

On August 30, 1997, Diana and Fayed arrived in Paris fresh off of a trip to the French Riviera. That evening, they visited the private Imperial Suite at the Hôtel Ritz for dinner. Close to midnight, the couple snuck out of the hotel to avoid the paparazzi waiting out front.

The couple jumped into the back seat of a Mercedes S-280 limousine. In the front was Trevor Rees-Jones, Princess Diana’s bodyguard, and their driver Henri Paul. To further evade the paparazzi, the couple even sent a decoy limo to the front of the hotel.

Nonetheless, the photographers quickly caught sight of the Mercedes carrying the couple. The driver sped up, trying to lose the motorcycles trailing them. 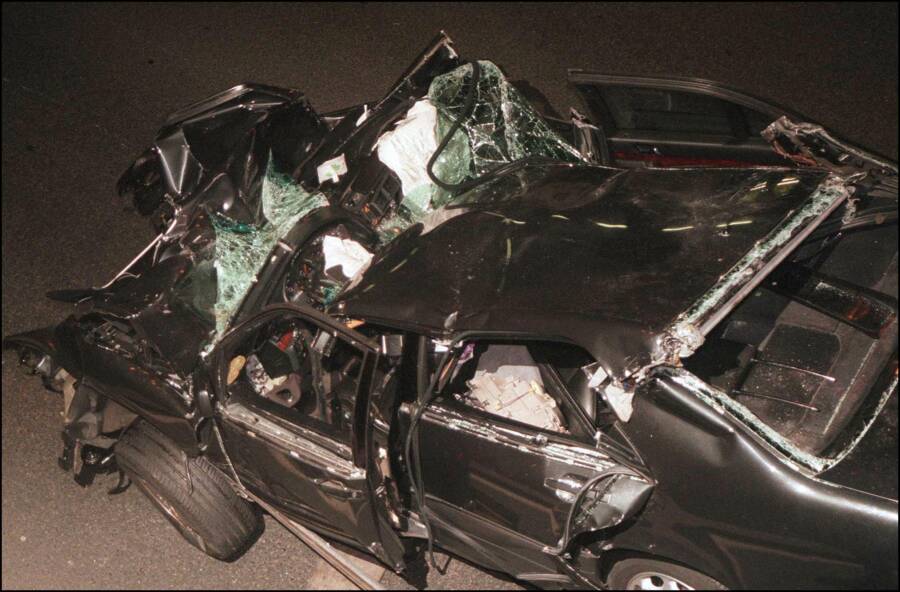 Driver Henri Paul led the paparazzi on a high-speed chase, traveling at twice the legal limit. At 12:19 a.m., the driver lost control of the Mercedes and crashed into a pillar of the Pont d’Alma tunnel next to the Seine.

The impact crushed the car. Paul and Fayed died instantly, but Princess Diana survived the collision. She was conscious and allegedly mumbled, “Oh my God” and “Leave me alone.” Medics rushed her to the nearby Pitié-Salpêtrière Hospital.

The princess’s injuries included a broken arm, chest injuries, a cut in her thigh, and a concussion. Surgeons operated for two hours, but Princess Diana did not again regain consciousness. She was declared dead at 4 AM on August 31, 1997.

Shephard believed that a seatbelt would have saved her life. “Had she been restrained, she would probably have appeared in public two days later with a black eye, perhaps a bit breathless from the fractured ribs and with a broken arm in a sling,” Shepherd wrote in 2019.

Trevor Rees-Jones, Princess Diana’s bodyguard, was the only person in the car to survive. He had been wearing a seatbelt.

Stephane Darmon, a motorcyclist who witnessed the car crash, claimed that the blinding flashes from nearby paparazzi cameras completely obscured his view of the accident. “I did not see the car any more because the light was so bright. It was continuous,” Darmon said in 2008.

It was also reported that rather than helping the victims from the crushed vehicle, many of the paparazzi continued to snap photos. 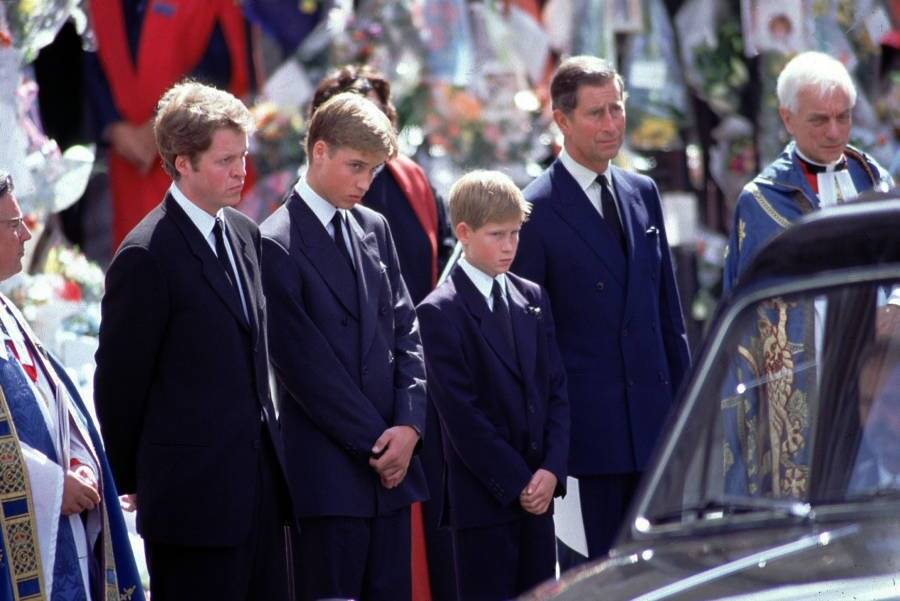 According to one witness present when the Queen first heard the news of Princess Diana’s death, she exclaimed, “Someone must have greased the brakes.” The witness was horrified by her reaction, but ultimately chalked it up to the Queen’s own shock.

The British public grieved their princess openly and apparently wished that their monarchy would do the same. The Queen was criticized for not leaving her holiday retreat at Balmoral Palace in Scotland and returning to London immediately and the public wanted to know why the flag before Buckingham Palace was not at half-mast.

In London, mourners encircled Buckingham Palace with flowers and shrines. On September 6, 1997, a million mourners lined the streets for the princess’s funeral procession. An additional 2.5 billion watched on television.

At the funeral, 15-year-old William and 12-year-old Harry walked behind their mother’s coffin on the journey from Buckingham Palace to Westminster Cathedral.

In 2017, both spoke out about the experience. “It was one of the hardest things I’ve ever done, that walk,” Prince William told the BBC. “It felt she was almost walking along beside us to get us through it.”

Prince Harry spoke more bluntly in a Newsweek story. “My mother had just died, and I had to walk a long way behind her coffin, surrounded by thousands of people watching me while millions more did on television,” he said. “I don’t think any child should be asked to do that, under any circumstances. I don’t think it would happen today.” 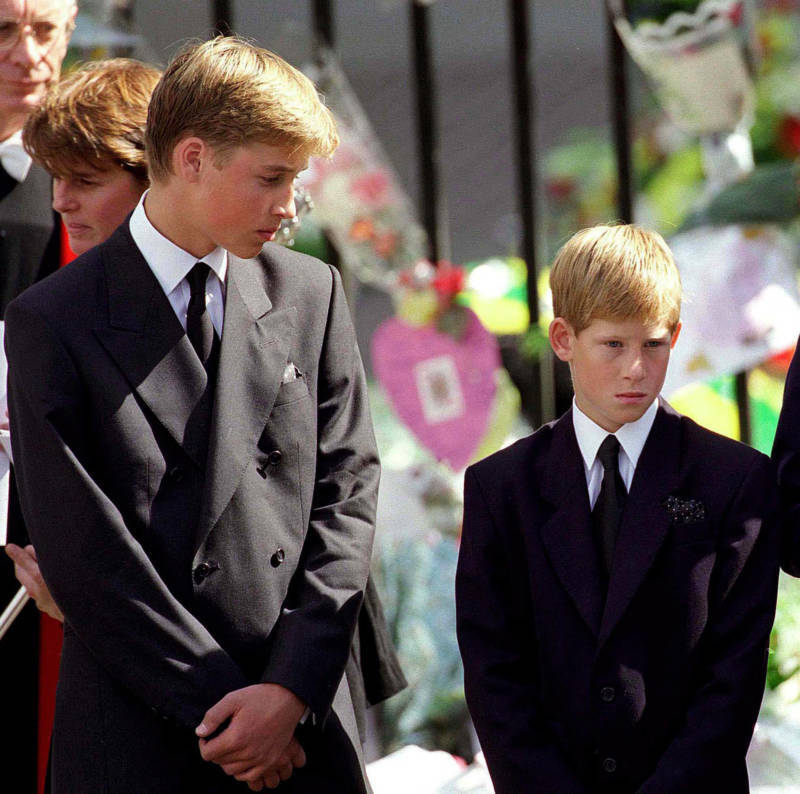 Queen Elizabeth waited nearly a week after Princess Diana died to make a public statement about it. According to Prime Minister Tony Blair, the queen’s reluctance stemmed from her having “a view of Diana that was more conflicted than the public could accept.”

Many saw the queen’s response as cold, prioritizing protocol over recognizing the nation’s shock and grief. On September 5, 1997, the queen said:

“What I say to you now as your Queen and as a grandmother, I say from the heart. First, I want to pay tribute to Diana, myself. She was an exceptional and gifted human being… I admired and respected her for her energy and commitment to others, especially for her devotion to her two boys.”

As an adult, Prince Harry expressed remorse at keeping his mourning intensely private. In 2016, he said:

“I really regret not ever talking about it… It is okay to suffer, but as long as you talk about it. It is not a weakness. Weakness is having a problem, and not recognizing it, and not solving that problem.”

An Investigation Into How Princess Diana Died Inspires Conspiracies

French and British authorities investigated the cause of Princess Diana’s death and both blamed the driver, Henri Paul, for the crash. His blood-alcohol level exceeded the legal limit and he had been driving double the speed limit.

But conspiracy theories quickly spread about what actually happened to Princess Diana. One theory claimed that the Royal Family ordered her assassination in order to prevent further scandal. Fayed’s father publicly claimed that MI6 was behind the accident.

Other theories posited that Princess Diana was secretly pregnant with Fayed’s child, though forensics disproved that claim. 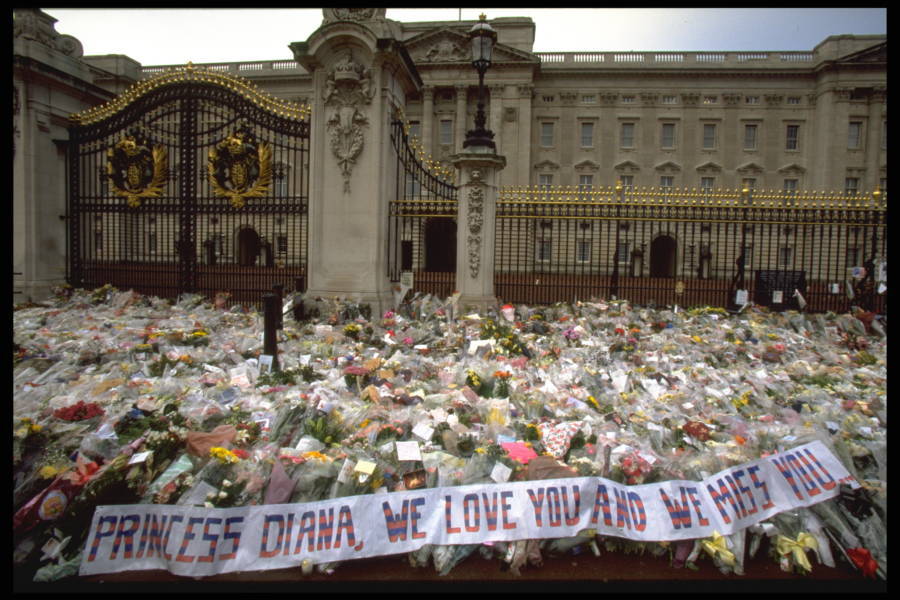 Jon Jones/Sygma/Sygma via Getty ImagesMourners left flowers outside of Buckingham Palace in London.

Because neither Diana nor Fayed wore their seatbelts, other conspiracy theorists claimed that someone had sabotaged them. But French and British investigators undermined that claim after inspecting the wreckage.

But a note written by the People’s Princess less than a year before her death confounded still others. “I am sitting here at my desk today in October [1996],” the note read. “This particular phase in my life is the most dangerous. X is planning ‘an accident’ in my car, brake failure and serious head injury in order to make the path clear for Charles to marry.”

A 2008 inquest tried to dispel the conspiracy theories with facts. According to the inquest jury, Paul and the paparazzi were both guilty of “gross negligence.”

Although she died tragically, Princess Diana made a lasting mark on Britain and the world. As an advocate and philanthropist, Princess Diana fought for vulnerable people. She also put a more human face on the Royal Family, which inspired her sons to follow a similar philosophy with their own families.