In August 1955, Carolyn Bryant claimed that 14-year-old Emmett Till sexually harassed her — which led to his horrific lynching days later. But more than 60 years later, she finally admitted that her accusation was a lie.

On August 28, 1955, a 14-year-old African-American named Emmett Till was kidnapped from his relative’s home in Mississippi by two adult white men, who brutally beat him to death. His badly disfigured body was found in the Tallahatchie River three days later.

Roy Bryant and his half-brother J.W. Milam were charged with Till’s murder. Following the highly-publicized case, it was later revealed that they had killed the young boy after Bryant’s wife, Carolyn Bryant, accused Till of physically grabbing her and making lewd comments. 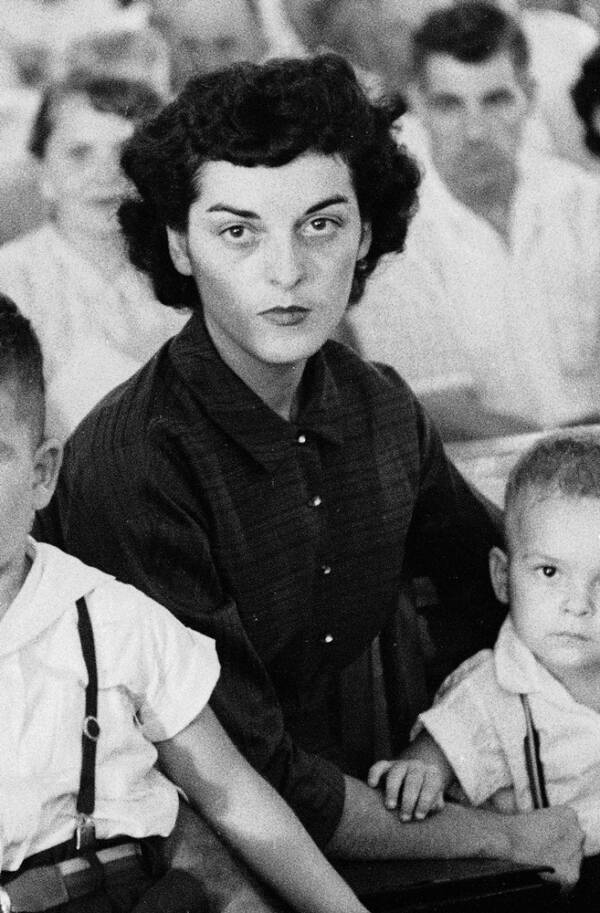 Ed Clark/The LIFE Picture Collection via Getty ImagesIn 1955, Carolyn Bryant accused 14-year-old Emmett Till of sexually harassing her. Till was later murdered by her husband and brother-in-law.

Emmett Till’s lynching devastated the African American community, sparking a mass outcry from civil rights activists. Then, 62 years after Till’s murder, a researcher who interviewed Bryant wrote that she had confessed to lying about Till.

But did she really admit to what many had long suspected?

Discover the story of Carolyn Bryant Donham, the white woman whose accusation against Emmett Till led to the black teen’s lynching.

Who Is Carolyn Bryant? 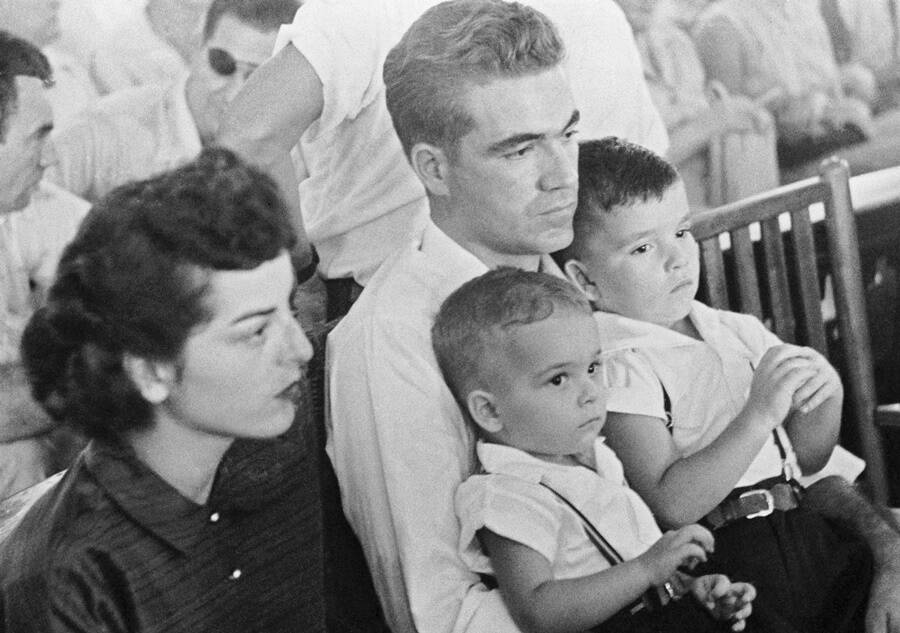 Getty ImagesCarolyn Bryant (left) alleged that the incident happened in the shop she owned with her husband, Roy Bryant (right).

Before she became notorious for accusing Emmett Till of sexual harassment, Carolyn Donham was born in 1934, the daughter of a plantation manager and a nurse in Indianola, Mississippi.

Later, she met Roy Bryant, an ex-soldier who she married and had two sons with. Together they owned a store named Bryant’s Grocery & Meat Market in Money, a small town in the middle of the Mississippi Delta.

Not much is known about her life before Till’s infamous murder, but what is known paints the story of a white woman who grew up in an environment where blunt and violent displays of racism were ordinary. 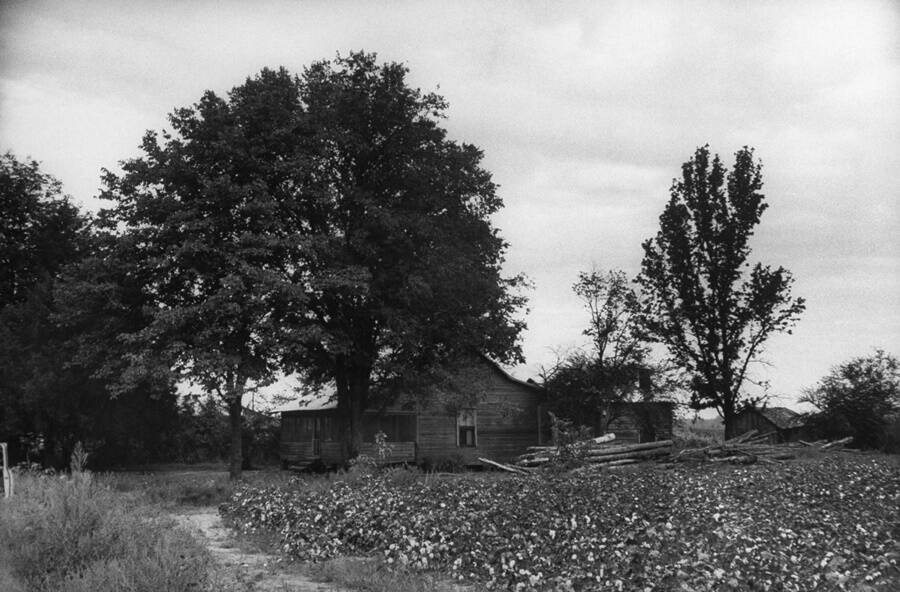 Indianola, where Carolyn Bryant Donham was from, was the base of the Citizens’ Councils, which was a network of white supremacist organizations that opposed integration.

Money, where the couple’s store was opened, was in Mississippi, which had the highest number of lynchings in America from 1882 to 1968.

“[She] thought the old system of white supremacy was wrong, though she had more or less taken it as normal at the time,” said Timothy Tyson, author of The Blood of Emmett Till. To this day, Tyson remains one of the only people to ever interview Carolyn Bryant.

The Lynching Of Emmett Till 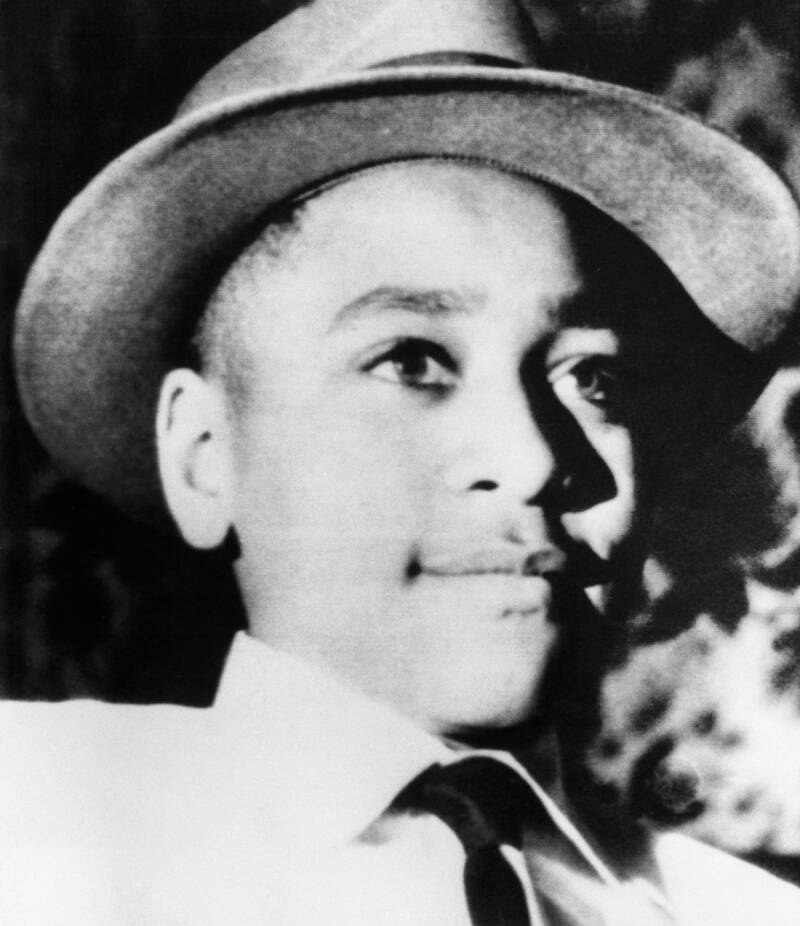 On August 28, 1955, Emmett Till, who was from Chicago and visiting family in Mississippi, was beaten to a pulp until his body was mutilated beyond recognition. Shortly thereafter, he succumbed to his injuries.

The perpetrators were Roy Bryant and his half-brother, J.W. Milam. They kidnapped the teenager from his great-uncle’s home and beat him to death after Carolyn Bryant accused him of sexually harassing her.

Till’s murder — only a year after the Supreme Court ruled in favor of desegregation in the historic Brown v. Board of Education case — sparked a mass outcry from civil rights organizations. The haunting image of the black teen’s body, photographed in Jet magazine after Till’s mother decided to hold an open casket ceremony for her son, fueled the civil rights movement.

It is still unclear what truly happened between Till, who was only 14 at the time, and Carolyn Bryant, then 21. One thing that is certain is the massive changes in Bryant’s account throughout the years.

Days after her husband and brother-in-law were charged with Till’s murder, Carolyn Bryant reportedly told her husband’s lawyer that Till insulted her but she did not mention any physical contact.

During the trial, Emmett Till’s accuser testified — without the jury present — that he followed her behind the counter, clasped her waist, and told her that he had been with white women before while using vulgar language.

“I was just scared to death,” Bryant said on the stand at trial. There was also a version of her story that claimed Till had whistled at her, though that is unlikely because he was said to have a lisp. 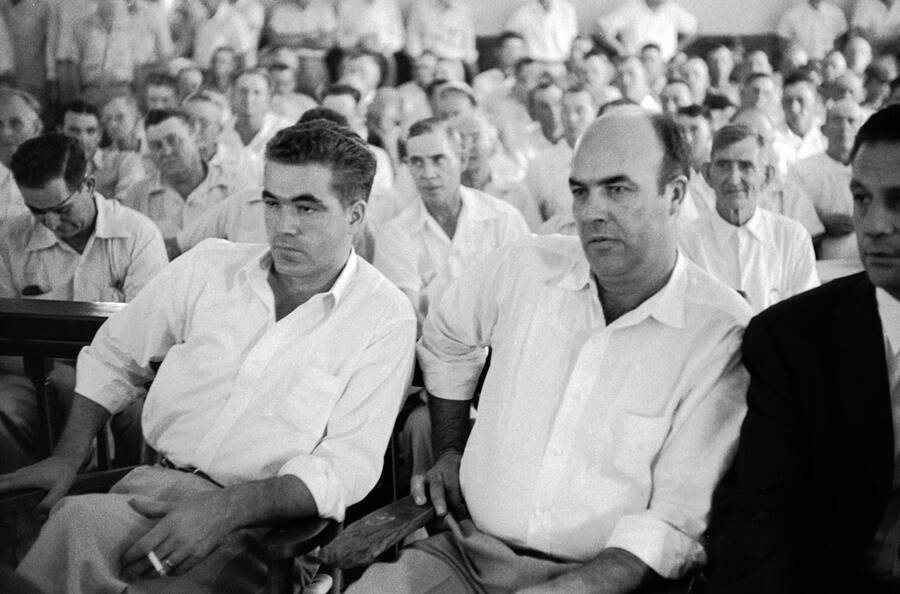 Ed Clark/The LIFE Picture Collection via Getty ImagesRoy Bryant (left) and J.W. Milam (right) were acquitted of murder charges just a month after they killed Till.

There were also discrepancies in how her husband “found out” about Till’s alleged behavior. Initially, Carolyn Bryant Donham claimed she told her husband once he returned from a trip.

Later she told the FBI that her husband heard about it from someone who witnessed the exchange.

“I didn’t say anything, and one of the reasons I didn’t ever say anything more about it, was because I was afraid that, what I was worried about was he’s gonna go find and beat him up,” she told FBI agent Dale Killinger.

A month after being charged with Till’s murder, Bryant and Milam were acquitted by an all-white jury. The men later admitted to killing the teenager in a 1956 interview with Look magazine.

Carolyn Bryant, meanwhile, essentially went into hiding after her appearance in Till’s trial.

The White Lie That Killed Emmett Till 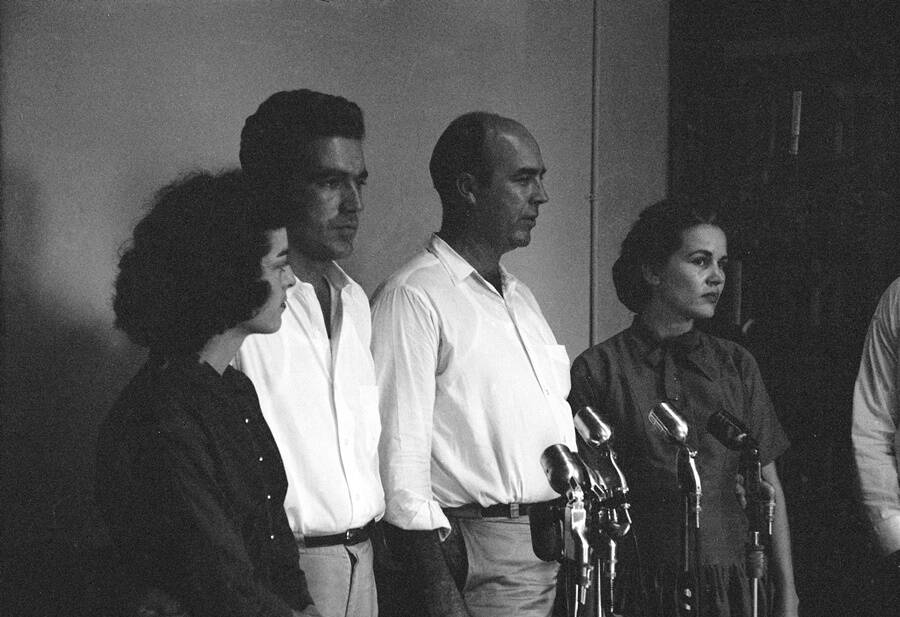 In 2017, Carolyn Bryant Donham was back in the headlines after author Timothy Tyson revealed that Bryant admitted to him in a 2008 interview that her 1955 accusation against Till was false.

In his book The Blood of Emmett Till, Tyson described Bryant’s recollection of the event as such:

“In her memoir she recounts the story she told at the trial using imagery from the classic Southern racist horror movie of the ‘Black Beast’ rapist. But about her testimony that Till had grabbed her around the waist and uttered obscenities, she now told me, ‘That part’s not true.'”

Bryant, who is now in her 80s and the only living key figure from the case, added that she couldn’t remember the details of what happened in the store more than 60 years ago. She said, “Nothing that boy did could ever justify what happened to him.”

Tyson wrote that Emmett Till’s accuser also admitted she felt “tender sorrow” for his mother, Mamie Till-Mobley, who devoted her life to the civil rights movement before her death in 2003.

After Carolyn Bryant’s recantation, the Department of Justice reopened Till’s murder case. Tyson turned in his materials to the FBI, including written notes and tape recordings of his interview with Bryant.

News of Bryant’s admission sparked renewed outrage. But her family denied she had confessed to lying about the incident with Till. 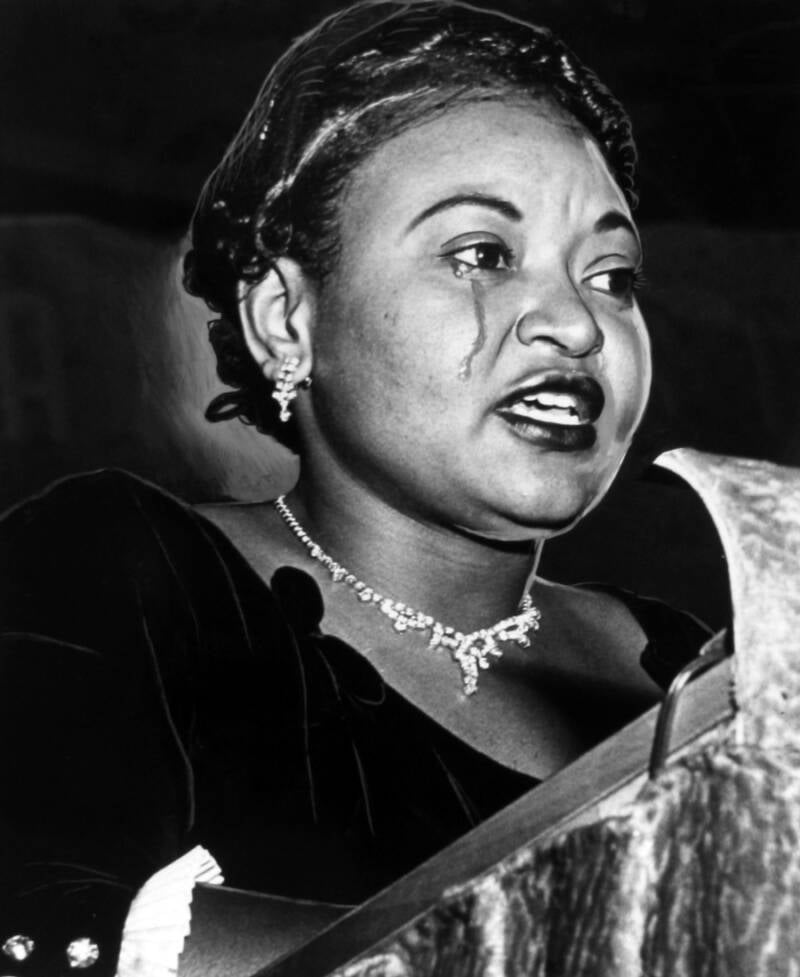 Afro American Newspapers/Gado/Getty ImagesMamie Till Mobley, Till’s mother, dedicated her life to the civil rights movement after her son’s murder until her death in 2003.

Tyson admitted that he had not caught the woman’s confession on tape — because he was in the midst of setting up the recorder — but he scrawled her statement on his notepad. Tyson shared a photo with the Clarion Ledger of his notes: “That pt wasn’t true…50 yrs ago. I just don’t remember…Nothing that boy ever did could justify what happened to him.”

As recent as May 2020, a video of a white woman named Amy Cooper went viral when she feigned hysteria and claimed to police that she was being threatened by a black man named Christian Cooper. Fortunately, with a video recording, the man was able to document the disturbing lie.

But for each false claim caught on camera, countless others go unchallenged, like the accusation against Emmett Till, who suffered the ultimate consequence.

As for Till’s surviving loved ones, they were satisfied to hear that Bryant had finally confessed to lying.

“I was hoping that one day she would admit it, so it matters to me that she did, and it gives me some satisfaction,” said Wheeler Parker, a cousin of Till’s, over the news of Carolyn Bryant Donham’s confession.

“It’s important to people understanding how the word of a white person against a black person was law, and a lot of black people lost their lives because of it. It really speaks to history, it shows what black people went through in those days.”

After reading about Carolyn Bryant and the accusation that led to the lynching of Emmett Till, read how the teenager’s memorial has become a target of vandalism by modern-day racists. Then, take a powerful look at America’s first memorial to victims of lynching.