"We have seen thousands of amber fossils but the preservation of color in these specimens is extraordinary." 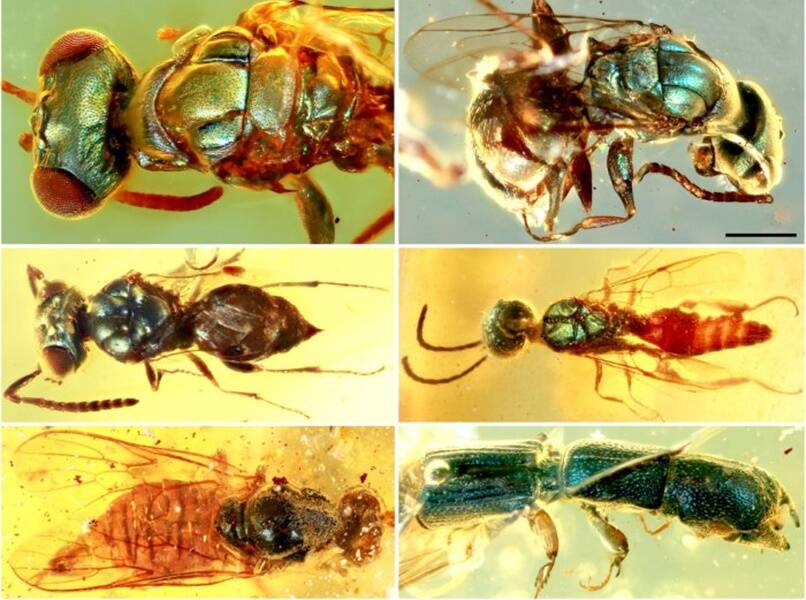 Cai et alScientists have been able to unlock the secret behind the vibrant colors of prehistoric insects using these 99-million-year-old specimens.

Although scientists have been able to mine a great deal of information about prehistory from fossils, they are not always able to determine an animal’s coloring.

But according to Science Alert, a swarm of prehistoric insects fossilized in amber is showing scientists just how vibrantly colored the world was 99 million years ago.

“We have seen thousands of amber fossils but the preservation of color in these specimens is extraordinary,” said Huang Diying from the Nanjing Institute of Geology and Paleontology of the Chinese Academy of Sciences (NIGPAS) and a co-author of the study.

These insects have been so well preserved in tree resin that researchers from NIGPAS can now see a wide range of vivid coloring across them, including metallic greens, purples, and blues. These remarkable findings were published in the Proceedings of the Royal Society B: Biological Sciences on July 1, 2020.

Observing the coloration of prehistoric bugs is integral to creating a picture of their ecology because a creature’s coloring often facilitates their life in the wild. The coloration of bugs, for example, typically serves as a form of camouflage from predators or to attract mates.

Researchers analyzed 35 amber specimens that date back to “the golden age of dinosaurs” in the mid-Cretaceous period some 99 million years ago. They were found in an amber mine in northern Myanmar.

But this batch of preserved insects, in particular, offered something special. 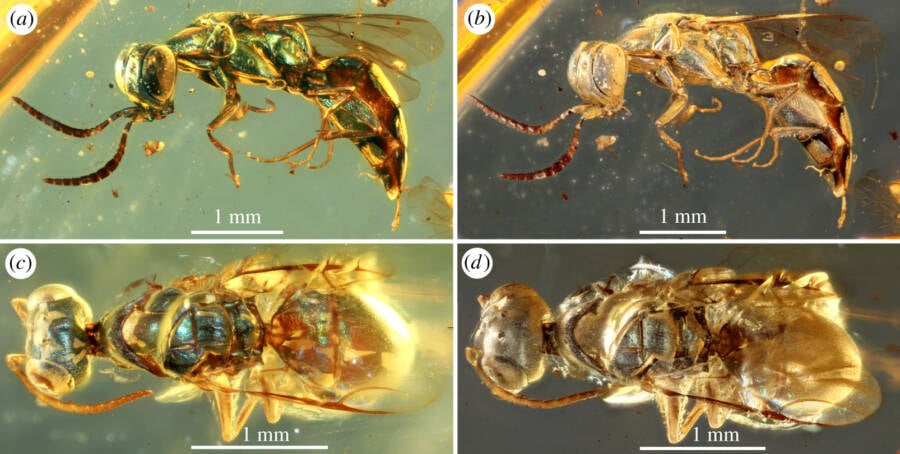 Cai et alThe exoskeletons on these colorful insects (left) have remained intact because of the tree resin that encapsulates them.

An analysis revealed wholly-intact beetles, cuckoo wasps, and a soldier fly all in bright hues of various shades. Their iridescence reportedly is due to the anatomical or nanostructure of their exoskeletons.

“The surface nanostructure scatters light of specific wavelengths and produces very intense colors. This mechanism is responsible for many of the colors we know from our everyday lives,” explained Pan Yanhong, a specialist on paleocolor reconstruction who was also involved in the study.

But why did these bugs have more vibrant coloring than other specimens found in amber? To answer this, the researchers used diamond knife blades to cut through the exoskeleton of two of the wasps and a sample of normal dull cuticle from an amber specimen not part of the colorful batch.

By using electron microscopy, the scientists found that the nanostructures in the dull-looking specimen were badly damaged which explained their mostly brown and black coloration. 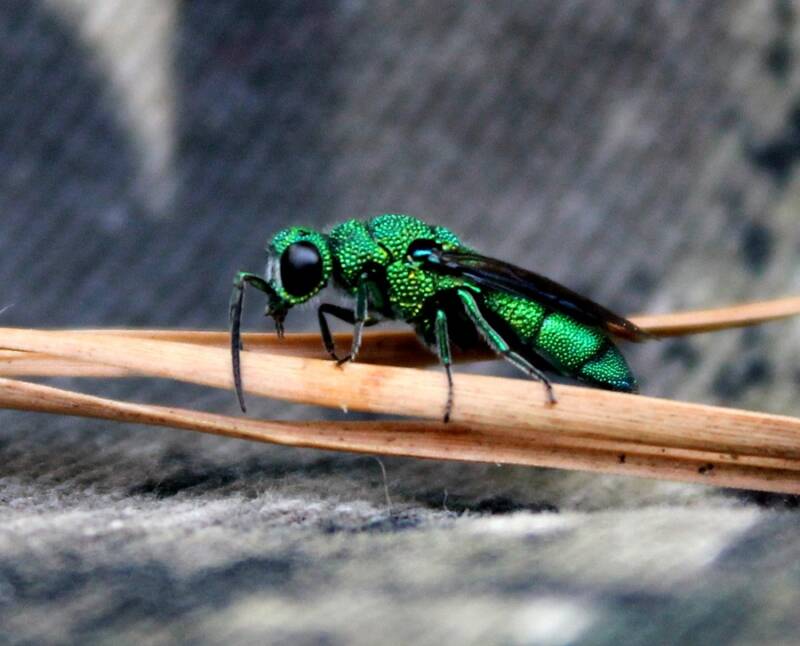 Wikimedia Commons The bold green color of modern cuckoo wasps (pictured) are very similar to the coloring of their prehistoric ancestors.

The nanostructures on the colorful amber specimens, meanwhile, were perfectly intact, which explained why they remained so colorful even after 99 million years. These findings suggest that the vibrant coloring seen now on these prehistoric bugs was likely how they looked when they were alive.

In fact, some of that vibrant coloration was passed down to their modern descendants today. Scientists found that the coloring on the ancient cuckoo wasps was almost identical to the existing species.

Studying specimens found in amber has been integral to uncovering the secrets of the prehistoric world. However, scientists have been grappling with the ethics of this field of study in recent years due to the unrest in Myanmar, where amber fossils are mostly harvested.

In 2019, a report published by Science Magazine detailed how these fossils are mined in a Myanmar state where the military has been entrenched in a deep conflict with the Kachin ethnic minority, and are then sold abroad in China, only fueling the conflict.

As science continues to experience advances in technology, there will surely be more ways to unlock prehistory without sacrificing human decency.

Next, read about two new ancient species of cockroach that were also found trapped in Myanmar amber. Then, take a look at the fossilized beetle that scientists believe may have been one of the first insects to pollinate on Earth.