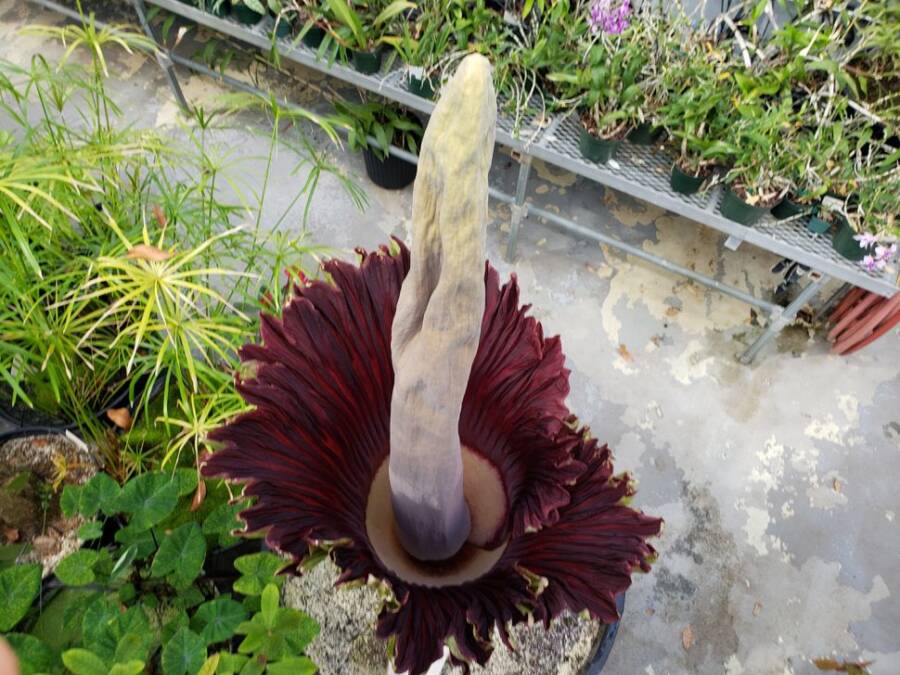 Live ScienceA rare ‘corpse flower,’ which is native to Indonesia, blooomed for the first time in Manhattan’s Upper West Side.

A rare natural phenomenon recently happened in New York. A gigantic corpse flower made its first bloom — and it took 10 years for it to happen.

According to Live Science, the corpse flower, known by its scientific name Amorphophallus titanum, arrived at the Arthur Ross Greenhouse at Barnard College in 2013 as a gift from the Brooklyn Botanical Garden.

It was a remarkable gesture; A. titanum are native to the island of Sumatra, Indonesia, and have a reputation for being the largest flower known to botanists.

Not only are they recognizable by their enormous size — typically measuring up to 10 feet tall — these plants have a distinctly putrid smell. Hence, their nickname “bunga bangkai” which translates as corpse flower.

A timelapse of a ‘corpse flower’ bloom over the course of a couple of weeks.

“It’s like mature cheese,” said Barnard’s Greenhouse Director Hilary Callahan, who is also a professor of biological sciences at the college, describing the plant’s foul odor. “Or the feet of someone you really like.”

The plant’s putrid smell comes from its high temperature — one corpse flower was documented to reach 96 degrees Fahrenheit.

This process allows the plant to synthesize chemical compounds like trimethylamine and isovaleric acid, both of which produce smells reminiscent of rotting fish and gym socks. The heat also helps disperse its smell further out so that it can attract bugs for pollination.

The first flower to bloom outside of Indonesia’s tropical climate was a plant in London in 1889. But since the advent of agricultural technology, other corpse flowers have successfully been grown in other countries, too, like Brazil, India, Germany, and Australia.

There are a few dozen of these plants grown in greenhouses and other institutes in the U.S. today. 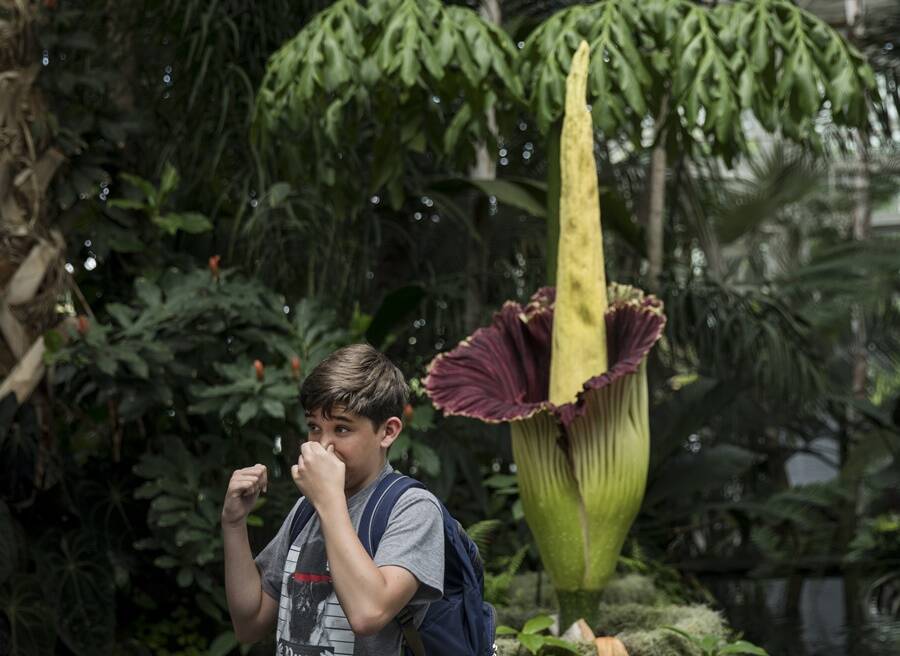 Drew Angerer/Getty ImagesA boy holds his nose to ward off stench while visiting the ‘corpse flower’ at the New York Botanical Garden in 2018.

When the school’s own corpse flower first arrived, it looked like a large bulbous potato and weighed about one pound. Greenhouse horticulturist Nicholas Gershberg took care of the plant until it reached its current size standing five feet tall and weighing over 40 pounds.

Still, their corpse flower bloom did not happen until April 2020, when the plant’s giant flower began to unfurl to reveal a large stalk erected in its center. It continued to blossom over two months until it was in full bloom in late May 2020.

“Then it dramatically opened up like a pleated cloak, or a collar of a fancy blouse,” Callahan said. “We joked that it looks like a costume [theatrical Broadway actor] Billy Porter would wear on the red carpet.”

While visitors were unable to view the rare corpse flower bloom at the greenhouse in-person due to health closures during the pandemic, the greenhouse team setup a livestream viewing so the public was able to see the phenomenon safely at home. See the livestream below:

A livestream of the ‘corpse flower’ bloom at Barnard College’s greenhouse.

The average time it takes before a corpse flower’s first bloom is about seven to 10 years, depending on external factors like the amount of sunlight and water it gets.

Juvenile A. titanum produce one giant leaf every year which eventually withers and dies. But its tuber, where plants typically store their energy and nutrients, continues to grow.

It produces another green shoot the next year so that it can absorb as much sunlight as possible, repeating this until they fully sexually mature.

By this time, after several years, they are ready to flower. As the corpse flower continues to reverse its bloom, its pungent odor will still linger for several more weeks until it finally withers.

The greenhouse team hopes to extract a sample of the blossom before then to use for further study and repot its underground tuber so that it might grow and bloom again in another few years.

Next, go inside the terrifying poison garden at Alnwick and check out six of the world’s strangest plants.