Crixus: Spartacus’ Right-Hand Man Who May Have Been The Gladiator Army’s Downfall

By some accounts, the slave army was ultimately defeated because of Crixus' "arrogance and presumption."

Thanks to the iconic 1960 movie, the gladiator rebel “Spartacus” is known even to those with the barest grasp of Roman history. But despite the popularity of the story of the famous slave rebellion, surprisingly little is known about Spartacus’ right-hand man, Crixus.

When gladiator trainer Lentulus Batiatus bought Spartacus and sent him to be trained in Capua, he could hardly have imagined that the name of his new property would be remembered for thousands of years.

The Roman writer Florus, who lived over a century after the slave rebellion, claimed that Spartacus was a mercenary from Thrace which was a small area bordered by the Balkans and Mediterranean. Spartacus reportedly deserted the Roman army before becoming “thanks to his strength, a gladiator.”

It was at this school in Capua that he met fellow slave Crixus. Like Spartacus, little is known about Crixus before his role in the slave uprising which became known as the Third Servile War. Historians suspect that Crixus originally came from Gaul since his name has Celtic origins. Crixus is a cognate of the Latin “Cripsus,” meaning “curly-headed.”

Despite the glamorized portrayal of gladiators by Hollywood, Spartacus and Crixus were viewed as mere property by Lentulus Batiatus and they were treated little better than animals. Plutarch describes how “they had done nothing wrong, but, simply because of the cruelty of their owner, were kept in close confinement until the time came for them to engage in combat.”

Gladiators train in the 1960 film Spartacus.

By 73 B.C., Spartacus could no longer bear life as a slave and he began to devise a plot to escape. The original plan was simply for a group of around 200 slaves to flee over the Apennines out of the reach of the Romans, but the plan was thwarted when their captors caught wind of the plan.

Rome had already dealt with two slave revolts in the past 50 years and though both had been successfully quelled, they had exacted heavy tolls. In a city where slaves greatly outnumbered citizens, the thought of a servile revolt struck a special terror into the hearts of the Romans, and any would-be rebels were dealt with mercilessly.

But instead of submitting to torture and death, the slaves decided to make a preemptive strike. A group of around 78 other gladiators managed to seize weapons from the kitchens and fight their way out of the school before fleeing into the countryside. There, Spartacus, Crixus, and a third gladiator, Oenomaus, were elected the rebels’ leaders.

Under the leadership of the three men, the slave army began to plunder the surrounding countryside. As news of their success and democratic proceedings spread, more and more slaves rallied to join them and soon their numbers would reach to over 70,000 former slaves. 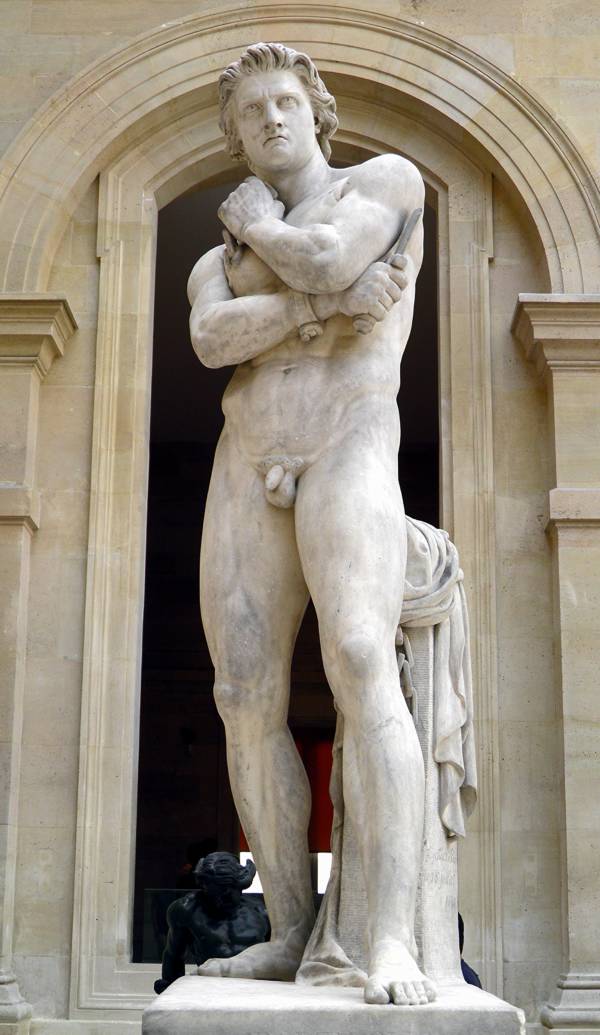 What was once an escape plan for the slaves became all-out warfare, which historian Appian reported was because the slaves “who had been originally content merely to have escaped, soon began to wish to take their revenge also.”

But other sources claim that it was Crixus who persuaded Spartacus to “loot” the countryside. Although Crixus fought bravely under his commander, the two often butted heads and the slave camp was often fraught with their tension.

The Romans initially viewed the runaway slaves as nothing but a group of roving bandits and sent General Gaius Claudius Glaber with a force of largely inexperienced troops to deal with them. The Senate assumed that the untrained mob of slaves would panic and break ranks at the first sight of the Roman military, but that was certainly not so.

Spartacus, Crixus, and Oenomaus led their army efficiently and cleverly. Under the leadership of the former gladiators, the slave army dealt Glaber a crushing defeat. Now seriously alarmed, the Romans sent in a second military force under Publius Varinius. The slaves not only annihilated this army as well but “Spartacus himself actually captured Varinius’ horse from under him; so nearly was a Roman general taken prisoner by a gladiator.”

The slave army had defeated two Roman generals and, as Plutarch reports, “there was now more to disturb the Senate than just the shame and the disgrace of the revolt…The situation had become dangerous enough to inspire real fear.”

But just when the group of rebels seemed poised for victory and break free forever from the yoke of Rome, they made a fatal mistake.

A dramatized depiction of Crixus and Spartacus butting heads.

For reasons unknown to the Romans and still unknown today, the slave army split into two with one faction being led by Spartacus, and the other by Crixus. Plutarch, however, suggests that the split was hostile, with Crixus departing because of his “arrogance and presumption.”

It has been speculated Crixus wanted to take advantage of the chaos and march on Rome itself, while Spartacus was finally ready to flee and return home, free. It might simply have been that by that point, the army had become too large to move efficiently as one force. Whatever the grounds for the split, it was the opportunity the Romans had been waiting for.

Within the year, Crixus’s lesser force of 30,000 men had come under attack by the army of Lucius Gellius near Mount Gargano. It was the first time Crixus was tested by the Romans on his own and “although he was Spartacus’s equal in courage” he was not “in common sense.” The slave army suffered its first defeat and Crixus himself was killed in battle.

Spartacus mourned the loss of his most trusted lieutenant and decided to honor him with an ironic tribute. Gladiatorial games had originated as Roman funeral rites and so to honor his friend and mock the men who had once forced them to right, Spartacus staged his own games.

This time though the captured Roman officers fought as gladiators and the slaves made up the crowd which cheered on every blow, “as though [Spartacus] wished to wipe out all his past dishonor by having become, instead of a gladiator, a giver of gladiatorial shows.” 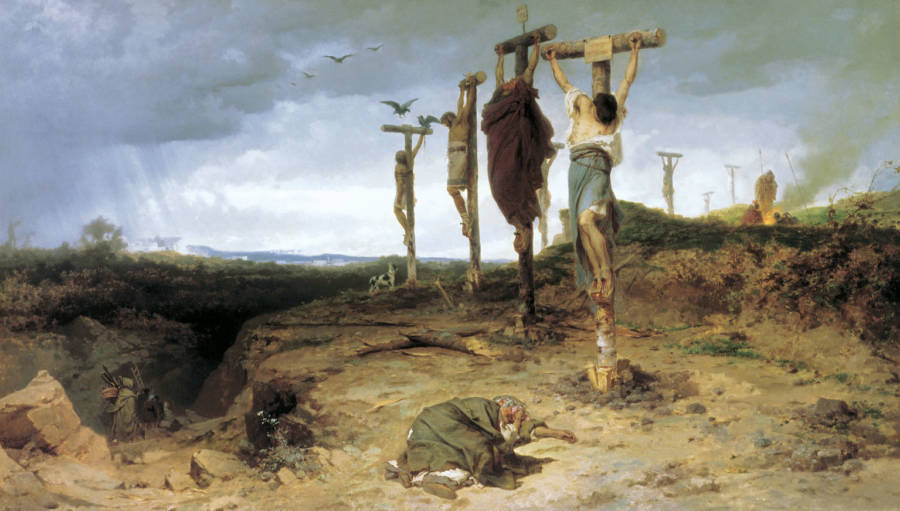 Wikimedia CommonsThe slaves who survived the war were crucified the Appian way as a gruesome warning.

Spartacus and the remainder of his army would finally be defeated by the army of Marcus Licinius Crassus in 71 B.C. Spartacus died “fighting most bravely in the front rank” and “the 6,000 slaves who survived were taken prisoner and crucified all the way along the road from Rome to Capua” to serve as a grim deterrent to any future rebellions.

After this look at Crixus, Spartacus’ right-hand, read about Queen Boudica and her revenge on the Romans. Then, check out some fascinating facts about ancient Rome.