27-year-old mixed martial artist Polyana Viana of Brazil subdued an attempted mugger — an unsurprising outcome considering she has a 10-2 record as a fighter.

While waiting for an Uber in front of her apartment in Rio de Janeiro this past Saturday, Viana reported that a man approached her.

On the left is @polyanaviana, one of our @UFC fighters and on the right is the guy who tried to rob her #badfuckingidea

“When he saw I saw him, he sat next to me,” Viana said. “He asked me the time, I said it, and I saw he wasn’t going to leave. So I already moved to put my cell phone in my waist. And then he said, ‘Give me the phone. Don’t try to react, because I’m armed.’ Then he put his hand over (a gun), but I realized it was too soft.”

Polyana Viana’s instinct proved correct as the gun was merely a cardboard cutout of one. 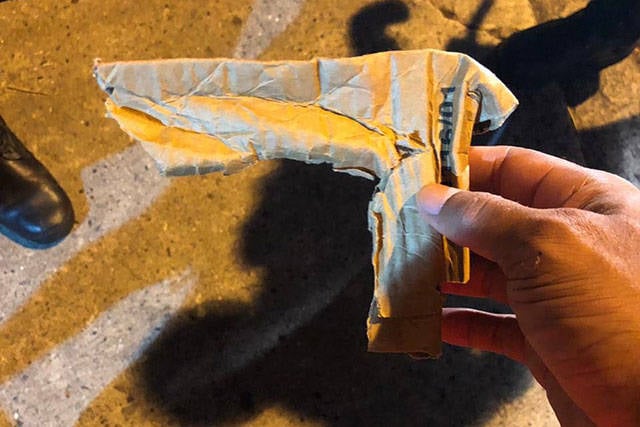 Polyana Viana The cardboard gun the would-be mugger threatened the MMA star with.

“He was really close to me. So I thought, ‘If it’s a gun, he won’t have time to draw it.’ So I stood up. I threw two punches and a kick. He fell, then I caught him in a rear-naked choke. Then I sat him down in the same place we were before and said, ‘Now we’ll wait for the police.'”

Someone wanted to steal the fighter Poliana Viana and this what happened to him. pic.twitter.com/Wsgnh6gQ2q

Ever the vigilant fighter, Viana kept the failed criminal’s arm immobilized in a kimura-like position until help arrived. While Viana filed a report with the police, the would-be mugger was brought to an emergency care facility before being sent to the prison, where he was actually recently released in an unrelated matter.

Viana admits that the area she was in is one she recognizes as dangerous, but the MMA star had been waiting close to the building because of this. But after fending off her attacker, the criminal actually wanted to be brought to the safety of the police.

Polyana Viana subdues an opponent in the ring.

Polyana Viana went home unscathed that evening and simply made herself dinner while the would-be mugger nursed his wounds.

This isn’t the first time Viana scared off a potential mugger. She was approached by two men on a motorcycle near her previous home and as with this instance, Viana successfully warded the men off by punching one of them square in the face.

“I think he was more scared than I was, so he jumped on the motorcycle and left.”

After learning about why it’s a bad idea to try to mug a professional MMA fighter, read up on subway mugging victim Bernhard Goetz, who turned into a murderous vigilante. Then, discover the grisly story of Omaima Nelson, the woman who killed and cooked her abusive husband.