How Dachau Concentration Camp Guards Got Their Comeuppance 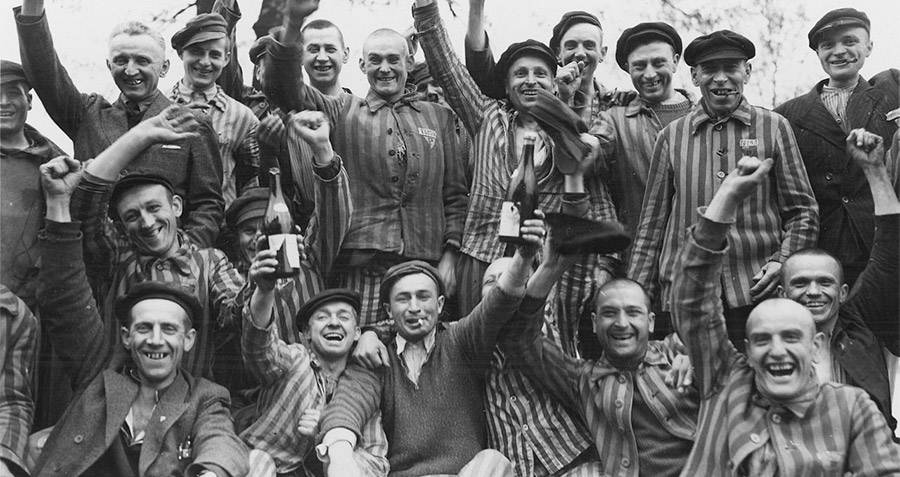 Wikimedia CommonsPolish prisoners in Dachau toast their liberation from the camp. 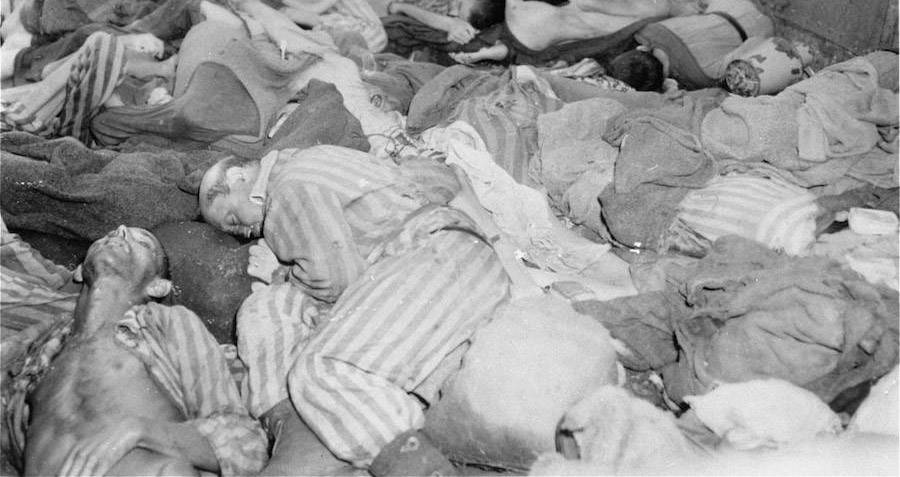 Wikimedia CommonsCorpses of prisoners in the Dachau death trains. 1945.

But it wasn’t just liberated. Reports indicated that, appalled by what they saw, members of the U.S army were driven to take revenge. They allegedly murdered the SS officers and guards who were responsible for the Holocaust horrors that took place at Dachau.

The troops arrived at the Dachau concentration camp in the afternoon. They were on their way to Munich which was just over ten miles from Dachau. Though the troops passed through Dachau, it wasn’t initially a part of the attack zones they were headed for. 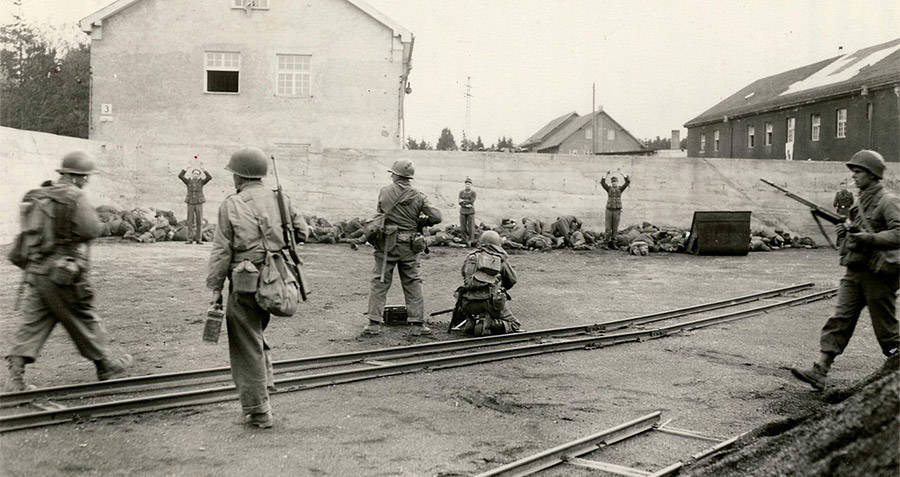 Wikimedia CommonsAmerican soldiers execute SS camp guards who have been lined up against a wall during the liberation of Dachau concentration camp.

There was a railway siding en route to the entrance of Dachau, along which there were 40 railway wagons. All of the wagons were filled entirely with emaciated human corpses. According to the U.S. Army, there were 2,310 dead bodies.

Nearby was the kiln of burning bodies. The stench of death permeated the air.

The actual events that took place after Dachau was liberated are shrouded in mystery. This can be attested to the fact that soldiers who were present during the liberation of the Dachau Concentration Camp recounted the events of the day in very different ways.

After word of American soldiers killing SS Guards at Dachau spread, an investigation was ordered by Lt. Col. Joseph Whitaker. The “Investigation of Alleged Mistreatment of German Guards at Dachau” as it was called produced documents that were marked “secret.” Soldiers spoke under sworn testimony and in the aftermath were inclined to speak little more of whatever happened at the Dachau Concentration Camp after it was liberated.

Felix L. Sparks was a general who wrote a personal account of the events.

General Sparks wrote that, despite more exaggerated claims, “the total number of German guards killed at Dachau during that day most certainly not exceed fifty, with thirty probably being a more accurate figure.” 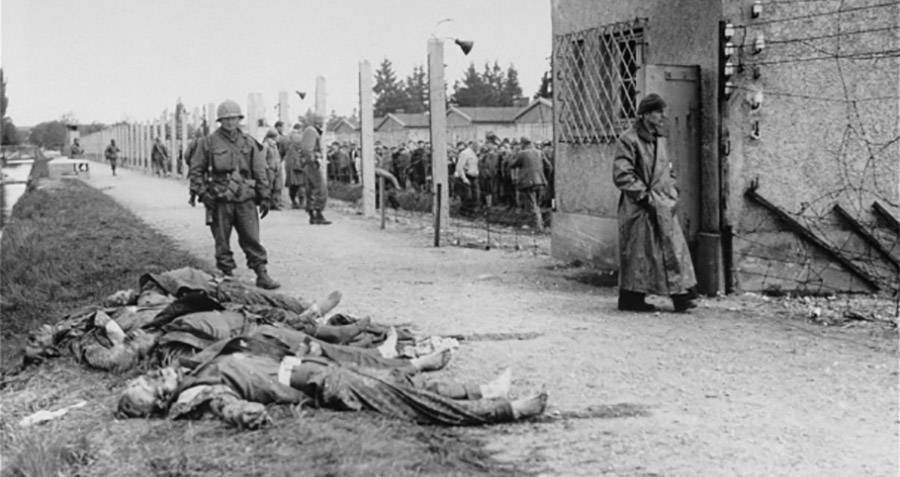 Wikimedia CommonsCloseup of the bodies of SS personnel lying at the base of the tower from which American soldiers had initially come under attack by a German machine gun.

Col. Howard A. Buechner was a medical officer with the 3rd Battalion for the 45th division and in 1986 he put out a book, The Hour of the Avenger. In his book, Buechner recounts his own version of what happened on April 29, 1945. Specifically the “deliberate killing of 520 Prisoners of War by American soldiers.” Buechner paints the picture of a mass execution in direct violation of the Geneva Convention.

In the book, Buechner’s states that there were only 19 American soldiers who witnessed the Dachau massacre, and at the time of the book’s publishing, only three were certain to be alive.

However, when reports from the initial investigation were made public in 1991, it came to light that Beuchner’s account did not match the sworn testimony he gave.

Another account of the day came from Abram Sachar, who in the book The Day of the Americans said:

“Some of the Nazis were rounded up and summarily executed along with the guard dogs. Two of the most notorious prison guards had been stripped naked before the Americans arrived to prevent them from slipping away unnoticed. They, too, were cut down.”

It wasn’t just the American soldiers who reportedly took revenge on the SS guards. It was the inmates too.

One of the prisoners, Walenty Lenarczyk, said that immediately following the liberation the prisoners gained a newfound sense of courage. They caught the SS men “and knocked them down and nobody could see whether they were stomped or what, but they were killed.” As Lenarczyk put it, “We were, all these years, animals to them and it was our birthday.”

Like stories from many wars, it may never be made entirely clear what transpired after Dachau was liberated. 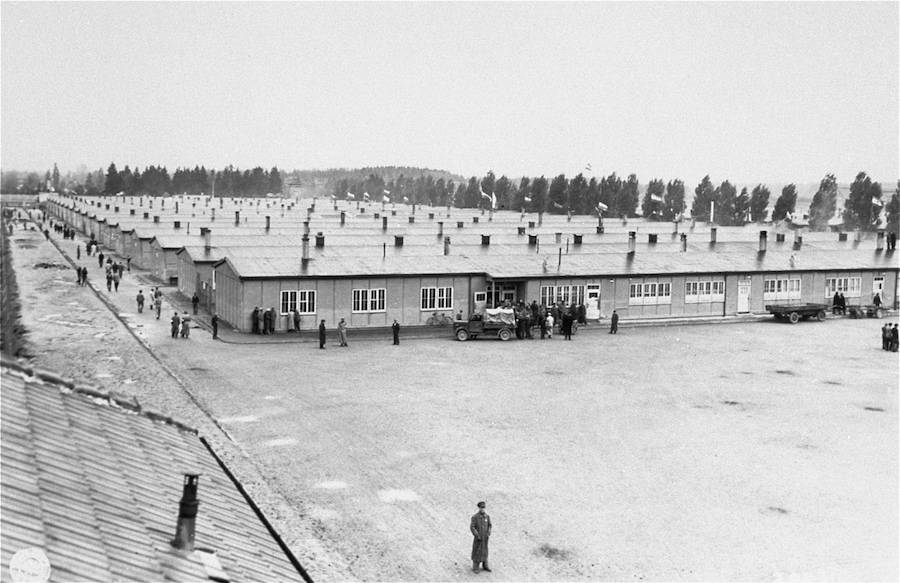 Due to the extensive records kept by the Nazis during the Holocaust, there is a great deal of public knowledge available on the Dachau Concentration Camp itself.

We know that it was divided into two sections: the camp area made up of 32 barracks and the crematoria area.

The records show that there were extensive medical experiments done on prisoners at Dachau, which included tests for halting excessive bleeding, and high-altitude experiments using a decompression chamber.

A few days before the liberation, 7,000 prisons were ordered on a death march from Dachau to Tegernsee. Anyone who couldn’t keep up was shot by German soldiers. Many perished from exhaustion and hunger along the way.

Between 1933 and 1945, there were over 188,000 prisoners at Dachau. A number of unregistered prisoners were there as well though, thus the total number of prisoners and victims who died will likely remain unknown.

30,000 prisoners were liberated. Jack Goldman was liberated at Dachau and became a U.S. Veteran of the Korean War. His father was killed in Auschwitz.

Goldman reflected on the Dachau liberation, the subsequent events that transpired, and the idea of vengeance. Though he doesn’t preach hatred, he understood the feelings of those prisoners.

One vivid memory Goldman recalled from the liberation was the American troops taking their names. He said, “For the first time, we were no longer numbers.”

After learning of the Dachau massacre following its liberation, you may want to read about the database that puts human faces to the guards at Auschwitz. Then take a look at heartbreaking photos inside the only all-female concentration camp.