Dakotaraptor, the new dinosaur species discovered in South Dakota, is a far larger relative of the Velociraptor.

A new species of raptor was found in South Dakota this week, and it’s one of the biggest ones yet. The Dakotaraptor, aptly named after the state of its discovery, was 16 feet long with nearly 10-inch claws. 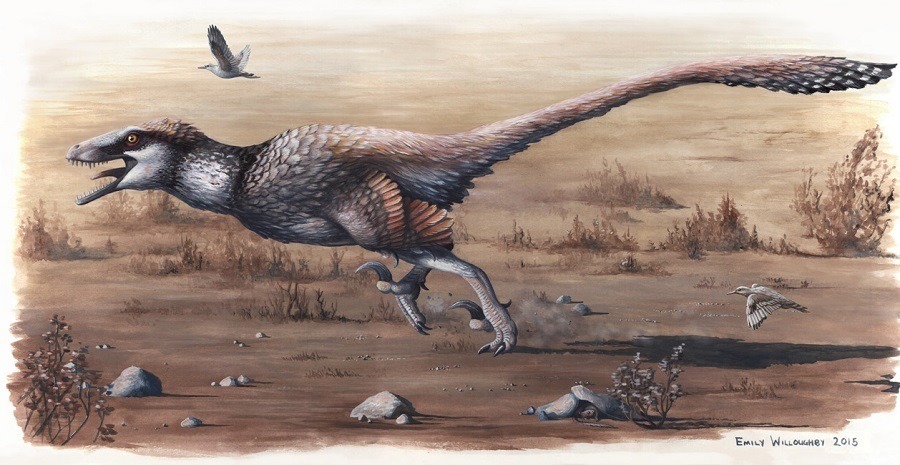 An artist rendering of what the Dakotaraptor may have looked like.

The fossils date back to the Cretaceous period around 66 million years ago, the era that saw the emergence of some of the most well-known dinosaurs, including the Triceratops, the Pteranodon and, of course, the Tyrannosaurus Rex. The discovery was made in the aptly named Hell Creek, S.D., the same location that the T. Rex is known to have roamed.

So how does this new find stack up against the more famous Velociraptor? Despite what you’ve seen in the movies, this new dinosaur is a far more intimidating beast.

It’s long been known that Dromaeosaurids (raptors) are close relatives to birds, and the Dakotaraptor is further proof of this: Its forearm bones have quill knobs on them, proving that it had both feathers and wings, although it was too big to actually fly.

There are two schools of thought on its wings, with one claiming the dinosaur was a ferocious predator with evolutionarily useless wings like ostriches, and the other suggesting that the feathers were used for egg brooding and attracting mates.

Questions about where the Dakotaraptor fits into the overall food chain of the Cretaceous period haven’t yet been answered. It was previously thought that the T. Rex filled every possible predatory niche without giving other large predators a chance, but the Dakotaraptor likely avoided direct competition with the long-game style hunting of the T. Rex.

Like the Velociraptors of the movies, the Dakotaraptor was a perfect killing machine that ambushed its prey, striking quickly and efficiently. “Clever girls,” indeed.