The Controversial Story Of David Ferrie, The Little-Known Man Who May Have Helped Assassinate President Kennedy

David Ferrie was a rabid anti-communist who allegedly knew Lee Harvey Oswald and had shadowy connections to the CIA, which has led some to speculate that he conspired to kill JFK. 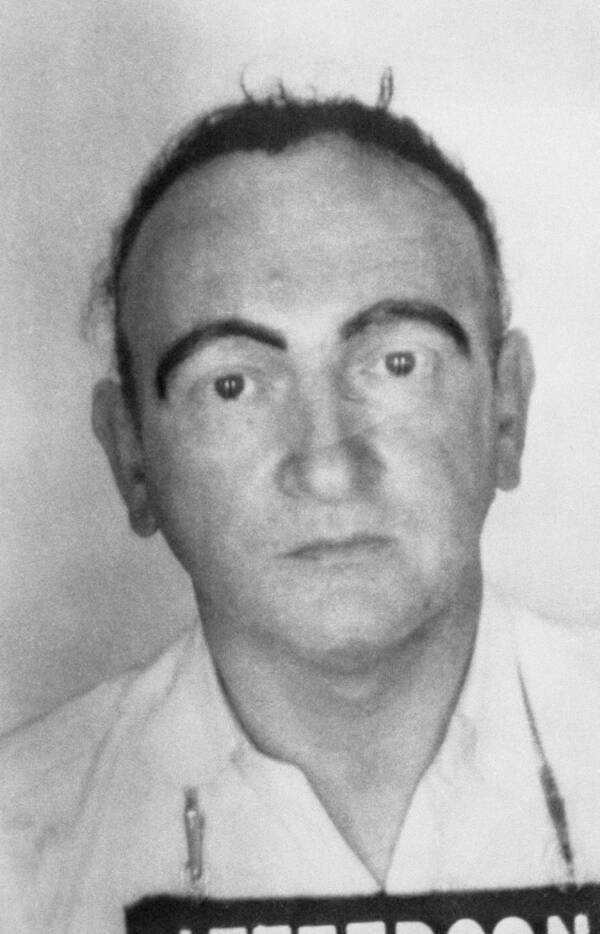 For most of his life, David Ferrie struck those who knew him as an oddball. Bouncing from job to job, attempting to conceal his alopecia with a wig and fake eyebrows, Ferrie didn’t accomplish much by the time he died at the age of 47. But some believe that there was more to Ferrie than met the eye — and that he helped assassinate John F. Kennedy in 1963.

Described as “brilliant,” a “paradox,” and a “psycho,” by those who crossed his path, Ferrie held deeply anti-communistic views and spoke publicly about his disdain for Kennedy. He was questioned by the FBI just days after the president’s assassination and was publicly listed as a suspect in 1967.

Though Ferrie always denied his involvement in the assassination or that he knew Oswald, some evidence does link the two men. Compellingly, investigators dug up a photo that showed both men at a cookout in 1955 and some have claimed that Ferrie and Oswald were acquaintances.

But that’s not the only reason why some think that David Ferrie helped kill President John F. Kennedy in November 1963.

Born on March 28, 1918, David William Ferrie lived an unusual life, much of it documented by the House Select Committee on Assassinations (HSCA) in the 1970s. According to their investigation, Ferrie originally aspired to become a priest but left seminary school because of “emotional instability.” 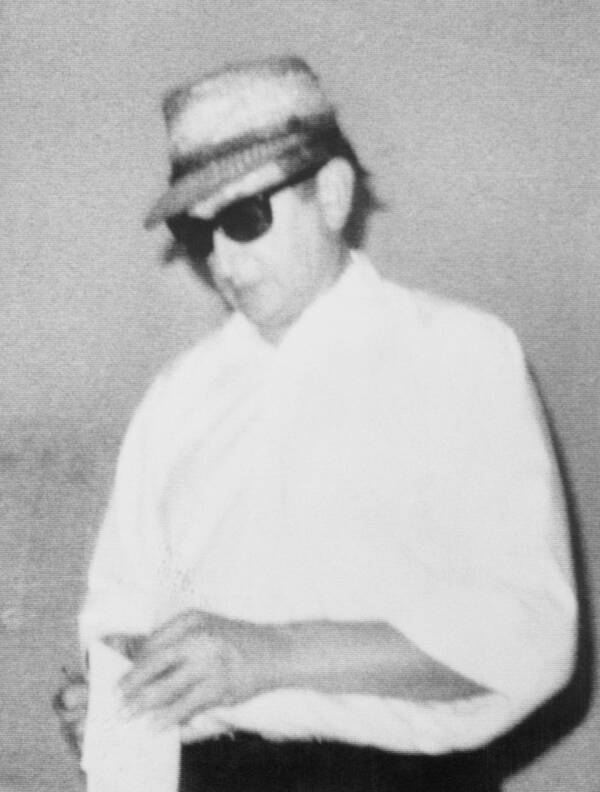 Bettmann/Getty ImagesDavid Ferrie wearing sunglasses and hat in 1967, shortly before his death.

From there, Ferrie bounced from job to job. He trained as a pilot at his father’s suggestion and briefly found work as a pilot for an oil company.

When the company went out of business, Ferrie worked as a high school teacher, but was fired after allegedly “psychoanalyzing” his students instead of teaching them. Shortly thereafter, around 1949, Ferrie left the Cleveland area once rumors spread that he’d taken several young boys to a brothel.

A gay man, and allegedly a misogynist, Ferrie also made no secret of his political views. He was adamantly against communism and frequently stated that he didn’t think that the United States had done enough to stem its tide. The HSCA found he’d publicly disparaged Presidents Roosevelt, Truman, and Kennedy for not doing enough to fight it.

“He apparently expressed his views to anyone who would listen,” the HSCA found. “During an interview with an IRS auditor in 1960, Ferrie was ‘outspoken’ in his derogatory comments about the United States. He complained bitterly about his alleged tax persecution to such an extent that the agent reported he thought Ferrie was actually deranged, a ‘psycho.'”

Indeed, David Ferrie established a reputation in adulthood as a bizarre and angry man — an impression reinforced by his “makeshift toupee” and “exaggerated eyebrows,” which Ferrie used to try to conceal his alopecia.

The HSCA described him as “complex, even bizarre,” and one of Ferrie’s associates characterized him as “a paradox.” Others remembered Ferrie as “very aggressive,” “highly obnoxious,” and difficult to get along with, though the HSCA also stated that Ferrie was “highly intelligent, even brilliant.”

Ferrie’s love for flying brought him some stability. He found work at Eastern Airlines in the 1950s — by falsifying information on his application — and volunteered with the Civil Air Patrol. Working in New Orleans, Ferrie established a reputation as a hands-on instructor and a “good organizer.”

Behind the scenes, Ferrie continued to support the fight against communism. The HSCA found that Ferrie worked with anti-Castro Cuban revolutionaries and that he possibly offered financial assistance, flying lessons, and weapons smuggling.

Ferrie even took a vacation in 1961 that the HSCA found “coincided with the Bay of Pigs” though their report acknowledged that “Ferrie’s role, if any, is not known.”

David Ferrie was certainly a strange character — but did he actually help assassinate President John F. Kennedy in November 1963? 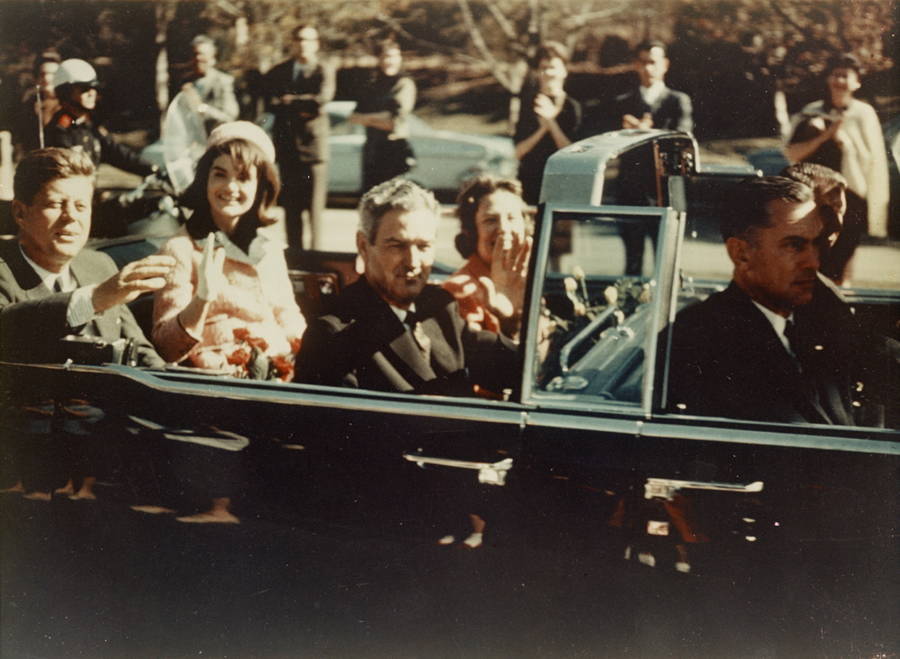 National Archives and Records AdministrationPresident John F. Kennedy with his wife, alongside Texas governor John Connally and his wife, shortly before Kennedy was shot.

On Nov. 22, 1963, an assassin shot and killed President John F. Kennedy in Dallas, Texas. That day, Lee Harvey Oswald was arrested and soon charged with assassinating the 46-year-old president. But in New Orleans, a different investigation was unfolding.

There, according to the HSCA, a private investigator named Jack Martin contacted police and told them that David Ferrie might have had something to do with the assassination.

Martin, who knew Ferrie through another private investigator named Guy Bannister, alleged that Ferrie had been in Texas during the assassination, that he was meant to serve as a getaway pilot, and that he’d known Lee Harvey Oswald from their time in the Civil Air Patrol.

According to Fox 10 News, the FBI questioned Ferrie just five days after the JFK assassination. And Ferrie gave some eyebrow-raising answers.

When asked about John F. Kennedy, Ferrie admitted that he was angry about the president’s failure to support Cuban rebels during the Bay of Pigs and acknowledged that he “might have used an off-hand or colloquial expression ‘He ought to be shot.'”

Ferrie also admitted that he’d discussed the president’s use of convertible cars with others and that he’d even said that “anyone could hide in the bushes and shoot a president.”

However, Ferrie denied that he’d had anything to do with the assassination or that he’d ever known Lee Harvey Oswald. A cache of documents about Ferrie from the National Archives states that Ferrie was “positive” that he’d been in New Orleans on Nov. 22, though he’d gone to Texas that weekend.

The FBI released Ferrie because his story seemed to check out. A source later told the Saturday Evening Post that “The FBI squeezed Ferrie dry, found nothing there and discarded him.”

But that wasn’t enough for New Orleans District Attorney Jim Garrison. As depicted in the 1991 film JFK, Garrison opened his own investigation into the Kennedy assassination in 1967. According to Garrison’s obituary in The New York Times, he declared that he’d “solved the assassination” and that Lee Harvey Oswald had “never fired a shot.”

Garrison’s investigation into the assassination focused on a number of anti-communists in New Orleans, including David Ferrie. 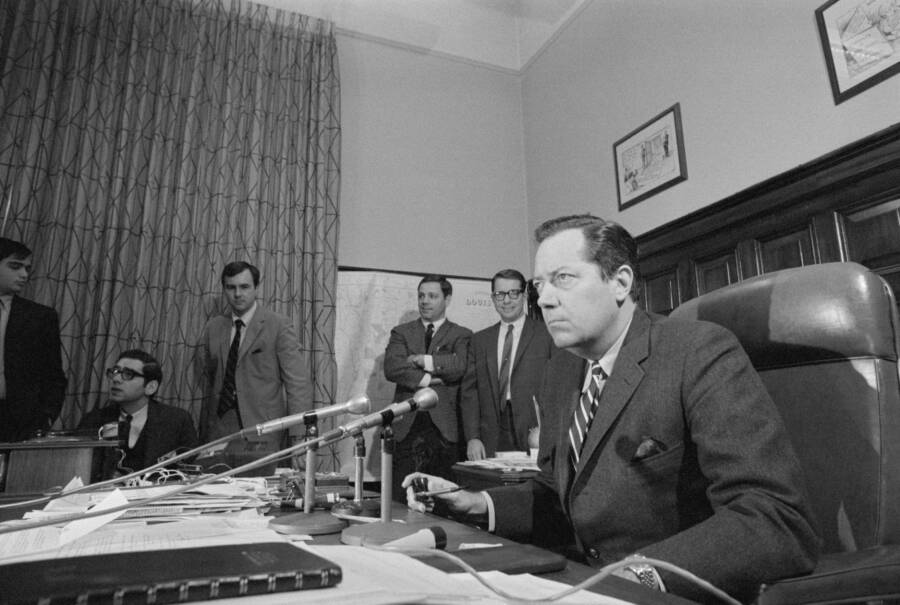 Bettmann/Getty ImagesJim Garrison conducted his own investigation into the JFK assassination and David Ferrie, though it eventually went nowhere.

“We discovered a whole mare’s-nest of underground activity involving the CIA, elements of the paramilitary right and militant anti-Castro exile groups,” Garrison told Playboy. “We discovered links between David Ferrie, Lee Oswald and Jack Ruby [who shot and killed Oswald in 1963].”

Garrison added: “We discovered, in short, what I had hoped not to find… the existence of a well-organized conspiracy to assassinate John Kennedy, a conspiracy that came to fruition in Dallas on November 22, 1963, and in which David Ferrie played a vital role.”

But David Ferrie died on Feb. 22, 1967, just days before Garrison planned to arrest him. As The New York Times reported at the time, an autopsy found that Ferrie had died of a berry aneurysm, or a ruptured brain vessel, though investigators also found apparent suicide notes nearby.

“I suppose it could just be a weird coincidence that the night Ferrie penned two suicide notes, he died of natural causes,” Garrison told Playboy.

He went on to prosecute New Orleans businessman Clay Shaw as a possible conspirator, but The New York Times writes that Shaw’s month-long trial was a “circus.” Shaw was acquitted by the jury after less than an hour.

From there, David Ferrie largely faded from the collective memory — until PBS discovered a photograph of him with Lee Harvey Oswald in 1993.

The Final Piece Of Evidence Against David Ferrie 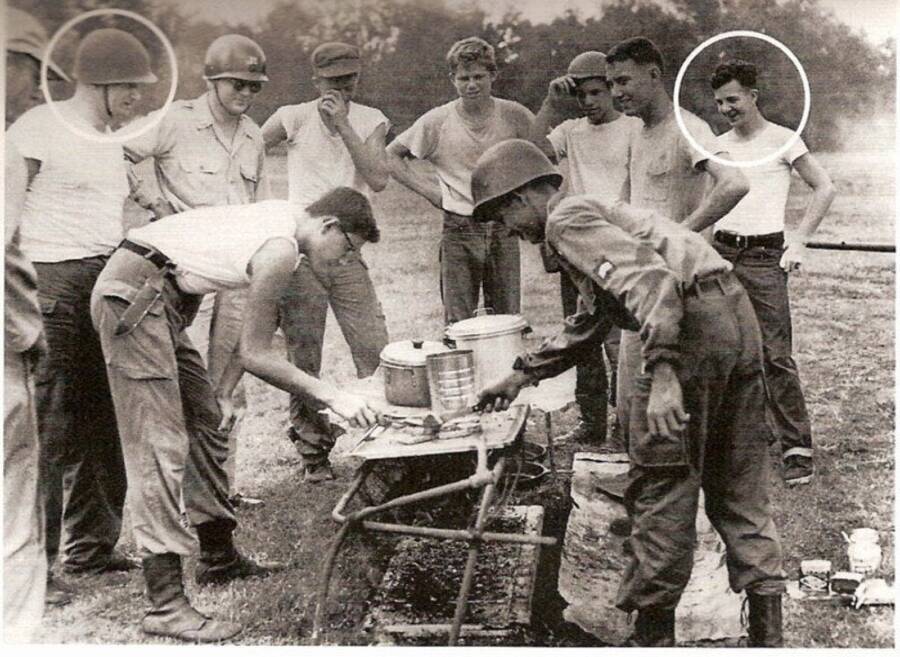 Two years after JFK (1991) thrust the Kennedy assassination back into the spotlight, PBS announced that they’d acquired a photo that showed Ferrie with Lee Harvey Oswald. Sure enough, the photo provided by CAP member John B. Ciravolo, Jr. showed Ferrie and Oswald at a CAP cookout in 1955.

The photographer Chuck Frances claimed he’d told the FBI that Ferrie and Oswald knew each other, though he hadn’t mentioned the photograph. Ciravolo additionally told Fox 10 News that he and other teenagers worshipped Ferrie for his engaging teaching style, and that it wouldn’t be a surprise if Oswald had attended one of Ferrie’s parties.

Yet others cautioned that appearing in a photograph together didn’t mean that Ferrie and Oswald had known each other.

“I never heard David Ferrie mention Lee Harvey Oswald,” Layton Martens, a CAP cadet and a friend of Ferrie’s, told PBS. Shown the photograph, he recognized Ferrie but insisted that it didn’t prove that Ferrie and Oswald had had any kind of relationship outside of the cookout.

“It does indicate the possibility of an association,” Martens admitted to PBS, “but if and to what extent is another question.”

After reading about David Ferrie and why some think he helped assassinate John F. Kennedy, discover the unknown story of Marina Oswald Porter, Lee Harvey Oswald’s wife. Or, delve into the mystery of JFK’s brain, which has been missing for decades.