Although Marina Oswald Porter testified against Lee Harvey Oswald after the assassination of John F. Kennedy in 1963, she later asserted that her husband was an innocent scapegoat. 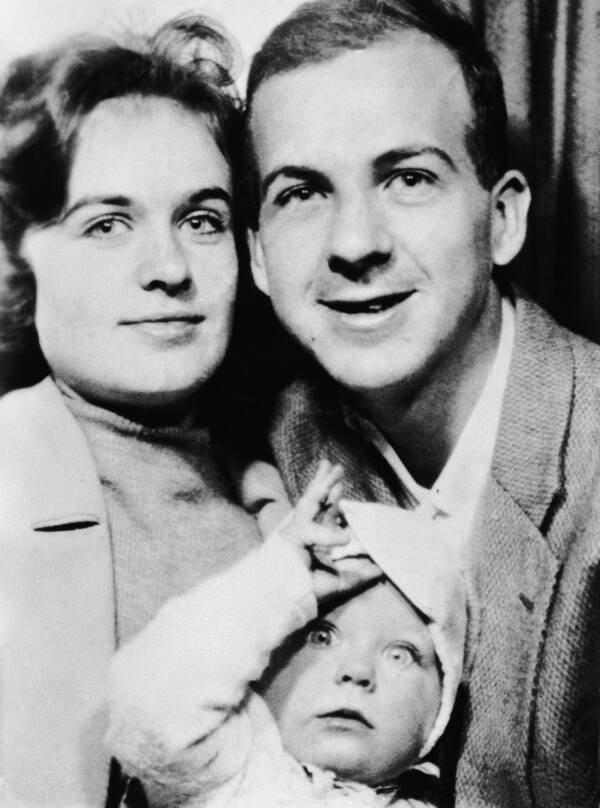 Marina Oswald Porter became Lee Harvey Oswald’s wife after they married in 1961 in the Soviet Union. The following year, the young couple moved to Texas. And in 1963, just weeks after welcoming their second child, Marina’s husband shot the president.

The assassination created a firestorm with Marina Oswald Porter at the center. And although she testified before Congress, Oswald Porter later questioned whether her husband was truly guilty.

But after a brief time in the spotlight following the assassination of John F. Kennedy, Marina Oswald remarried and moved to a rural suburb of Dallas, taking the last name of her new husband, Kenneth Porter. And there she has stayed for the past seven decades — wishing never to have to relive the events of Nov. 22, 1963.

Born Marina Nikolayevna Prusakova on July 17, 1941, in the Soviet Union during the darkest days of World War II, Marina Oswald Porter moved to Minsk as a teenager in 1957. There, she studied to work in a pharmacy. A few years later, in March 1961, she met Lee Harvey Oswald at a dance.

That encounter would change her life.

Lee Harvey Oswald was an American Marine who defected to the Soviet Union because he supported communism. The pair hit it off immediately, marrying only six weeks later. 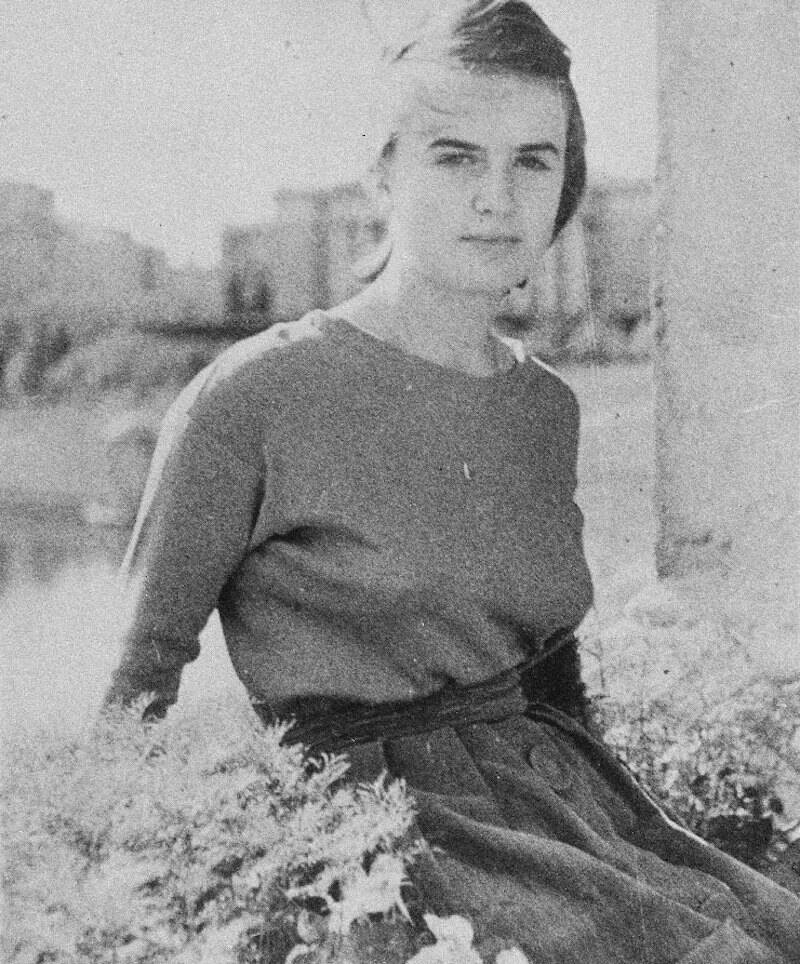 In February 1962, Marina gave birth to a daughter named June. Four months later, the young Oswald family moved back to the United States, where they lived in Fort Worth, Texas.

Early in their relationship, Lee Harvey Oswald’s wife realized he had a dark side.

In April 1963, Oswald told his wife that he had tried to kill Maj. Gen. Edwin Walker, a stark anti-communist and a white supremacist. “He said that he just tried to shoot General Walker,” Marina Oswald Porter later testified before the House of Representatives. “I asked him who General Walker was. I mean, how dare you go and claim somebody’s life?”

In response, Oswald shot back, “Well, what would you say if somebody got rid of Hitler at the right time? So if you don’t know about General Walker, how can you speak up on his behalf?”

Later that month, the Oswalds moved from Fort Worth to New Orleans before returning to Texas and moving to the Dallas area that fall. On Oct. 20, 1963, Marina gave birth to a second daughter. Five weeks later, her husband murdered the president.

The Assassination Of John F. Kennedy

On Nov. 22, 1963, Lee Harvey Oswald went to his job at the Texas School Book Depository. But that day was different. That day he brought a rifle to work — one that he’d stored at the house where Marina Oswald Porter was staying while he rented a room in a Dallas boarding house to be closer to work.

The presidential motorcade was scheduled to pass by the depository that afternoon. And at 12:30 p.m., the crack of gunfire broke the air. John F. Kennedy slumped in his limousine. As the Secret Service surrounded the president, the car sped off to the hospital.

Immediately, witnesses pointed to two locations: the grassy knoll and the book depository. Police searched the depository and found three cartridge cases next to a window on the sixth floor. Nearby, they discovered a rifle. 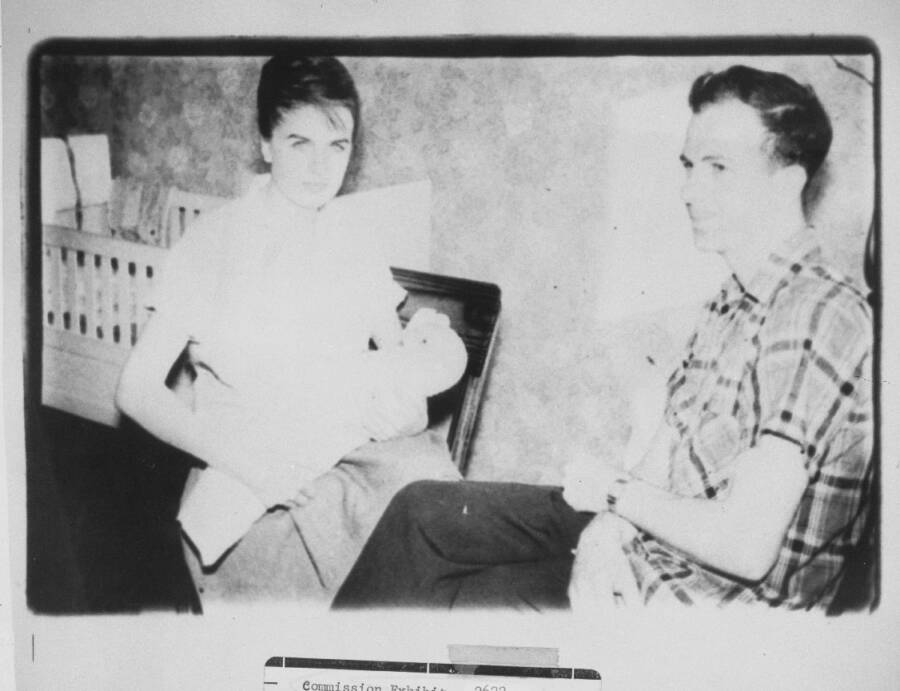 Minutes after the shooting, witnesses saw Oswald leave the book depository, according to the Warren Commission report. Oswald fled after a short stop at his apartment, where he picked up a .38 revolver. Less than an hour after the shooting, a Dallas police officer approached Oswald. Terrified, Oswald shot the officer before fleeing the scene.

Oswald then slipped into a movie theater to hide, but he was quickly spotted. The police arrived and arrested Oswald after a brief struggle.

All the early evidence from the Kennedy assassination pointed to Oswald. His prints were on the rifle and the book cartons near the window. Witnesses saw Oswald before and after the shooting in the book depository. Oswald had false paperwork that matched the name registered to the rifle. Post office records showed that the rifle had been sent to a P.O. box owned by Oswald.

Police interrogated Oswald, but he never made it to trial — Jack Ruby shot and killed Oswald during a police transfer two days later.

Oswald Porter told the authorities everything she knew – which wasn’t much. Still, her testimony convinced the Warren Commission that Oswald acted alone. 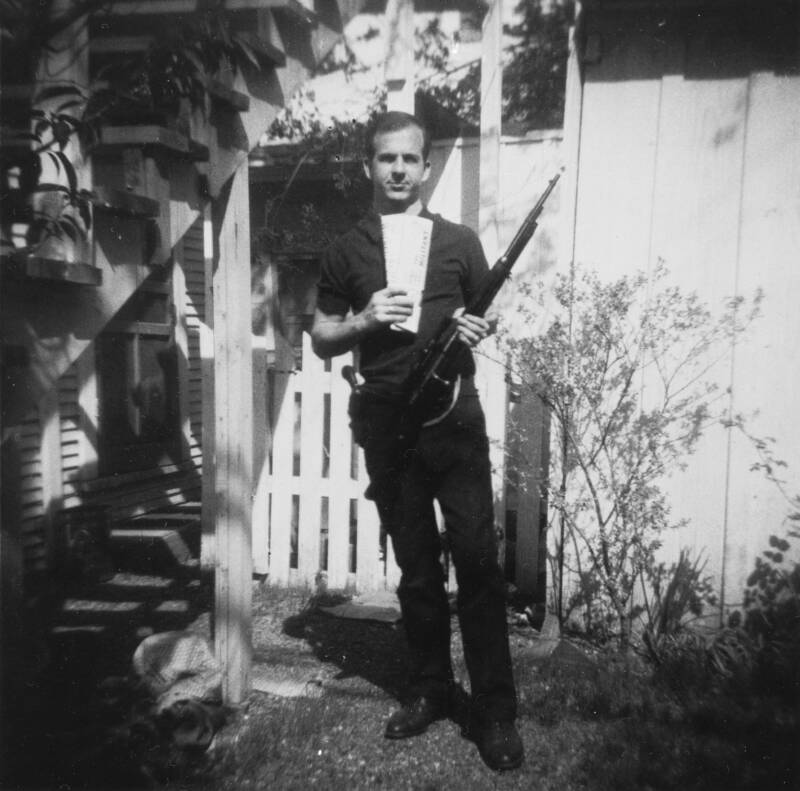 In the aftermath of the assassination, Marina Oswald Porter, who was just 22, found herself with a toddler and an infant. After her husband’s assassination, newspapers ran the headline, “Now she’s a widow, too.”

“What is America going to do about it?” wrote editors at one paper. “Are we going to vilify and harass her for what her husband was accused of doing? Or are we going to provide help simply because here is a human being in trouble who desperately needs help?”

Donations poured in for the widow. She received $70,000 in donations and an offer to study at the University of Michigan.

But Oswald Porter could not take up the offer immediately. The FBI, the Secret Service, and the Warren Commission interviewed her. In 1965, Oswald Porter moved to Michigan to begin an eight-week English program.

However, not everyone welcomed the widow. “Send her back to Texas and if she felt any sorrow at all for the horrible thing her husband did to Jackie and all of the decent citizens of the United States, she would go back to Russia (where she belongs),” wrote an angry Michigander. “Please get her away from Michigan. In my book she belongs where her husband is. Where is your respect for President Kennedy?”

In 1965, the wife of Lee Harvey Oswald married a carpenter named Kenneth Porter and moved to Richardson, Texas.

Marina Oswald Porter Has Doubts About Her Husband’s Guilt

In 1977, Marina Oswald Porter published a book about her marriage with Lee Harvey Oswald. “My regret through the years has… been immense,” Oswald Porter said during an interview. “I can never forget or forgive what he did, to me and to my children, to the president and his family, to the whole world.” 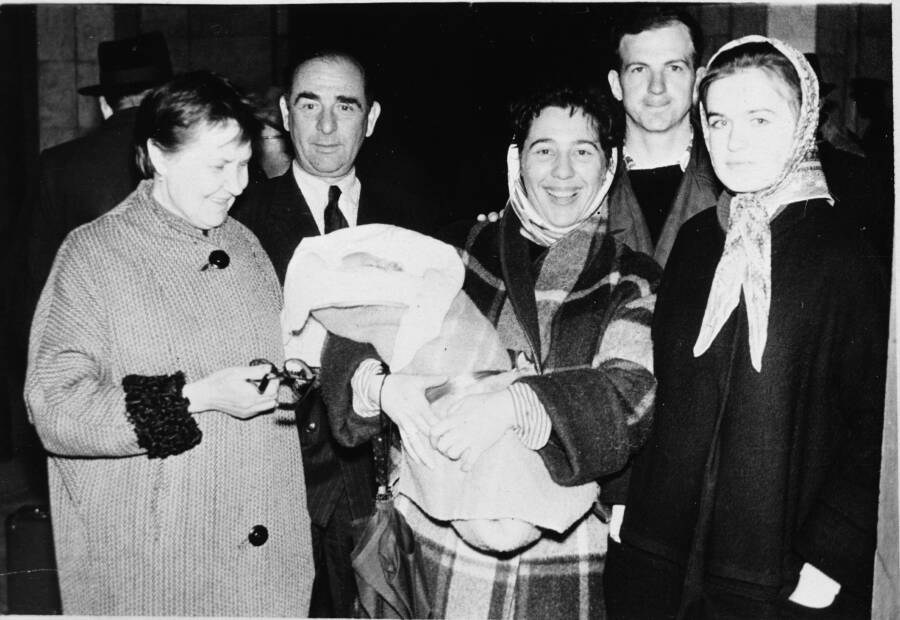 U.S. National ArchivesThe Oswalds pose with the Zieger family and baby June in 1962.

But over time, Oswald Porter began to doubt the official account.

“When I was questioned by the Warren Commission, I was a blind kitten,” Marina Oswald Porter said in a 1988 interview with Ladies Home Journal. “Their questioning left me only one way to go: guilty. I made Lee guilty. He never had a fair chance. I have that on my conscience. I buried all his chances by my statements. I drummed him.”

And by the mid-1990s, she’d become convinced that he was not the man who pulled the trigger. Speaking again with Ladies Home Journal, according to Deseret News, she said, “I’m not saying that Lee is innocent, that he didn’t know about the conspiracy or was not a part of it, but I am saying he’s not necessarily guilty of murder. I think Lee was killed to keep his mouth shut.”

In 1996, Oswald Porter declared, “At the time of the assassination of this great president whom I loved, I was misled by the ‘evidence’ presented to me by government authorities and I assisted in the conviction of Lee Harvey Oswald as the assassin,” according to The Independent.

“From the new information now available, I am now convinced that he was an FBI informant and believe that he did not kill President Kennedy.”

Marina Oswald Porter had a front-row seat to a presidential assassination. Next, read about Secret Service Agent Clint Hill, who almost saved Kennedy, and then learn about the magic bullet theory.