The Disturbing Unsolved Case Of The ‘Freeway Phantom’ Murders

From 1971 to 1972, a serial killer known only as the "Freeway Phantom” stalked Washington, D.C., abducting and murdering six young Black girls. 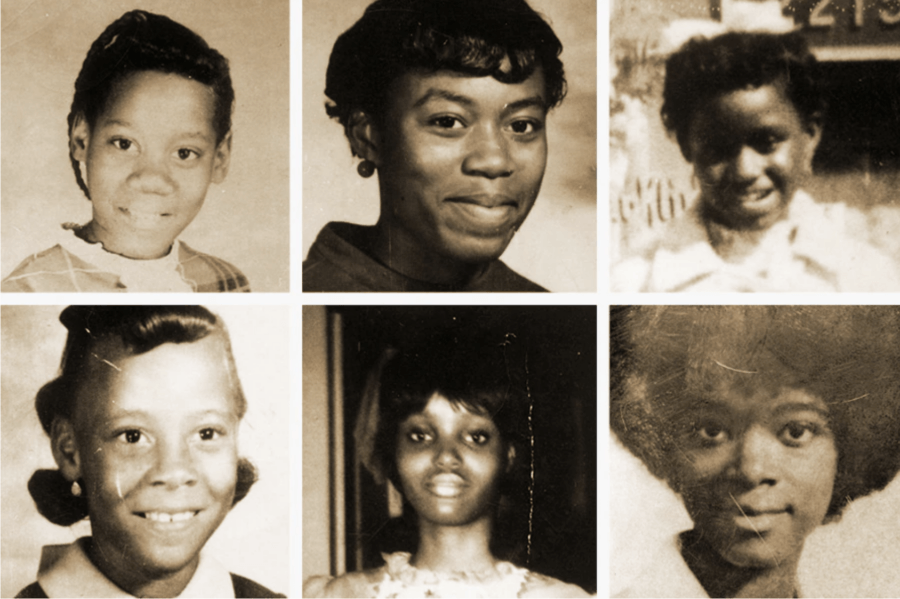 In 1971, a serial killer struck in Washington, D.C., for the first time in known historu. Over the next 17 months, the so-called “Freeway Phantom” kidnapped and murdered six Black girls between the ages of 10 and 18.

It took four murders for police to realize the cases were connected. And as he killed without consequences, the Phantom only grew bolder and more vicious.

After kidnapping his fourth victim, the serial killer made her call her family. And a note in the pocket of the fifth victim taunted the police: “Catch me if you can!”

Who was the Freeway Phantom? Decades later, the case remains chillingly unsolved.

By 1971, serial killers had made headlines in New York and California. But that year, Washington, D.C., experienced its first serial murders.

In April, Carol Spinks walked to the local 7-Eleven with $5 in her pocket. The 13-year-old had been sent by her older sister to buy TV dinners.

Spinks reached the 7-Eleven, made her purchases, and set off for home. But she vanished during the four-block walk.

Police found Spinks’ body six days later. She had been sexually assaulted and strangled — and police believe the killer had kept the girl alive for several days before murdering her.

Spinks left behind an identical twin, Carolyn. “It was terrible,” Carolyn Spinks recalled of the days after her sister’s murder. “I couldn’t get it together. I thought I was losing my mind.”

However, Carol Spinks’ shocking death was only the first in a series of murders.

Two months later, police received a call about a second body in the same spot – an embankment next to the I-295 freeway. 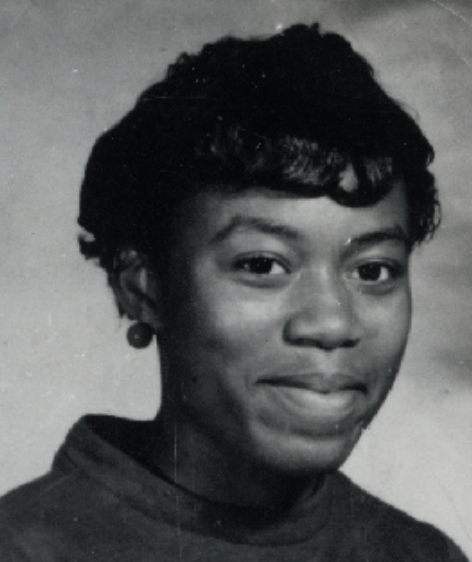 Metropolitan Police DepartmentDarlenia Johnson was the second victim of the Freeway Phantom.

The third victim’s body appeared just nine days later. And the serial killer known as the Freeway Phantom had become bolder. This time, he made his victim call home before he killed her.

A Note From The ‘Freeway Phantom’

Brenda Faye Crockett was just 10 years old when she went missing. In July 1971, Crockett’s mother sent her to the local grocery store for bread and dog food. But Brenda never came home.

About an hour later, the phone rang at the Crockett house. Brenda’s mother had left to look for her missing daughter, so Brenda’s 7-year-old sister Bertha answered the phone.

Brenda told her sister that she was in Virginia and that a white man had “snatched” her up. But Brenda said that her kidnapper had called a taxi to send her home.

A half-hour later, Brenda called a second time. “Did my mother see me?” she asked. Then, after a pause, she whispered, “Well, I’ll see you.” The phone went dead. Police found Brenda Crockett’s body the next morning.

And the murders continued. In October 1971, 12-year-old Nenomoshia Yates disappeared on the way home from the grocery store. Just two hours later, a teenager found her body. It was still warm.

With four young girls dead, D.C. police finally admitted that a serial killer was behind the murders.

The fifth victim went missing six weeks later. While on the way home from a local high school, 18-year-old Brenda Woodard went missing. Police found her body the next morning. And they discovered a clue that would leave detectives baffled.

The killer had left a note in Woodard’s pocket. 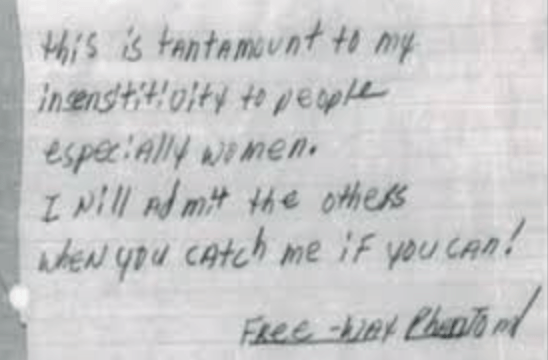 Metropolitan Police DepartmentThe letter left by the Freeway Phantom in the pocket of his fifth victim.

“This is tantamount to my insensitivity to people especially women. I will admit the others when you catch me if you can!”

The note was signed “Freeway Phantom.”

The killer had apparently dictated the note to Woodard before strangling her, as it was scrawled in her handwriting.

Suspects in the Freeway Phantom Killings

After Woodard’s death, the Freeway Phantom seemed to vanish. Months went by without another murder. Until ten months later, when police found the body of 17-year-old Diane Williams on the side of the freeway.

Emboldened, the Freeway Phantom called Williams’s parents and told them, “I killed your daughter.” 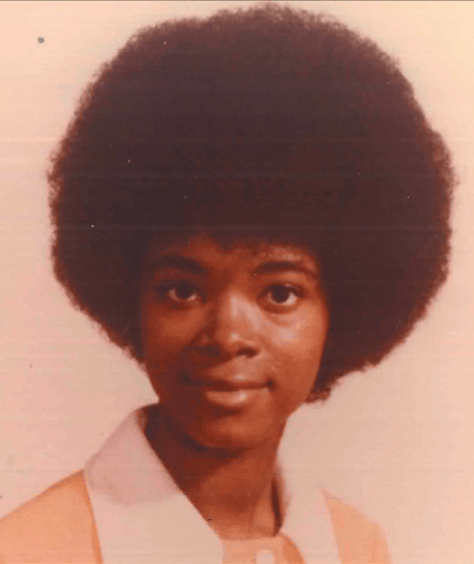 Metropolitan Police DepartmentDiane Williams was the last known victim of the Freeway Phantom.

With local police at a dead end, the FBI took over the case in 1974. And they settled on a suspect. Robert Askins has already served time for killing a sex worker. A warrant turned up suspicious items in Askins’ house, including photos of girls and a knife tied to a different crime.

But none of the evidence linked Askins with the six victims of the Freeway Phantom. A jury eventually sent Askins to prison for life after he kidnapped and raped two other women.

Why The ‘Freeway Phantom’ Remains Unidentified

“Maybe it’s over there in some box and we haven’t stumbled across it,” said Detective Jim Trainum. “Who knows?”

Detectives continued to investigate, attempting to rebuild the files. And the $150,000 reward for information in the case remains unclaimed. 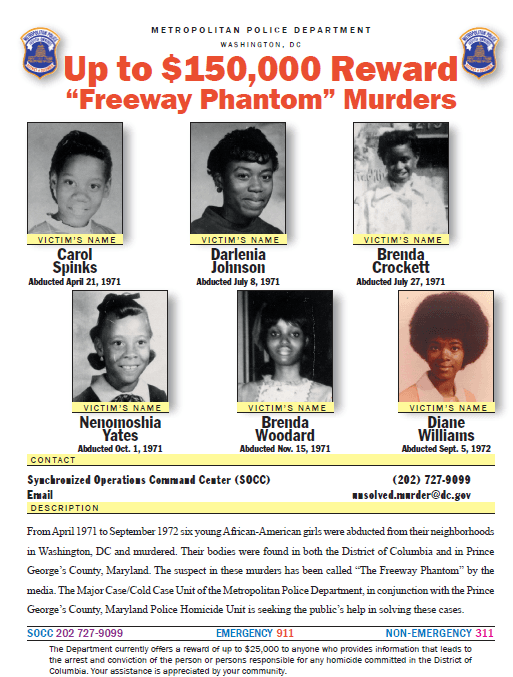 Metropolitan Police DepartmentThe reward poster promises $150,000 for information leading to the arrest of the Freeway Phantom.

“We were devastated,” said Wilma Harper, the aunt of Diane Williams. “At first it didn’t register in my head that she was really dead, but the reality soon hit home.”

Harper founded The Freeway Phantom Organization to support the friends and family members of murder victims. The families of the six girls also supported each other.

“At first, I couldn’t talk to anyone or even look at pictures,” Mary Woodard, the mother of Brenda, said. “People say they know what you’re going through but unless you’ve actually experienced the tragedy, you really don’t know. Sharing with someone who’s gone through the same thing helped me to deal better.”

“It’s a two-way street,” Harper said in a 1987 interview. “The police can’t do it all by themselves. Members of the community have to consider it important enough to get involved and see that these murders are put to a stop.”

The Freeway Phantom case remains open – and there’s still a $150,000 reward in the case. Next, read about other cold cases that continue to baffle detectives. Then learn about the Chicago Strangler, who may have killed 50 people.