Scout, who's now maybe the most expensive golden retriever alive, will star in the 30-second ad titled 'Lucky Dog.' 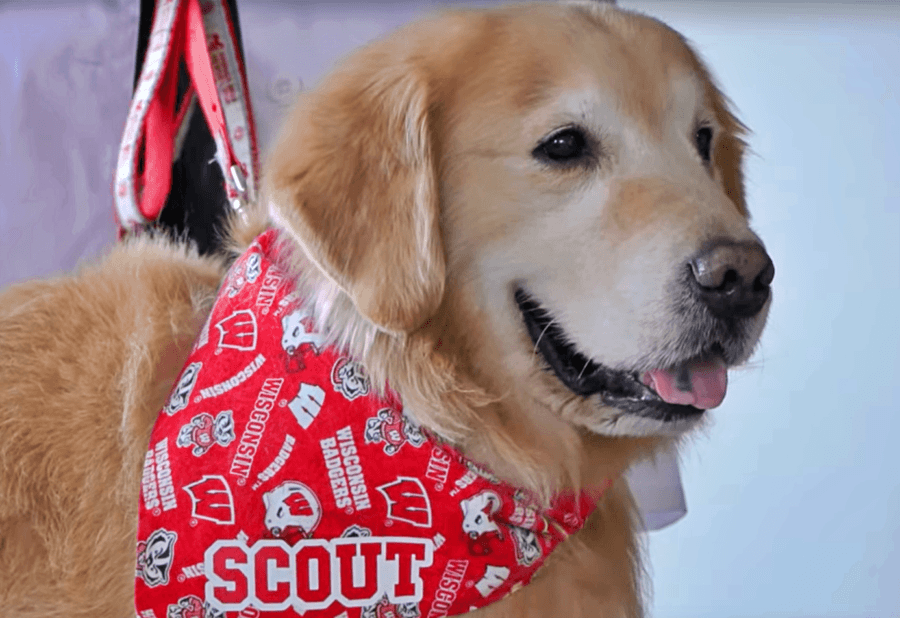 UW Madison/YoutubeScout was diagnosed with an advanced stage of cancer in summer 2019. Now, the good boy is cancer-free.

When the golden retriever of WeatherTech CEO David MacNeil was declared cancer-free this year, the veterinarian group that saved the pup was graced with what is certainly the most expensive “thank you” they’ve ever received: a $6 million Super Bowl ad showcasing their work.

As local news outlet WMTV reported, the golden retriever named Scout was first diagnosed with an aggressive heart cancer that invaded his blood vessels in the summer of 2019. The vets said he had about a month left to live.

“There he was in this little room, standing in the corner…and he’s wagging his tail at me,” MacNeil remembered. “I’m like ‘I’m not putting that dog down. There’s just absolutely no way.'”

Determined to help his best friend beat cancer, MacNeil brought Scout to the University of Wisconsin School of Veterinary Medicine. The seven-year-old dog was immediately given chemotherapy and radiation.

Scout’s condition improved rapidly. Within a month, his tumor shrunk by about 78 percent. Then, 90 percent. And now, the happy dog is cancer-free.

Scout stars in the ‘Lucky Dog’ Super Bowl ad his owner bought for the veterinarian practice that saved him.

Dogs, however, are typically administered lower doses than humans and so they tend to experience milder reactions. Some common side-effects on both humans and dogs of the treatment include vomiting and diarrhea, among others.

Veterinarians at the university said that the aging golden retriever took the treatments like a champ.

“Scout is kind of the perfect patient in that he’s tolerated multiple modes of therapy very well,” David Vail, who is a professor of comparative oncology at the school, said.

“At the end of the day, Scout’s quality of life is his family’s most important concern, as it is ours.”

Scout’s battle with cancer under the university’s care is chronicled in a 30-second Super Bowl ad titled Lucky Dog that will air in front of an estimated 194 million people watching the big game this weekend.

Members of the UW-Madison team who helped with Scout’s treatment are also featured in the commercial which was shot by a professional agency in December at the school and its teaching hospital, UW Veterinary Care.

MacNeil, whose company manufactures automotive accessories as well as home and pet care products, said the commercial cost him nearly $6 million. But wouldn’t it be cheaper — and in some ways more effective — to just write the university a check?

MacNeil said he wanted to do more by helping promote the university’s amazing animal care work and hopefully compel Super Bowl viewers to donate to support the school, too.

After a few months of chemotherapy and radiation treatment, Scout bounced back from his bleak diagnosis.

“We wanted to use the biggest stage possible to highlight Scout’s story and these incredible breakthroughs, which are not just limited to helping dogs and pets,” MacNeil wrote.

“This research will help advance cancer treatments for humans as well, so there’s the potential to save millions of lives of all species.”

MacNeil’s sentiment is echoed by Mark Markel, the dean of UW-Madison’s School of Veterinary Medicine:

“This is an amazing opportunity not only for the University of Wisconsin–Madison and the School of Veterinary Medicine but for veterinary medicine worldwide. So much of what’s known globally today about how best to diagnose and treat devastating diseases such as cancer originated in veterinary medicine. We’re thrilled to share with Super Bowl viewers how our profession benefits beloved animals like Scout and helps people, too.”

According to the university’s press release regarding the Super Bowl ad, dogs and humans share similar cancer rates and similar tumor traits. As a result, some cancer therapies that were first developed for dogs are then used to treat cancer in people.

For instance, the university launched a five-year clinical trial to test a vaccine to prevent different types of cancer in dogs, which can potentially be adapted to develop a similar cancer-preventing vaccine for humans.

If you’ll be in front of the television on game night, be sure to look out for the true star of the show in his tail-wagging commercial.

Next, learn about the man who lost an eye to cancer and reinvented himself as a professional zombie. Then, read the story of the woman who claimed veganism and prayer cured her cancer — then died.