Before he died, David Saunders asked that his body be used for the advancement of medical research. Instead, it was dissected in a Marriott hotel for a paying audience. 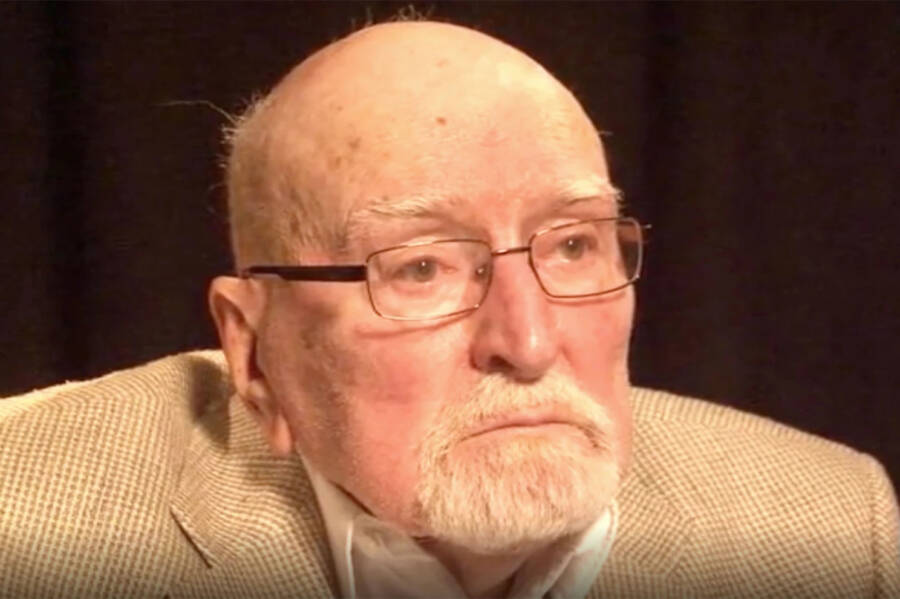 The National WWII MuseumDavid Saunders died of COVID-19 in August.

A World War II veteran and Hurricane Katrina survivor, 98-year-old David Saunders lived a long, admirable life. Before dying of COVID-19 in August, he demanded his body be used for science. His wife Elsie ensured as much, but then discovered that he had been dissected in front of a paying audience in Portland, Oregon.

The macabre event occurred at the Marriott Downtown Waterfront hotel on Oct. 17, 2021. According to KING 5, audience members paid up to $500 for the in-person autopsy. Performed by retired professor of anatomy from the University of Montana in Missoula, Dr. Colin Henderson, the dissection left Elsie Saunders in shock.

Dr. Henderson cut into the limbs, chest cavity, and head. He removed organs like the brain before inviting the tantalized audience to inspect his work. How a COVID-19-infected corpse landed in a hotel ballroom is a tale of sheer incompetence — with Elsie Saunders now desperate to have her husband’s remains returned.

“They are using my husband’s body,” she said. “Like he’s a performing bear or something. I really don’t know the correct way to describe it, but that’s what I feel like. He’s on display. You’re totally helpless when you don’t know what’s happened. And I didn’t — I had no idea what happened.” 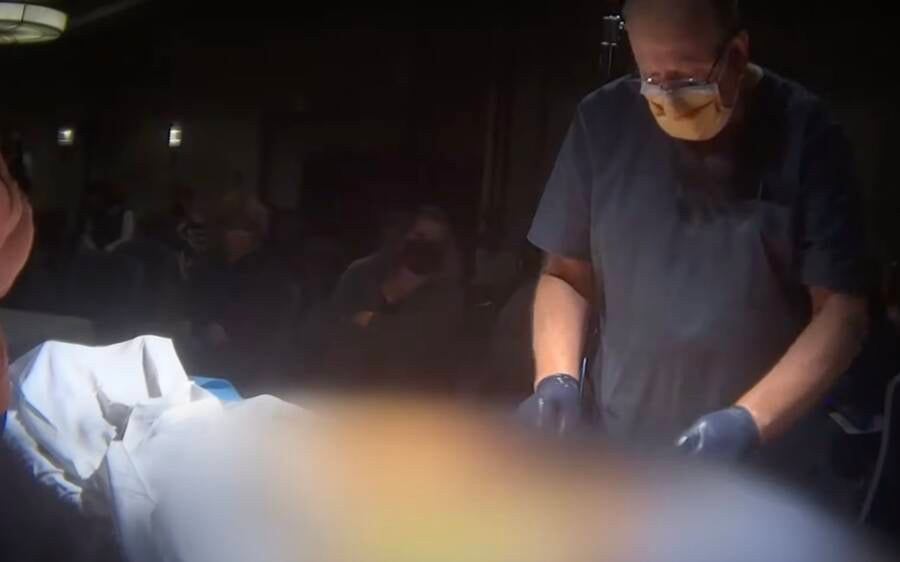 KING5/YouTubeDr. Colin Henderson cut into the chest cavity, head, and limbs, and removed organs like the brain.

David Saunders had answered the call to fight fascism in Europe and continued serving the United States in the Korean War. He and his wife lived in Baton Rouge, Louisiana, where they weathered Katrina in 2005 and forged ahead after the levees broke — until he died of complications from the coronavirus.

Saunders was adamant his body be donated to medical research. His wife thus contacted Louisiana State University to do so when he died, but was turned away, as they didn’t accept COVID victims. In a fateful turn of events, Mike Clark, of Baton Rouge’s Church Funeral Services and Crematory, suggested an alternative.

Clark had prepared the body after Saunders died and believed Med Ed Labs was an appropriate firm to satisfy his wishes.

Unfortunately, the lab had failed to appropriately vet Jeremy Ciliberto when they sold him Saunders’ body for more than $10,000. The founder of Death Science, his company had organized a “Cadaver Class” as part of a traveling “Oddities and Curiosities Expo.” According to Yahoo, their first pay-per-view autopsy event in Portland was their last. 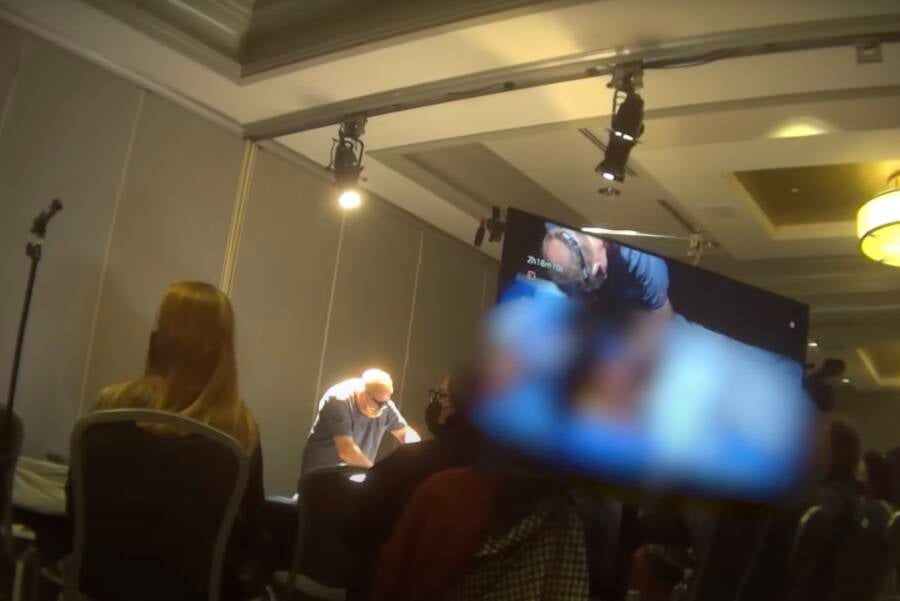 “There will be several opportunities for attendees to get an up close and personal look at the cadaver,” read the event description. “Cadaver access before, after and during breaks.”

It was only after details of the unorthodox event hit the news that Elsie Saunders learned what had become of her husband. Meanwhile, Ciliberto claimed no agreement had been violated, believing the live show fell under “medical research.”

“I can guarantee that that man knew his body would be used for medical research,” said Ciliberto. “Any concerns about the cadaver have always been addressed by the lab. Again I am not the lab, I am the host.”

According to KGW 8, Ciliberto claimed that Las Vegas-based Med Ed Labs had been aware of his plans and that he had obtained the proper consent to see them through. Med Ed Labs manager Obtain Nassiri, however, said Ciliberto had been a dishonest.

“We did not know it was going to be used for a paying audience,” said Nassiri. “We don’t do that. We’ve never done anything like that, ever.” 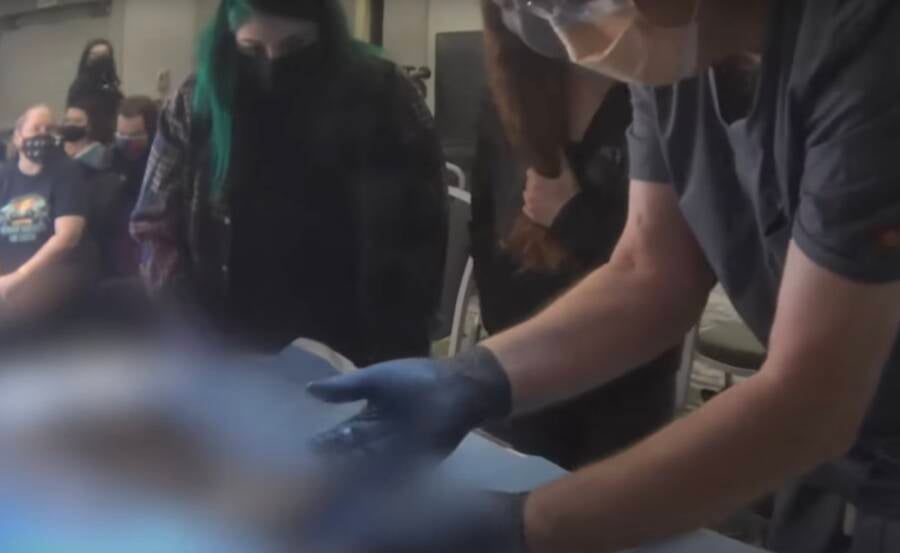 KING5/YouTubeTicket-holders were invited to inspect the body up close.

Naturally, the fact that Saunders died of COVID-19 and his potentially infectious corpse was displayed with dozens of audience members in the room became another concern. Ultimately, the CDC said the bodies of coronavirus victims pose little risk of infection after death. Nassiri also said Saunders had tested negative.

“We do a swab test and we send it to our laboratory and they test the donor swab to let us know if there is coronavirus present or not,” said Nassiri. “In this instance, it came back as negative. There’s no coronavirus in the donor. If it was positive we would turn the donor down.”

A second in-person autopsy scheduled for Halloween in Seattle was canceled as a result of the outrage. As it stands, Elsie Saunders demands her husband’s remains be returned. Mike Clarke said he would track the body down for her and provide a cremation free of charge — and has ceased all work with Med Ed Labs.

“I was totally horrified,” said Clark. “Our whole staff was horrified…It makes me really feel saddened that this gentleman was not given the dignity and the respect that he deserved and what he thought and his family thought that would be happening to his body.”

After reading about a WW2 veteran’s ticketed autopsy, learn about Albert Einstein’s stolen brain. Then, read about “living coffins” that use mushrooms to compost dead bodies.