Hours after he died, Albert Einstein’s brain was snatched by the opportunistic pathologist who did his autopsy — then left it in two jars for the next 30 years.

Because of his world-renowned genius, Albert Einstein’s brain became a coveted object — even after he died. Within hours of Einstein’s death on April 18, 1955, an autopsy was performed on him by a doctor who actually stole his brain.

While Einstein’s son was initially furious, he did later permit the doctor, a man named Thomas Harvey, to give the brain to researchers who wanted to identify whether the physicist’s genius came from a brain that was physically different. 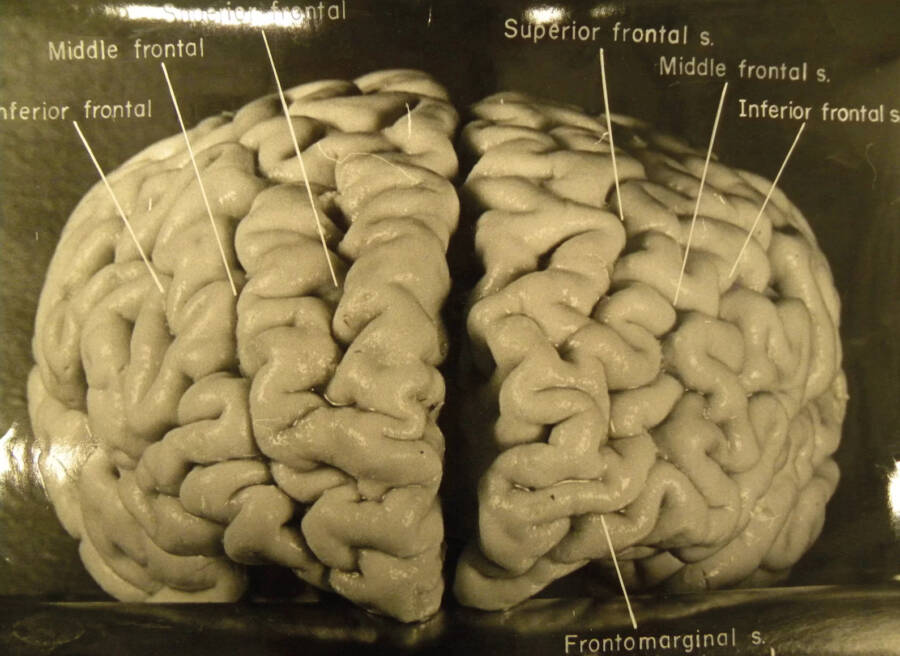 National Museum of Health and MedicineAlbert Einstein’s stolen brain was kept in a cookie jar for 30 years before a journalist tracked it down.

That winding, decades-long quest has since revealed some controversial results — and perhaps at the expense of the Einstein family and the genius himself.

How Albert Einstein’s Brain Was Stolen By Thomas Harvey

Born on March 14, 1879, in Ulm, Germany, Albert Einstein left behind an untouchable legacy, from befriending Charlie Chaplin and escaping Nazi Germany to redefining the study of physics.

Respected all over the world for his genius, it was theorized by many in the scientific community that his brain might actually be physically different from the average human mind. So when he died at age 76 of a burst aorta in Princeton Hospital, his brain was immediately removed from his body by Thomas Harvey.

According to Carolyn Abraham, author of Possessing Genius: The Bizarre Odyssey of Einstein’s Brain, Harvey “had some big professional hopes pinned on that brain” and likely figured that the organ might further his career in medicine.

Not only did Harvey steal Albert Einstein’s brain, but he also removed the physicists’ eyes, which he then gave to Einstein’s ophthalmologist. 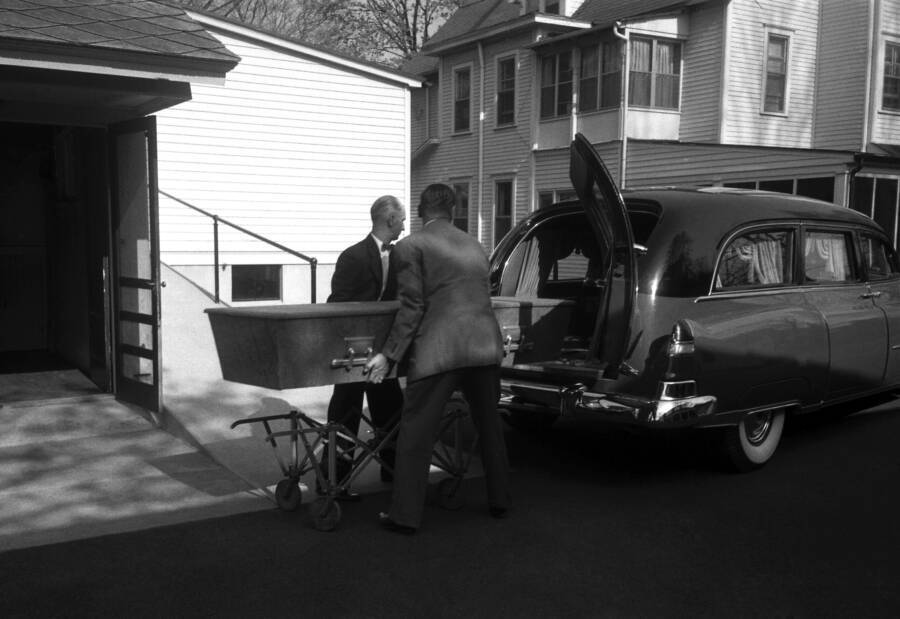 The rest of Einstein’s body was cremated in Trenton, New Jersey, on April 20, at which time his son, Hans Albert Einstein, learned what Harvey had done. He eventually agreed that the brain could be studied, but only on the condition that those studies be published in scientific journals of high standing.

Harvey went on to meticulously document and photograph the brain. He weighed it at 1,230 grams, which was reportedly lighter than the average for men of Einstein’s age. He then sliced the brain into 240 chunks which he also photographed — and of which he even commissioned a painting.

Harvey insisted that his goal in doing so was purely scientific, and he drove the brain cross-country in an effort to give pieces of it to curious researchers. Even the United States Army received samples from the wily pathologist.

“They felt that having it would put them on a par with the Russians,” said Abrahams, “who were collecting their own brains at the time. People were collecting brains — it was a thing.”

Harvey’s obsession with Albert Einstein’s brain not only cost him his job at Princeton, however, but also his medical license and his marriage.

He moved to Wichita, Kansas where, to the shock of one journalist in 1978, Harvey had been keeping the brain in a cider box beneath a beer cooler. Once word got out, the first study of Einstein’s brain was published in 1985 — with controversial results.

Was It Really Different From The Average Brain? 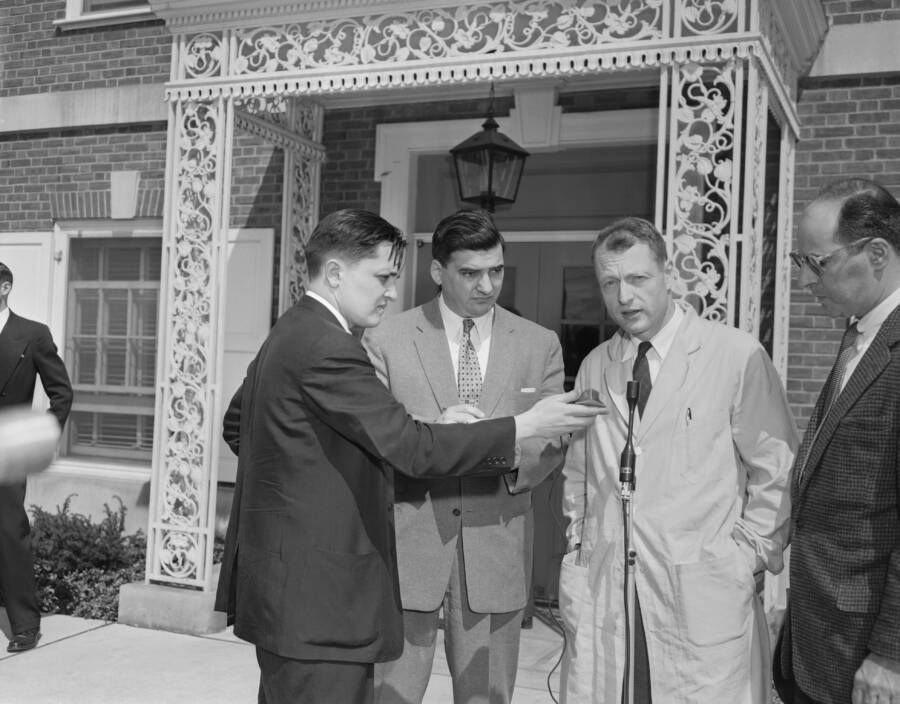 Published in Experimental Neurology in 1985, the first study of Albert Einstein’s stolen brain revealed that it did indeed appear physically different from the average brain.

The genius reportedly had an above average amount of glial cells, which keep the neurons in the brain oxygenated and, therefore, engaged.

A subsequent study out of the University of Alabama at Birmingham in 1996 asserted that these neurons were also more tightly packed than usual and thus possibly allowed for faster processing of information.

Three years later, a third study of Harvey’s photos posited that Einstein’s inferior parietal lobule was wider than average, which might have made him a more visual thinker than most.

And more recently, a 2012 study claimed that Einstein’s brain featured an extra ridge in its mid-frontal lobe, an area associated with plan-making and memory. 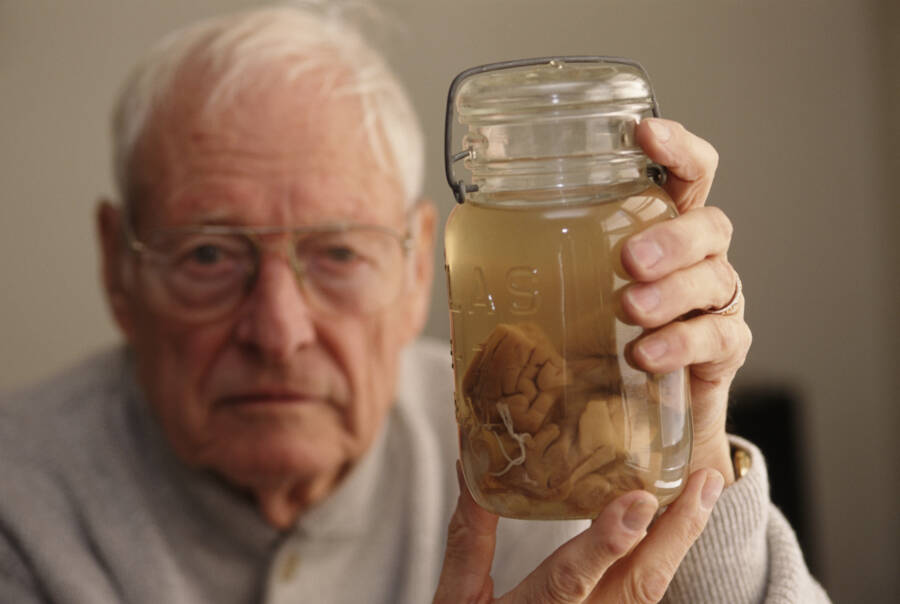 Michael Brennan/Getty ImagesThomas Harvey with part of Albert Einstein’s brain in Kansas in 1994.

But there are many who criticize these studies, like Pace University psychologist Terence Hines who referred to them as a kind of “neuromythology.”

As he emphatically asserted, “You can’t take just one brain of someone who is different from everyone else – and we pretty much all are – and say, ‘Ah-ha! I have found the thing that makes T. Hines a stamp collector!”

Hines isn’t alone in his skepticism. As neurologist Dr. Frederick Lepore, who worked on the 2012 study, said himself, “I don’t know if Einstein was a genius because his parietal lobes were different. If you put my feet to the fire and you say, ‘Where’s special relativity? Where did general relativity come from?’ — we have no idea.” 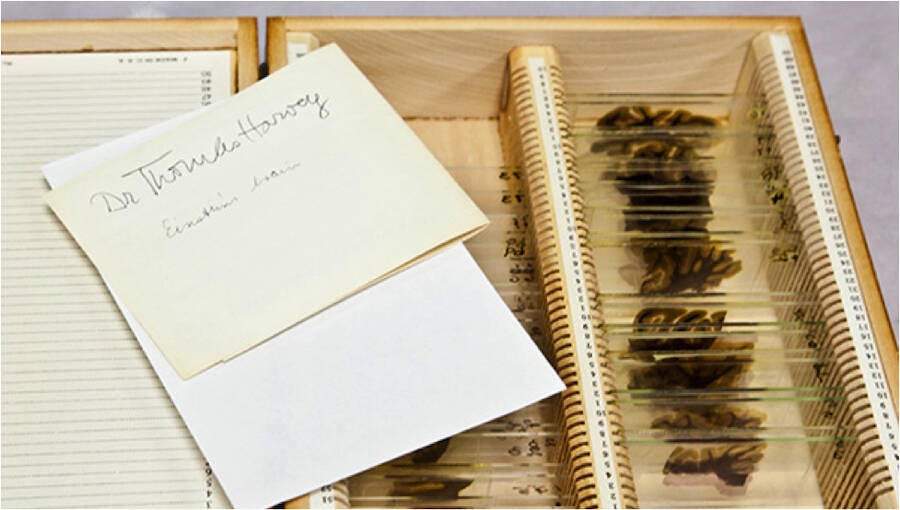 Ultimately, that debate over the specifics of Einstein’s brain is unlikely to end any time soon, despite the fact that most of it was returned to Princeton Hospital. Other slides of the notorious organ, however, were donated to medical institutions.

Before his death in 2007, Thomas Harvey donated the remainder of Einstein’s brain to the National Museum of Health and Medicine, with Philadelphia’s Mütter Museum having samples of its own on display to this day.