The younger sister of Eva Braun, Gretl Braun was one of Adolf Hitler's closest friends from his rise to power until the bloody end of the Third Reich. 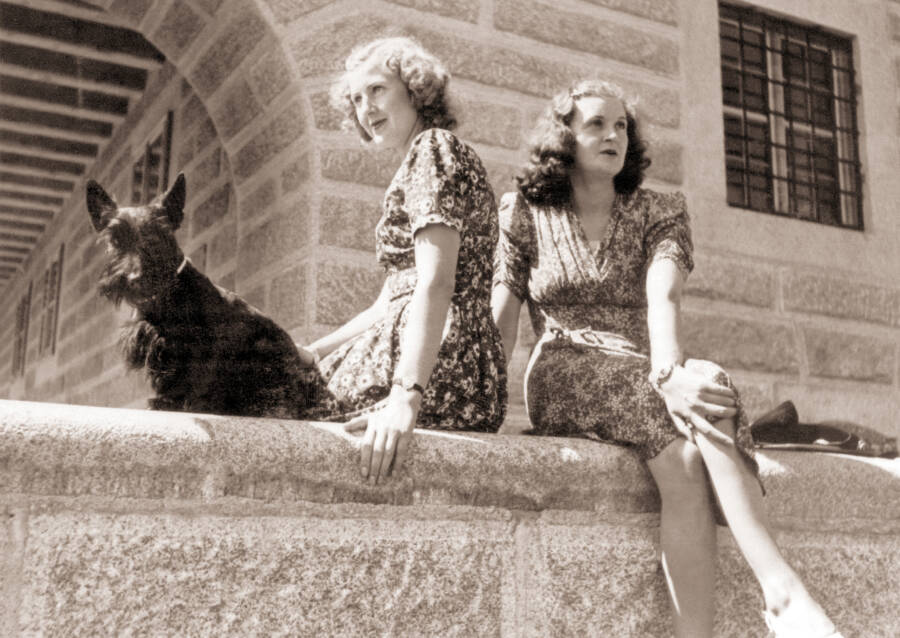 Galerie Bilderwelt/Getty ImagesMargarethe ‘Gretl’ Braun (right) with her sister Eva at the Kehlsteinhaus, or Eagle’s Nest, in 1943.

Gretl Braun was one of two sisters of Eva Braun, Adolf Hitler’s wife, and she was a member of Hitler’s inner circle for much of his rise to power and throughout World War II.

Gretl was so ingrained in the life of Nazi high command that she married Waffen-SS commander Hermann Fegelein, who was Heinrich Himmler’s liaison on Hitler’s staff. But because she largely remained in the shadow of her infamous sister, Gretl Braun is one of the most overlooked members of Hitler’s tight social circle during his reign.

Yet through her actions and connections, Braun was present at some of the most momentous events of the Third Reich.

And, just three days before Nazi Germany surrendered — and two days after her husband was executed for desertion — she gave birth to a daughter, Eva Barbara Fegelein, the last of the children born to Nazi ruling faction. 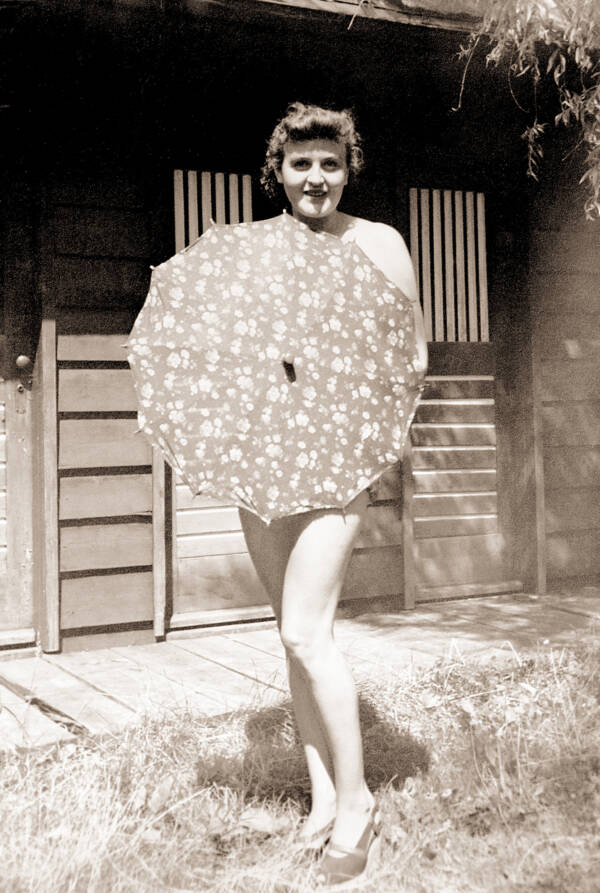 Galerie Bilderwelt/Getty ImagesGretl Braun in Berchtesgaden in 1940. She would spend increasing amounts of time at Hitler’s mountain retreat as the war dragged on.

Margarete Berta “Gretl” Braun was born Aug. 31, 1915, the youngest of three girls born to a middle class Munich couple. Her father, Fritz, a civil servant, had volunteered for military service at the outbreak of the First World War the year before, which kept him away until 1919.

Gretl spent her earliest years alone with her sisters, Eva and Ilse, and their mother, Fanny. In 1932, as the turbulent postwar years drew to a close and right-wing paramilitaries roamed Munich’s streets, Gretl dropped out of school. Eva got her a job with Heinrich Hoffman, the burgeoning Nazi Party’s official photographer.

It’s possible that Hoffman hired the younger Braun to ingratiate himself with Adolf Hitler, with whom Eva had already become close after meeting him in 1929.

That job was Gretl’s ticket into Hitler’s inner circle and became a chance to develop a shared passion for photography with her sister. The two young women settled into a three-bedroom house near the city center, where they entertained senior Nazis in between trips to Berghof, Hitler’s private retreat in the Bavarian Alps. 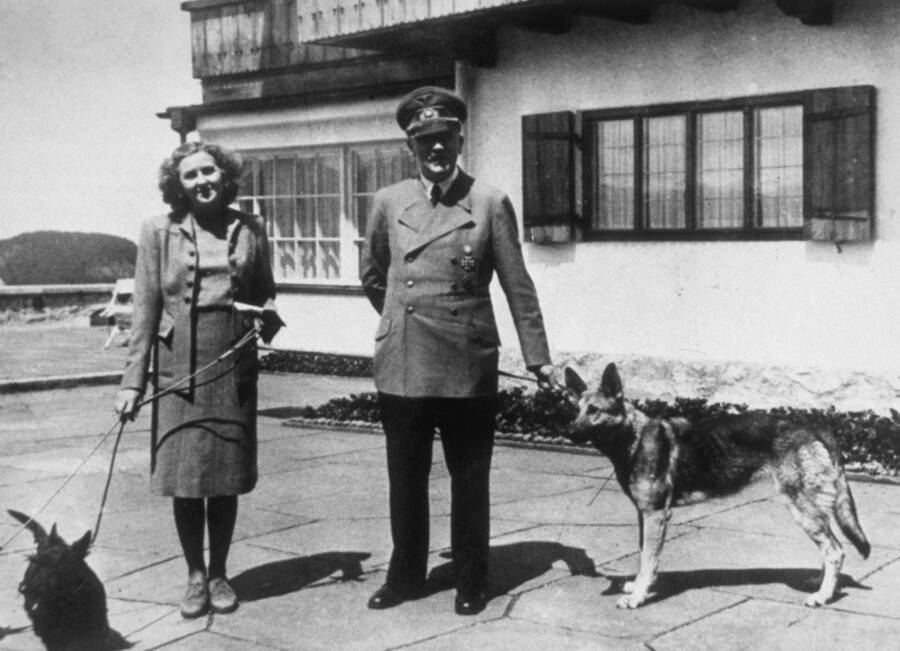 Keystone/Getty ImagesAdolf Hitler and Eva Braun at the Kehlsteinhaus in 1940. Hitler was fond of Gretl, often lecturing her on the hazards of smoking and playing matchmaker on her behalf with a series of young officers.

For the most part, Gretl Braun stayed in the background in the years before and during World War II, acting as constant companion and chaperone to her older sister. In 1943, she even attended the Bavarian State School of Photography.

But apart from photography, the Braun sisters shared a deep love for cigarettes. Hitler constantly tried to discourage the habit among his secretaries and underlings’ wives, even offering them jewelry and watches to quit.

Once, he even bluntly told Gretl, who’d refused the jewelry, “Give up cigarettes, and I’ll offer you a villa.” But Braun wouldn’t be dissuaded: “My Fuhrer, a villa would be a great joy to me, but only one, whereas smoking gives me twenty little satisfactions every day, satisfactions that last and multiply.”

Like many of the young women who surrounded the Nazi leader, Gretl Braun was always on the lookout for a suitable — and influential — husband. Hitler himself encouraged young party officials, military officers, and SS members to court her.

One of these was Fritz Darges, Hitler’s personal adjutant. But the relationship ended when Darges was reassigned to the Eastern Front in 1944 following a supposedly insubordinate comment in front of Hitler. Rumors abounded, however, that Gretl was also pregnant with Darges’ child, and his refusal to marry her angered the leader.

Meanwhile, the Nazis’ war effort turned steadily against them, but the Braun sisters continued to live a life of ease, shuffling between one mountain retreat to the next. 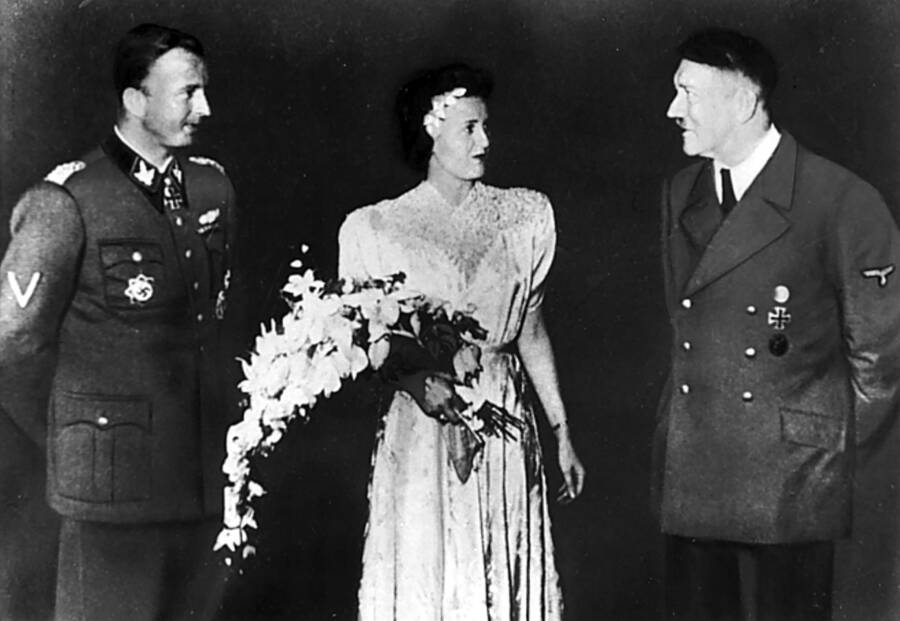 Fegelein, commander of the Waffen-SS Cavalry Brigade who had taken part in numerous atrocities on the Eastern Front, was an opportunist later called one of the “most disgusting persons in Hitler’s circle.”

He had worked his way into Himmler’s favor through a combination of flattery and manipulation, gaining himself choice assignments, promotions, and decorations despite horrific casualty rates among the units he commanded and several disappointing defeats.

It was Eva who’d engineered the wedding, held in Mirabell Palace in Salzburg, Austria, with Hitler in attendance and witnessed by Himmler and Martin Bormann, Hitler’s private secretary. Eva insisted that the wedding be perfect, “as beautiful as if it were my own,” supervising every aspect of the planning.

Fegelein was only too happy to marry Gretl, since it would cement his position in the hierarchy. As for Gretl, her prestige was instantly amplified, and she was taken out of her sister’s shadow, now the bride of a high-ranking and quickly advancing SS officer.

And despite the increasingly common food shortages and bombings of major cities, the newlyweds partied for three days after the wedding — while the Nazi leadership turned its attention to the deteriorating situation in France and Italy, where the Allies had just captured Rome.

The Birth Of Eva Barbara Fegelein 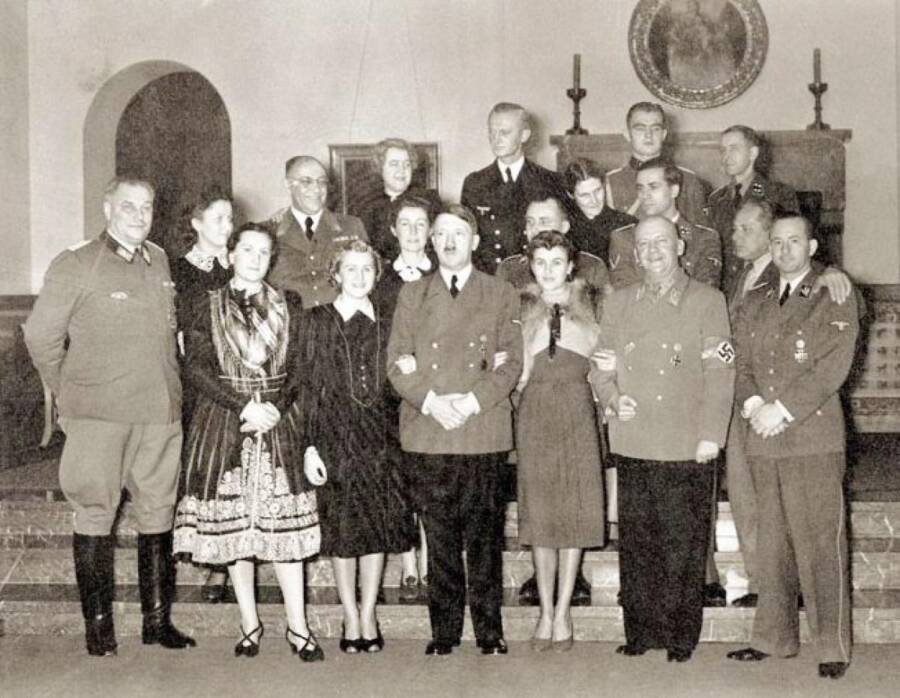 Galerie Bilderwelt/Getty ImagesHitler with guests at at Berghof in December 1939. He is flanked by Eva (left) and Gretl (right).

The Gretl Braun and Hermann Fegelein had little time together before the war entered its final catastrophic stage. Just a week after the wedding, Fegelein was promoted to lieutenant general. And he was present on July 20 at the Wolf’s Lair when Claus von Stauffenberg detonated a bomb in the failed attempt to assassinate Hitler.

He survived, and his gamble of using marriage to Hitler’s de facto sister-in-law had paid off — he was moving up quickly. And soon, Gretl was pregnant and installed at the Berghof, far from the bombing and fighting.

Over the final months of 1944, Fegelein led the investigation into the July 20 Plot, and Eva shuttled back and forth between Berlin and the Berghof to keep her sister company.

In January 1945, Hitler and Eva, along with most of the government and their hangers-on, moved into the fortified Führerbunker complex in central Berlin. Three months later, the Red Army penetrated the shattered German military and was on the verge of conquering the Nazi capital.

With defeat looming, a desperate Fegelein attempted to flee the country and called Eva to advise her to do the same. When Himmler moved to make a separate peace agreement with the Western Allies, Hitler exploded in fury and ordered the arrest of Fegelein, whom Hitler suspected had betrayed him.

A commando squad found Fegelein at home, allegedly drunk and in civilian clothes. On the night of April 28, as the incapacitated Fegelein was tried and shot for desertion, Hitler finally married Eva Braun.

Two days later, Hitler and Eva Braun killed themselves in Hitler’s bunker, not a week before Gretl Braun gave birth to Eva Barbara Fegelein, their niece, on May 5.

What Happened To Gretl Braun? 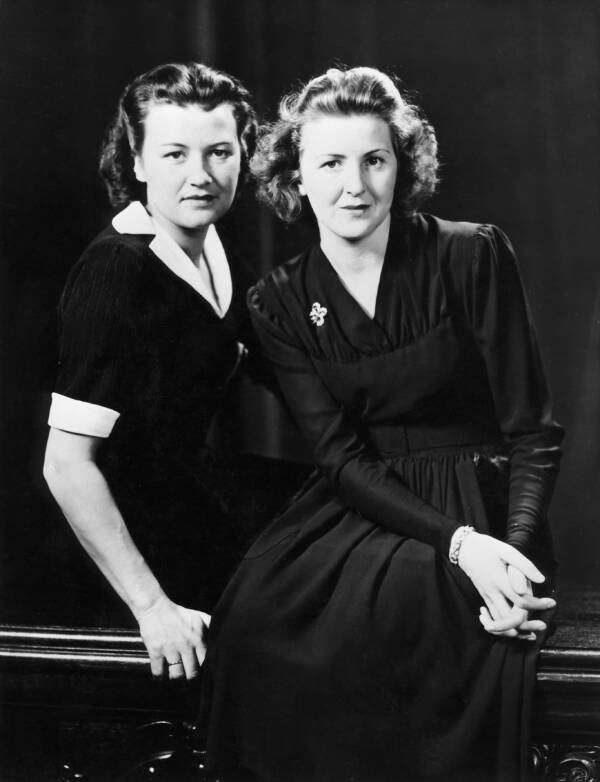 DPA/Picture Alliance via Getty ImagesWhile Gretl Braun rested through her pregnancy at the Berghof in 1945, her husband was executed and her sister killed herself in Berlin as Soviet forces invaded the city.

After the war, Gretl Braun cut off contact with her family, remarried, and returned to Bavaria as the Nazi empire was dismantled and her former friends were tried, imprisoned, or driven into obscurity.

Meanwhile, Gretl and Eva’s father, Fritz, later claimed to have been opposed to his daughters’ relationships with Hitler, calling him a “young whippersnapper who thinks he knows it all.”

In 1971, her daughter, always known as “little Eva” in honor of her aunt, died by suicide from ingesting poison following a fatal car crash that had involved her boyfriend, according to a family member.

In the late 1970s, one of Gretl’s cousins managed to track her down. By that time, she was living with Alzheimer’s in the little Alpine town of Steingaden, southwest of Munich. Gretl Braun died at the age of 72 on Oct. 10, 1987, and the Braun family, like Hitler, was extinguished.

Gretl Braun never spoke publicly about her closeness to Hitler or her time in the Nazis’ upper echelons. And it remains unknown if she felt any remorse for her past, or if, like her one-time lover Fritz Darges, she “would do it all again now” had history taken a different turn.

After learning about Gretl Braun, take a closer look at her sister Eva, Hitler’s longtime mistress. Then, read about the truth of Hitler’s death.