The official investigation into D.B. Cooper by the FBI wrapped up last year, without any formal announcement of a suspect. 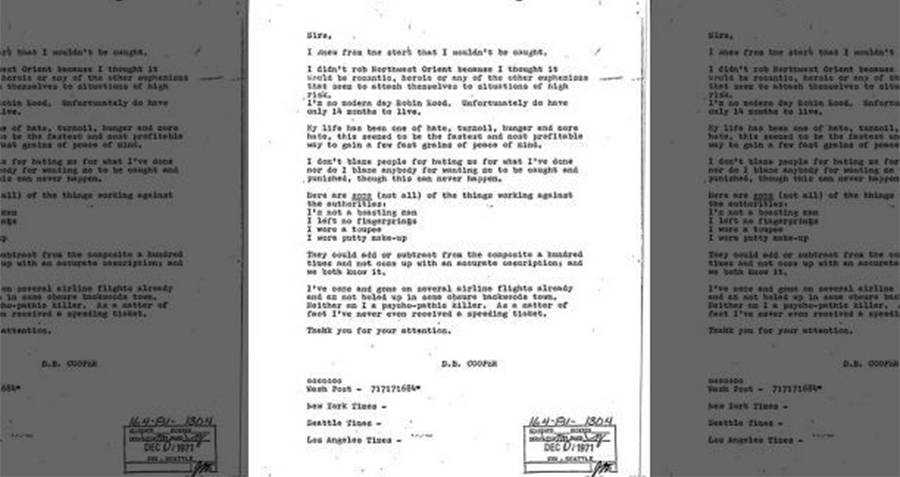 Fox NewsA copy of the letter released by the FBI.

The Federal Bureau of Investigation has recently released a letter, previously undisclosed, that contains information related to the infamous D.B. Cooper hijacking case.

On Nov. 24, 1971, almost 46 years ago exactly, a man under the name of Dan Cooper hijacked a flight from Portland to Seattle. He told the flight crew that he had a bomb, and ordered them to do as he said. After releasing the passengers, he demanded a ransom, then ordered the pilots to reroute the flight to Mexico. Then, he suddenly parachuted out the back door of the plane, along with $200,000 in cash.

To this day, his landing site has never been found.

An expert in the case, acclaimed D.B. Cooper sleuth Tom Colbert, believes that there is no doubt that the newly released letter was written by Cooper.

“We have no doubt it’s from Cooper and the reason is that he cites he left no fingerprints on the plane,” he said. “The reason that’s critical is because it’s absolutely true.”

The letter, originally mailed to The New York Times, The Washington Post, The LA Times, and The Seattle Times, details the reasons behind the hijacking.

“I knew from the start that I wouldn’t be caught,” the letter opens, referring to the Nov. 24 incident.

“I didn’t rob Northwest Orient because I thought it would be romantic, heroic or any of the other euphemisms that seem to attach themselves to situations of high risk,” it continues. “I’m no modern-day Robin Hood. Unfortunately (I) do have only 14 months to live.”

“My life has been one of hate, turmoil, hunger and more hate; this seemed to be the fastest and most profitable way to gain a few fast grains of peace of mind,” the letter said. “I don’t blame people for hating me for what I’ve done nor do I blame anybody for wanting me to be caught and punished, though this can never happen.”

He went on to list the ways that he ensured he would not be found, including wearing “putty makeup” and a toupee, and not being a “boasting man.” He added that he was also confident that no one would ever recognize him.

“They could add or subtract from the composite a hundred times and not come up with an accurate description,” the letter said. “And we both know it.”

He also claimed that he didn’t leave fingerprints, which as Colbert pointed out, was true.

“There were no prints found in the back of plane,” Colbert explained. “They found 11 partial prints that’s all, sides, fingers, tips and palm. But no prints of value were found.” 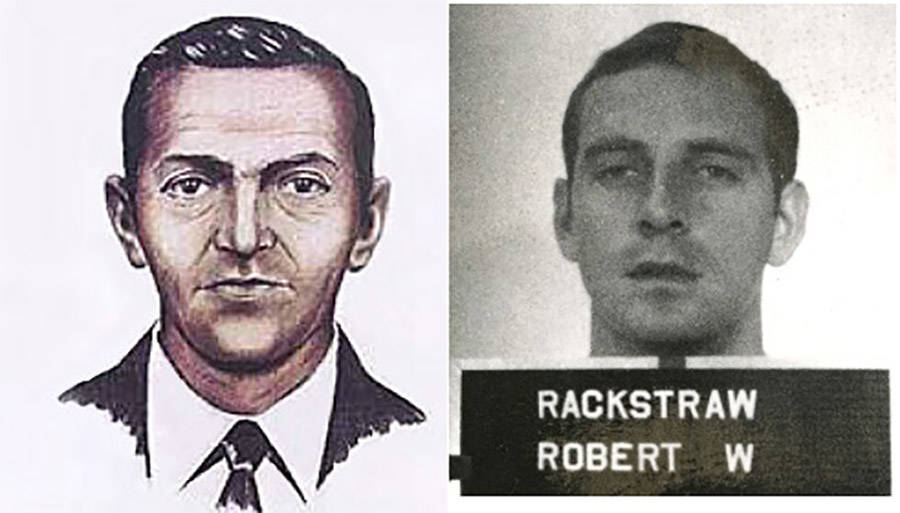 The official investigation into D.B. Cooper by the FBI wrapped up last year, without any formal announcement of a suspect. Colbert, however, remains confident that Cooper is living his life in modest comfort in California, under the name Robert Rackstraw.

Next, read more about the D.B. Cooper case. Then, read about Fred Valentich, another man who went missing from an airplane.