The video claims that a reflection in an astronaut's visor proves that the Apollo 17 mission was a hoax.

Since Neil Armstrong and Buzz Aldrin took their small step for man and their giant leap for mankind back in 1969, conspiracy theorists have dedicated their lives to proving that that step — and all the other steps after it — never happened.

Most recently, a YouTube user under the name Streetcap1 posted a video on the site that alleges that at least one photo taken during the most recent moon landing, the Apollo 17 mission, was faked.

The video, titled “Reflection in a Visor,” features a photo that was allegedly taken in December of 1972, during the Apollo 17 mission. Streetcap1 claims that the reflection of a stagehand is clearly visible in one of the astronaut’s helmet visors.

In the voiceover of the video, Streetcap1 claims that the figure appears to be someone from the early 70s, with long hair. 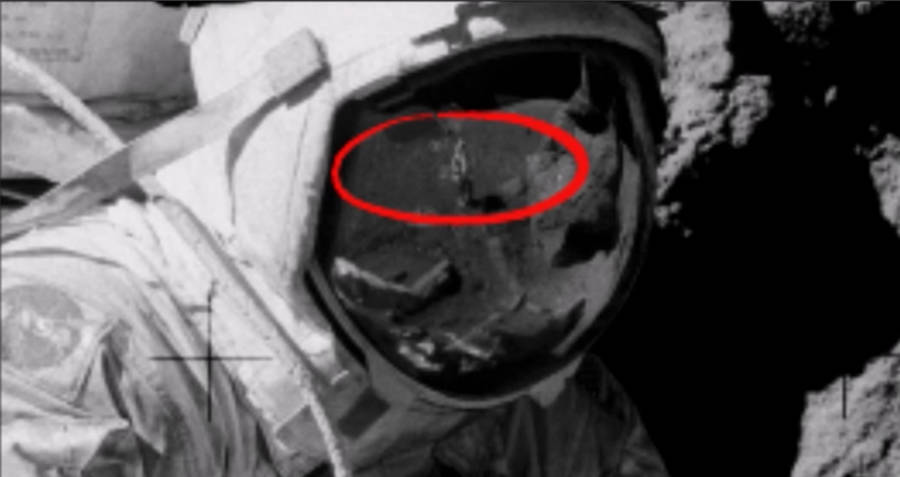 YouTubeScreencap of the video, showing the figure that Streetcap1 believes to be a stagehand.

“You can see some sort of, it looks like a man, back in the early 70s, long hair, wearing some sort of waistcoat-type thing… and a shadow of that figure presumably,” Streetcap1 said.

In the video description, Streetcap1 claims that the figure is not wearing a backpack, like the other astronauts would have been, and that “even allowing for visual distortion due to the visor, surely you would see a backpack because they were extremely large.”

According to the video, Streetcap1 used to be a believer in the moon landings himself, but the discovery of the photo cast some doubts.

Commenters were split when it came to agreeing with Streetcap1. A few of them agreed that the photo seems faked and that the figure more closely resembles a stagehand than an astronaut, however, most people seemed to think it was made up, with one commenter simply posting: “You’re an idiot.”

Conspiracy theorists have long believed that the moon landings were faked, pointing out numerous pieces of the photos that “prove” the landings never happened. A favorite giveaway of conspiracy theorists is, of course, the movement of the flag in the Apollo 11 photos (which the astronauts caused themselves.)

Next, take a look at these (most likely real) photos of the moon landings. Then, check out these facts about Apollo 11.