“Dead Shot Mary” Shanley: The 1930s NYPD Officer With A Gun In Her Purse

Mary Shanley was one of the NYPD's first female police officers — and one of its most badass. 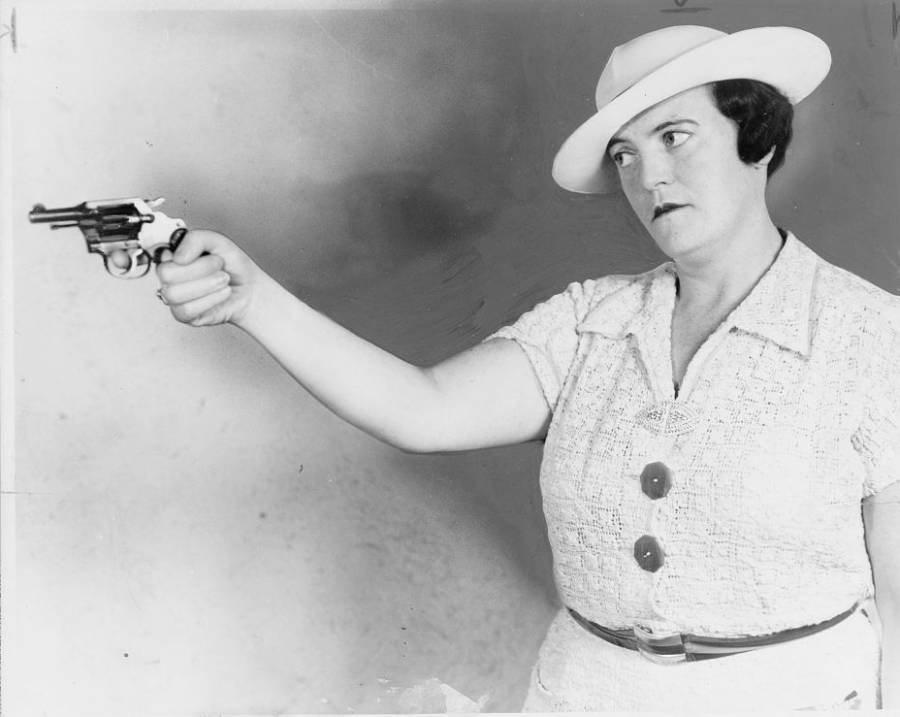 If you found yourself amid crowded New York City sidewalks in the 1930s and ’40s, you might well have run into a brawny Irishwoman named Mary Shanley.

In her hat and day dress, Shanley probably looked like a mother going about her day — which is precisely why the New York City Police Department considered her to be one of its most valuable, streetwise assets.

Indeed, the unassuming Shanley had a storied career working for the police as an undercover detective. If you were an aspiring pickpocket or petty thief roaming the city streets, Shanley was your worst nightmare. After all, Shanley didn’t get the nickname “Dead Shot Mary” for nothing.

Mary Shanley was born in Ireland in 1896, after which her family immigrated to New York City and took up residence in Hell’s Kitchen. Growing up in that atmosphere helped imbue Shanley with street smarts early in life, and allowed her to become quite familiar with the city’s seedy underbelly long before she joined the police force. When she did so, in the early 1930s, she was one of the NYPD’s first female officers.

As an officer, Shanley believed that cops sometimes shouldn’t look like cops (see above). Moreover, incognito or otherwise, her pride at packing heat helped make her “the Annie Oakley of the NYPD.”

“You have the gun to use, and you may just as well use it,” she was fond of saying. And use it she did — if more often for intimidation than actually shooting anyone dead.

When Shanley first started to work for the NYPD, they didn’t issue guns to female officers. But that changed soon after, and Mary Shanley earned the distinction of becoming the first woman employed by the NYPD to use a gun to make an arrest: She fired into the air to startle a racketeer she’d been pursuing. 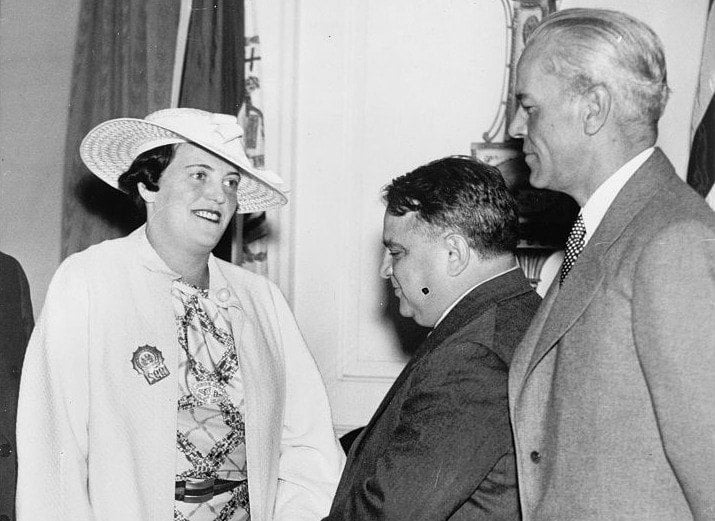 Gun or no gun, in the 1930s, it wasn’t exactly commonplace for women to work for the police. Early on in her career, around 140 female officers worked for the NYPD, all of whom were on similar beats as Shanley: out on the streets looking for pickpockets, looters, vagrants, and prostitutes.

But these female officers also had another priority: to identify and protect vulnerable women within the city they served. And their ability to become “lost in the crowd” made them uniquely positioned to do so.

Shanley, who never married or had children of her own, was even known to use a young niece as a stand-in child when she was on patrol in order to appear that much more innocuous. The nephew of that niece later told The New York Times that his aunt Mary had a sixth sense of sorts; that “she could smell a crook. She could go into a crowd and know who to tail.”

As Shanley herself told the Panama City News Herald in 1939:

“I can usually tell in 20 minutes whether a suspect is legitimate or not. Often when I have a hunch there is something phony about a woman, I trail her a whole day without seeing her try anything funny. If that happens, I trail her home, and then look for her picture in the police files. If I find it, I keep after the woman until I catch her at work.” 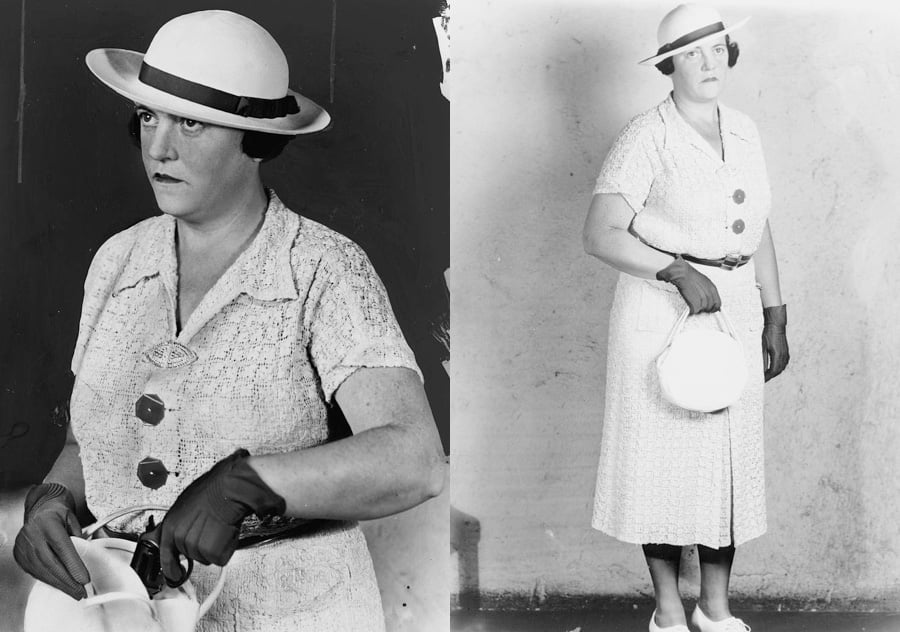 Aside from pickpockets, Shanley was also quite skipped at apprehending “seat tippers” — thieves who would situate themselves in theaters, usually behind a woman, and tip back the seat on which the unsuspecting victim had deposited a bag. During the show, the bag would then fall to the ground unnoticed and the clever thief could make off with its contents.

When Shanley saw seat tippers in the act, she would often creep up behind the would-be thief in the darkened theater and place her hand on their shoulder, whispering in the person’s ear: “This is a pinch, honey.”

Shanley’s undercover work extended beyond seat tippers. She also apprehended underground fortune-tellers (which was illegal in Shanley’s day), and once acted as Grace Kelly’s personal bodyguard when the actress visited a New York department store.

On another occasion, she arrested a suspected murderer in Queens, saying only “drop that gun, boy” as she snuck up behind him, revolver in hand. 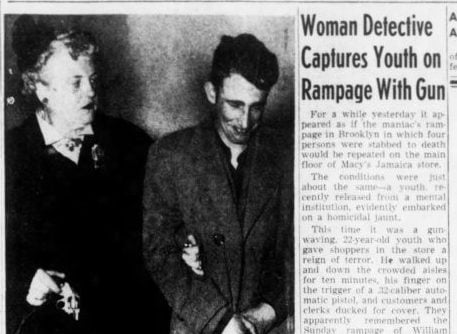 Of course, Mary Shanley’s proclivity for using her firearm did get her into trouble at least once: While having an off-duty hours drink at her favorite bar in Queens, a man harassed her for being Irish (having presumably heard her brogue) and she drunkenly shot down the bar, just missing him.

Police actually arrested Shanley for the act, and she received a slight disciplinary demotion. Still, Shanley was quick to rebound from her fall from grace, and by the time she retired from the force in 1957, she’d made more than 1,000 arrests in her 26 years with the NYPD.

She didn’t make all of these arrests with the help of her gun, however. In the summer of 1938, Shanley apprehended a suspect outside of Macy’s — and knocked him out with her pocketbook.

When some nearby police officers ran over to help — thinking that Shanley had been the near-victim of a mugging or something else untoward on the city streets — she flashed her badge and told them rather matter-of-factly: “Well, I got him — and I can take him in myself.”

Next, read about Belle Boyd, Confederate spy and Civil War badass. Then, discover the most badass women of World War II.