Dennis DePue brutally murdered his wife Marilynn in April 1990 — and when a passing couple saw him trying to hide the body, a terrifying chase ensued. 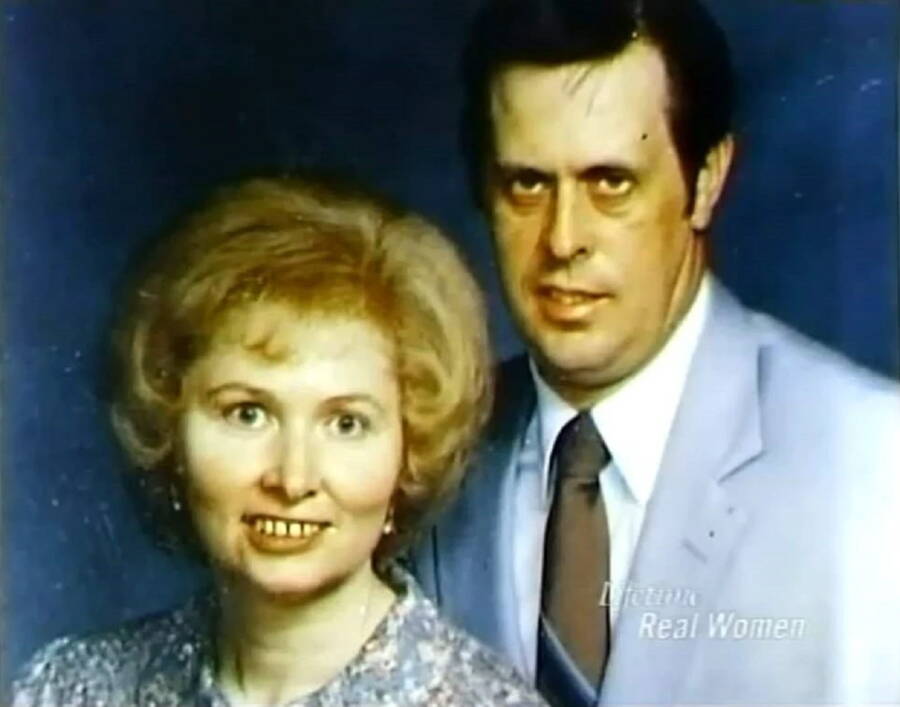 YouTubeDennis Depue and his wife, Marilynn, in an undated photo.

On Easter Sunday, April 15, 1990, Ray and Marie Thornton were on a traditional weekend drive along Snow Prairie Road, a rural highway 12 miles outside Coldwater, Michigan. In their rear-view mirror, a Chevrolet van suddenly appeared, driving aggressively, before overtaking them.

The couple had been playing a game of making slogans from the license plates of passing cars, so when the van sped past, Marie saw the plate beginning ‘GZ’ and remarked, “Geez he’s in a hurry.”

As they approached an abandoned schoolhouse, the Thorntons saw the same van parked to the side of the building — then Marie caught a disturbing sight. The driver was holding what appeared to be a bloody sheet and walking toward the rear of the schoolhouse. Marie, although shocked, was not quite sure what she had just witnessed, and as they discussed calling the police, Ray Thornton saw an ominous van approaching again in his rearview.

Gaining speed rapidly, the same Chevy van they had just seen at the schoolhouse now eerily rode their rear bumper for the next two miles, inspiring the opening scene of the 2001 horror movie Jeepers Creepers.

What Ray And Marie Thornton Saw 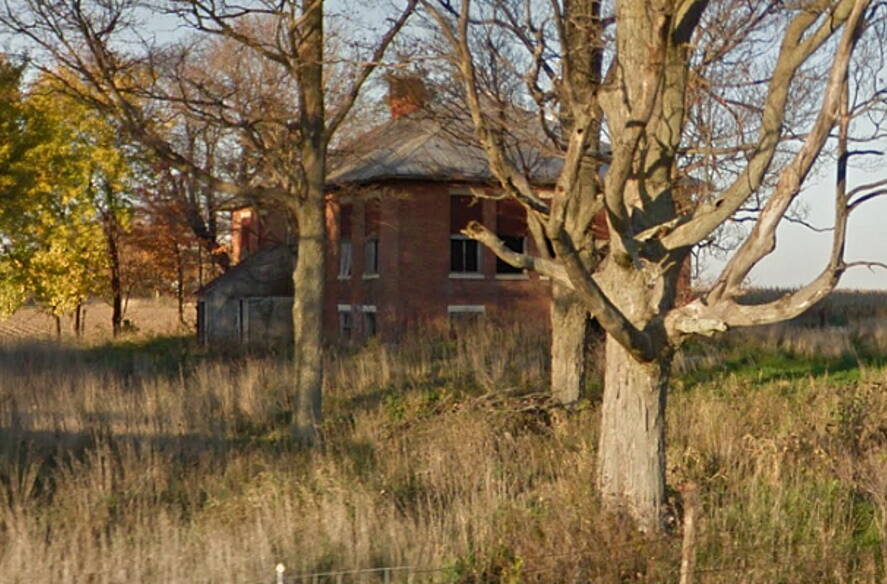 Google MapsThe abandoned schoolhouse in Michigan where Dennis DePue was trying to hide his wife’s body when the Thorntons drove by.

As the Thorntons worried what the driver pursuing them would do, they turned off the highway, just as the van suddenly pulled to the side of the road. To try and obtain the full license plate for the police, Ray Thornton turned his car around and they approached the green van again.

Now, however, the man they had seen driving was now crouched down changing the rear license plate of the van.

The Thorntons could also see the van’s open front passenger door — and the inside was soaked in blood. Rushing back to the schoolhouse the couple found the bloody sheet partially stuffed into an animal hole. As they contacted the Michigan State Police recounting what they had just witnessed, unbeknownst to them, police were already scouring the area looking for that man and his injured wife.

Dennis DePue And The Murder Of His Wife 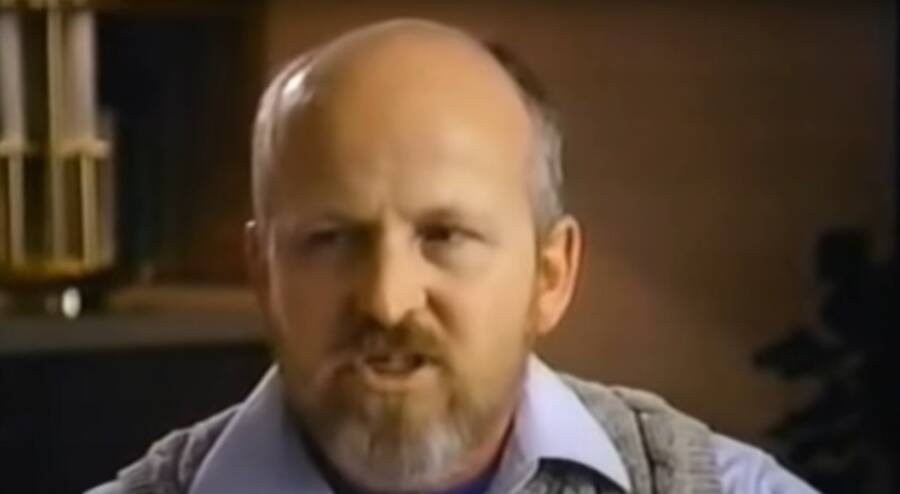 Dennis Henry DePue was born in 1943 in Michigan and remained in his home state as an adult while working as a property assessor. In 1971, he married Marilynn, who became a popular high school counselor in Coldwater. The couple had three children, two girls and a boy, but DePue’s paranoid and controlling ways had emerged, wearing Marilynn down. The sullen and withdrawn DePue isolated himself from the family and frequently accused Marilynn of “turning the children against him.”

Marilynn filed for divorce in 1989, telling her attorney that DePue was trying to control every decision in her life. DePue made no claim on the house following the divorce but maintained a home office in the garage.

One day Marilynn came home to find DePue sitting on the couch in the living room despite her having changed all the locks. The couple’s divorce was finalized in December 1989 — and just five months later, Marilynn would be dead.

DePue became completely unhinged on Easter Sunday, 1990, as he arrived at the family home to pick up two of their children. Their younger daughter, Julie, had refused to go with DePue that day, and as he went inside, he became angry, when their son, Scott, also began stalling. When Marilynn talked to DePue, his anger increased, and he grabbed her, shouting accusations.

Grappling with Marilynn, DePue pushed her down the stairs, and as their horrified children looked on, DePue mercilessly beat her at the bottom of the stairway. With the children pleading with him to stop, Jennifer, their oldest daughter ran outside to a neighbor’s house to call the police.

DePue left the house with Marilynn seriously injured, telling the children he was taking her to the hospital, but they never arrived. The police had begun a widespread search for them both, then the Thornton’s encounter with DePue’s van and the bloody sheet came to light, making Dennis DePue the main target of the police’s investigation.

A forensics team sealed off the abandoned schoolhouse crime scene, and tire tracks at the school matched DePue’s van. The evidence strongly indicated Depue killed his ex-wife, which was confirmed the next day, as a highway worker discovered Marilynn’s body, shot once in the back of the head, lying near a deserted road. The road was midway between the schoolhouse and her home according to an episode of Unsolved Mysteries.

By then Dennis Depue was in the wind, a fugitive wanted for murder.

The Manhunt For Dennis DePue — And His Bloody End 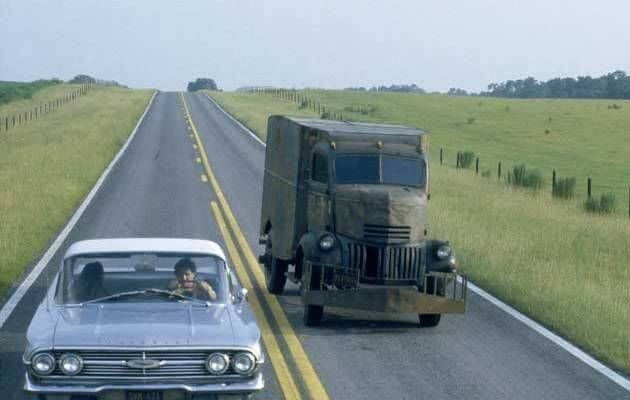 Over the next several days, and weeks, Dennis DePue sent a series of bizarre, rambling letters to friends and family, attempting to justify Marilynn’s death. Seventeen in all, postmarked in Virginia, Iowa, and Oklahoma, in which he ranted over her tricks and lies, writing how he had lost his wife, children, and home, and was now too old to start over.

On the evening of March 20, 1991, as a Dallas, Texas woman arrived home, she noted her boyfriend’s van sitting in the driveway, unusual because he usually kept it inside the garage. Once inside, her boyfriend “Hank Queen,” told her he needed to make an emergency trip home, his mother was very ill.

“Hank” kept an interested eye on the Unsolved Mysteries episode playing on the TV, gathering up his clothes and personal items, asking her to make him some sandwiches for the trip. He deliberately wanted to keep her distracted in the kitchen so that she would not see the show – the second half of which featured a man named Dennis Depue wanted for the murder of his ex-wife.

As “Hank” said goodbye to her, driving off in his 1984 Chevrolet van, the woman had a suspiciously weird feeling that she would never see him again. DePue took off immediately fearing one of his girlfriend’s friends would recognize him from the popular show and drop the dime on him. He was right, as state and county law enforcement already had the false Texas license plate of DePue’s van based on a tip off from the show.

It took DePue four frantic hours to drive into Louisiana then across the Mississippi state border. Louisiana state troopers had spotted Depue’s van, and he led them on a 15-mile high-speed chase, refusing to be pulled over according to The Associated Press. Across the state line, Mississippi authorities lay in wait alerted by their Louisiana counterparts and the FBI, that the driver was wanted for murder.

When DePue’s van blasted through a roadblock, Warren County, Mississippi, Sheriff’s officers shot out both rear tires. DePue shot at officers’ cars, trying to ram them off the road, as his van dragged along before coming to a forceable stop by officers around 4 a.m. As an officer approached his van, DePue was found dead “with the .357 in his left hand and his thumb on the trigger.”

Although certainly fancified, the chilling event that kicked off the manhunt for Dennis DePue was immortalized in the tense opening sequence of Jeepers Creepers.