The Tragic Story Of Devonte Hart, A Teenager Murdered By His Adoptive Mother

In 2014, a photo of Devonte Hart hugging a police officer during a Black Lives Matter protest went instantly viral. Just four years later, he made headlines again — for a tragic reason. 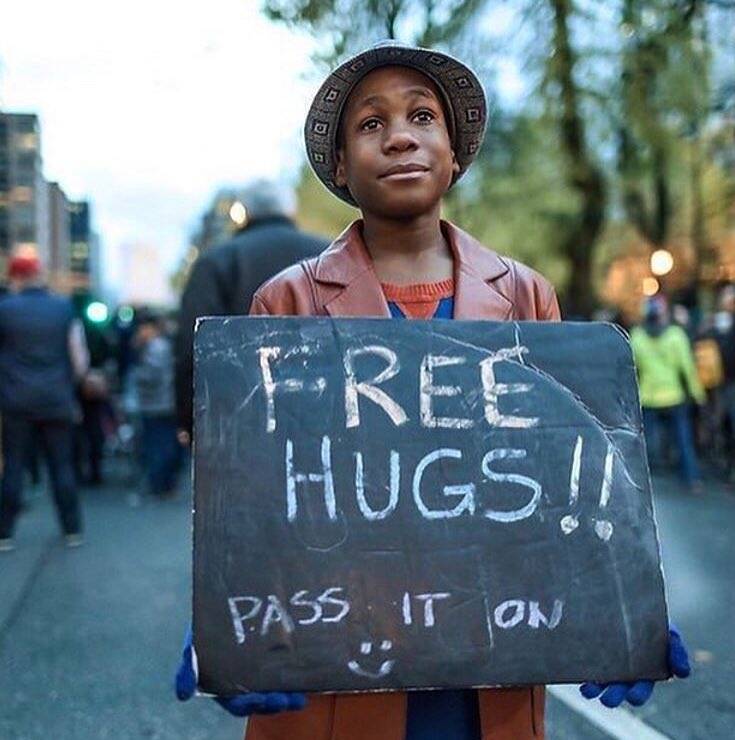 TwitterDevonte Hart’s photo made him famous in 2014. Then, he made headlines again in 2018 when he was killed in the Hart family crash.

In 2014, Devonte Hart captured the hearts of millions after a picture of him hugging a police officer during a Black Lives Matter protest in Portland, Oregon, went viral.

The Devonte Hart photo was indeed captivating. It featured a young Black boy in tears embracing a white police officer amid racial unrest. But then, four years later, he was killed in a murder-suicide orchestrated by his adoptive mother.

In 2018, Hart’s whole family was driven off a 100-foot cliff in California by their intoxicated matriarch. During the investigation of his death, allegations of years of abuse by his parents, a white lesbian couple, came to light. This evidence begged the question, could Devonte Hart’s death have been avoided?

Though his body was never found, Devonte Hart was declared dead. This is his tragic story.

Devonte Hart Had A Difficult Childhood 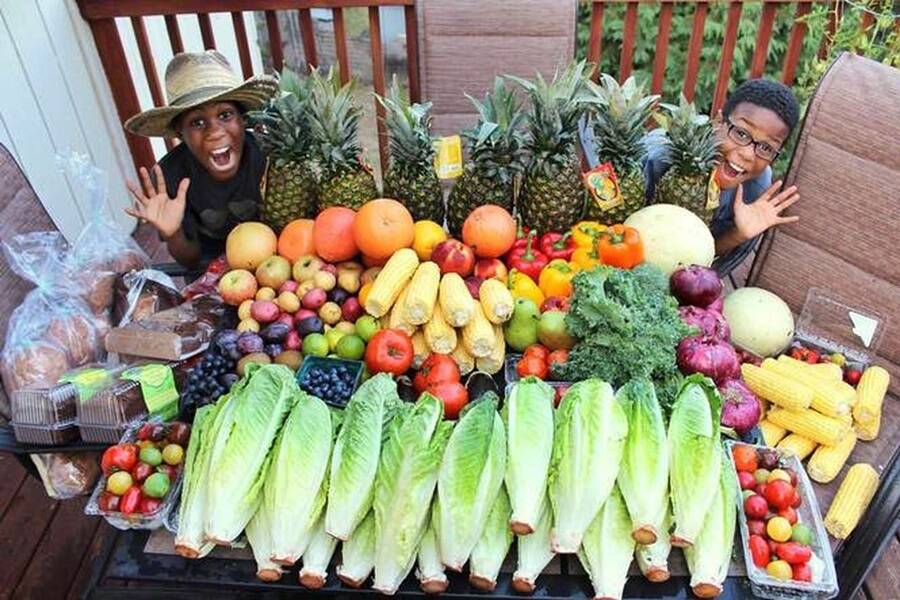 Facebook Devonte (left) and his brother Jeremiah pose with a bounty of food. His adoptive parents allegedly punished the children by starving them.

Before his hopeful adoption spiraled into a cycle of abuse, Devonte Hart experienced a rough childhood in Texas. He was the second of four siblings; Dontay, the eldest, Jeremiah, and Ciera.

His biological mother struggled with an addiction to cocaine, and as a result, she gave up her parental rights in 2006. The siblings were placed under the care of an aunt, but then removed after a caseworker found their mother babysitting the children while their aunt was at work.

Although the children’s aunt fought to keep them, it was too late. Devonte, Jeremiah, and Ciera were adopted in 2008 by Jennifer and Sarah Hart, a white couple from Minnesota. Dontay was left behind and forced into the state’s child welfare system, instead.

“That was the last little hope I had in my life, you know? I had that hope that I was gonna see my little brothers again; one day we gonna kick it,” Dontay said after hearing the news of his siblings’ tragic deaths in 2018. “I used to cry sometimes thinking what we could be doing, growing up.” 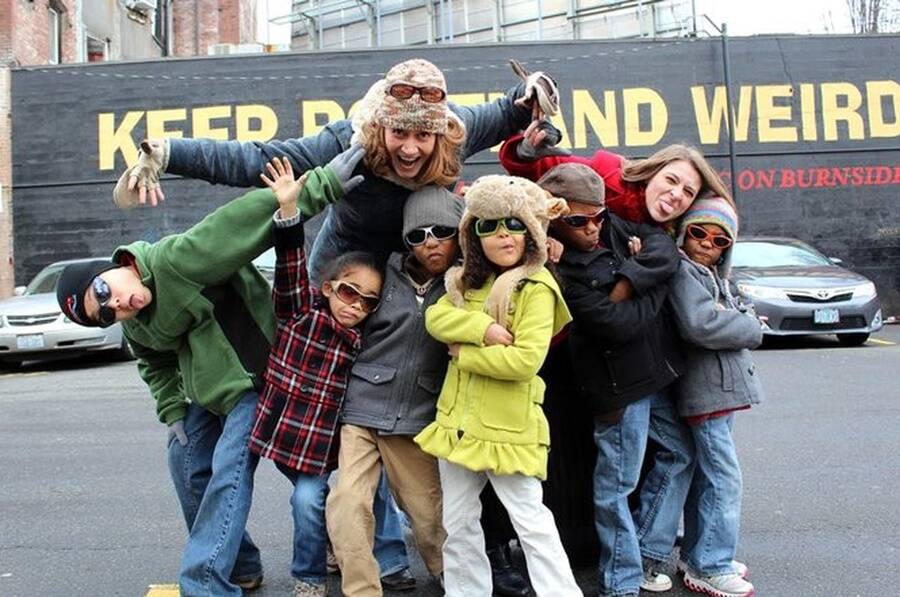 Facebook On social media, Jennifer Hart portrayed the family as a fun and happy bunch.

Devonte and his siblings joined an already large family. Jennifer and Sarah Hart had adopted another set of siblings — Markis, Hannah, and Abigail — in 2006.

The family of eight frequently traveled to music festivals across the country. Devonte Hart often held a sign that read “free hugs” and wore a zebra bodysuit.

“His first Saturday Market: Ends up in the Portland newspaper,” Jennifer Hart wrote on Facebook, where she frequently shared the family’s activities, in 2013. “This kid. His dancing. His smile and Free Hugs. His love of life. Contagious.” 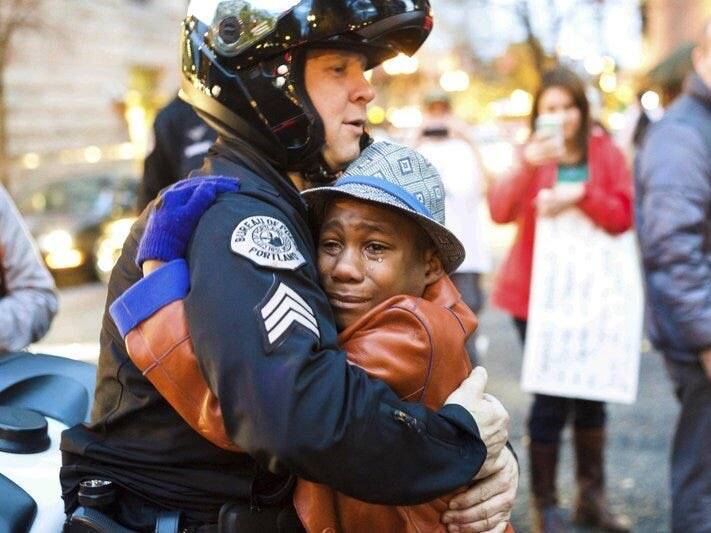 TwitterThis is the now-famous photo of Devonte Hart tearfully hugging a cop during a protest in 2014.

Later that year Devonte Hart’s photo from the Portland demonstrations went viral. It was a hopeful image, taken amid protests over the police shooting of Black teenager Michael Brown.

Jennifer Hart wrote more about her family as Black Lives Matter protests swept the country, “I’ve been struggling with the colorblindness I’m surrounded by in my circle(s) of friends. My children are black.”

But what the family posted on social media obscured a disturbing truth. According to people who knew the family, their home life was filled with emotional and physical abuse. The children were reportedly “scared to death of Jen,” had to raise their hands before they spoke, and were punished for laughing at the dinner table.

The children complained on multiple occasions to their public school teachers in Minnesota — and then Woodland, Washington when they moved — that they were starving. Jennifer and Sarah would allegedly withhold food from them as punishment.

The children were worryingly thin. Nusheen Bakhtiar, a close friend of Jennifer’s, recalled once mistaking Hannah, then 14, for seven or eight years old.

Jennifer claimed that the children were thin because of their biological families. She maintained they had been starved and abused before she adopted them and that it had affected their growth.

Hart also claimed that Devonte Hart was born with “drugs pumping through his newly born body” and that, by the time he was four, he had been “shot at,” an account that pushed racist stereotypes about poor Black families and was denied by a lawyer for Devonte Hart’s aunt. 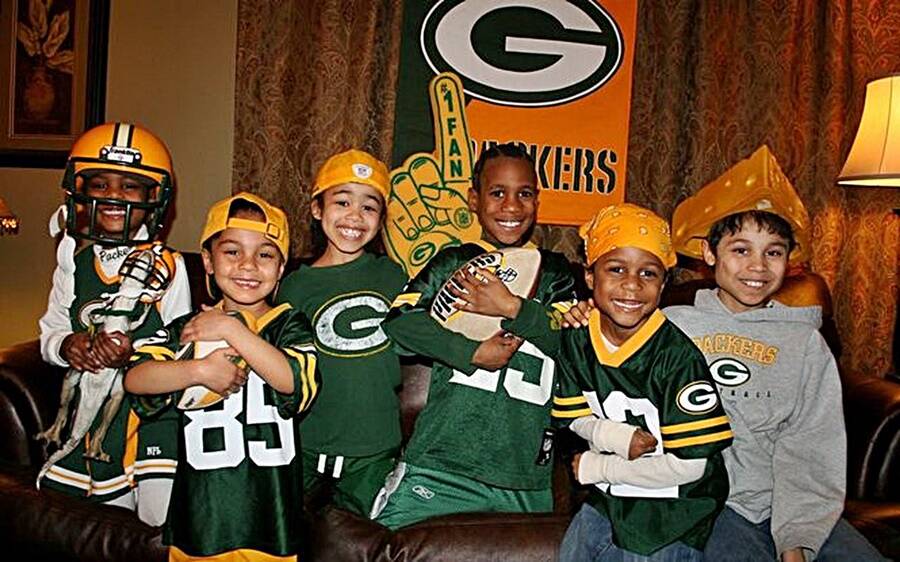 Authorities were met with a gruesome scene as the bodies of Jennifer, Sarah, and three of their adopted children, Markis, Abigail, and Jeremiah, were found in the car. The other three children, including Devonte, had been ejected from the vehicle.

Eventually, investigators found the remains of Ciera and Hannah, but Devonte Hart was never recovered and was declared dead in 2019. He was 15 at the time.

Jennifer Hart’s motive remains unknown, but authorities discovered that her blood-alcohol levels exceeded the legal limit. Authorities also found that Sarah Hart and at least one of the children had Benadryl in their systems. Damningly, internet searches on Sarah Hart’s phone included questions like: “What over the counter medications can you take to overdose?” and “Is death by drowning relatively painless?”

Given this evidence, it appears that the Hart family crash had been deliberate, and investigators believed that Jennifer got herself drunk in order to build up the courage to kill them all. 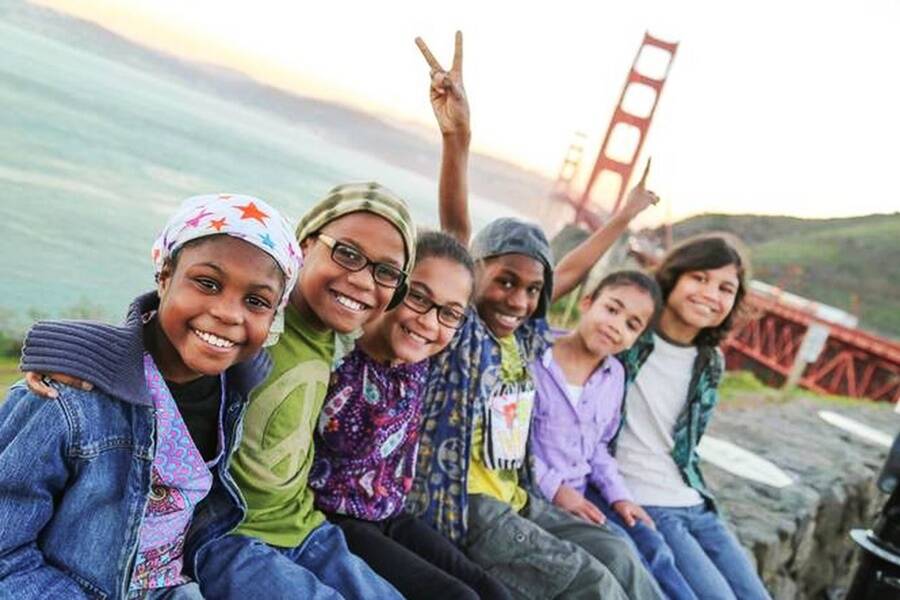 FacebookInvestigators spent more than a year trying recover the remains of all the Hart children. They never found Devonte.

Some of those who knew the Harts believe that Jennifer had committed the murder-suicide because of the child abuse reports that followed her. As one investigator put it: “My feeling is based on talking to witnesses that they felt if they couldn’t have those kids, no one was going to have those kids.”

Could The Hart Family Murders Have Been Prevented? 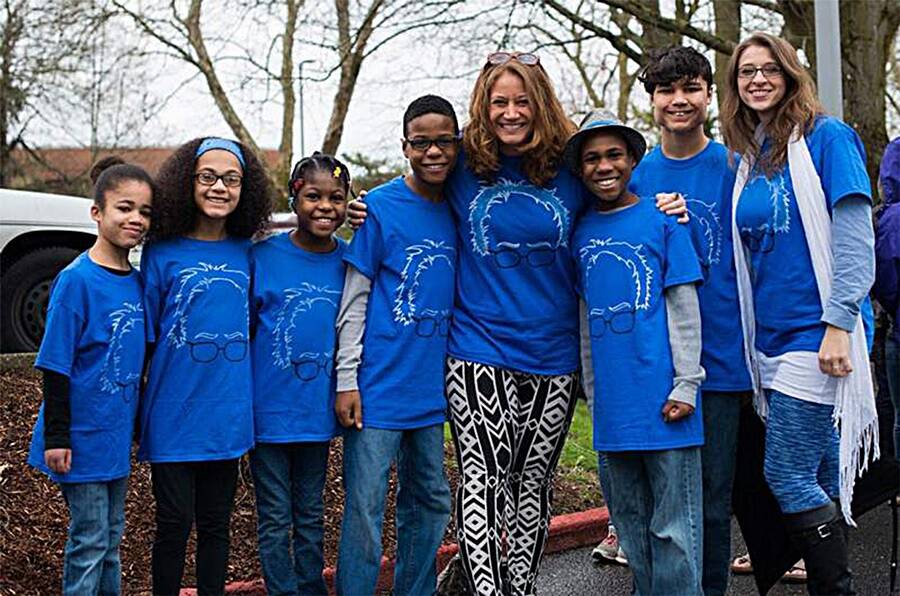 FacebookDevonte Hart’s photo made brought attention to his dysfunctional mothers, who were investigated multiple times for child abuse before the Hart family crash.

In part because of Devonte Hart’s photo, which went viral, the Hart family murders received a lot of attention, and subsequent media reports revealed a disturbingly long history of child abuse in the Hart household.

Within a decade, the family had lived in three different states, including Minnesota, Oregon, and Washington. Each move was preceded by child abuse allegations. In fact, Minnesota Child Welfare received six reports of abuse or neglect from concerned observers. In 2010, Abigail told a teacher at school that she had “owies” on her tummy and back and said, “Mom hit me,” over a penny that Jennifer and Sarah had found in her pocket.

In 2011, Hannah told her school nurse that she hadn’t eaten. Later, Jennifer allegedly became upset and shoved a banana and nuts into the child’s mouth. Her wife, Sarah, pled guilty to a domestic assault charge in Minnesota, telling authorities that she got out of control while spanking her daughter.

The couple agreed to in-home therapy and counseling, but Devonte Hart and his siblings were pulled out of school shortly after. 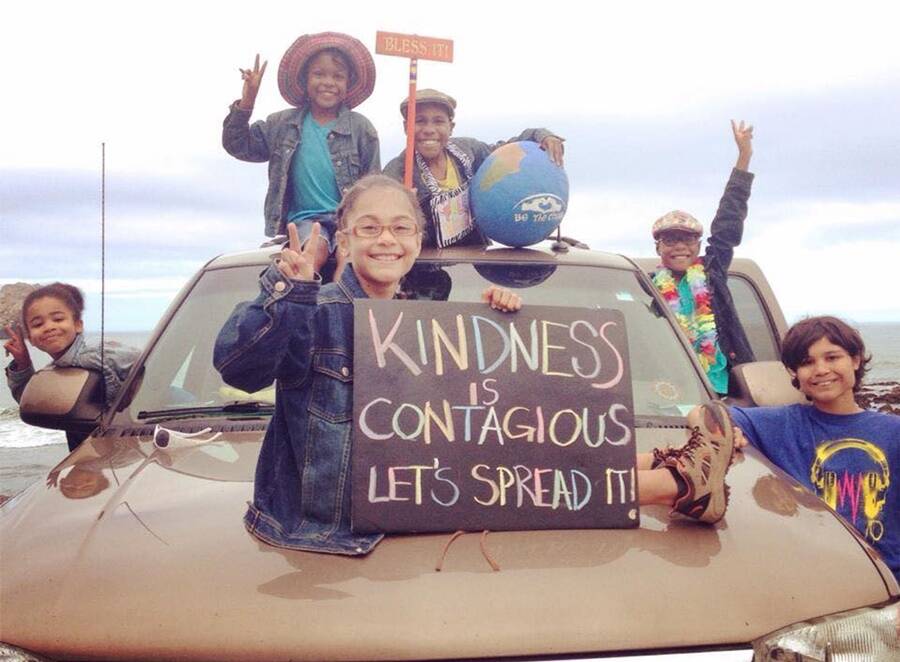 FacebookDue to the history of abuse allegations, it seems as though the Hart family murders could have been prevented.

Then, after uncovering the prior abuse allegations, Portland child welfare workers investigated the Hart family. Although they uncovered some disturbing details, Portland authorities were “unable to determine” if Sarah and Jennifer Hart were really guilty of neglect.

According to Bruce and Dana DeKalb, their neighbors in Washington, Devonte Hart snuck to their house to ask for food. They also alleged that Hannah rang their doorbell at 1:00 a.m. and said that her parents were abusive and racist. Eventually, the DeKalb couple reported the incidents to child welfare services, and authorities tried to reach the Harts twice.

Ultimately, the Hart family murder happened just a few days after one of the child welfare visits.

Devonte Hart’s biological mother, Sherry Davis, has been overwhelmed by the tragedy and injustice in her son’s death. Though they were taken from her for their own safety, her kids, she said, were given “to monsters.”

Now that you’ve learned about the tragic death of Devonte Hart in the Hart family crash, read about how Xavier Dupont De Ligonnès went from respected nobleman to family murder suspect. Then, go inside the horrific case of the Atlanta child murders.