Inside The Dieppe Raid, The Catastrophic Invasion Of France That Helped The Allies Plan For D-Day

On August 19, 1942, British and Canadian troops launched the Dieppe raid in hopes of taking a German-occupied port in northern France — but the results were calamitous. 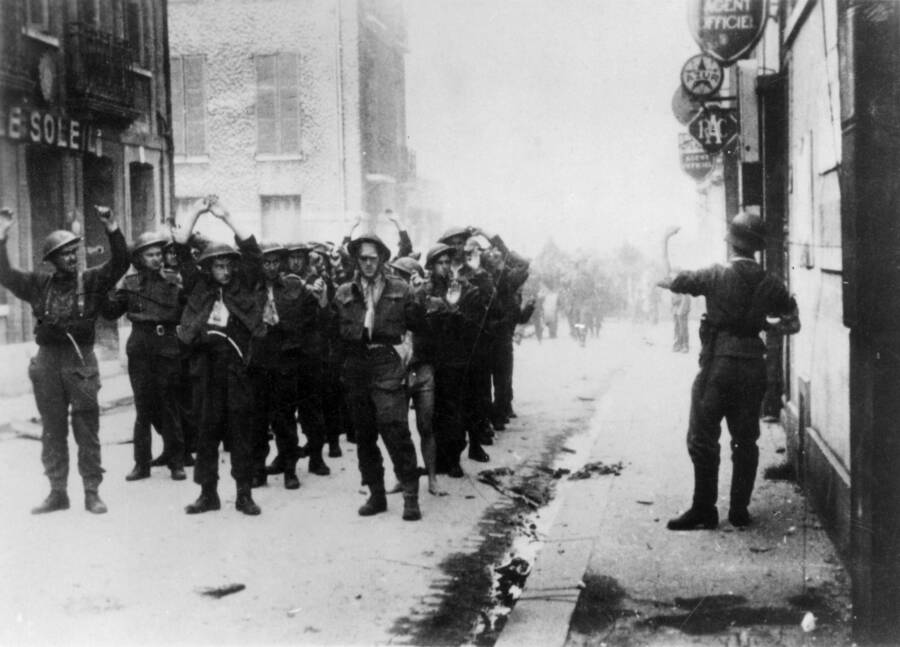 In early 1942, there were growing pleas for the Allies to invade Nazi Europe and open a second front. The response was the Dieppe raid, which took place on Aug. 19, 1942. Canadian and British forces launched an ambitious invasion in northern France to test German defenses. It ended tragically.

To the south, in northern Africa, the British army repeatedly advanced and retreated against the Germans. As fresh troops poured into Britain, plans for American landings in Africa to help their British allies were hatched.

But the Soviets insisted on more action on the Western front to ease German military pressure away from the east. Reacting to Russian pleas for help, the British began planning to strike the French coast.

The Purpose Of The Dieppe Raid 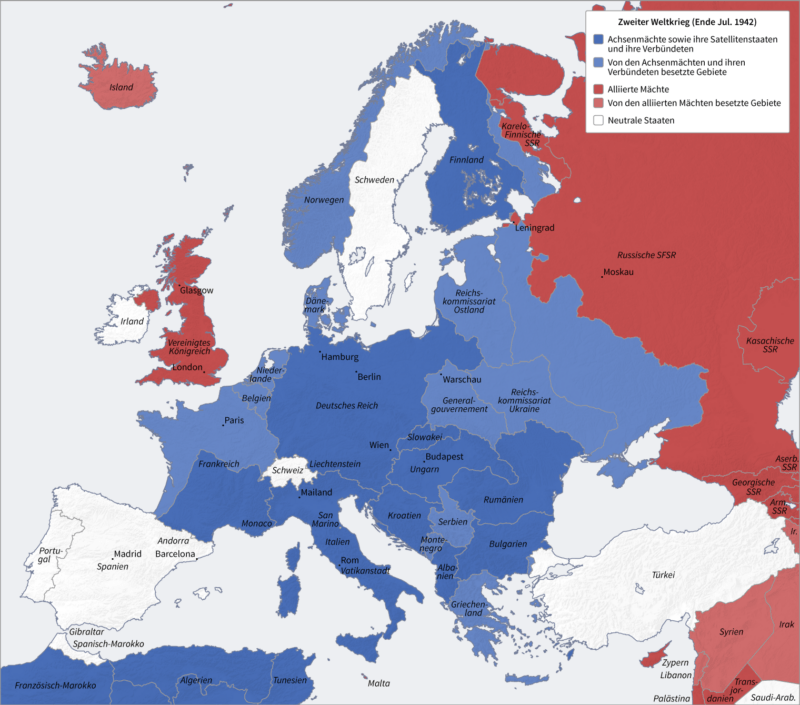 In 1942, the Allies were not ready for a full-scale invasion. “Fortress Europe” under Germany looked secure. The Americans wanted to establish a new front in Western Europe soon. But the British were hesitant. They preferred to focus on the weaker German positions in Africa and Italy.

The Allies compromised. They agreed to deploy forces to harass the Germans in Western Europe. Targets included enemy buildings, equipment, and supplies. The main reason for the action was to distract German attention away from the Russian front.

A smaller operation into France would have other benefits for the Allies. One objective was to assess Germany’s response to an amphibious assault for future invasion plans. A second objective was to gather further intelligence on the enemy. Furthermore, along with satisfying Soviet demands, a successful attack would boost Allied morale.

Finally, there is evidence that the Dieppe raid and beach invasion itself was meant to be a distraction so that a small team of British special forces could seize a new version of the Nazis’ Enigma coding machine from German military headquarters at Dieppe.

In all respects, however, the Dieppe raid would fail.

Who Was Responsible For The Dieppe Raid? 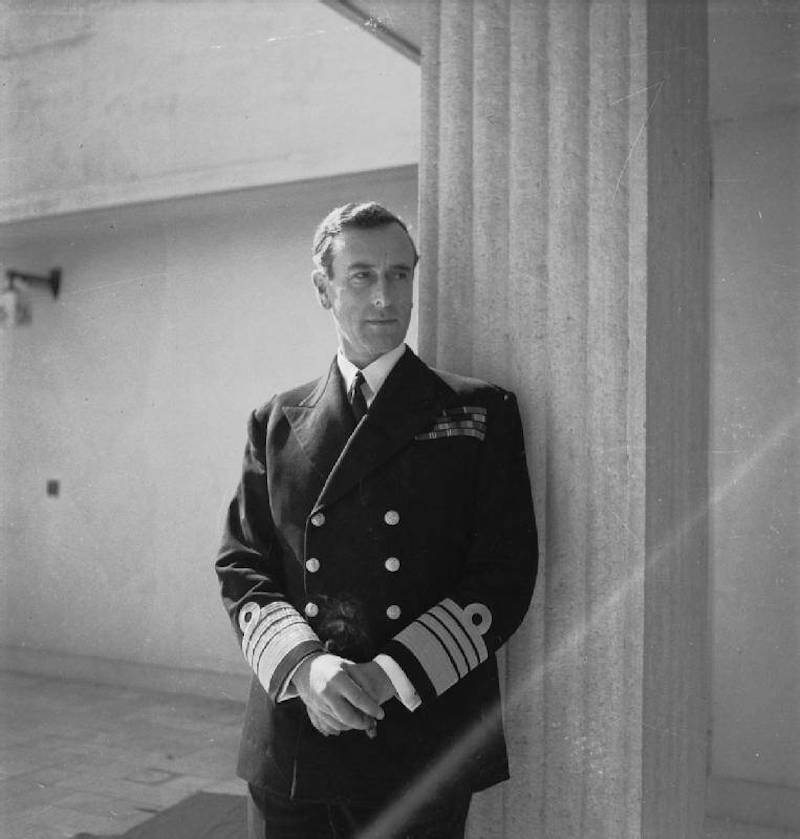 Lord Louis Mountbatten conceived the idea for the Dieppe raid. Mountbatten was British Chief of Combined Operations and a prominent member of the royal family. Assisting Mountbatten, General Bernard Montgomery hashed out details of the assault.

Intending to do it with complete surprise, the plan kept bombing of German defenses minimal until the ground attack was underway. The bulk of troops would land at the port of Dieppe. And the German gun batteries on cliffs positioned on either side of the town were to be taken by smaller special forces units.

But in August, when the weather was better, the British dusted off the plan, making slight changes and renaming it Operation Jubilee. 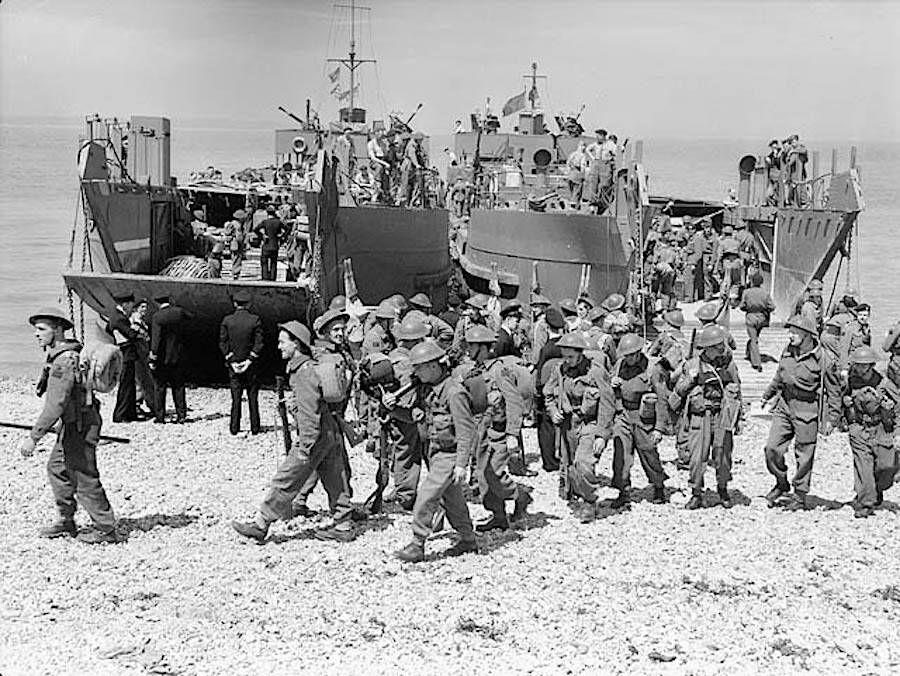 Canadian Department of National Defence Library and ArchivesSoldiers from the Royal Canadian Army Medical Corps during the final rehearsal in England for the Dieppe raid, August 1942.

Since Great Britain had declared on Germany in September 1939, the main purpose of Canadian troops until then was to protect the vulnerable island from Nazi invasion. However, they hadn’t seen any real military action for almost three years. Senior Canadian commanders begged for their soldiers to be involved in active combat in the upcoming offensive.

The Allies sent more than 6,000 military personnel into the operation. Some 5,000 of them were Canadian troops, led by Major-General J.H. Roberts. Right before the raid, Roberts told his troops “Don’t worry men, it’ll be a piece of cake.”

Supporting the large Canadian contingent were about 1,000 British troops and 50 U.S. Army Rangers. This was the first American land fighting in Europe during World War II. Eight British destroyers provided naval support. There were also many smaller landing craft. Significantly, tanks would be the lead weapon used in battle. 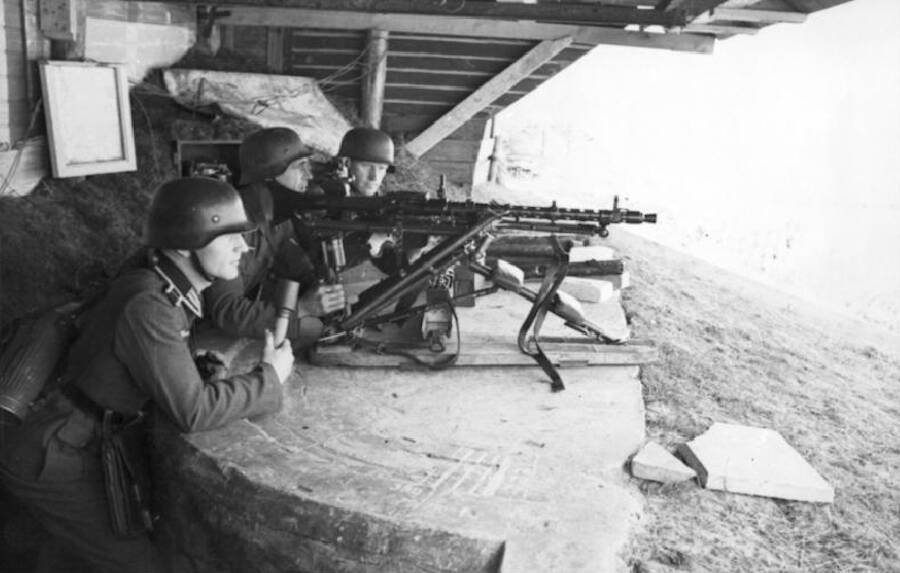 Meanwhile, the Germans sat entrenched in occupied France. The possibility of invading the United Kingdom had passed, due to solid British air defenses and the arrival of American forces. German strategy in western Europe focused on keeping the Allies off the continent.

Luftwaffe bases were also close, ready to defend the coast by air. The Nazis had the advantage of Dieppe sandwiched between large cliffs with good views of the town below, and they dug gun batteries deep into the headlands. 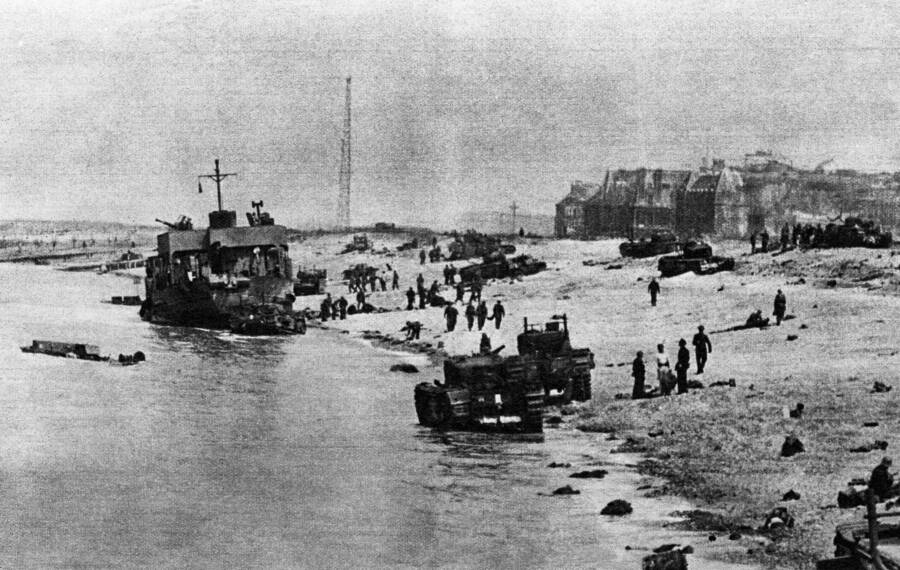 In the early morning of Aug. 19, 1942, in darkness, Allied ships crossed the English Channel and the Dieppe raid began. German patrols spotted some vessels. Lost was any chance of surprise.

Intelligence reports underestimated the heavy firepower available to the entrenched Germans. The Allies met intense gunfire all around. The Germans pinned down the Canadians.

Almost 30 tanks arrived on shore but small, loose pebbles on the beach made it hard to advance. The Allies appeared unaware that the rocky beach would hamper tank movements.

Though their losses were heavy, some Canadian infantry did in fact manage to get to to the town of Dieppe. By then, however, they were under constant fire and exhausted. The few who got into town were unable to overtake German positions and tanks could not push past concrete barriers.

Commanders ordered a retreat and evacuation. The raid on Dieppe lasted nine hours and was over by mid-day.

Why Was The Dieppe Raid A Failure? 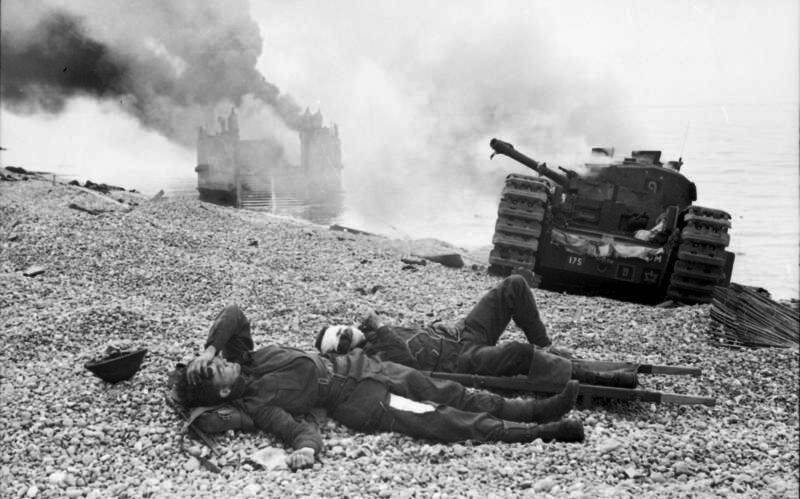 The casualties were heavy. Of the 5,000 Canadians sent into battle, 3,367 were either killed, wounded, or taken prisoner. The British lost 247 special forces. Six Army Rangers died in the fighting. The Germans had 591 casualties.

In the air, German fighters shot down 106 Allied aircraft. The Luftwaffe lost only 48. The Germans sank one British destroyer along with dozens of naval landing boats. The Enigma machine was not recovered. It was a humiliating defeat for the Allies.

The comments on Operation Jubilee were harsh. One criticism was that the Allies left too much planning to luck and surprise. Another was that attacking a port surrounded by high cliffs was bad strategy.

The Allies lacked preparation operating tanks on a pebbled beach. Finally, Mountbatten, creator of the raid, took heat as unqualified for the military position.

How The Dieppe Raid Paved The Way For Normandy 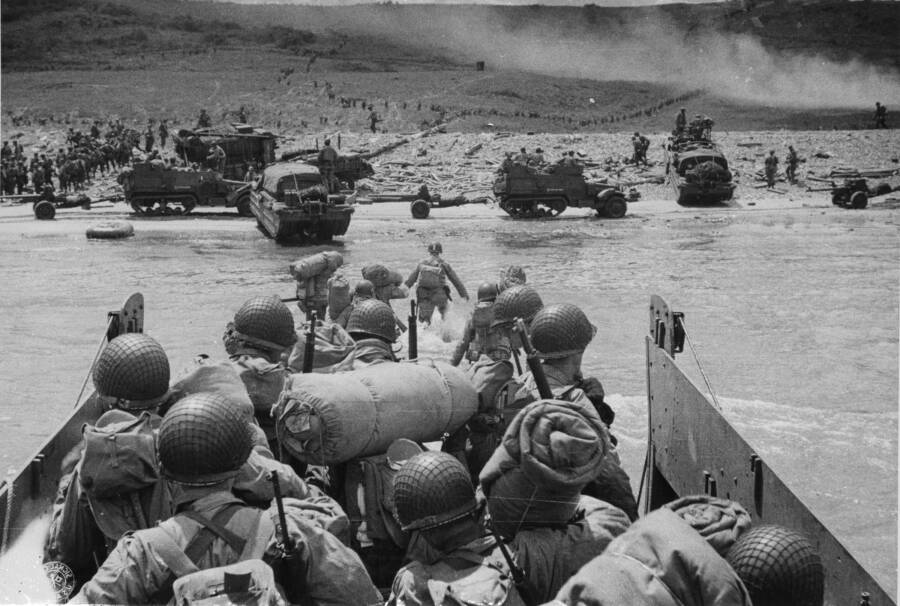 The legacy of the Dieppe raid remains a divided issue for historians. Was it an important and necessary trial to the triumphant D-Day landings at Normandy two years later? Or was it an ill-planned and deadly failure? The answer may be both.

Likely the best decision for the Allies at the time was to cancel the attack. However, if the Allies developed better planning and strategy, Operation Jubilee could have been a successful mission.

Still, the Dieppe raid taught the Allies important lessons that made D-Day work in 1944.. One realization was the risk of reliance on tanks during amphibious assaults. Another was the importance of air and naval superiority that became the foundation of later invasion plans.

And finally, the Dieppe raid highlighted the significance of softening enemy defenses through heavy bombardment before an attack. All of these lessons would prove crucial to the success of the invasion of Normandy less than two years later on June 6, 1944.

After learning about the failed Dieppe raid of 1942, check out 31 of the most fascinating, little-known facts about World War II. Then, Take a look through these incredible photos from D-Day that bring the Normandy invasion to life.