A closer look at one of the most disastrously sexist products ever, the 1955 Dodge La Femme.

The year was 1955, and post-war America was “moving on up” to the suburbs. With the working man driving into the city on a daily basis and families having considerably larger bank balances, many began to consider purchasing a second car.

Aware of the emerging two-car trend, Dodge Motor Company designed an apparently “female friendly” version of the Royal Lancer hardtop known as the 1955 Dodge La Femme. Painted up in “Heather Rose” and “Sapphire White” and complete with pink rosebud upholstery, the “La Femme” certainly was a vision in gender stereotyping. Along with the hyper-feminine car features, the Dodge La Femme package included a driver’s accessory pack that featured a rain cape, rain bonnet, and umbrella — plus a pink, calf-skin leather purse which contained a powder compact, comb, lipstick case, a lighter, and cigarette case. 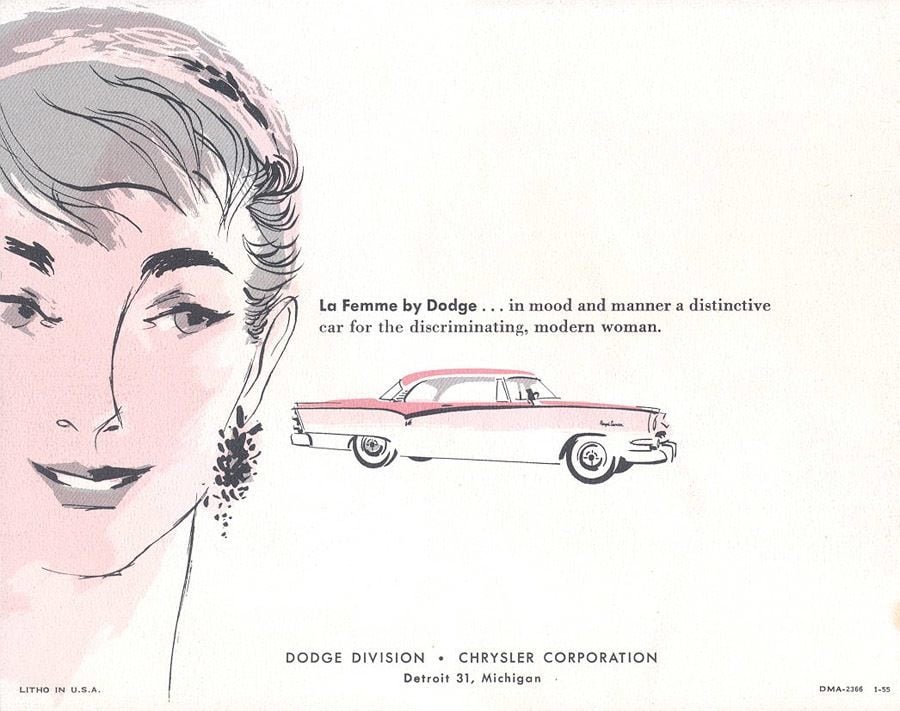 The car was for a “discriminating” and “modern” woman. 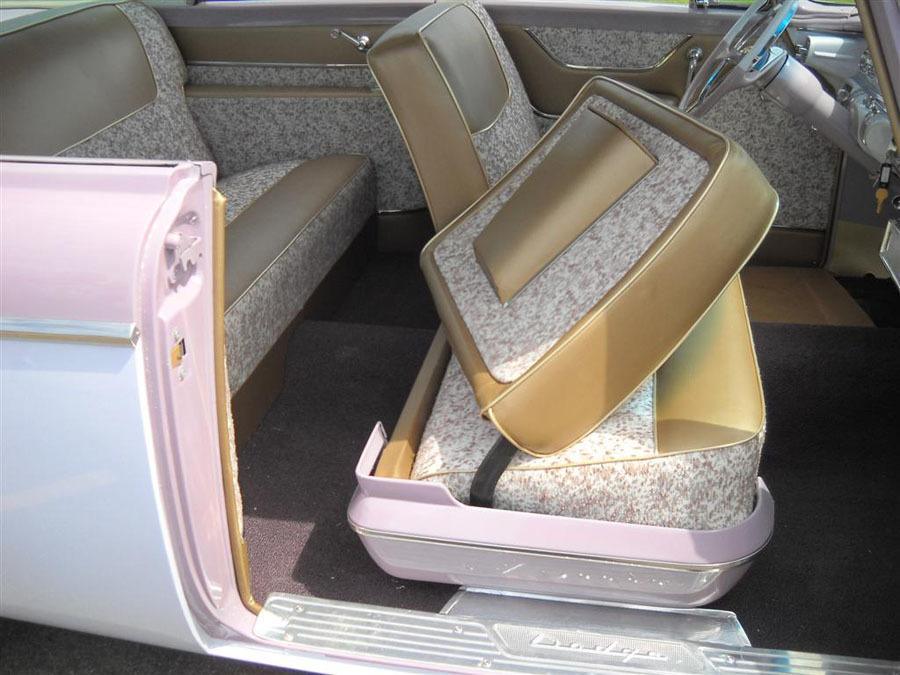 A view of the car’s interior. Image Source: Forward Look

Despite employing rhetoric such as “her majesty” when describing who would drive the car, women failed to flock to Dodge’s 1955 model. Cars sat unsold in showrooms, collecting dust.

Dodge was undeterred, however — presumably thinking that if they just tried a little harder, injecting a little more pink into the pepto bismol-colored mess, they would succeed. Thus the car company sent letters out to showrooms touting the model’s stunning success and rolled out the 1956 La Femme soon after.

In the 1956 model, Dodge installed custom “La Femme exclusive” pink/burgundy two-toned carpet, and the equally feminine “Misty Orchid” and “Regal Orchid” exclusive lavender paint. Even the steering wheel got the two-tone treatment. Breaking away from the previous year’s gender norms, Dodge dropped the matching purse and its contents, and opted to sprinkle the headliner with gold flecks to match the gold emblems. 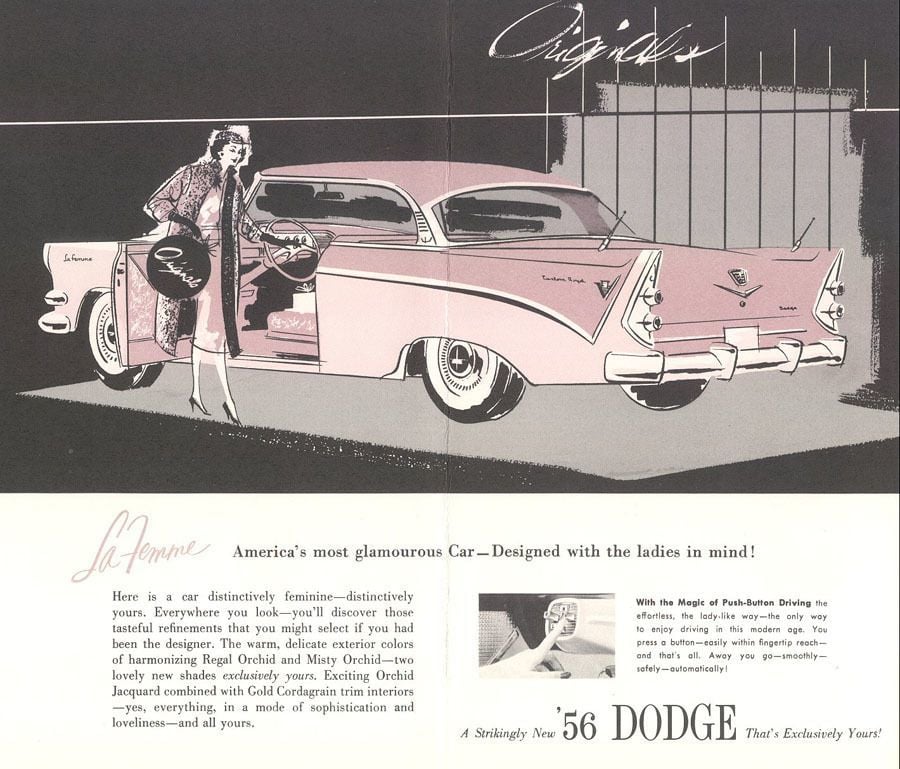 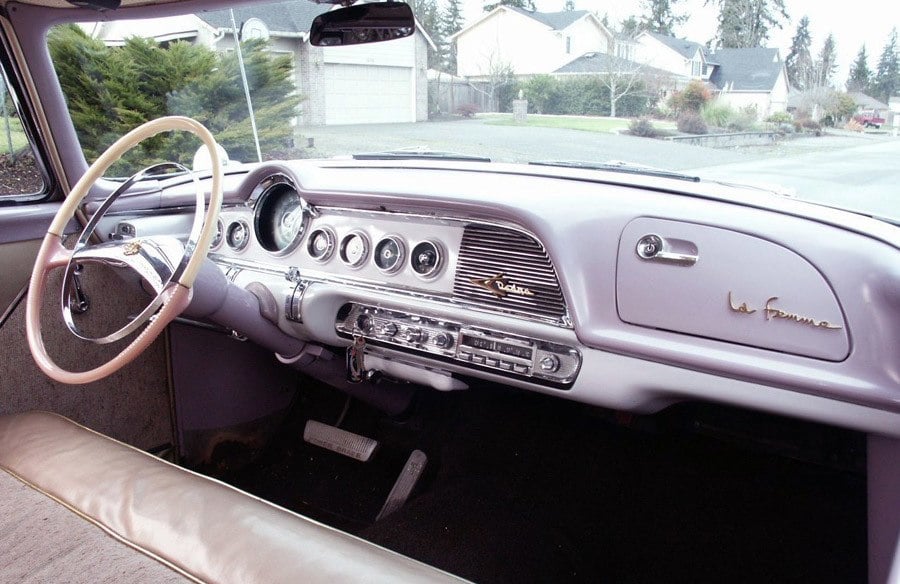 Still, the 1956 La Femme had few takers — less than 1,500 by most counts. By 1957, Dodge scrapped the idea altogether. Through failure comes knowledge, though: the femme flop has been credited with helping neutralize gender-specific marketing when it comes to substantial purchases like automobiles.