If the reports are true, animal rights groups can claim a small victory. 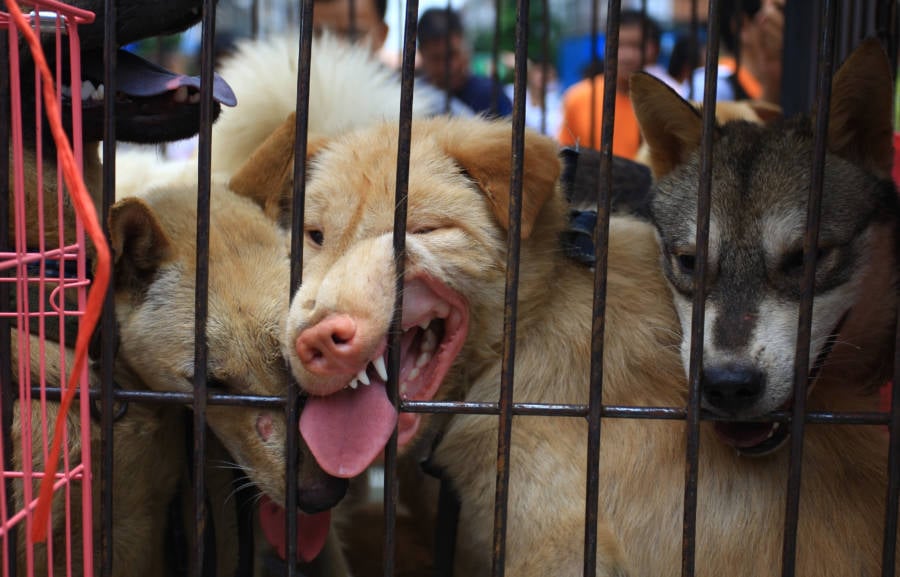 A ten-day dog meat-eating festival that sparks global outrage each year has reportedly been banned from selling dog meat.

Founded in 2010, the Lychee and Dog Meat Festival has led to the deaths of tens of thousands of dogs each year — many of which were strays or stolen pets.

“The government order to local dog meat traders announcing this change comes just weeks before the annual summer festival, where traders deliver frightened and dehydrated dogs by the thousands for local butchers to kill and dismember,” a press release from Humane Society International and Duo Duo Animal Welfare Project stated.

The Chinese city of Yulin has yet to confirm these reports, but the measure would be a logical response to the 11 million-signature petition opposing the festival, which rights groups delivered to the government last year.

Eating the creatures much of the world considers “man’s best friend” is nothing new in Eastern Asia.

The tradition stretches back thousands of years to the Neolithic age, when animals were first bred as livestock. But, contrary to what some stereotypes suggest, it isn’t an everyday kind of thing in modern times.

“Judging by the sporadic waves of outrage about dog-eating in China, you might think it was one of the pillars of the Chinese diet,” Fuchsia Dunlop, a Chinese food expert, wrote in TIME. “Actually, however, the consumption of dog meat is extremely marginal: it’s seldom seen in markets and on restaurant menus, and most Chinese people eat it rarely, if at all.”

Experts estimate that approximately 10 million dogs are eaten each year. That’s compared to 716 million pigs per year and 48 million cows.

And those numbers are shrinking as an increase in pet ownership has been observed in the country’s youth.

A 2016 poll showed that almost 70% of the Chinese population claims to never have eaten dog meat and 52% of citizens want the trade banned completely.

“It’s embarrassing to us that the world wrongly believes that the brutally cruel Yulin festival is part of Chinese culture,” Qin Xiaona, director of the Capital Animal Welfare Association charity, told Xinhua news. “It isn’t.”

Though the new regulations banning dog meat sales are temporary and only apply to the festival, activists hope they are indicative of a broader legal change across the country.

Cats are also eaten at the festival, but — unfortunately for cat people — the rights groups are unsure if the ban will protect them as well.

Next, take a closer look inside China’s dog meat eating festival. Then, read about the vegan animal rights activist who was denied a passport for being too annoying.