Flaming whiskey ran through Dublin's Liberties district in 1875 after a liquor warehouse caught fire. Though the blaze nearly burned the city down, the only people who died were those that drank too much flaming booze. 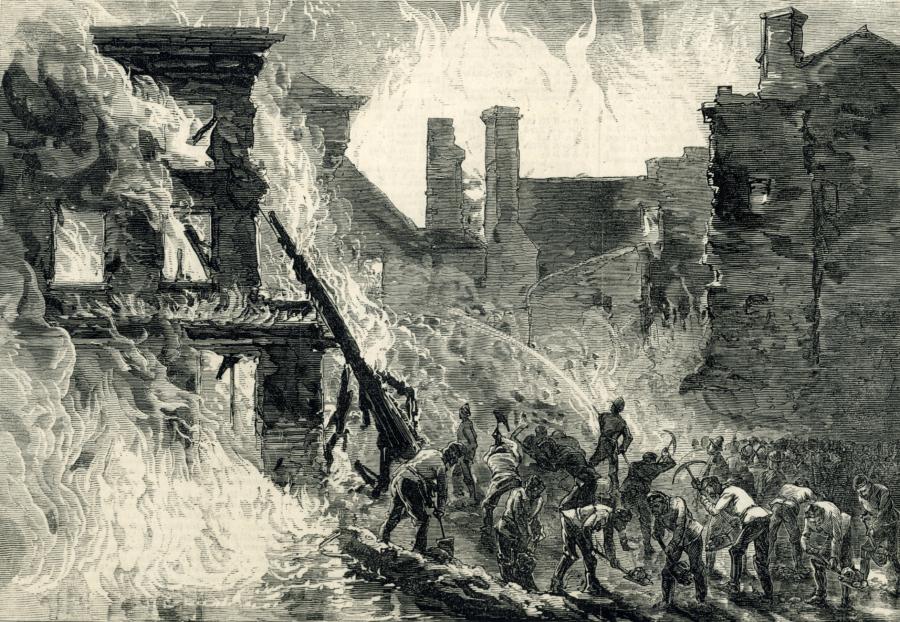 Dublin Fire BrigadeRemarkably, all 13 deaths of the Dublin Whiskey Fire in 1875 were caused by alcohol poisoning rather than the blaze itself.

The Dublin Whiskey Fire of 1875, one of the most destructive blazes in the city’s history, saw burning alcohol pouring through the streets of the Liberties, Dublin’s central district, in a quickly spreading inferno.

The Dublin Fire Brigade was helpless as water would only spread the fire more quickly, and they were reduced to using sand and manure to try to rivers of burning booze from spreading deeper into the city.

True to the stereotype, some hard-nosed Dubliners even tried drinking up the free-flowing booze right out of the gutter — fire be damned. In the end, casualties ranged between four and 13, with immense property damage creating a pretty alarming hellscape in Ireland’s capital city.

The Irish are famous for many things: their literary contributions, the Irish Land War, and the violent quest for independence from British colonial rule just to name a few. The remarkable little island birthed incredible figures from George Bernard Shaw and William Butler Yeats to Bobby Sands, Sinéad O’Connor, and Michael Collins.

Unfortunately, the island has also nurtured a reputation for hazardous alcohol consumption that’s only recently begun to turn around. According to The Irish Examiner, a 2018 survey found that 74 percent of citizens believe drinking excessively is “just a part of Irish culture.” 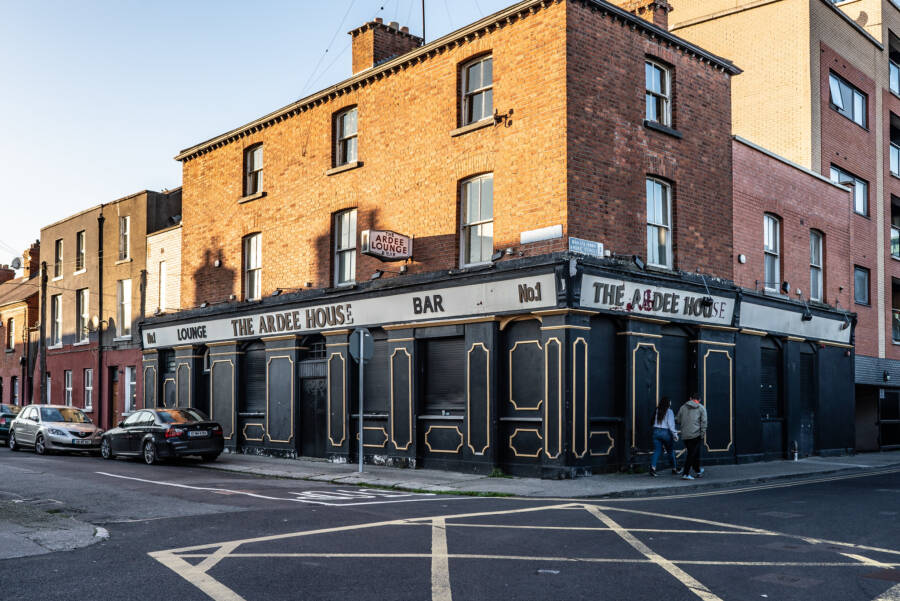 FlickrThe quiet streets and undamaged facade of today’s Ardee Bar and Lounge would have you think twice that there was once a river of fire and panicking pigs flooding the neighborhood.

The research surveyed 1,000 adults and posited that 73 percent of hazardous drinkers are male, with nearly half of them aged under 34. On the other hand, these deeply instilled habits are slowly changing for the better.

According to The Guardian, alcohol consumption fell by a quarter from 2005 to 2019 — from 14.2 liters of pure alcohol per person to 10.9 liters. A 2016 survey by the European School Survey Project on Alcohol and Other Drugs showed a stark drop in underage drinking, as well.

In the 1800s, of course, physical wellbeing wasn’t as prioritized as having a raucously good time and getting munted. The Dublin Whiskey Fire in 1875 was certainly evidence of that, as numerous onlookers sidelined the dangers of the blaze for the chances of gulping up some cost-free whiskey.

The Dublin Whiskey Fire Of 1875

According to Atlas Obscura, it remains largely unclear just how the 1800 puncheons of whiskey and £2,000 worth of malt — equal to about £232,000 today — caught fire. What we do know is that the liquor immediately streamed through the streets entirely ablaze, panicking animals and city folk alike.

William Smith, one of the victims of the June 18, 1875 incident, was only 21 years old when he died. According to The Irish Times, the unmarried laborer and his friend John McGrane met on Bow Street around 10 p.m. when they heard about a terrifying fire enveloping the Liberties.

Naturally, the curious young friends thought it worth a look.

Earlier that day, all 5,000 barrels of whiskey and other spirits at Malone’s malt house were checked and accounted for. At 8 p.m., however, the alarm was raised. The fire rapidly spread, bursting open wooden casks of liquor which subsequently led to a burning river in the streets. 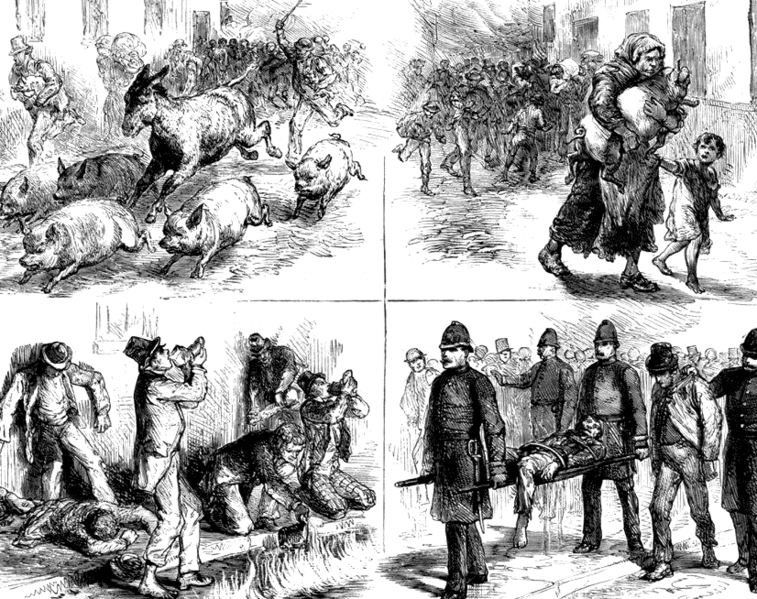 Wikimedia CommonsThese contemporary illustrations of the 1875 blaze depict just how chaotic the scene in Dublin’s Liberties really was.

When Smith and McGrane arrived, the stream was two feet wide and six inches deep — and was over 400 meters down on one side of Mill Street. With livestock being commonplace within the city at that time, the sound of squealing, terrified pigs running away made the sight all the more unnerving. The overwhelmed Dublin Fire Brigade, meanwhile, used walls of horse manure to contain the blaze.

Aftermath And Legacy Of The Dublin Whiskey Fire

As The Irish Times reported on June 21, 1875, “caps, porringers, and other vessels” were in huge demand to scoop up the free-flowing liquor. The paper also reported that “some fellows were observed to take off their boots and use them as drinking cups.”

“Crowds of people assembled, and took off their hats and boots to collect the whiskey, which ran in streams along the streets…Two corn-porters, named Healy and M’Nulty, were found in a lane off Cork-street, lying insensible, with their boots off, which they had evidently used to collect the liquor. There are many other persons in the hospital who are suffering from the same cause.” — The Illustrated London Times

As a result, eight comatose Dubliners were hauled to Meath Hospital while 12 were sent to Jervis Street Hospital, three to Stevens’ Hospital, and one to Mercer’s.

A tour of the Dublin Whiskey Fire sites by Storymap Dublin.

None of the 13 fatalities that night died as a result of the flames or smoke inhalation — it was alcohol poisoning that did them in. McGrane seemed to have gotten away with his life, while Smith was one of the unlucky baker’s dozen who died.

Today, the Ardee Lounge and Bar sits on the historical spot in Dublin.

With a progressive drinking culture that’s been changing for the better, it’s safe to say none would perish from alcohol during an inferno these days — no matter how much of God’s sweet nectar was barreling through the streets.

After learning about the Dublin Whiskey Fire of 1875, read about the Peshtigo Fire, the deadliest in American history. Next, learn about why Jonathan Swift wrote ‘A Modest Proposal.’