Eating Kids As A Solution To Food Shortages: Why One Famous Writer Once Proposed It In “A Modest Proposal”

After several attempts to instigate policies with parliament, Irish writer Jonathan Swift channeled his ire into A Modest Proposal, a satirical pamphlet that posited child-eating as the only viable solution to the country's famine. 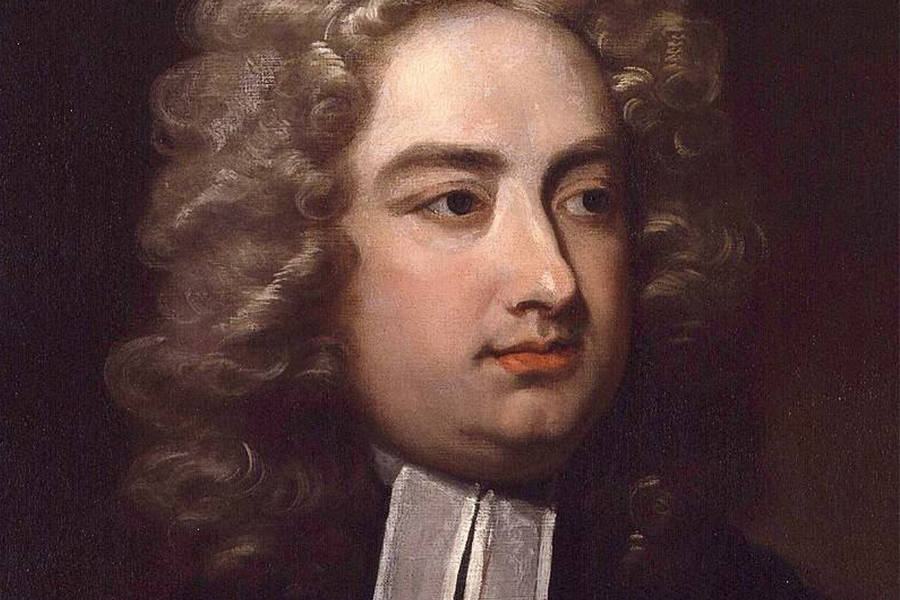 The country had been under England’s rule for almost 500 years, and economic and social conditions were deteriorating as a direct result of their rule. Trade restrictions had greatly hurt the economy and the lack of work led to rampant poverty and hunger. The sight of beggars in the streets, was a common sight. Overpopulation and overcrowding contributed to the dismal conditions, and there seemed to be little hope that things would improve.

Jonathan Swift was an Anglo-Irish writer, born in Dublin in 1667 to Anglican parents. Although he was part of the ruling class, by the early 1700s Swift had become very involved in Irish politics, and was particularly interested in pointing out how disastrously the unfair politics of the English were impacting the Irish people.

He made several appeals to Irish Parliament to put into place policies that would help the populace, but nothing ever came of them. Frustrated at the lack of progress, he turned to writing.

A Modest Proposal Is Proposed

In his most famous piece of satire, “A Modest Proposal For preventing the Children of Poor People From being a Burthen to Their Parents or Country, and For making them Beneficial to the Publick,” Swift called attention to the plight of the Irish by proposing an outlandish plan to help Ireland’s poor.

He begins A Modest Proposal by describing the sorry state of the majority of Ireland’s population in detailed terms, leading the reader to believe he has a compassionate solution in mind, thus making it even more shocking when he states his proposal:

“I have been assured by a very knowing American of my acquaintance in London, that a young healthy child well nursed, is, at a year old, a most delicious nourishing and wholesome food, whether stewed, roasted, baked, or boiled; and I make no doubt that it will equally serve in a fricassee, or a ragout.” 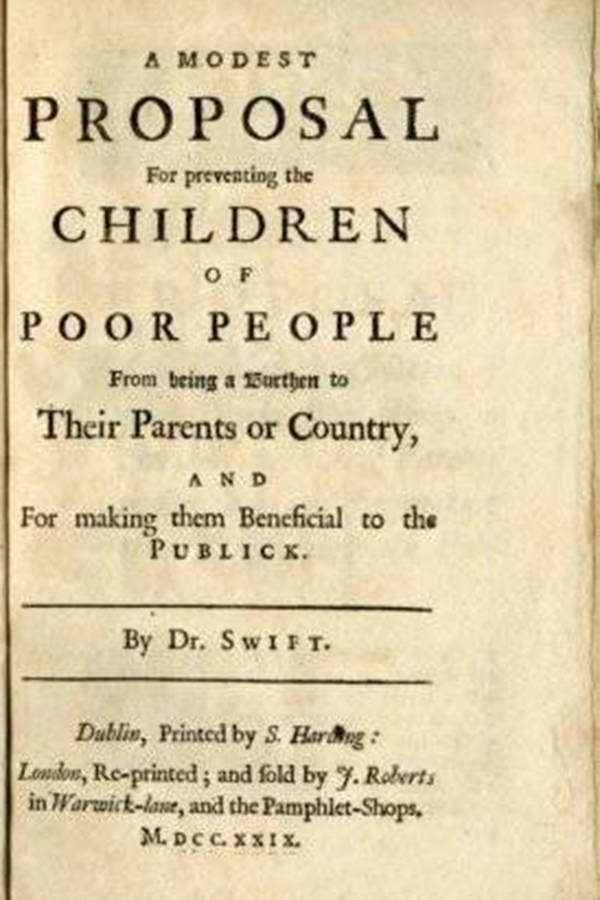 Swift wasted no time in calling out the wealthy landowners, whose unfair practices contributed to the Irish struggle, saying “I grant this food will be somewhat dear, and therefore very proper for landlords, who, as they have already devoured most of the parents, seem to have the best title to the children.”

Complicating the problem, Ireland at the time was a largely Roman Catholic country that was being ruled by an English Protestant minority. This contributed significantly to Ireland’s resentment towards English rule.

In A Modest Proposal, Swift called particular attention to this tension, saying that:

“Infant’s flesh will be in season throughout the year, but more plentiful in March, and a little before and after; for we are told by a grave author, an eminent French physician, that fish being a prolifick dyet, there are more children born in Roman Catholick countries about nine months after Lent, the markets will be more glutted than usual, because the number of Popish infants, is at least three to one in this kingdom, and therefore it will have one other collateral advantage, by lessening the number of Papists among us.”

By drawing attention to the large Roman Catholic population, Swift meant obviously parody the anti-Catholic sentiment that was rampant in England at the time.

He closed his argument by challenging politicians, saying:

“I desire those politicians who dislike my overture, and may perhaps be so bold to attempt an answer, that they will first ask the parents of these mortals, whether they would not at this day think it a great happiness to have been sold for food at a year old, in the manner I prescribe, and thereby have avoided such a perpetual scene of misfortunes, as they have since gone through, by the oppression of landlords, the impossibility of paying rent without money or trade, the want of common sustenance, with neither house nor cloaths to cover them from the inclemencies of the weather, and the most inevitable prospect of intailing the like, or greater miseries, upon their breed for ever.”

The Reception Of A Modest Proposal

Despite its shocking premise, the pamphlet did little to shock the public when it was first released. It was largely ignored by critics, and those who did read it recognized the absurdity of its argument and did not take it as a serious proposal.

Of course, Swift most likely never meant for it to be taken seriously by anyone.

But by making such a shocking and distasteful suggestion, he meant to call attention to the severity of the problem that was at hand. In doing so, he also cemented his place in history as the father of Western satire, a form that has been going strong ever since.

Next, check out the Kindlifresserbrunnen, the child-eating statue of Bern. Then, read about the dark side of these beloved children’s books.