Dudley "Mushmouth" Morton, a World War II submarine ace so named for his pronounced mouth, sank 19 enemy ships while commanding the submarine Wahoo in the Pacific.

With the red-lettered motto “shoot the sons of bitches” there was no mistaking Lieutenant Commander Dudley “Mush” Morton’s position toward Imperial Japan. He was one of the greatest stars of World War II’s Pacific Theater but was also a source of controversy with some historians accusing him of war crimes.

He was nonetheless regarded as one of the hardiest and most efficient American men on the high seas in the war. Mush Morton is largely considered one of the Pacific’s best submarine commanders in terms of ships sunk — the commander saw some 19 enemy ships taken down. 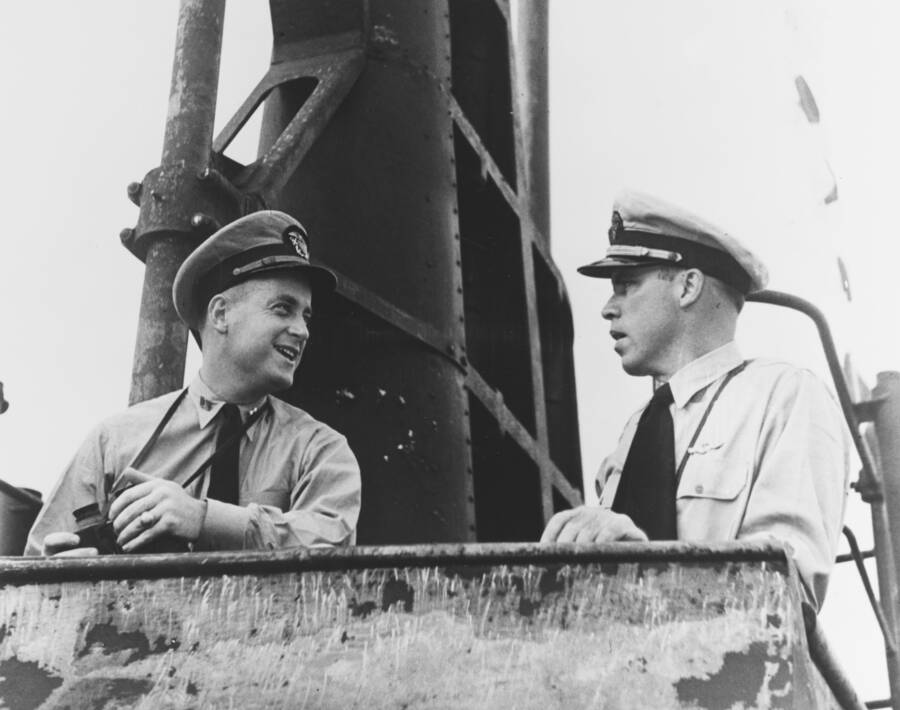 Born July 17, 1907, in Owensboro, Kentucky Dudley Morton moved to Miami, Florida as a teenager. He went to the U.S. Naval Academy to play football and starred as a varsity wrestler before graduating in 1930.

Morton was a physical man. His meaty paws could crush any hand offered to him in a handshake. His handsome face was dominated by a large square jaw. It is from the size of his mouth or his pronounced drawl that he earned the academy nickname of “Mushmouth,” later shortened to Mush.

Before World War II, Morton served on various warships and submarines including the U.S.S. R-5 (SS-82), of which he was in command from August 1940 to April 1942.

He was promoted to lieutenant commander that same year.

Meanwhile, the submarine Wahoo (SS-238), had a lackluster first war patrol. Under the red-haired and pale-faced Lieutenant Commander Marvin “Pinky” Kennedy, the vessel had a poor record. Kennedy was seemingly too timid for service and also alienated his men. His executive officer, Lieutenant Richard O’Kane was surprised when he learned that Kennedy had been reassigned for a second war patrol. He privately complained to headquarters, and the brass decided that it would be best to assign a Prospective Commanding Officer (PCO) to the Wahoo in order to support Kennedy. 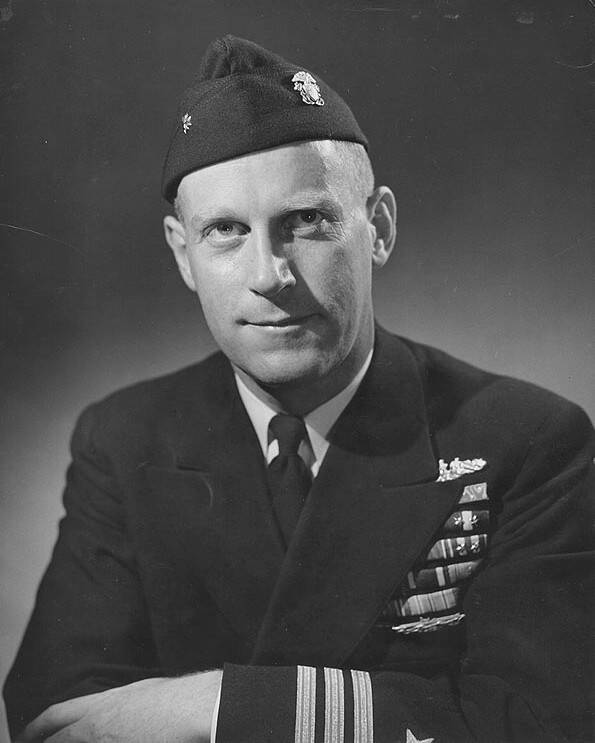 That PCO was none other than Dudley Walker Morton.

Morton exuded charisma – he told a good story and connected to those under him in a way that the aloof Pinky Kennedy could not. He bore relaxed authority so that even though he carried no airs, all obeyed him.

Even as PCO, Morton won over the love of the Wahoo’s crew so that after another lackluster performance on the submarine’s second war patrol, the men were happy when Kennedy was relieved of command and replaced by Morton on Dec. 12, 1942.

It probably only helped Morton’s case when he bitterly criticized Kennedy’s performance.

Before departing on the Wahoo’s third war patrol on Jan. 16, 1943, Morton made their purpose clear to the crew:

“Wahoo is expendable. Our job is to sink enemy shipping. We are going out there to search for Japs. Every smoke trace on the horizon, every contact on watch will be investigated. If it turns out to be the enemy, we will hunt him down and we will kill him.”

Morton gave the option to allow any man who didn’t want to follow him to leave without repercussion. None took up the offer. 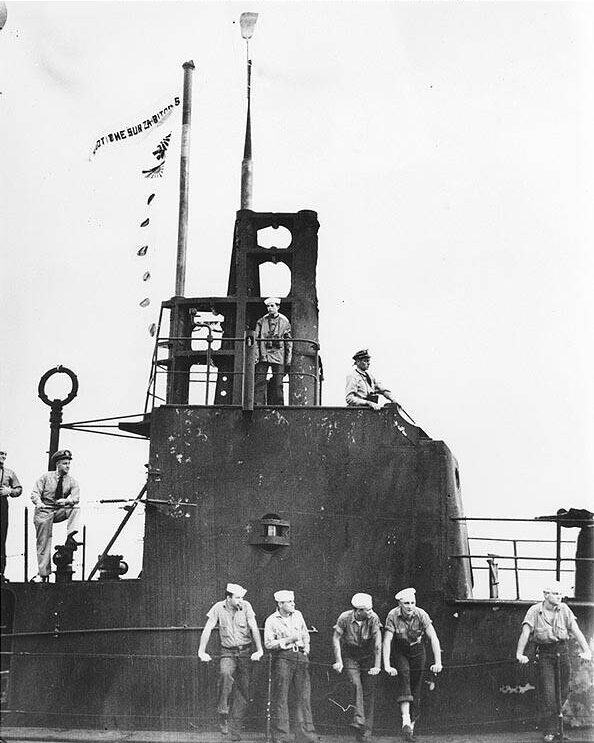 To reinforce his hatred toward the enemy, Morton distributed placards reading “Shoot the sons of bitches” to his crew. He also prominently posted a quote from General Leslie McNair aboard the submarine, “We must shoot to kill for our enemies have pointed the way to swifter and surer killing.”

Despite the bellicosity, the Wahoo departed Brisbane, Australia, with a happier tone than it had under Kennedy. Morton was lighthearted and jovial. He was going into chaos and war – which is where he loved to be.

The Wahoo’s mission was to head to the Caroline Islands and while en route, reconnoiter the Japanese-held harbor of Wewak on the coast of New Guinea.

Morton’s idea of reconnaissance was unorthodox. Typically, a submarine might come to a harbor mouth, raise its periscope, make notes, and head on its way. This was unacceptable to Morton.

When they arrived on Jan. 24, 1943, Morton ordered his men to take the submerged Wahoo right into the harbor. Some of the officers thought this foolish since it could trap the submarine in a shallow net. But Wewak was a wider harbor than most and soon enough they encountered the Japanese destroyer Harusame at anchor.

Destroyers were built to destroy submarines. Morton ordered an attack anyway. “We’ll take him by complete surprise,” he said. And they did.

All hands went to battle stations to set up the attack. O’Kane manned the periscope instead of Morton. By Morton’s reckoning, this unorthodox set up would allow him to concentrate on the tactical situation at hand.

As they were about ready to fire, the destroyer was alerted to the Wahoo’s presence. It steamed toward them. After frantic maneuvering, the Wahoo fired three torpedoes at the destroyer. All missed.

Quickly the Wahoo set up for and fired another shot, but this missed as well. The Harusame closed in on the men fast. Morton ordered a so-called “down-the-throat shot.” This was a theoretical tactic, never tried, which called for blasting the destroyer’s bow head-on. 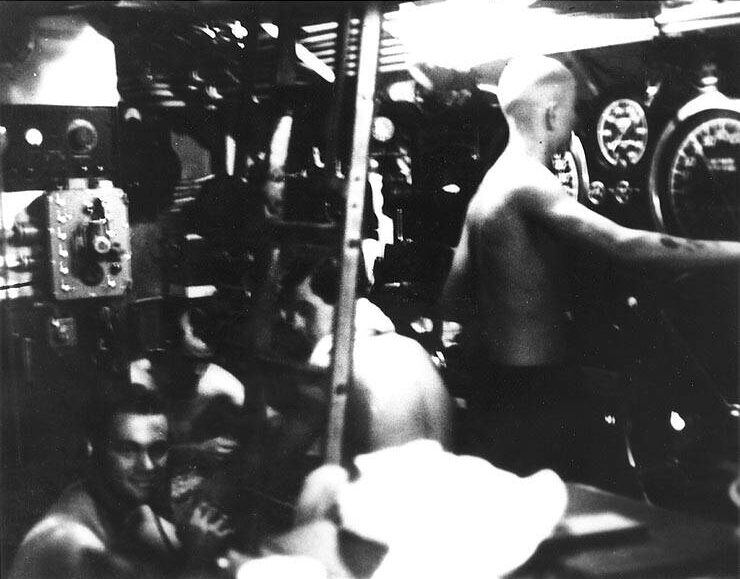 National ArchivesThe scene in the Wahoo’s control room the day after the sinking of Buyo Maru.

The idea was that firing head-on eliminated the worry of a target’s speed, but still only allowed for about a 20-foot window at which to aim. Morton fired a torpedo. It missed again. Then with the Harusame at 800 yards, the Wahoo shuddered as it loosed a sixth torpedo.

The Wahoo plunged to 90 feet and prepared for a depth charge attack. Soon enough, explosions rumbled through the water. Light bulbs aboard the Wahoo exploded. But there were no follow up blasts. Silence pervaded.

The Wahoo crept up to periscope depth and found the destroyer broken in two. Apparently, the destroyer had turned into the path of the sixth torpedo. It was broken amidships.

After a hot action, the results were impressive: two freighters, a tanker, and what was presumed to be a large troop transport had all been taken down. Morton reported on the successful attack on the transport, Buyo Maru, saying: “The explosion blew her midships section higher than a kite. Troops commenced jumping over the side like ants, off a hot plate.”

The water was filled with lifeboats from the transport. What happened next is a matter of controversy.

Mush Morton ordered the crew to man the deck guns. To his reasoning, any Japanese that made it ashore would put another American life at risk once they recovered and returned to war. Shooting at capsized soldiers was considered a war crime, but Morton and O’Kane claimed that they had only shot at the lifeboats.

They later added in their patrol report that the Japanese were shooting at them at the same time. But Morton’s own official patrol report stated that the Wahoo “surfaced to charge batteries and destroy the estimate twenty troop boats now in the water.”

There was neither mention of self-defense nor justification for the actions.

Other witnessed aboard the ship reported that Morton threatened to court-martial those who would not load the guns. In yet another reported exchange the Wahoo’s crew found a Japanese sailor playing possum at the surface. When a crewman asked Morton if they should take the man prisoner, the captain said, “I don’t want the son of a bitch! Do you?” The soldier was then allegedly shot. 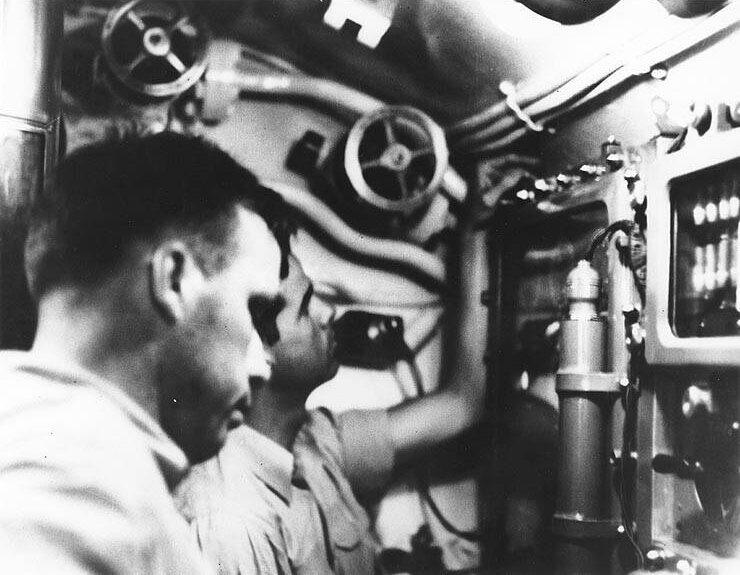 National ArchivesMorton in Wahoo’s conning tower during her attack on a Japanese convoy north of New Guinea, Jan. 26, 1943. Several ships, including the controversial sinking of Buyo Maru, were destroyed in this action.

The episode illustrated not only Morton’s utter contempt for the enemy but represented the larger sentiment of hatred felt by Americans toward the Japanese after Pearl Harbor.

It is estimated that of the 1,126 men aboard the Buyo Maru transport ship that day, 282 were killed by the Wahoo and of these, only 87 were Japanese – the rest were Indian prisoners of war that Morton could not have known about.

Perhaps this could have been overlooked if other incidents similar to this hadn’t happened in the Wahoo’s subsequent patrols.

There is still debate over whether or not Mush Morton was justified to shoot at the lifeboats.

If the United States had been on the losing side of the war, Mush Morton may have been tried as a war criminal. However, he neither was disciplined nor was there an investigation. Nor was he apologetic. In fact, Morton was commended by his superior, Admiral Charles Lockwood.

Morton commented to a reporter, “That’s the only way we’ll ever lick ’em. The Japs fight hard and use all the tricks and we’ve got to shoot, shoot, shoot.”

Some believe that these incidents prevented Morton from receiving the Medal of Honor.

Lost With All Hands

After the sinking of the Buyo Maru, Morton was out of torpedoes, but this did not stop his determination to make war on the Japanese.

On the way back to Pearl Harbor they sighted a small convoy. The Wahoo gave chase, hoping to sink some with their deck gun. However, the tables turned when an undetected destroyer came to the convoy’s rescue. The Wahoo fled. Morton sent the following message to headquarters:

Morton returned to Pearl Harbor with a broom lashed to the masthead indicating a clean sweep. He was lionized and his feats did much to revitalize the sagging morale of the American submarine force at that time following the attack on Pearl Harbor. 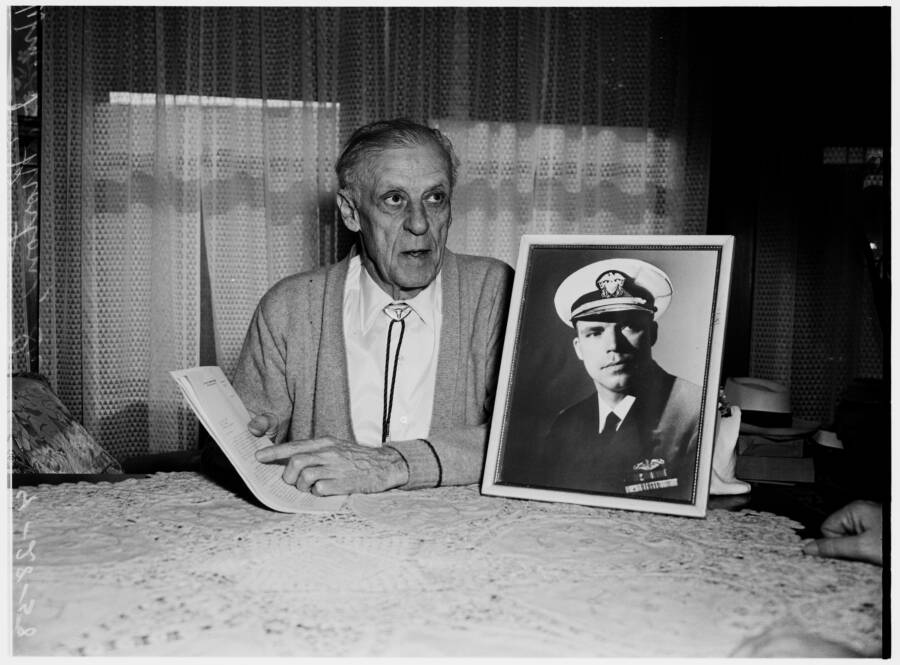 Mortons father, William D. Morton Senior is photographed beside a portrait of his deceased son, who will have a destroyer named after him. April 1958.

Morton went on to command Wahoo on its fourth, fifth, sixth, and seventh war patrols. In total, Morton sank 19 ships totaling 50,000 tons, making him the third most successful submarine commander in the U.S. Fleet.

Only Slade Cutter and Richard O’Kane, who left the Wahoo after its fifth patrol to assume his own command, had better records. In fact, O’Kane was the supreme submarine ace of the war and won the Medal of Honor.

Perhaps Morton would have beat all of them, except that the Wahoo was destroyed by antisubmarine aircraft in the Sea of Japan during its seventh patrol on Oct. 11, 1943.

Morton and all hands were lost. It was only in 2006 that the wreck of the Wahoo was discovered in over 200 feet of water.

Dudley “Mush” Morton was awarded four Navy Crosses and the Army Distinguished Service Cross for his service. The Wahoo won the vaunted Presidential Unit Citation, and despite any controversy over his actions, has remained largely regarded as a distinguished addition to the World War II Naval effort.

After this look at submarine ace Dudley Mush Morton, check out some more aces of World War II, including Richard Bong, the American flying ace. Then, go behind enemy lines and explore the all-time German flying ace, Erich Hartmann.