The Story Of Serial Killer Edmund Kemper, Whose Story Is Almost Too Gross To Be Real

At a young age, Edmund Kemper decapitated his sisters' dolls and even stalked his second-grade teacher with a bayonet.

Though recently revisited in the Netflix series Mindhunters, one of the most heinous and often overlooked serial killers of American history is “The Co-ed Killer,” Edmund Kemper.

At six feet nine inches and with an IQ of 145, Edmund Kemper was an intimidating killer in every sense of the word. As is the case with many serial killers, Kemper’s murderous impulse can be traced back to his childhood.

The Troubled Childhood Of Edmund Kemper

Ed Kemper was born in Burbank, California, in 1948 and he presented troubling behavior from an early age. His family, however, was ill-equipped to deal with his problems.

His father for one, Edmund Emil Kemper II, was a World War II veteran in a loveless and damaging marriage with Clarnell Elizabeth Kemper.

Clarnell was an alcoholic, possibly suffering from borderline personality disorder. The Kemper’s father, who had worked on nuclear bomb tests in the Pacific, once said that “suicide missions in wartime and the later atomic bomb testings were nothing compared to living with Clarnell.”

Clarnell would berate her husband for what she perceived as his “menial” job and refused to coddle her son for fear that it would “turn him gay.”

At the same time, Kemper began to display dark fantasies relating to sexuality and death. He would decapitate his sister’s dolls in elaborate rites and even stalked his second-grade teacher outside her house, carrying his father’s bayonet.

In 1957, Kemper’s father left the family, leaving him in the company of just his mother and two sisters. His mother feared Kemper, who already stood 6’4″ at the age of 15, and made him sleep in a locked basement for fear that he would harm his sisters.

She would regularly berate and insult him, telling the boy that no woman would ever love him.

At the age of 14, Kemper ran away from his mother’s house to live with his father in California.

However, his father had remarried and sent Kemper to live with his grandparents on their ranch. There Kemper transferred much of his rage for his parents towards these his new stewards. 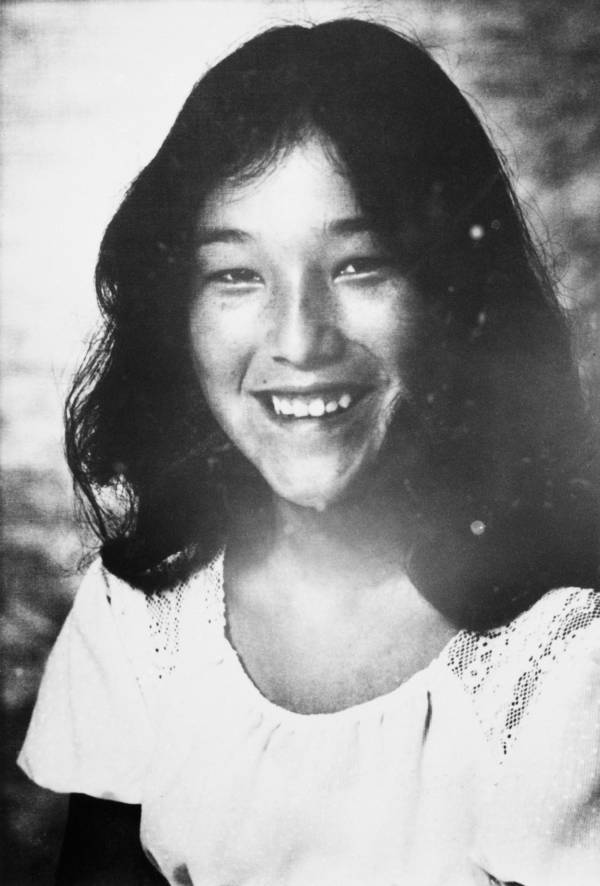 After getting into an argument with his grandmother, Edmund Kemper shot her in the head with his grandfather’s .22 caliber rifle.

He then killed his grandfather as he was walking up the driveway towards the house so, according to Kemper, he would not have to find out his wife was dead.

Ed Kemper then turned himself into the police after calling his mother and asking what to do. He was consequently then sent to the criminally insane unit of Atascadero State Hospital. It was there that he was first tested for his IQ and learned of his high score.

On Kemper’s 21st birthday in 1969, he was finally released from Atascadero back into the care of his mother, who was now working as an administrative assistant at the University of California, Santa Cruz.

Public DomainDetectives dig in Kemper’s yard in search of remains.

He still had to check in with probation psychologists, but knew what to say to them from his experiences at Atascadero and was considered a low risk.

After a year, Kemper began living in places across Northern California, periodically returning to his mother’s house in Aptos when he had run out of money.

It was at this time that Kemper embarked on his infamous murder spree where he would pick up young women who were hitchhiking and murder them, have sex with their corpses, and dismember their bodies.

An interview with Edmund Kemper, who speaks coolly and plainspokenly about his murders. Afterward, the interviewer said he ‘liked’ the Co-Ed Killer.

The Murders Of The Co-Ed Killer

His first victims were Mary Ann Pesce and Anita Luchessa, two Fresno State students he encountered while driving around Berkley, California. Kemper brought the women to a wooded area nearby where he originally intended to rape them, but panicked and ended up stabbing and choking the two women to death.

He then stuffed their bodies in his trunk and drove over to his house in Alameda where he was living at the time. On the way, a police officer stopped him for a broken taillight but did not search the car.

Once home, Kemper raped the bodies before dismembering them, placing the pieces of the bodies in plastic bags, and disposing of them in a ravine near Loma Prieta Mountain.

Kemper continued this formula of murder on his next victim, 15-year-old Korean dance student Aiko Koo. During this encounter, Kemper accidentally locked himself out of his car but was able to persuade Koo to let him back in. 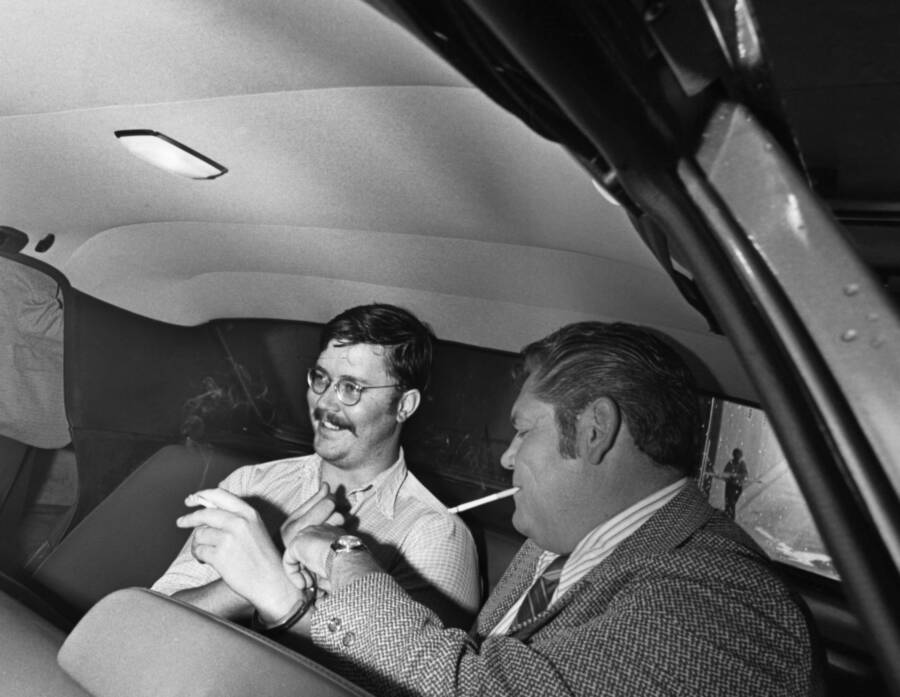 Bettmann Archive/Getty ImagesEdmund Kemper enjoys a smoke with a detective. The Co-Ed Killer’s amicable attitude fooled almost everyone and had even his investigators enjoying his company.

By early 1973, Kemper had run out of funds and moved back in with his mother at her home on the UC Santa Cruz campus. There he continued his killings, murdering three more college students he picked up around the campus.

He even buried one of the dismembered heads of his victims in his mother’s garden and left it facing upward toward her bedroom. According to him, he did this because his mother “always wanted people to look up to her.”

Then, on April 20, 1973, Kemper’s murders reached their natural culmination when he bludgeoned his mother to death with a claw hammer while she slept in her bed. Kemper then decapitated her and raped her severed head before placing it on a shelf and using it as a dartboard.

He cut out her tongue and larynx and placed them in the garbage disposal. The mechanism couldn’t break up the tissue, however, and spit the mother’s remains back into the sink. “That seemed appropriate,” Kemper later reported, “as much as she’d bitched and screamed and yelled at me over so many years.”

Public DomainKemper joyfully shows cops where he buried the bodies of his victims.

Kemper then invited his mother’s best friend over to the house before murdering her and stealing her car. He drove to Colorado, but after not hearing any news of the murders, ended up calling the police from a phone booth to confess to murdering his mother.

The police did not take the call seriously prompting Kemper to admit to all of the murders he had committed to get their attention. When asked why he turned himself in, Kemper said that “the original purpose was gone…I just said to hell with it and called it all off.”

He was arrested and convicted of eight counts of first-degree murder. Kemper attempted suicide twice and even requested the death penalty, but failed on all counts and was given seven consecutive life sentences instead.

Mindhunter And Life Behind Bars 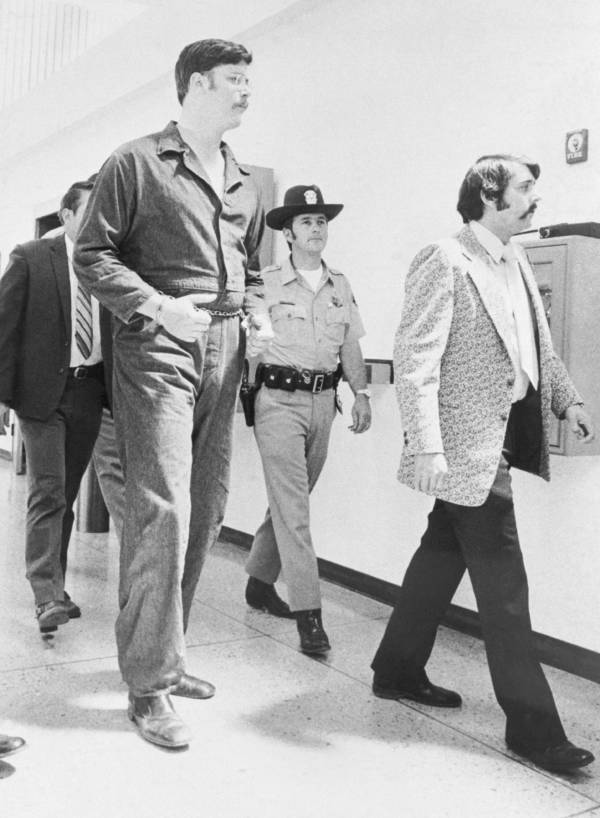 Kemper was featured in season one of Netflix’s true-crime series, Mindhunter.

Edmund Kemper was imprisoned at the California Medical Facility alongside Herbert Mullin and Charles Manson, where he still resides to this day. While in prison, Kemper willingly participated in a number of interviews from reporters and law enforcement. 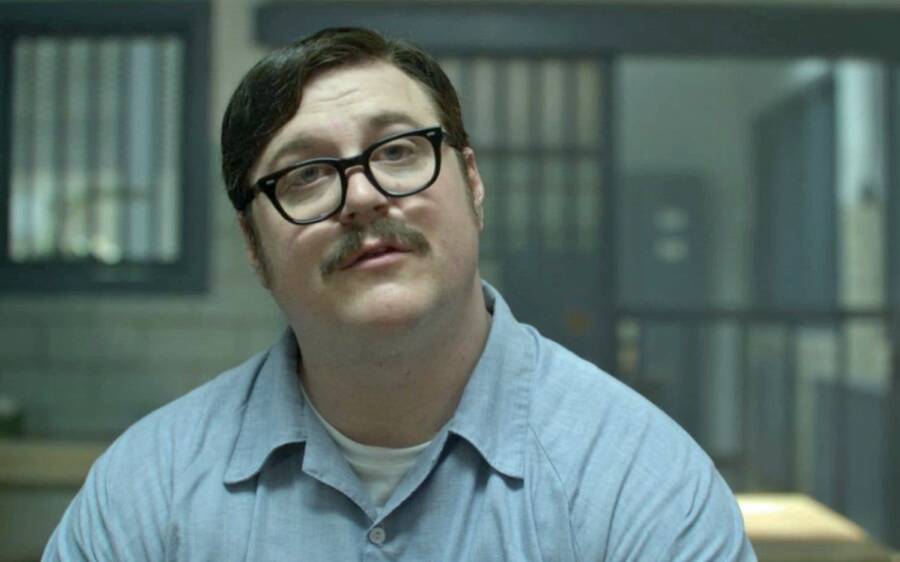 NetflixEd Kemper as portrayed on the Netflix series Mindhunter.

As detailed in Mindhunter, Edmund Kemper’s testimony as to his state of mind during his murders was integral to law enforcement’s understanding of the mind of serial killers.

See the real Edmund Kemper beside the actor who meticulously portrayed him on the TV series.

Edmund Kemper became a model prisoner at the California Medical Facility, where he is in charge of scheduling other inmates’ appointments with psychiatrists and has spent over 5,000 hours narrating books on tape for the blind.

Now that you’ve read about Edmund Kemper, learn the sad, gruesome story of the most cold-blooded serial killer in history, Carl Panzram. Then, learn the true stories of the characters behind Mindhunter.