Indian Elephant Wrangler Crushed To Death After He Beats The Animal, Slips, And It Sits Down On Him

The entire incident was captured by security cameras and is currently being investigated. 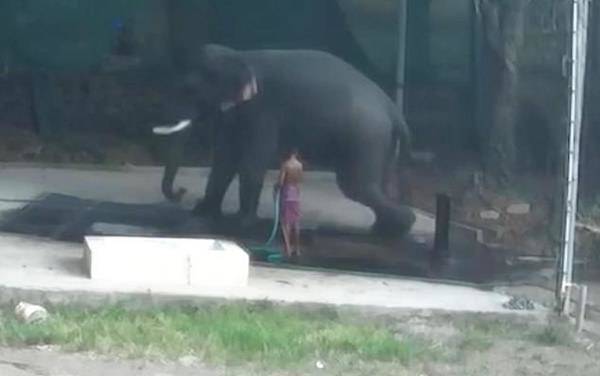 AsiaWireThe mahout and the elephant, before the unfortunate accident.

An elephant trainer and wrangler, also known as a “mahout,” was crushed to death in India after he lost his balance and fell beneath the animal’s torso as it lowered itself to sit.

The accident occurred in Karappuzha, in southern India’s Kottayam district of Kerala, the Daily Mail reported. The 40-year-old mahout, Arun Panikkar, was trying to clean the animal and needed it to sit down in order to do so.

After whipping the elephant with a cane to force it down, Panikkar slipped — and fell in the worst possible spot right as the animal followed his orders. The cause of death, according to the Mirror, was a crushed skull.

Footage of the man’s death has already circulated across social media, with some arguing that he deserved it for whipping the animal and others merely shocked at the gruesome series of events.

“He was standing on the left side of the elephant and instructed it to lie down to that side,” a source told The Hindu. “But the animal initially lay down onto the other side and then suddenly changed to the left.”

As you can see from the footage above, a man off-camera hurriedly runs towards the scene after Pannikar gets squashed by the enormous animal. His efforts at shifting the elephant around and moving it off the dying mahout are futile.

Only when the man uses a big stick to convince the animal to move, does it stand up and allow the man to pull the mahout from underneath. What the man didn’t know at the time, was that the Mahout was killed instantly — confirmed by an examination following the horrific accident.

Though it certainly seems like a pretty open and shut scenario, despite its frustratingly avoidable nature, an investigation into the accident is reportedly underway. The elephant itself was owned by a local hospital trust.

Whether or not the mahout’s family or employer will attempt to seek damages is unclear, with the only known developments being that Panikkar has died and that the elephant belonged to separate parties.