Photo Of The Day: An Emaciated Polar Bear Reveals Its Species’ Grim Future

One photograph paints a bleak future for polar bears throughout the Arctic. 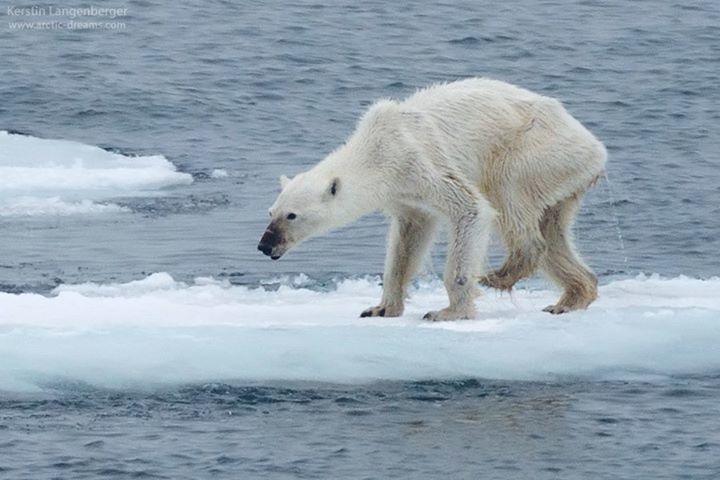 This devastating photo of an emaciated polar bear presents us with yet another ugly view of a climate-changed future. Just this August, wildlife photographer Kerstin Langenberger captured this heartbreaking image off the shores of Svalbard, a Norwegian archipelago in the Arctic Ocean.

The islands that comprise the archipelago are home to one of the world’s largest populations of polar bears. But as rising temperatures melt sea ice, polar bears’ natural environment for seal hunting also diminishes, leaving the bears to hunt for less abundant food sources on land such as snow geese and caribou. Such a shift in diet disrupts the entire Arctic food chain — and can leave the bears quite hungry, as seen above.

Said Dr. Ian Stirling, an Adjunct Professor at the University of Alberta and a member of Scientific Advisory Council at Polar Bears International, in an interview:

“[Polar bears are] kind of in the worst situation in an evolutionary sense. They’re large mammals and they’re very highly specialised to very specific ecological requirements. If the ecology changes, especially if it happens quickly, there’s just simply no time for the bears to even try and adapt. They can’t go out and swim in the open water and catch [seals] so they need that ice and that’s why the ice is critical.”

“If we don’t mitigate our activities and reduce the level of carbon [and] greenhouse gases, the numbers of polar bears in 100 years would be very, very small,” USGS wildlife biologist Karyn Rode added.

Gabrielle Kwarteng
A born and bred New Yorker, Gabrielle Kwarteng is the Social Media Manager for PBH Network. She loves to take street portraits with her Nikon FA and DJ for anyone who'll listen.
You might also like
Remove Ads
×
Follow ati On
Join The All That's Interesting Weekly Dispatch
Like Follow
Posting....